As Patti Fletcher shares in her book "Disrupters: Success Strategies from Women Who Break the Mold", the time is up for gender inequality in the workplace. Sharing the stories of women who broke the mold and created their own models of success, this book is an inspirational collection of stories and insights that show other women how to become a powerfully positive disrupter, no matter what obstacle they face. 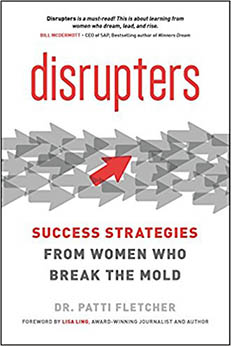 Unlike other books on gender equality in the workplace, Disrupters: Success Strategies from Women Who Break the Mold, doesn’t focus on changing policies or legislation to fix the modern workplace. Disrupters focuses on what women can do now to make an impact. Dr. Patti Fletcher adopts a daring, solution-focused approach that showcases women who are breaking the glass ceiling without waiting.

Disrupters is a book for women who are ready and willing to change the world of work now, rather than later.

What is Disrupters About?

As Dr. Patti Fletcher shares, the full potential of women in the workplace has not been realized. Despite all of the policies, speeches, conferences and op-ed pieces, women are still not even close to being equal to their male counterparts in the workplace. This inequality shows up in the way we talk about women in the workplace, the way we pay them, and the way women communicate with others while at work. It affects almost every aspect of work — and at every level.

Breaking free of these limitations involves becoming a disrupter. If women can’t reach their full potential by playing by the rules, it’s time to break them.

To showcase how disruption looks, the book shares the story of women who didn’t follow the traditional path to success. The women in Fletcher’s book didn’t just work their way up the corporate ladder. They went sideways. They created their own career ladders. They jumped from one career ladder to another. Whenever the women featured in Disrupters faced an obstacle, they found a way around or through the obstacle using what they had.

These women achieved their success, their way.

In sharing the stories and lessons of these trailblazing women, Disrupters highlights the fact that success for women in the workplace is more than promoting a woman to the C-suite. Success for women in the workplace is about disrupting the unwritten script for women at work. It’s about opening more options and closing doors on fixed mindsets that emphasize gender at the expense of potential.

Fletcher shares the stories of these women, not because they are extraordinary (which they are). She shares their stories because she wants their extraordinary experiences to one day become ordinary.

Fletcher is an experienced business executive whose career exemplifies the success discussed in her book. Currently, she works as a writer, speaker, corporate advisor, board member, angel investor and Executive-in-Residence at Babson College.

What Was Best About Disrupters?

Fletcher’s passion for empowering women at work shines throughout Disrupters. It appears when she boldly confronts the lack of progress in the past (and present) regarding workplace gender equality. That being said, this criticism doesn’t dampen her hope about the future of women or their ability to carve out their own place at work. As a result, Fletcher creates a book that is realistic, optimistic, and forward-thinking at the same time.

Like the message behind the book, the format for Disrupters isn’t a linear progression from goal to achievement. In other words, it isn’t a book designed for women who want a quick “how to reach the C-suite in X years” guide. Neither is the book a guide for leaders who want straightforward solutions to creating gender-inclusive policies. Fletcher wants to display how women have reached their current level of success through interviews so that readers can draw their own conclusions.

Disrupters deserves attention because of its unique response to the “women at work” issue. There are many books about gender equality, but they often approach the issue from the same angle. Fletcher’s Disrupters is different. It’s bold, authentic, realistic and clear. Readers get a book that challenges both the individual, the workplace and society as a whole. On top of that, Fletcher’s format of letting the women speak for themselves is also a unique feature. This combination of boldness and narrative makes Disrupters a very unique response to the nagging problem of gender inequality in the workplace.