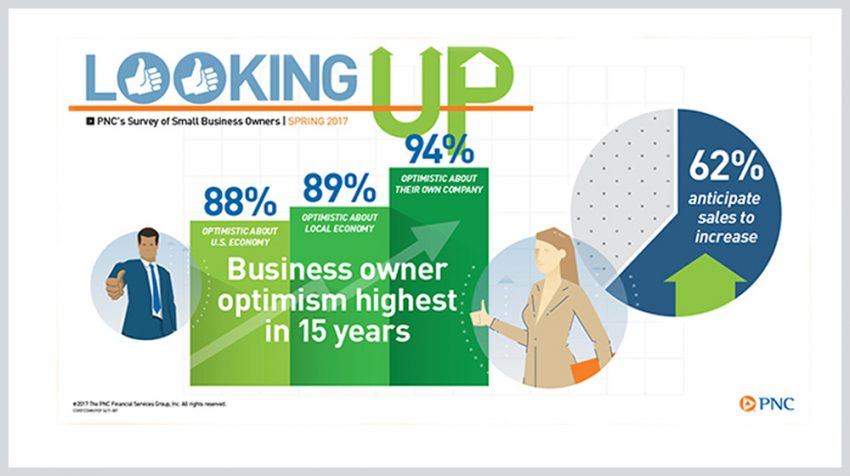 A new report says 61% of small businesses expect demand for their company’s products or services to increase in the next six months. This represents a substantial increase over the 51 percent of small businesses who said they expected more demand for their products and services in the fall of 2017. The increase was on if the takeaways from the recently released Spring 2018 PNC (NYSE:PNC) Economic Outlook.

Overall, the sentiment of the PNC Economic Outlook reported historic highs in optimism since the financial institution began conducting the survey 15 years ago. The results of the latest survey reveal half of the respondents are optimistic about the national economy currently, a 21 percent increase over the 29 percent who reported being positive about the economy in fall 2017.

Gus Faucher, chief economist of The PNC Financial Services Group, Inc., addressed the current economic environment in a press release announcing the results. In the announcement, Faucher said, “The overall findings from our biannual survey, which began in 2003, confirm that the U.S. economic expansion, now almost nine years old and the second-longest in U.S. history, will continue throughout 2018.”

The PNC Economic Outlook survey was conducted by the Artemis Strategy Group by telephone from January 12 to March 6, 2018. The participants were 500 small and mid-sized businesses within the United State with annual revenues of $100,000 to $250 million.

In other key findings, 51 percent of respondents said they believe there is a good balance between the volume of business and the capacity to handle the volume at their forms. However, 64 percent stated they would be adding more employees to meet the demand they are experiencing perhaps explaining a recent hiring boom among small businesses.

Regarding the high rate of optimism, the PNC Survey reports 85 percent of all respondents have positive emotions about what is to come in the next six months. Specifically 39 percent of respondents said they felt hope while 37 percent said they felt enthusiasm about the prospects for their small businesses in the coming months. of the respondents respectively. Still only nine percent expressed feelings of joy. And conversely, feelings of  fear, despair, or anger were also in the single digits.

As to the tax reform passed by the Trump administration, the verdict is still out according to the survey. The majority or 61 percent of  respondents said they weren’t planning to make any changes to their businesses in 2018 in response to the tax bill. This was in great part attributed to their unfamiliarity with the details of the Tax Cuts and Job Act of 2017. Only 27 percent said they understood the specific effects of the Act on their businesses. On the other hand, 43 percent of respondents indicated they expected a positive impact from the legislation, compared to the 5 percent who expected a negative impact, and another 17 who said they believed the impact will be neutral.