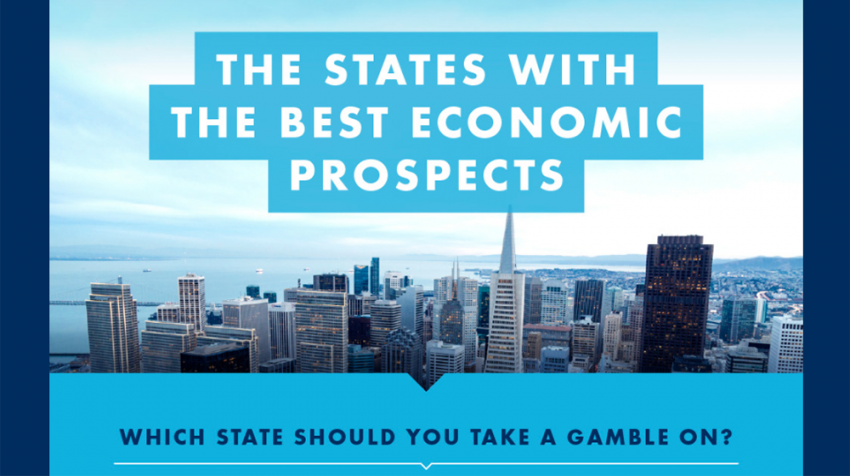 If you haven’t looked at North Dakota for your next business venture, you should reconsider doing so now. According to a new infographic based on research conducted by PlayUSA, the state gets high marks.

The infographic, “The States With The Best Economic Prospects” asks which states you should gamble on when making your decision to set up your life. PlayUSA researched the 10 Best US States for Young Pioneers based on key metrics to determine the best prospects for young entrepreneurs.

For young entrepreneurs and small businesses looking for better opportunities, a new location can make all the difference.

In a release, the company explains,” The economic environment of where you live is deeply connected to your own financial success in life.”

The research was carried out with metrics across the most recent 10 year period available for each state. The percentage growth year-over-year was then evaluated to come up with an average, which was ranked from 1 to 10 and measured.

Six economic metrics were evaluated over the last 10 year period 2007-2017. If this wasn’t available, due to data release, the most recent 10 year period was used, such as 2004-2014. Metrics used include employment, GDP, house price, college admission, household income and number of new businesses started.

States with the Best Economies

North Dakota was number one and it arrived at this spot because of the recent boom in the oil industry before the price hit record lows. But the reversal in oil prices hasn’t stopped the state from growing, making it a great place to both live and start a business.

Low housing and college admission prices make North Dakota a great attraction, along with a high 7.36 percent GDP for the state. And when it comes to unemployment, it has a low 0.81 percent.

Washington and Massachusetts completed the top three with similar GDPs at 4.47 percent and 4.10 percent respectively. The unemployment numbers, however, are vastly different as Massachusetts boasts a great -0.49 percent, and Washington is on the high side at 3.07 percent.

The remaining top 10, according to the research, are California, Missouri, Oregon, Kentucky, Texas, Colorado and Iowa.

You can take a look at the infographic below for a detailed breakdown.