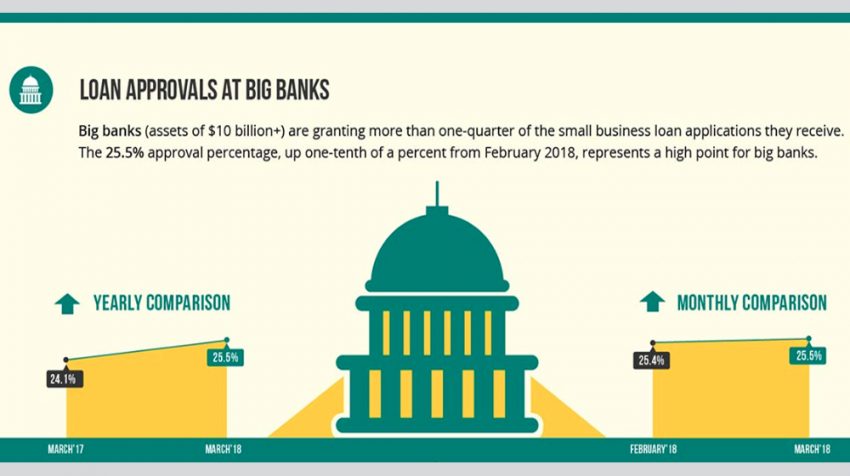 The March 2018 figures for small business loan approval rates at big banks has increased yet again according to the Biz2Credit Small Business Lending Index.

Big banks, which Biz2Credit identifies as those with $10 billion + in assets, have delivered a 25.5 percent approval rate for the month. This is a one-tenth of a percent increase from February, an upward trend which started in May of 2017 and is still going strong.

The high approval rate from big banks is a good economic indicator. They now see small businesses as being more profitable, which means they are willing to invest in them as they grow with the economy.

Biz2Credit CEO Rohit Arora, who oversees the monthly report, explains why big banks are increasing their stake in small businesses. In a prepared statement, Arora says, “With the Federal Reserve’s continuing path of interest rates increases, small business loans are becoming more and more profitable. A small rate hike means tens of millions of dollars in profit, since the big banks cost of capital has not changed.”

He goes on to say, the large deposit base of big banks, as well as a strong economy, are pushing them to be more aggressive in their lending to small businesses.

The data for the March index is derived by analyzing more than 1,000 credit applications from small businesses on Biz2Credit.com. The Index looks at small business financing requests at big banks, local and regional banks and non-bank lenders including credit unions, Community Development Financial Institutions, micro lenders, and others.

The number of approved small business loans for regional, community banks and other small banks was down two-tenths from February. They approved 49 percent of the loans requested compared to the 49.2 percent for the previous month.

According to Arora, the tax season and related issues are responsible for the lower number. The decline is an annual occurrence, and he expects the approval rates by small banks to pick up in May when the tax season is over.

Institutional lenders, however, were not affected by the tax season, as they achieved a new record in the index of 64.5 percent, up one-tenth of a percent from February. Institutional lenders now play an important role in small business lending, according to Arora.

He explains, “Just a few years ago, they were not very involved in small business loans, but they have learned that it is quite profitable and the risks of default have been quite low. These lenders offer attractive interest rates and terms.”

Approval rates for alternative lenders were down to 56.5 percent from February’s 56.6 percent, which is a continuing trend for this segment. The downward trend has been going on for two years now, except for a slight growth in November 2017. These lenders often offer higher interest rates and less favorable terms for the funds they provide, but they can make cash easily available to a small business, even when their credit is not great.

Credit unions also dropped one-tenth of a percent compared to February, approving 40.1 percent of the applications they received.

You can look at the infographic below to compare previous rates.