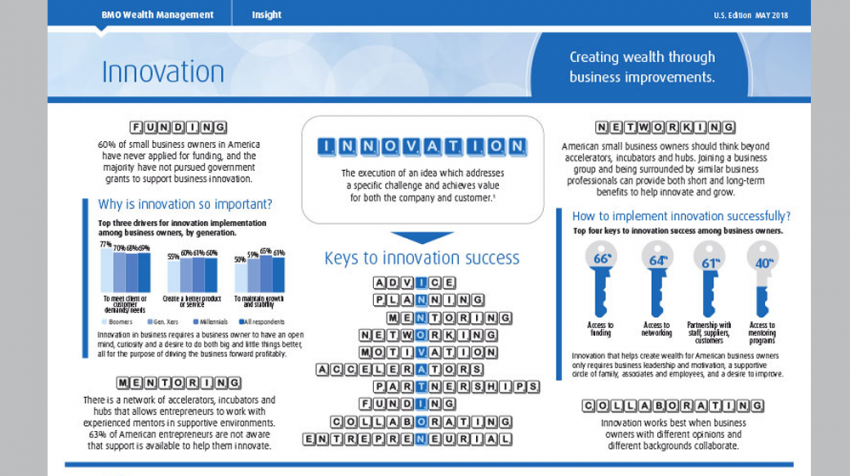 With the development of digital technology and advances in smartphones, apps, artificial intelligence, and social media to name a few, small businesses have to support and implement the latest innovation as quickly as possible. According to the report, innovation drives financial success for businesses of any size.

This is especially true for small businesses because the right innovation allows for the creation of new products, services and marketing as well as ways to reach consumers. In addition to the improved external capabilities, it also makes internal teams more productive.

Even if small business owners would like to innovate, they are often either unaware or not capable of accessing the funds they need. In a press release announcing the results, Tania Slade, National Head of Wealth Planning at BMO Wealth Management (U.S.) explained the importance of access to information for small businesses.

Slade said, “Having access to information about funding options and support networks is essential to the continued success of a small business, particularly in its early stages. Business owners who take advantage of the numerous resources at their disposal have an immediate advantage, and a far greater chance of seeing their innovation initiatives realized.” The challenge is funding, but small business loan numbers are looking much better today.

The report comes from a survey conducted with the participation of 1,021 small business owners across the US. They were asked about keys to innovation success, experiences funding their innovation through business loans and grants, and knowledge of and participation in accelerator and incubator networks.

As to the 60 percent of small businesses which never applied for funding, owners gave a number of explanations for never seeking the capital they needed. More than a third or 36 percent said they didn’t want to incur additional debt, while 22 percent believed they would be rejected. Another 21 percent stated the process was too complicated.

Alternative sources of funding were also explored in the survey, including government grants and incubator and accelerator networks.

When it came to government grants, 34 percent of responding small business owners said they were not aware grants were available. Of a reported 44 percent who did know, they didn’t know where to apply.

The number of small businesses who were not aware of incubator and accelerator networks was high — 63 percent. And there was also a gap in this knowledge between men and women. Specifically, 72 percent of women entrepreneurs said they weren’t aware of funding options  from incubator and accelerator networks while only 54 percent of male entrepreneurs seemed unaware.

Why is Innovation Important?

The number one reason given by small business owners for implementing innovations in their organization was to meet the needs of clients. Sixty-nine percent of respondents gave this as the reason for innovating. Meanwhile, 61 percent said innovation was important  for maintaining growth while 60 percent said it was necessary to create a better product.

The report further indicates older entrepreneurs looked to improve the client side of the business, while their younger counterparts were focused on creating better products or services.

So how do small business owners continue to innovate? In the report, BMO makes the following suggestions:

In today’s highly competitive and technologically evolving economy, small business owners can’t stop innovating. As the report rightly points out, “Innovation should be a never-ending process.” And getting informed is the best way to do it.

You can see some additional data from the report here.