Klout, a Social Scoring Platform Businesses Never Warmed Up To, Will Shut Down After May 25 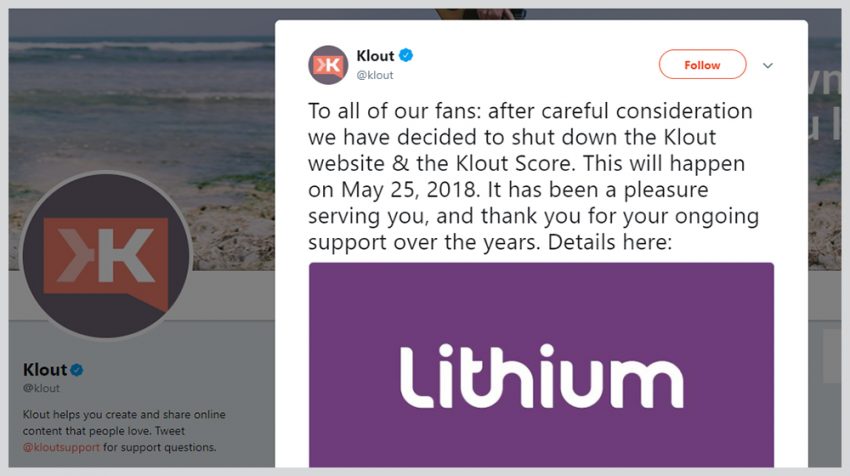 Klout had a great concept, so much so Lithium Technologies paid in the neighborhood of $200 million for it in 2014. Fast forward four years later, and Lithium has announced May 25, 2018 is going to be the platform’s last day.

Why is Klout Shutting Down?

So what went wrong with the social media scoring system Klout created? The CEO of Lithium, Pete Hess, did little to elaborate on the official Lithium Community blog. He said, “Klout as a standalone service is not aligned with our long-term strategy.”

Klout had issues with privacy and how it used the data of its customers. And as the EU’s GDPR is set to take effect on May 25, which coincidentally is the last day of Klout, one has to ask the question, how far it could have gone with this model?

The downfall of the company is related to issues of privacy, data protection and not being able to capitalize on its initial idea by fully addressing businesses, especially big brands.

To all of our fans: after careful consideration we have decided to shut down the Klout website & the Klout Score. This will happen on May 25, 2018. It has been a pleasure serving you, and thank you for your ongoing support over the years. Details here: https://t.co/xCNdYachxF

Klout was founded in 2008-09 by Joe Fernandez and Binh Tran. The application used social media analytics to measure the importance of users with its 1-100 Klout Score. This idea grabbed the attention of investors and the company had four rounds of funding totaling $40 million.

In order to give the score, Klout measures multiple sets of data from social networks and other real-world data, including Wikipedia. Using its algorithm, which many people found dubious, a score is generated.

Science fiction author John Scalzi later lampooned the process of scoring individuals. Scalzi wrote, “I could rank your influence online. If you like: I’ll add your number of Twitter followers to your number of Facebook friends, subtract the number of MySpace friends, laugh and point if you’re still on Friendster, take the square root, round up to the nearest integer and add six. That’s your Scalzi Number (mine is 172). You’re welcome.”

This and worse criticisms led to a low adoption rate among businesses, but the platform was used by some companies to identify influencers on social media. For influencers, who have now become an industry themselves, the scoring system had a lot of potential. But Klout didn’t take advantage of the traction it was getting early on and problems with its scoring system didn’t help.

The company rolled out Klout for Business in 2013 with the goal of helping brands with business analytics so they could learn more about their online audience. But little is known about the success of the rollout, and a year later Lithium had purchased the company.

Even though social media ranking didn’t pan out for Klout, Lithium is not totally abandoning the concept. In his post, Hess said the company is “Planning the launch of a new social impact scoring methodology based on Twitter.”