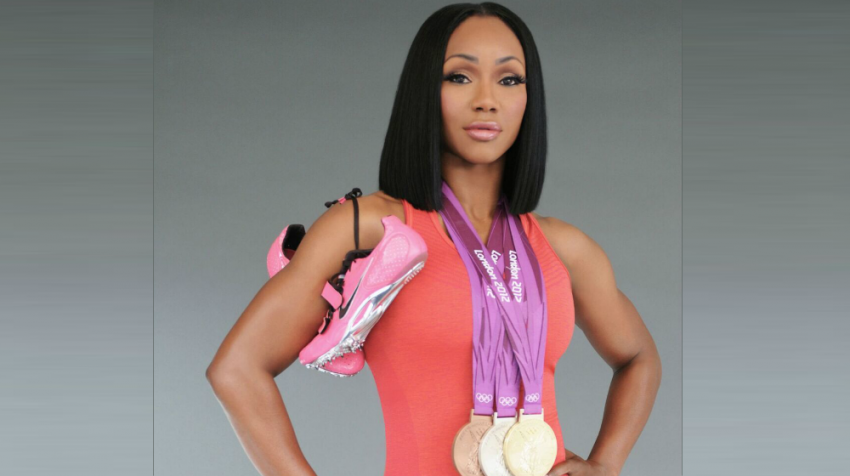 I caught up with 2012 Olympic gold winner for the Women’s 100 meter Carmelita Jeter at BPM’Online’s user conference, Accelerate, yesterday in Boston.  And her being the fastest woman alive having run the second fastest 100 meters ever in women’s history, that’s the only way I would’ve ever caught up to her …

After her conference keynote, I had the great pleasure of asking her a few questions about some of the obstacles she overcame in becoming the fastest woman alive, how the lessons of teamwork she learned as captain of the Olympic gold winning US women’s relay team apply to the business world and how she was able to win a bronze medal while running on a leg with a torn quad muscle.

Below is an edited transcript of our conversation.  To see the full interview watch the video below, or click on the embedded SoundCloud player.

Small Business Trends:  We’re both here for this conference that the folks at BPM’Online are putting together and the whole theme around the conference is accelerate and acceleration. So I thought it was pretty fitting to have you come in and be part of the keynote but before we talk about that, maybe you can give me a little of your personal background.

Carmelita Jeter:  I’m a graduate of Cal State, Dominguez Hills – Division II school. Made my first Team USA in 2007. I ran for Nike from 2007 to 2016. I have three Olympic medals from the 2012 London games. A world record in the 4×100 Relay. In 2011, I was World Champion. So I’m a World Champion, Olympic medalist, World Record holder and fastest woman alive. Only other woman to run faster than me is Flo Jo (Florence Griffith Joyner).

Small Business Trends: That was 1998. That’s amazing. That’s 30 years and it’s still just you and her.

Small Business Trends: Did you ever imagine when you were growing up that you would actually be the fastest woman alive?

Carmelita Jeter: Not that I would be the fastest woman alive but I did always imagine that I would be on the Dream Team. I grew up playing basketball so when you grow up playing basketball you think Magic Johnson, Michael Jordan, Charles Barkley. You think all of these amazing athletes and you think of the Dream Team.  But I just ended up making my own dream team on the Olympic team for track and field, so definitely a different sport but still the same mindset, still the same attitude, still the same goal.

Small Business Trends:  One of the things you talked about is team, and how you can have the four fastest women on the same team but that doesn’t necessarily make you the best team. Maybe you can talk a little bit about the importance of heart and chemistry to the success of the team?

Carmelita Jeter: Many times people think you just pick the four hot people, the people that are just doing their thing right now. Just because you pick the four best athletes at the time or even the four best people that you feel can really run your company, that doesn’t actually mean that they’re going to be able to do it together. You’re dealing with different personalities, different egos, different mindsets and sometimes everyone’s not gonna think the same. They’re not gonna want the same thing. The goal in the end is not for the team to win for some people. The goal in the end is just for them to win. You have to make sure when you’re putting a team together — hear that word team –the team has to have the mindset of, “We are going to win” instead of “I” and “Me”. It’s hard to build a winning team around people that don’t think the same.

The team that we put together in 2012, one of our runners, she was not one of the fastest people to be on the squad but you know what? She had heart. She had drive. She had determination. We knew that she was going to bring that stick around and many times when you’re picking a team, you need to pick a team who you’re gonna trust, who’s gonna get the job done, who’s gonna make the deadline, who’s not going to come with an excuse of why they couldn’t do it. You have to be willing to say, “Okay let me pass this baton off and know that the other person is gonna do their job and then they’re gonna pass it off and then they’re gonna pass it off …”

When you’re running a relay, you’re running blind. You run. You drop your hand back. The person’s there. They put the stick in your hand and you run. It’s the same thing when you’re doing business and you’re in the office. You’re doing things blind. You’re not sitting over that person’s shoulder watching them do their work. You’re hoping and praying that they get their job done and that’s the same way with a 4X1 relay. You’re just not on the track. So when you’re building a winning team, a world record team and that translates in the office as well because at the end of the day you want your business to be the best. You want to be the winning business, the gold medals. Everybody wants to work there. Everyone is talking and thinking of you when they’re thinking of the field that your business is in and it’s the same. You want to pick a winning team.

Small Business Trends:  So you’ve won Olympic gold as a team member but also as an individual. Compare contrast how you felt with both, having a successful team but also having your own success as an individual?

Carmelita Jeter:  Well individual is a little bit different. You take that win differently because you did it. You did it, you were the only person in that lane and you made it happen. To get a gold medal in a relay, you have to look at it in a totally different light because you have to step out of what you’re normally used to doing. You have to be comfortable with other people. You have to understand that it wasn’t all about you. So, to be a team player, it’s a different medal that you receive because it took four people to get it done and it took four personalities and four attitudes and just four different people to make it happen. So you take it a little differently because you had to physically, mentally, emotionally … I’m not gonna say not be yourself but you had to be a better version of yourself with other people.

Small Business Trends:  One of the things that really caught my attention during your speech, you ran with a torn quad, you didn’t just run like just jogging, you were in trials. You ended up getting the bronze, third place. When you were thinking about this, were you just thinking I just wanna finish or were you actually thinking “You know what, I still think I can win”?

Carmelita Jeter: First I was thinking, let me just get past the first round. Then I can think about it. Many times we set too many goals ahead of a goal, ahead of a goal instead of going straight to that goal and then saying, “Okay since I got to this goal, now let me go to the next goal.” And so my first goal was, “Okay, let me make it through the first round” Then my next goal was, “Well let me make it through the final” And then, “Well let me go on this podium” And so I set a different goal every time I finished racing because the leg was gone, I couldn’t say I’m making this final, I’m getting on this podium, that would have just been a little crazy because the leg was gone. I had to set my goals day by day during that time and many times we have to do that in life. We have to set our goal day by day, sometimes people set too many goals and then you’re frustrated and you’re upset but you did that to yourself. You set all of these high expectations and unfortunately you weren’t able to meet them at the timeframe that you wanted.

Sometimes we put time and we put everything so close together instead of giving us a chance to at least hit the first goal. Then give yourself a little more chance to hit the second goal.

See Also: 5 Retail Automation Trends that Can Turn Your Business to Gold

Small Business Trends:  You’ve competed at the highest level but those days are past you now, what do you miss the most about those days and those times and what are you doing now to fill the void; that allows you to think, “I’m able to apply some of the stuff I did back in the day now.”

Small Business Trends:  You basically left it all on the field.

Small Business Trends:  What gives you that feeling of success now, is it when you see the folks that you talk to, that you mentor… when they start to succeed, do you feel like, I remember this feeling from back in the day?

Carmelita Jeter:  Definitely.  When I’m mentoring athletes or coaching athletes and they do something amazing and they turn to me and they give me that look… You can’t even describe it. it’s just a feeling that an athlete has because I know what that look feels like. Even when I’m motivational speaking and so many people came up to me in this conference and they’re saying amazing things, it’s crazy how you can put track and field and athletics with business and tech.  I feel so motivated, I want to go and do this. That right there is a whole other feeling that I feel now. Just because I’m not on the track doesn’t mean that I’m not making you great.

Small Business Trends:  The other couple of things that stood out to me is when you said, “You can’t finish if you don’t start.”

Small Business Trends:  You mentioned the mindset, especially going back to the torn quad. You said, at some point during those races your body was gone but my mind was savage. Is that something that was just innate in you or is that something you learned, how did you develop that?

Carmelita Jeter: I believe it’s a combination. It’s a combination of growing up and wanting things and wanting to do things amazing.  Then it was a combination of failing at things, knowing how that feels to fail and knowing what caused the failure and then wanting to go and fix it. It’s a combination of things and then being a person that’s extremely confident, sometimes people confuse cocky and confident, and arrogant and confident. It’s two totally different things. To be confident, you can just walk in the room and everyone knows it’s you, to be arrogant you walk in the room with a certain walk and a certain this and a certain that, it’s a big difference. One thing I’ve noticed with myself is that I’m extremely confident, whatever way you take it is how you take it, but I know how I’m dishing it and I’m dishing it with confidence, I take that confidence into everything that I do so when you said my mind, it’s part of my confidence too. All of that goes into play.