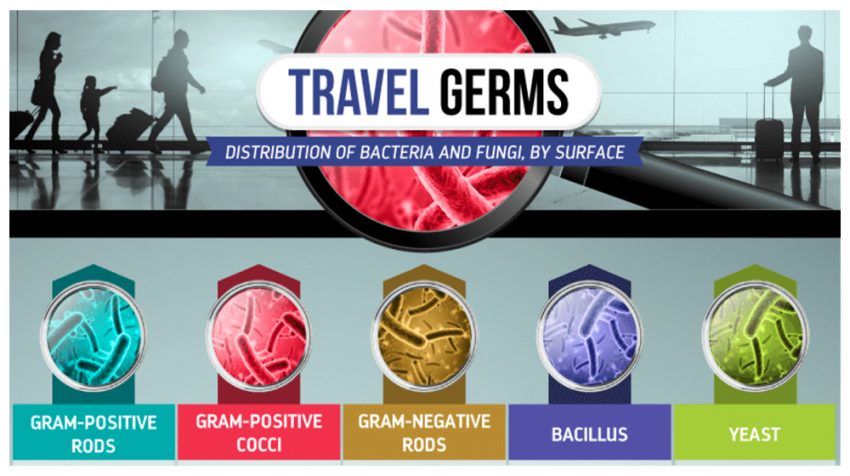 Business travel has increased, with an estimated 1.3 million business trips occurring each day in the U.S. An equally staggering number of small business owners fly the friendly skies for business purposes each year, including flying to meet a client, attend a conference or just to explore new markets for expansion.

According to Austin, Texas-based online insurance provider InsuranceQuotes.com, the increased number of business travelers and increased foot traffic through airports over the past nine years has increased the germs brought in by passengers and left waiting for their source of transportation: you.

InsuranceQuotes conducted a study to determine the average number of viable bacteria and fungal cells per square inch, or colony-forming units across three major U.S. airports and airline flights, including the Hartsfield-Jackson International Airport in Atlanta. The insurance provider did 18 tests of six airport surfaces during the busy holiday season, and the results were eye-opening.

Apparently, the number of germs found on some airport surfaces were recorded at over 1 million colony-forming units. In comparison, an average of only 172 colony-forming units (PDF) are found on toilet seats. Needless to say, many types of germs and bacteria (not all types) can make you sick and ruin your business trip.

Some of the dirtiest and most germ-laden surfaces at airports were identified as the self-check-in screen, airline gate bench armrest and water fountain button. One airline self-check-in screen recorded over 1 million colony-forming units, with the average being 253,857. The average colony-forming units on airline gate bench armrests and water fountain buttons was 21, 630 and 19, 181 respectively.

Inside airplanes, the most germ-filled surfaces were identified as lavatory flush buttons, seat belt buckle and tray tables. Yuck! Of all the germs and bacteria in airports and airplanes, the most helpful, disease-fighting bacteria were most likely to be found on airport water fountain buttons, making up 59 percent of colony-forming units.

Even if airport and airplane surfaces are cleaned regularly, general cleaners are usually used rather than stronger disinfectants, leaving dangerous germs present, says the insurance provider. In this case, it may be necessary to carry sanitizers with you on all business travels.

Check out InsuranceQuotes’ infographic below highlighting the dirtiest surfaces on airports and airplanes, as well as the types of germs and bacteria you are likely to pick up there: