Steven Carse of King of Pops: Supporting the Local Community is Good for Growing a Business

At last week’s Xerocon event I had the pleasure of meeting Steven Carse, who cofounded King of Pops with his brother.  And what started as a natural ingredients popsickle company with a single cart in 2010 has turned into a company employing upwards of 250 people spread across eight cities in five states.

Steven shared with me how being laid off from his corporate job led to him discovering his business opportunity, how the importance of being involved in the community is key to understanding customers, and how an employee who brings his ukulele to work with him is a good fit for the company.

Below is an edited transcript of our conversation.  To hear the full interview, watch the video below, or click on the embedded SoundCloud player. 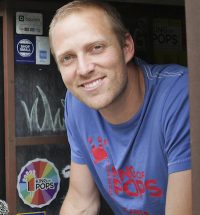 Small Business Trends: Tell everybody what King of Pops is.

Steven Carse: King of Pops is a popsicle company, but we think it’s a much better product. Instead of artificial flavoring and just different bright colors, it’s real fruits, interesting combinations. We try to bring it to people in a fun way, so we’re out around town in a lot of events where you’ll actually be, and then we do a lot of catering as well, like if you’re having a party for your office, or things like that.

Small Business Trends: You started this business with your brother?

Steven Carse: Yeah, 2010, I had just gotten laid off from my corporate world job and had fallen in love with this idea with my other brother who’s an anthropologist, and I was visiting with him down in Latin American and in Mexico and Panama all through college. It’s what I would do for my vacations, I’d go wherever he was. He turned me onto the paleta, which is the Spanish word for popsicle. I had fallen in love with that product in college when I didn’t really think anything of it. Then when I was looking for something new to do, it just kind of made sense, like why not try to do this? Then my brother, Nick, who is my business partner, he was a lawyer at the time, and liked it but didn’t love it. We decided to go for it together.

Small Business Trends: What makes that flavor of Popsicle different than what you traditionally get in the United States?

Steven Carse: It would be really simple, but seasonal, and hopefully local, ingredients. It’s not going to be as sweet, so there might be sweetener added, but it’s not going to be super, super sweet. No artificial colorings or anything like that. Then interesting flavor combinations, so you can definitely get raspberry lime or strawberry lemonade, but we also do more interesting things, like blackberry ginger lemonade or a grapefruit mint or tangerine basil.

Small Business Trends: I had one of those today. It was good, by the way. Tell us a little bit about the business model, because it’s really fascinating how you guys are setting up and how you kind of move where the people are.

Steven Carse: We started as a pop company with a single pushcart about three feet by two feet on a street corner in Atlanta. That just happened because we didn’t have enough money to get a brick-and-mortar going. It was a really good blessing because instead of being tied to that one spot, we could go wherever the people were. We quickly found out how to find the events around town and grew in three different ways. We do a lot of B2C, so we sell directly to people a lot, we do a lot of B2B where we’re selling to businesses, and they’ll give it out to people maybe in activation or something like that, and then we also sell in Whole Foods and the grocery angle.

What started as a pretty simple business, I mean it’s still simple, everything is as complicated or as simple as you want to make it, but has been a lot of fun. We’ve added some channels. We have a farm now west of the city where we grow a lot of our own ingredients. We’ve got a distribution company where we distribute our own product along with some other like-minded food brands from the South. Then we also most recently have started King of Pops bars where we serve “poptails”, so popsicles go really well with cocktails. Instead of having your ice in there and it will kind of dilute the drink, you put a popsicle in there and it can enhance the drink. That’s been fun. Every year, it’s something new.

Small Business Trends: How do you keep up with your customers, the folks that end up buying a pop on the street, so to speak? How do you stay connected and begin to build a relationship around that?

Steven Carse: We start with hiring people that are, we think, people will be interested in talking to at the cart. There’s so much competition in social media and newsletters and all those places, and we do all of those. You kind of have to do them, so that’s one way that we’re doing it. We try to be really active in the community through hosting events, so we’ve got a yoga event in each of the cities that we’re in that gets between 200 and 700 people on a weekly basis. We have a run club. We’ll have different events throughout the year. We keep our community engaged through those events, in addition to all the other stuff. Social media is super important. It’s how you can keep people always up to date with what you’re doing and keep the conversation going. We really like the person to person contact.

Small Business Trends: You mentioned that in a lot of cases, you figure out where you’re going to set up for the day, and then you got to let people know, “Hey, we’re here.”

Steven Carse: Yeah, for sure. When we first started in 2010, we would just post a picture of our menu on Twitter, this is where we’re at, and social media was novel enough where people were excited. They’re like, “I can finally use Twitter for something.” They would go and find us. Now it’s so busy, so if you just post a picture of your menu, no one’s really going to see it unless there’s a story associated with it, so we’re always searching for cool stories and things that people will be interested in finding. That’s the key.

Small Business Trends: You also mentioned that your employees, they have to have a certain kind of mentality and outreach ability in order for this to work.

Steven Carse: Yeah, our expectations are a little bit different. You think about Chick-fil-a, they’re like the gold standard of this great service, or like a fast food restaurant, but their role is to fit within a mold. What I really am proud of with our company is, certainly there’s expectations if you’re going to a certain place you can’t wear a cutoff tank top or whatever, but you can certainly be yourself and it’s encouraged to bring whatever you’re interested in to that world. It’s a pretty free flow. It sounds cliché, but there’s a guy that brings his ukulele to the cart and plays it. It’s just that kind of vibe, where it’s just laid back. People can have fun. I think when they’re having as much fun and being themselves, it really translates.

Small Business Trends: You mentioned you had upwards of 250 people working in different locations that you’re at. How do you manage? How do you keep up with that?

Steven Carse: It’s tricky. We use some good scheduling software. Then on top of that, there’s a lot of ways to do this now, but we use a product called Office Vibe that gives them the opportunity to anonymously answer a bunch of questions. It’s a good learning. People say what’s bothering them, like the stool is not comfortable. Okay, you wouldn’t have maybe heard that if we weren’t listening to it.

That’s tough. That’s definitely the hardest part. Managing people is just a quotient of how much you care. The more you care about the people, the harder it is, because it’s easy to just say, “Go do that.” If you want to make it something that they at least care about, I’m under no illusion that everyone that comes in the door wants this to be their career, and da da da da da, and that’s okay. That’s the way it should be, but really have to put a lot of time and energy in taking care of people.

Small Business Trends: You mentioned that you’ve been using Xero for about four years now. How does using something like Xero help you grow the business to where it is today?

Steven Carse: Kind of what I talked about earlier is we’ve opened new businesses. We started with a single city, now it’s King of Pops Atlanta, then we opened a new account, King of Pops Charlotte, and that’s a new business. It’s got a new set of books. Each entity, we have about 10 or 11 different entities, are all on a different Xero, I don’t know, account, whatever, and they talk to each other really well. That works really well for us. It’s just been an easy way for us to scale it and to always be in touch. You can pull up your phone and look at stuff. We use the quotes in the invoicing for our whole catering business, and some of the functionality and visibility of if people have viewed a quote or viewed something, it’s definitely helpful.

Small Business Trends: Cool. What are the plans for the future? Are you going to be branching out to more cities?

The plans are definitely keep growing. We’re not going out and looking for VC money or anything, but keep growing like 10% to 20% a year. We just signed on with the stadium, so we’re at SunTrust Park, and we’re in the Greenville Drive, and we’re in Nashville Sounds, so we really like the idea of being … it’s just another way to directly interact with the customer. We normally have a rainbow umbrella on our carts, but we wear the rainbow umbrella hats for the guys that are walking up and down the stands, so that’s kind of fun. There’s a lot of room for growth there, and I mentioned earlier we’re opening up some brick and mortar really small bars, but where we can take care of your kids by getting them a pop and then if you wanted to have a cocktail or a beer, you could.

Steven Carse: It’s not like the place you’d go to drown your sorrows. It’s more the place just like, it’s a fun, upbeat, bright place.

Steven Carse: We’ll be there. We’ll be opening a few of those in the next few years, and that’s kind of a big exciting thing, a step for us.