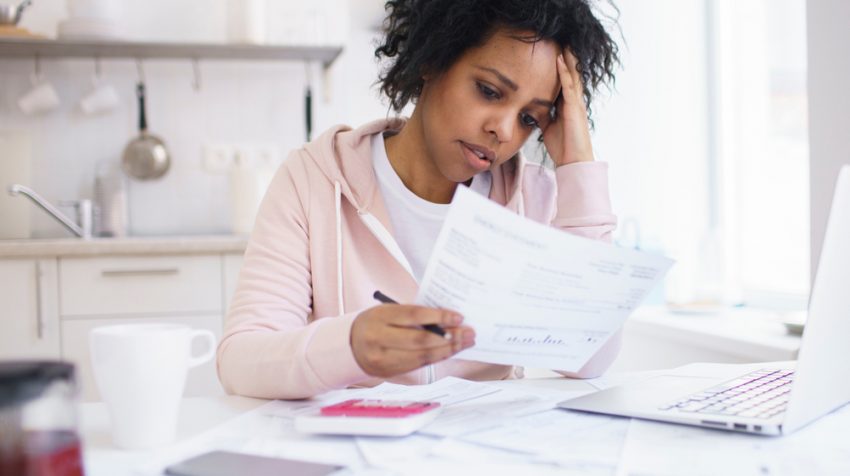 Massive student loan debt is having a crippling effect on the U.S. economy. According to the United States Federal Reserve, 44.2 million students owe $1.52 trillion . This amount is growing by $29 billion a quarter.

Student loan debt now surpasses all other forms of debt except mortgages. College debt exceeds what is owed for vehicle loans and on credit cards.

There is no consensus on how this debt burden impacts small businesses; however, it must affect buying decisions. It also lowers credit scores and reduces the ability to qualify for credit cards and loans for other purposes.

Saddled with debt, fewer can qualify to buy a house or a car. Lower home ownership reduces retail spending on furnishings and improvements. 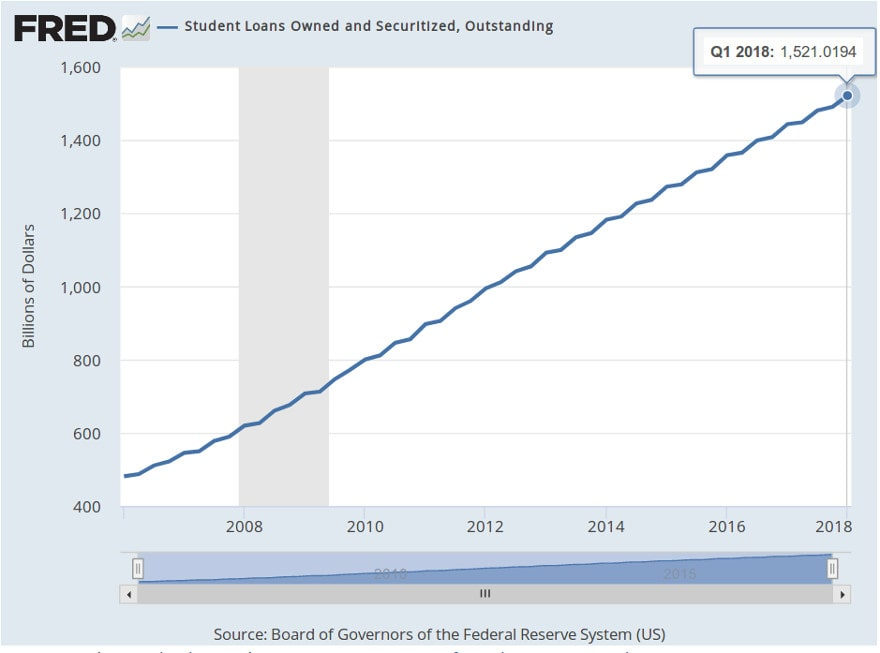 Nearly 40% Of Student Loan Borrowers To Default By 2023

Brookings Institute analyzed new data released by the U.S. Department of Education in October 2017. They estimate that:

Students who are already struggling to pay their loans need to be proactive. No matter how overwhelming it may feel, they need to have a plan to get on top of them.

Make a plan to pay off loans as quickly as possible. Get professional advice on which loan(s) to pay off first and which repayment plan to use.

Cut back on expenses and do whatever is necessary right away. The longer borrowers wait, the worse it will get due to compounding interest.

Borrowers unable to pay the loans off quickly should look into restructuring, refinancing, or consolidating student loans. This is especially true if the payments are already in arrears.

The benefits of consolidating multiple student loans into one payment include reducing the interest rate and lowering the total monthly payment.

Do not listen to advice to defer loan payments or use forbearance because that will only result in the amount owed ballooning out of control.

Colleges have a conflict of interest that causes them to push forbearance. They can lose their financial aid options if too many of their students default in the first three years.

Doing Nothing is NOT an Option

In this article for Fortune by Jim Rogers and Robert Craig Baum, they wrote:

“The higher education bubble (one-sixth of the U.S. economy) will likely burst with the force of all previous catastrophes combined — a shock wave so sudden, so large, that it gathers the full force of the savings and loan, insurance, energy, tech, and mortgage crashes, creating a blockbuster-level perfect storm.”

Just as borrowers need to immediately take action to prevent defaulting on their loans, policy makers must choose to act sooner rather than simply wait for the crash.

What Congress and President Trump decide to do can affect what happens. To get an idea what might happen politically, review President Trump’s publicly stated policies on higher education.

Consumer protection safeguards that apply to all other types of loans do not protect borrowers of student loans.

This is especially concerning due to the age and lack of financial sophistication of most college students. Interview after interview reveals that they focus on just getting into or staying in college.

They rarely look closely at the terms. And most do not understand the effect compounding interest will have on what they owe. Here is a typical story:

Student loans are the only type that can almost never be discharged in bankruptcy. Law changes in 1976, 1998, and 2005 made it increasingly more difficult.

However, recently some judges have opened that door a crack for extenuating financial hardships. Conditions for proving hardship vary by federal circuit.

Judges have sometimes sought to help debtors by cancelling private student debt from unaccredited schools. Some have encouraged attorneys to represent debtors pro-bono.

Others have modified tax obligations on debt relief programs. People who become permanently disabled can request loan obligations be cancelled.

Missing payments on government loans can result in wages, tax refunds, and even social security payments being garnished.

The Impact of the Student Loan Crisis

Spouses may be saddled with college debts if it is a private loan in a community property state. But that usually will not happen if they weren’t married when the debt was incurred and their name is not on it.

Students are putting off marriage and family formation because they do not want to burden a potential spouse financially.

Even death may not end student loan debt. Cosigners are on the hook for the balance. The death of the co-signer or the student can result in a demand for immediate payment. So look into using a co-signer release with lenders who  provide that option.

Federal loans can be discharged at death. Survivors simply need to present a certified death certificate to the loan servicer.

For Parent Plus Federal loans, the death of the parent or the student permits discharge of the debt. As a result, the amount paid off is taxable income which could create a sizeable tax due.

This staggering debt has taken away the buying power of some percentage of 44.2 million students. The result is they:

Student debt does not only impact the debtor. It impacts their families, small business incomes, and all of society.

People burdened with these levels of debt may be less able to start businesses. But some argue that it is the economy, not the debt causing the decline in businesses owned by Millennials.

What is going on in higher education is out of touch with reality. It is breaking the laws of supply and demand and creating a huge bubble that is bound to burst.

Easy money has a history of doing that and this is no exception. Tuition has quadrupled compared to even health care because students could easily borrow whatever the increased cost.

The number of college graduates far exceeds the careers available for them. Most degrees can never produce a positive ROI because the careers do not pay enough to cover the debt.

On average, about 45% of college students fail to complete their degree on time or at all.

When students incur huge debts and then are unable to land a position related to their college degree, society may end up supporting that debt and the poverty it can cause.

Why Student Loan Debt Will Continue to Climb

The debt can only continue to climb without policy intervention. This is because of how student loan payoffs are structured and the ever-increasing cost of a college education.

Financial aid expert Mark Kantrowitz told Marketwatch: “Student debt has a slower repayment trajectory than credit-card or auto-loan debt because it is repaid over decades instead of months or years”.

He also estimates that 1 in 6 students leave school with debt that exceeds their income. The impact falls heaviest on students who fail to graduate.

Too many choose the wrong repayment plan. For Federal loans, there are seven different variations.

Use the repayment calculator linked from that page at least annually and switch plans whenever that will be beneficial. There is no cost to do this.

Anyone employed by a non-profit or the government may qualify for loan forgiveness after 10 years under the Public Service Loan Forgiveness Program.

Nerdwallet warns not to assume a forgiveness plan will be best. In reality, it can sometimes end up costing more under one of those plans than with other repayment plans.

Be sure to run the numbers. They state: “Loans discharged through Public Service Loan Forgiveness are not taxable, but debt forgiven through income-driven repayment plans is taxable.”

So consider both the amount of repayment and the effect forgiven debt will have on tax obligations. Share this SmallBizTrends post that spotlights how the Student Loan Club can provide support on how to best deal with these loans.

What Would Happen If $1.4 Trillion In Student Debt Was Cancelled?

A February 2018 report “The Macroeconomic Effects of Student Debt Cancellation” from Levy Economics Institute of Bard College estimates that cancelling $1.4 trillion in student debt could:

Some argue that student debt needs to be forgiven for the sake of the economy.

There is not one solution to the existing or future college debt. First, parents need to realize that assuming a college education is the best path for every person is incorrect.

The days of getting a degree and going to work for a corporation and working there until you retire were over in the mid-1970s. That world simply does not exist any longer.

There are conflicting reports regarding whether we need more college educated workers or fewer. Regardless, many would be far better off going to trade school or becoming an apprentice. 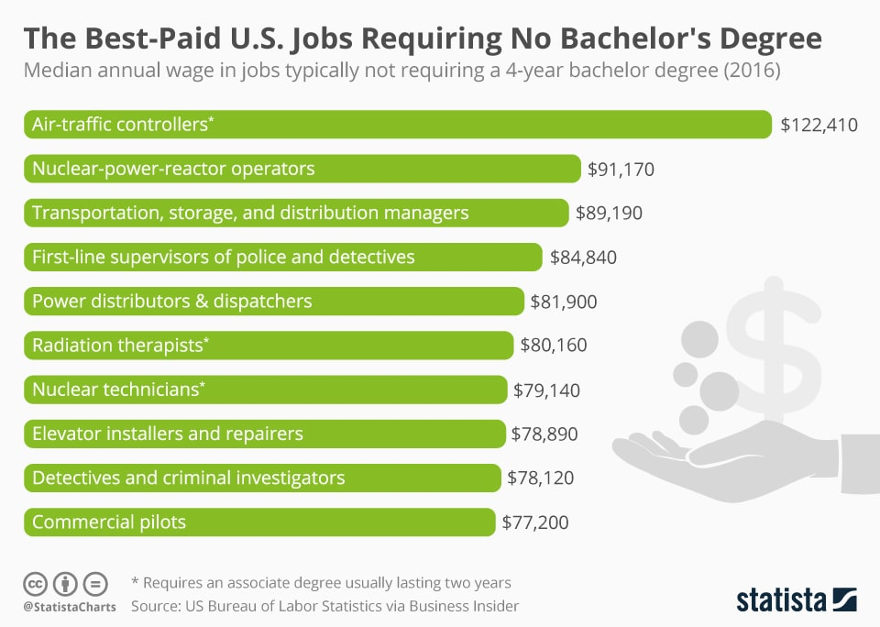 For those who are going on to college, choosing majors likely to lead to actual employment related to their degree is critical. Do not assume — check the current research.

Often, what seems like a reasonable major to pursue financially actually has little demand or a surplus of unemployed applicants who have already graduated.

Some colleges and universities are offering income-based tuition programs. Repayment rates are calculated based on what graduates are actually earning.

The unemployed and those unable to work for any reason may not be required to make payments. If they are underemployed, the payments are on a sliding scale based on income.

Colleges need to be held to higher standards. Too many colleges and degrees are not worth what people are paying for them.

Employers need to stop using a college degree as a litmus test for eliminating applicants. Attitude and aptitude are far more important than most college degrees.

They need to be willing to pay salaries high enough to support the student loan debt or stop requiring them for no valid reason.

When there are insufficient high-paying jobs for the number of college graduates, consider that it may simply not make sense to take on that debt to get a degree.

Make sure you clearly understand the implications of taking on loan debt. Choose wisely and avoid creating financial issues for others through co-signing.

Most of all, only borrow what you absolutely must to pay for a degree that has sufficient earning potential to repay the loans.

Gambling that putting some of your loan proceeds into cryptocurrencies is something 21.2% of students admit having done to try to pay off student loans. That is high risk and not recommended (or permitted under the terms of college loan lenders).

Some believe the blockchain will be instrumental in changing education:

There is a reason we call things “work”. Work is what you do even when you don’t feel like it. So choose a career you can be passionate about excelling at for decades.

That career may not require a college degree. Technical schools can be less expensive and take less time to learn marketable skills.

Apprentice yourself to the best in a field you’re interested in. Gain valuable experience and get paid to be an assistant instead of paying to go to school.

If you really want to go to college, be serious about it. Research what degrees lead to well-paid careers. Work hard and focus on acquiring skills others will pay you to use — not simply grades.

Once you land your first job out of college, the odds that anyone will ever care what kind of grades you received back in college become slim.

What matters in business is results. Future employers will want to know how you will increase their incomes. Applicants who provide that benefit will be hired. Others are likely to stay unemployed.