Over 700,000 Teens Are Looking for Work This Summer! Could Your Small Business Benefit? 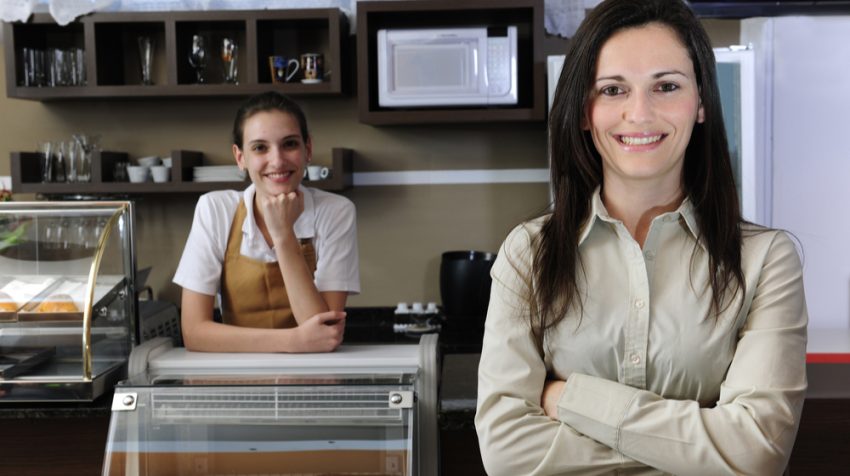 When summer rolls around, America’s teens — those 16 to 19 years old — usually get a job until they go back to school. But according to the latest Pew Research, only 35% percent of teens had a job last summer, which is well below pre-2000 levels.

In trying to figure out the cause of this decline, Pew Research looked at the employment to population ratio for 16 to 19-year-olds in June, July and August. The data for this specific period was compiled from the Bureau of Labor Statistics.

For small businesses relying on teens to enhance their workforce in the summertime, the pool of available workers from this group will get smaller moving forward. According to Pew Research, this trend is being driven by several different factors.

These include fewer low-skill or entry-level jobs, schools ending later in the year, summer enrollment in extracurricular activities to get into better colleges such as volunteering, internships — and finally fewer retail stores due to ecommerce.

According to the report, 29.7% of 16 to 19-year-olds or 4.97 million teens in this age group were employed as of May 2018. This number is before any adjustment due to seasonal variations. 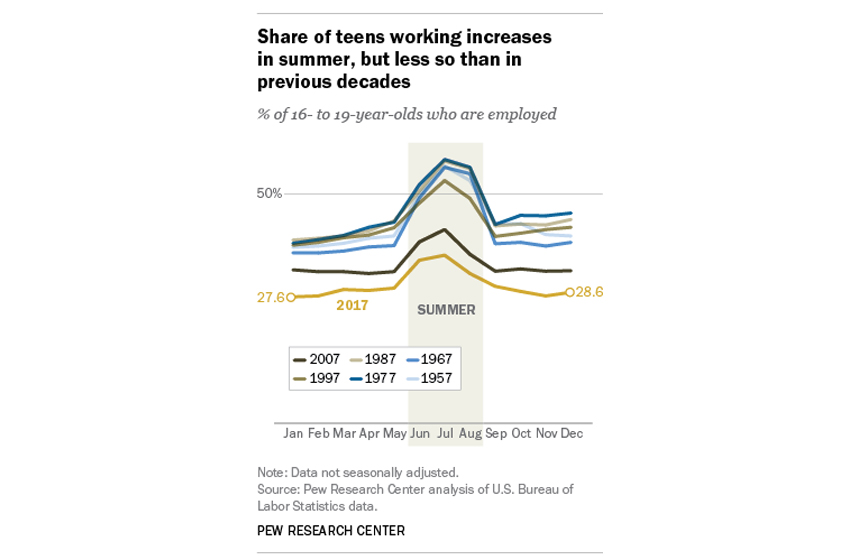 The number of employed teens has been declining even though there are more working-age teens in the country today. Close to 11 million teens or 66% were not in the labor force as of May 2018 compared to 7.8 million or 49.1% for the same period in 2000.

So Where are Teens Working?

Of the teens who are working, an increasing number of them are in the accommodation and food services sector. In July of 2017, 33.8% of the teens who were employed or 2.1 million, were working in this sector. 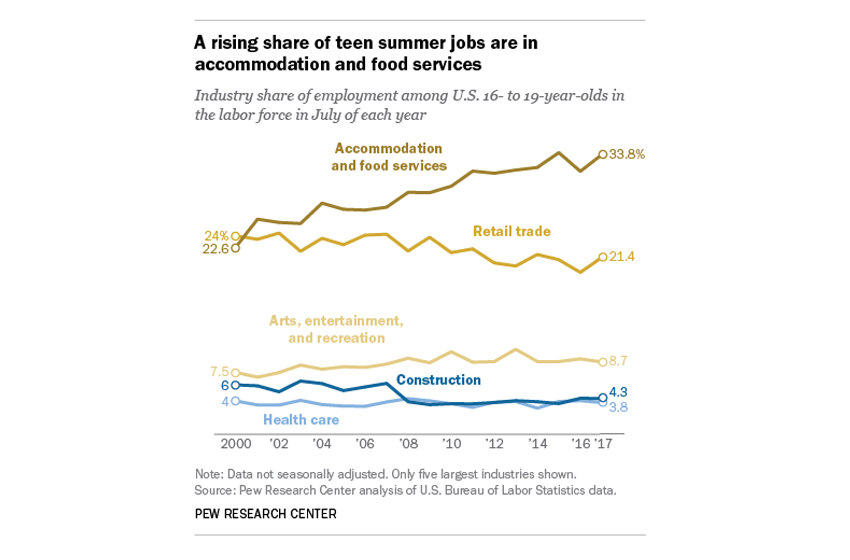 This sector was also the only one to add more teen workers compared to July 2000, with a 19.6% growth rate or 2.3 million workers.

As far as retail, which employed 2 million teens in 2000, there has been a 35.3% decline. Last July, the number of teens employed in retail dropped to 1.3 million.

Other sectors which experienced a decline were construction and manufacturing with a total of 498,000 teens working in both industries — a more than 50% decline from the 1.07 million teens working in these sectors in July 2000.

The arts, entertainment and recreation sector did see an increase in teen employment in terms of percentage. In July 8.7% of employed teens worked in this sector up from 7.5% in 2000. Unfortunately, the total number of teens actually working in the sector fell by 95,000.

The unemployment rate is at record lows and the economy doesn’t seem to be slowing down. This has created a tight labor market which is making it much harder for teens to find seasonal work.

Everyone from older workers prolonging their retirement to immigrants, guest workers and even college graduates waiting for a job in their field are now applying for jobs which were being filled by teens in the past.

But the situation may create an opportunity for small businesses willing to hire teens for summer — or seasonal — work.