Crowdfunding: What is It, When Can Small Businesses Use It – and When Doesn’t it Make Sense 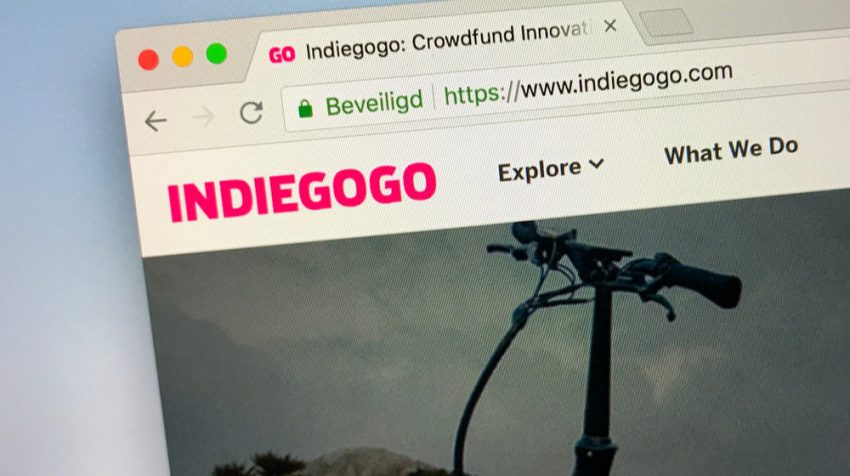 It is important to clarify what kind of crowdfunding is being discussed because the term is being applied to diverse types of fundraising.

While some refer to what Kickstarter does as “donation crowdfunding”, most of the money raised there is actually reward-based.

Backers can make donated pledges without receiving rewards; however, the majority of amounts are pledged to qualify for a specific reward.

Non-profits sometimes apply the word crowdfunding to raising donations. But that is not what Kickstarter enables or what is available for small businesses.

There are also donation sites like GoFundMe which are typically thought of as “personal crowdfunding” for needs such as medical bills or recovery from disasters.

They do not mention raising money for businesses in their FAQs as the answer to “what can I raise money for?” or in the footer of their home page.

But they do have a “see all” section under Fundraise that is dedicated to business fundraisers.

As business is not their primary focus, there would be less competition, but also less visibility. It could be a good option if your business has a public service or charity angle.

Starting gardens for schools, providing free haircuts and covering up racist or gang-related tattoos for free are examples of successful GoFundMe campaigns.

The two types of crowdfunding most useful to small businesses are reward-based crowdfunding enabled by sites like Kickstarter and the newer equity crowdfunding.

What is Reward-based Crowdfunding?

Platforms including Kickstarter and IndieGoGo were originally solely for reward-based crowdfunding.

Campaigns had to be for creative projects, products or services that offer deliverables and appeal to a large enough group of people to elicit strong backing.

Businesses that can use reward-based crowdfunding include:

Money for operating expenses for an existing business cannot be raised using this type of crowdfunding.

What is Equity Crowdfunding?

The JOBS Act passed in 2012 opened up the option for companies to obtain investors through equity crowdfunding platforms.

It broadened the types of crowdfunding available, leading to projections that adding hybrid types could cause crowdfunding investment to hit $8 billion by 2020.

With the relaxing by the SEC of the amendment Regulation A+, investors no longer have to be accredited to participate.

Ryan Caldbeck, Founder and CEO of the private equity firm CircleUp, makes the argument that the term “equity crowdfunding” is inaccurate and confusing.

He suggests that it be called “marketplace investing” for accuracy because crowds are not necessarily involved.

IndieGoGo partnered with MicroVentures to offer their own equity funding. Then in December 2017, they announced they would also enable backers to invest in cryptocurrency tokens for Initial Coin Offerings (ICOs).

Kickstarter has stated they will not be involved in equity crowdfunding.

One of the benefits of crowdfunding is also one of the major challenges. Many hope that the large audiences crowdfunding platforms already have will be all they need to raise funds.

While running a successful crowdfunding campaign can generate publicity for your company or new product, success comes from pre-launch marketing.

Greg Jacobs, who used IndieGoGo to sell $502,000 of his product in about 30 days, says that your pre-launch is critical.

In this video, he advises that for optimal benefit you should be able to sell 100% of your goal yourself before you launch your crowdfunding campaign.

Although a very few get lucky without heavy promotion in advance, the rest fail.

You are responsible for building excitement and sending enough traffic and buyers to meet your goal.

Jacobs also shared that in his experience, his backers are 50% people who know they need what you’re offering and 50% “crowdfunding groupies” who just like to back winners. He advises targeting both groups to maximize success.

What Happens Without Pre-launch Promotion

Think about where your campaign will appear on a crowdfunding platform. Visit the home pages and count the number of campaigns you see.

Let’s take Kickstarter as an example (because they’re the largest). Click the “View All” link. Today, there are 235 projects on that page “recommended for me”.

But that isn’t all of the active campaigns. If I click the x to remove “recommended for me”, now there are 3,406 active projects.

What chance does your project have of being seen without promotion? Read on to find out how projects succeed as a result of pre-launch marketing.

While each platform’s algorithms will be slightly different, they probably all use similar factors with a slightly altered weighting of what is most important.

These algorithms may change over time and only the designers of each platform are likely to know exactly how they work.

But it is possible for someone to theorize how they work. See the data in this Kickstarter algorithm analysis, for example.

In it, the author states that the factors involved are:

By setting your goal amount low to increase percent funded and lining up backers willing to pledge in advance, all three of these factors are within your control.

It is your self-promotion that determines whether your campaign gets featured to a larger percentage of the crowdfunding platform’s audience for an even greater boost.

Did you catch that he sets his goal at the amount he knows he can already sell? On Kickstarter, if you fail to meet your goal all your hard work will be wasted. They are unique in their “all-or-nothing” business model.

IndieGoGo originally offered a choice of paying a higher percentage to keep whatever amount was raised and a lower percentage for all-or-nothing, but now the percentage is the same for both options.

Choose which is best for your project based on whether you need the full amount to fulfill the rewards being offered or you can move forward with a partial amount.

If you need a set amount to order the products your campaign is pre-selling and fail to raise that amount, where will you get the money to fulfill your obligations to those backers?

There is another reason to set a goal lower than your wildest desires. Raising many times more than your goal amount provides a psychological incentive that encourages more backers to jump on board.

Be as accurate as you can with your expense estimates. Even though Double Fine raised eight times their goal amount they ended up underfunded.

How could that happen? Their success internationally greatly increased shipping costs on one of their perks, an expensive-to-produce documentary about their game creation process.

So when you run the numbers, be sure to evaluate as many possible scenarios as you can imagine. And if you still end up with a surprise as they did, come up with an equally creative solution.

Building a community that will back your future campaign will be essential to pre-selling 100% of your goal.

Complete the steps below before you launch your crowdfunding campaign.

The other step is so important, it deserves a separate section.

How well your pre-launch and marketing will draw depends entirely on your ability to convey your story well and get your potential backers as excited about your vision as you are.

When putting together the content, videos and incentives, focus on how backers will benefit from your offers.

Review successful campaigns to get ideas. Make a list of the sections and incentives other campaigns use to include in your own.

For example, take a look at the campaign that enabled Micro to raise $3.4 million for the first consumer 3D printer. Note that they included:

Do this for featured campaigns, success stories, and especially for any that are similar to your own.

Crafting your campaign’s story will take far more time than you expect and is an essential investment.

Do it well, and like Will and Erica Messmer, your business might even be backed by QuickBooks.

Having an existing community built that will back your campaigns is ideal. Because Paul Wheaton created Permies, a permaculture forum, his Permaculture Design Course Kickstarter campaign was fully funded in 22 hours.

Hopefully, you’re already connected with others who share your passion. Failing that, approach the founders of existing groups and see if they might be interested in sharing your campaign with their members.

How to Market Your Crowdfunding Campaign

Market a crowdfunding campaign the same way you market a business. The key many miss is that you must line up backers and media coverage in advance of launching.

The optimum media coverage appears just at the start of your campaign while backers have maximum time to make a decision to support you.

Send out press releases, but do not rely on them alone. Reach out to relevant publications well in advance and ask what options are available.

Use social media to your advantage. Which platforms to focus on most will depend on your target audience.

If marketing really isn’t your strength or you do not have time to do it yourself, you can hire an agency that specializes in crowdfunding marketing.

Do not take anyone’s word for their abilities. Ask about their successful campaigns to ensure they have sufficient experience to warrant being hired.

Request they provide case studies and client references. Then visit the crowdfunding pages of each campaign they provide to see examples of their work.

Read these tips on how to evaluate an agency’s claims using the KPIs and results their clients requested rather than vanity metrics.

Kickstarter offers a list of services based on merit here, but it does not include any marketers.  They do offer guidelines on evaluating marketing agencies.

Plan Ahead for Tax Payments

When you set your goals for your crowdfunding campaigns, be sure to time the income to fall in the same year as the expenses related to that income.

When Jenny Wicker raised $42,000 in December of one year, but could not place the production order until January, she could not offset the taxes owed against the accompanying expenses in the following year.

Consider taxes when setting your goals and also to decide on the timing of your launch.

Beyond the publicity your campaign can generate, there are additional benefits to using crowdfunding.

Because your campaign is backed by buyers, even larger companies like Sony are using crowdfunding to test the market.

These supporters are not just saying they will buy – they are committing money in advance.

You can measure the demand for what you’re offering. And these early supporters are more likely to become evangelists who will spread the word about your company.

Your Chances of Success

As of August 2018, 63.71% of Kickstarter projects failed. If you don’t want to be part of this statistic, apply the tips in this post and in the book Crowd Start.

Also, use the resources provided by each platform. Visit the education center on IndieGoGo and the Creator Handbook available on Kickstarter.

If you choose another platform, seek out the resources and guidance they provide.

Invest all the time it takes to get your creative ready, build a community, reach out to the media and set up your pre-launch.

Plan to be available to stay on top of the campaign when it goes live. Backers will expect to see regular updates and have their questions and comments answered promptly.

Crowdfunding isn’t quick or easy, but it can be a useful way to fund your startup, project launch or small business.