Finding the Silver Lining in Those Poor Sales Numbers 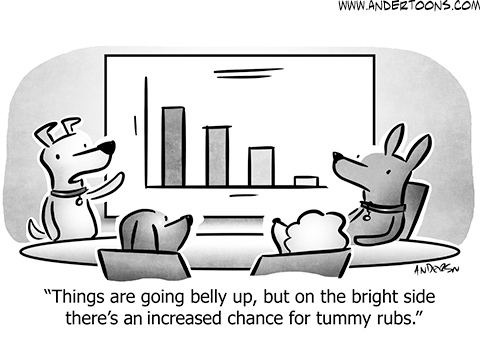 As a cartoonist you often have to draw different types of dogs.

For example, in this cartoon I think that’s a lab in the front left, a poodle front right, and a German shepherd rear right. But what kind of dog is rear left? What breed is leading this meeting? Why it’s an Anderdog, of course.

The Anderdog first appeared almost 20 years ago when I started cartooning. He’s sort of just a generic dog. Long nose, a little chubby, shortish tail… But what really makes the Anderdog an Anderdog are those pointy/floppy ears.

Seriously, if you look back at almost two decades of my cartoons you see this mutt appear over and over. It used to bother me that I couldn’t figure out the breed, but once I discovered it was an Anderdog, I felt so much better.

Now if I can just get Westminster to recognize it.