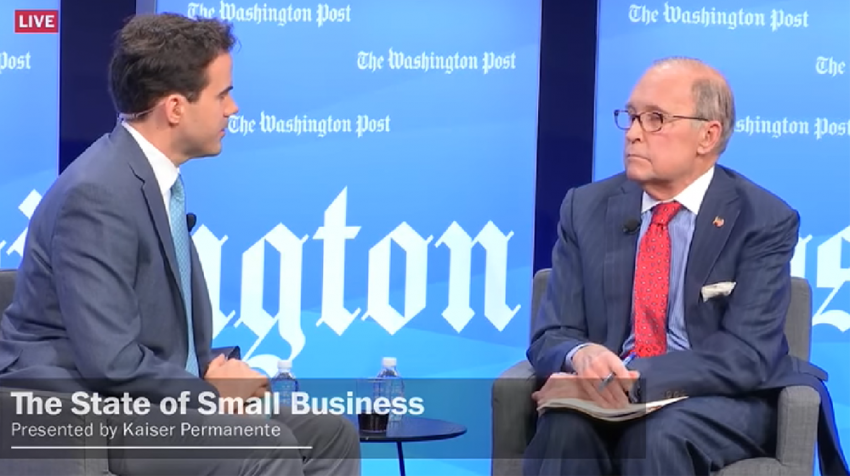 In a recent discussion on the state of small business, White House National Economic Council Director Larry Kudlow insisted the impact of the current trade war between the U.S. and China on small businesses would be minor. Kudlow went as far as to say the economic growth would remain strong.

Kudlow and Bluemercury Co-founder and CEO Marla Beck discussed the factors that matter most to small businesses at The Washington Post’s The State of Small Business recently. Small Business Trends attended the event to find out more about the current state of the big things on the radar for small businesses like wages, taxes and hiring.

Kudlow is the Assistant to the President for Economic Policy and Director of the National Economic Council. He began by making it clear he didn’t see the current tariff battles between China and the United States as particularly worrisome for small businesses calling any possible effect on the economy “very modest.”

In fact, he even went on record forecasting the current rate of economic growth at 3% was something they could expect into 2019.

“We will put out our budget and while I don’t want to give away the family jewels, three percent is a good number to think about,” he said at the discussion held at the newspaper’s offices on Nov 1.

Despite these reassurances, the current trade war between the two countries has been a concern for a number of American small businesses like farmers and those in other industries like manufacturing. In response to the tariffs they see as a drag on their operations, groups like Tariffs Hurt the Heartland, Farmers for Free Trade and American For Free Trade have sprung up.

However, Kudlow cited a Washington Post article on the current job surge for blue collar workers and the fact the wages for the group were growing faster than their white-collar counterparts.

“That suggests to us that the business tax reforms and tax cuts are working,” he said. The Tax Cuts and Jobs Act came into effect this year.

Kudlow also took sides when it came to the idea of implementing a federal minimum wage, calling it a terrible idea and saying it would damage small businesses particularly.

On the healthcare front, another area where there’s been some uncertainty for small businesses, while the administration has taken steps toward replacing Obamacare, Kudlow said there were no plans to touch the larger entitlements, namely Social Security and Medicare.

Co-founder and CEO of Bluemercury Marla Beck was another panelist. She stressed, among other things, the importance of technology to small business success generally and how critical social media had been to her niche specifically.

“For beauty, Instagram provides a marketing opportunity that didn’t exist before,” she said. “It’s very democratic and you have a lot more diversity in terms of what’s available. It’s fundamentally affecting the categories of business.”

She also pointed to facial masks and lipstick as two of the categories that have been fundamentally changed by this social media tool. Beck also said Instagram has created whole new business models for entrepreneurs to take advantage of.

“There’s even a brand called Winky Lux that built their whole business via Instagram and now they’re turning the retail model on it’s head. They have a store in New York City where they charge you $10 to get in but every room is Instagramable,” she said.

She says that because Instagram gives access to customer feedback right away, it’s even sped up the pace for changing her merchandising.

“It used to be we’d go into the stores and talk to our customers, interview them and even email them and now you can look everyday to see what’s trending,” she told one of the moderators.