The Punk Rock of Business is the Ultimate Way to Differentiate

The Punk Rock of Business keeps the reader as tuned in as a new wave teenager listening to the car radio. 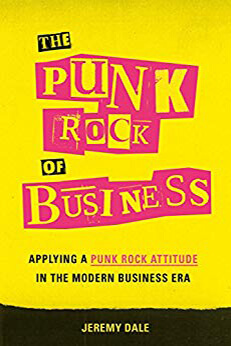 —God Save The Queen, The Sex Pistols

The Sex Pistols received a host of criticism regarding the opening lines of their famous song titled the same as the British anthem. The BBC banned its airplay while stores refused to sell the singles.  But the punk band established a legacy of anti-establishment ideology, a rebellious ethic and DIY musicianship that influenced pop music long after its demise.

This anti-establishment attitude is also the focus of the appropriately titled The Punk Rock of Business: Applying a Punk Rock Attitude in the Modern Business Era by Jeremy Dale.  Dale has over 20 years experience in the consumer electronics industry, including a stint as CMO at Motorola during the RAZR mobile phone days.   He is currently applying his punk rock approach to a start up in the UK.

The book’s advocacy of avoiding the status quo makes  the right motivator to tune up a business for success.

What Is The Punk Rock of Business About?

Dale believes that too many businesses create an environment for mediocre critique, delivering lukewarm results consistently. Dale offers a road map for how to move away from average results. He does this with eight punk rock elements – principles that Dale believes matches valued principles in the business world.

Dale selected punk rockers as a business muse because of their sensibility to be outspoken and authentic.  Punk rockers are also dedicated to their music.  Dale believes punk bands are mission driven because of their ignoring social convention, yet they also inspire meaningful societal paradigm shifts in the fans who notice them.   In each element, Dale shows how business models can emulate those qualities with similar dedication real success.

Here’s an example of how Dale believes a punk band passion can be adopted in business.

“Punk has always been anarchic and has always had an anger associated with it, but at its soul, punk is optimistic. It is about seeing what’s wrong, having a passion to change it, and then having the guts to stand up and do something to make a difference…. Punk attitude in business is exactly the same, and the starting point has always been the same. Have a cause it you care passionately about.”

What I liked about The Punk Rock of Business?

The eight elements have interesting names. They are:

Each element contains mini sections with a key summary paragraph and a section asking, “So what are you going to do about it?”   That question allows the reader to write his or her own thoughts down, creating a proactive journal within a hard cover book. I liked how it gives a helpful methodology for a small business owner to capture fleeting thoughts and come back to them later.

The element Say It As It Is holds much promise as an enticing section. Dale wisely suggests how to speak up without being a rebel without a cause or worst, an entrepreneurial loudmouth.  Take this suggestion for example, the idea of calling yourself out as a sign that your “Say It As It Is” message is for you as much as it is for other people:

“There are times when our work is substandard; be the first to identify it. Calling yourself out shows class and shows the high performance bar that you set for yourself.”

True to the theme of fighting mediocrity, Dale also advise true praise for something meaningful:

“Only give deserved praise. It says a lot about your performance bar, and when you do give out praise, it is so much appreciated.”

Another gold nugget is in the element, Reject Conformity. Here Dale gives advise on wooing a client or being wooed, that sometimes VIP treatment is not necessary to win the day.

“A steak and a bottle of 1994 Chateau Mouton-Rothschild don’t always beat a pie and a pint. Good people like to work with people who are down to earth, people of action, and people they connect with far more than the people with fancy trappings.”

What Interesting Points Did the Book Raise?

One interesting point the book raises seems somewhat counterintuitive in a data driven business culture. Dale argues against trusting too much in analytics when examining the effectiveness of your efforts. Take this quote about understanding your movement.

Dale writes, “Suppose data gives something — preciseness and validity — that many find attractive. When people ask a question how will we measure it, I think they are really asking, how will we know when we have a cheap date?… Measuring things of the heart and soul are vastly overrated. Can you imagine creating a scorecard every time you had a girlfriend to try to measure how in love you are? Of course not, so why are we so fixated with measuring everything that moves (or doesn’t) at work?…. So don’t you dare try to measure your movement. Trust your intuition, go for it, and feel the progress. That is far more punk.”

Though its interesting how Dale frames the “measure everything” question, the “trust your gut” idea is hotly debated in leadership books, and with more data-driven initiatives demonstrating value, intuition-only decisions can be hard to sell as the right advice for the data driven present — much less  the future.  The concept of technical debt — a metaphor for the cost from lack of specific knowledge — haunts tech-knowledgeable leaders looking to continue a competitive advantage through data, software and machine learning, among other technologies these days. So “trust your gut” advice can seem very out of touch.

Yet where that trust resonates best in the book is within the idea of speaking to your audience. That process which is at the heart of band-fan relationships is very similar to data science and analytic techniques, where analysts are often using data to “speak” to clusters or segments — and the audience that makes them up.  In the end, Dale is really advocating for business leaders to avoid apathy. And this and other arguments that might at first seem counterintuitive can be a plus to a good operational strategy.

Why Read The Punk Rock of Business?

Dale’s approach to the reader is similar to Gbenga Ogunjimi’s in the book, Borderless Voice.  Both authors strive to inspire the reader with a framework analogous to their environment.  What makes The Punk Rock of Business a must read is that it draws ideas from music history and applies them to business, keeping the reader as tuned in as a teenager listening to the car radio.

Pierre Debois is Associate Book Editor for Small Business Trends. He is the Founder of Zimana, a consultancy providing strategic analysis to small and medium sized businesses that rely on web analytics data. A Gary, Indiana native, Pierre is currently based in Brooklyn. He blogs about marketing, finance, social media, and analytics at Zimana blog.
2 Reactions
Subscribe
Follow @smallbiztrends
RSS LinkedIn Pinterest iTunes