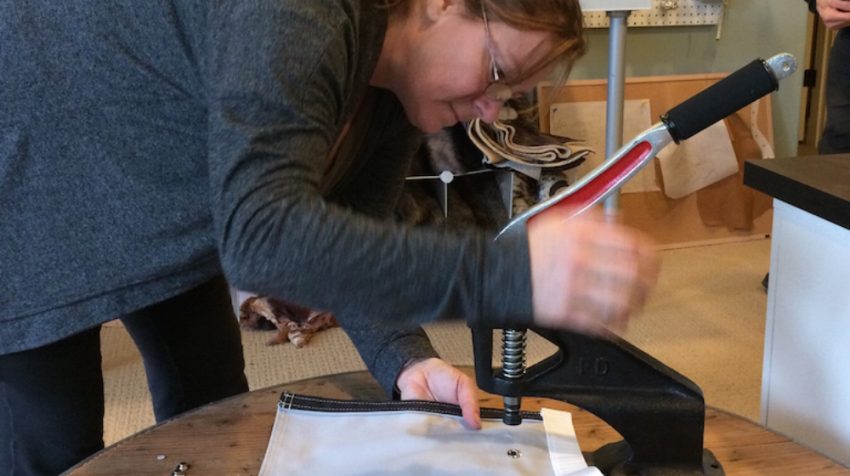 Medical boots aren’t exactly known for being fashionable. But if you’ve had a medical issue that requires you to wear one, Flaunt Boots & Accessories offers a huge variety of fashionable covers and accessories to help you change up your look. What started as a project to help a friend has since turned into a business that has gotten the attention of some pretty high profile celebrities. Read more about the company’s journey in this week’s Small Business Spotlight.

Owner Dana Hennelly told Small Business Trends, “Our concept is to have our covers look like another shoe/boot you would already have in your closet.”

Hennelly explains, “Our competitors have one design in 66 different colors. We have several different designs in seasonal colors.”

As a way to help a friend.

Hennelly says, “A good friend of mine showed up at my Superbowl party wearing a gray AirCast medical walking boot after tearing her ligaments in your ankle. The next day she sent an SOS text to me asking for my help in covering her boot because she was leaving that week to LA to attend The Oscars. She bought a ridiculously expensive dress with a slit up the side which exposed the ugly boot. She begged her doctor to give her a black medical boot instead. Had he, I wouldn’t have started my company. Why did she call me? She and I had spent years volunteering at our kids elementary school and she knew I am pretty creative. As a kid, my step-mother opened a fabric store and all us kids had to work there and help out. I learned to sew. I’m still using that same machine! Back to the story, Angela and I met at a fabric store to find a solution for her. After a sleepless night of creating her vision, I sent her on her way two days later with two different boot covers and several accessories to change the look over the next 10 weeks she was in it. And for those next 10 weeks she continually text me daily saying someone would stop her asking where she got it. I decided to do some research and found out there are a very high number sold every year! I came up with the name, because I never saw Angela without that boot cover on and it almost seemed that she was flaunting the fact she was injured but recovering in style.”

Hennelly explains, “A friend called me and told me Chef Carla Hall on The Chew, was in a medical boot and I should send her a cover. I did and she went on the air and did a fashion show! Then I sent a Pajama boot cover to Mario Lopez on Extra Extra TV show. He went on my website and ordered a boot cover. He put on the boot cover and did a video on Instagram that got 126K views. He then asked me to make him a black one since he was a guest host for the Ellen Show. Sadly the producers didn’t want him to wear it. That would have been cool. Sad thing is, I made a boot for Ellen to give to him cause she likes giving gifts to her guests. Maybe Ellen will give it to the next celebrity in a medical walking boot! Lastly, I just made a leopard boot cover and sent it to Rod Stewart’s management company. Hopefully he will like it enough to wear it in Vegas during his concert series coming up!” 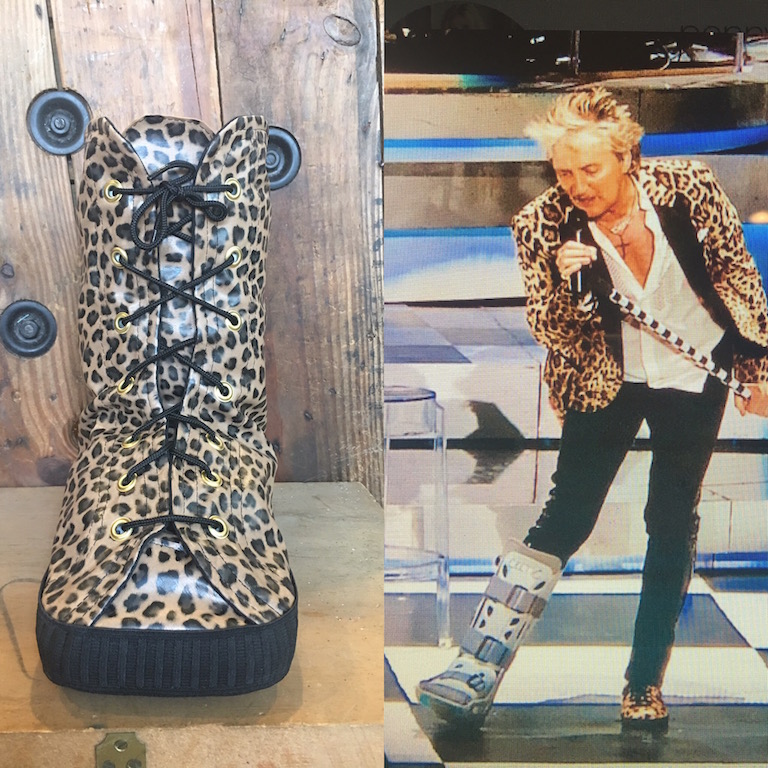 Hennelly adds, “We placed a purchase order for a local manufacturer to make 4 of our designs and pre-cut more for assembly later. It was a huge amount of money for us at the time. If the end product wouldn’t have been the way we imagined, it would have been a waste. Some of the product we have to go back and alter ourselves, which is a reminder of the risk.”

Hennelly says, “I would hire a pattern maker and buy the computer for it. Market directly to Dr’s offices. Put money into inventory.”

Hennelly explains, “My sister and I have a great time working together once a week. She lives about an hour away from me. We put on great music and we work in my design studio located in the basement of my home. My cat insists on being at the center of everything we are doing! When we were recently taking pictures of our product on a giant wooden spool I found – my cat, Moose, was sticking his paw through a hole and wound up in a few of our product shots! A-dorable.” 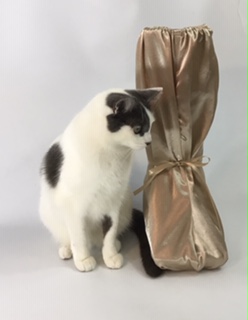 “Smile and the world smiles with you”. Stanley Gordon West.

Hennelly adds, “Our Dad used to say this quote a lot.”