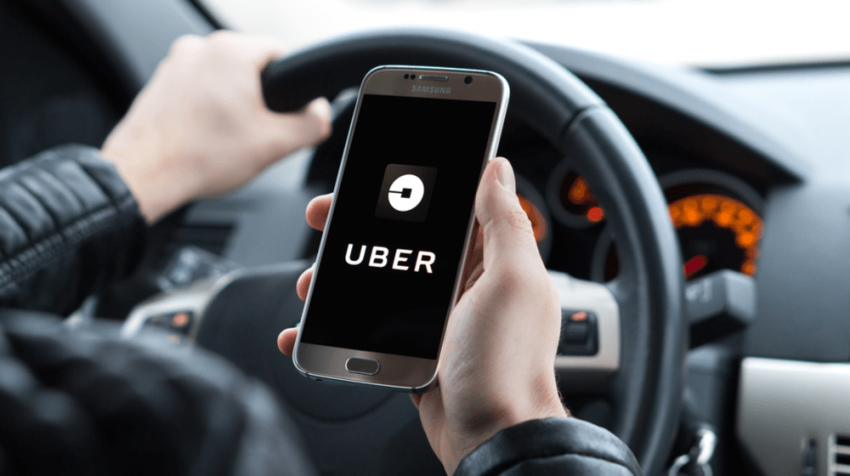 How much do Uber drivers make? The answer to that question has become a mystery even the brains at MIT weren’t able to quite figure out.  But there seems to be a clear consensus it is less than what Uber claims its drivers make.

The 2018 Ridester Independent Driver-Earnings Survey (RIDES) has, according to the company, carried out “One of the largest and most comprehensive independent driver earnings studies undertaken to date.”

What makes this survey stand out is it asked drivers to provide actual evidence of their income by sending screenshots of their earnings page from the driver app. Past surveys relied on self-reporting, which for a myriad of reasons resulted in the drivers over or under reporting their income.

The conflicting information is largely Uber’s own doing. Why? Because with the available technology Uber should be able to report what each driver in every city around the world is making down to the penny, shilling or any of the currencies used in the 65 countries the service is available in.

However, in 2014, Uber claimed the median annual income of a  Uber driver in New York City was a whopping $90K+. Since then the Federal Trade Commission has alleged (PDF) less than 10% of the company’s drivers are able to earn this amount.

While initially, Uber’s claims may have been true with all the gamification incentives the company offers, this seems no longer the case. And it has landed Uber in a position no company wants to be in: not being trusted.

Once the public loses trust in you as a company, getting this trust back is almost impossible. When you add a settlement of $19,798,233 to the FTC for allegations of exaggerating yearly and hourly income drivers could make in certain cities, any number Uber comes up with moving forward is going to be taken with a hefty grain of salt.

In the release announcing the settlement, Jessica Rich, Director of the FTC’s Bureau of Consumer Protection, said, “Many consumers sign up to drive for Uber, but they shouldn’t be taken for a ride about their earnings potential or the cost of financing a car through Uber.”

With that out of the way, what has the Ridester survey found out?

The Pool of Respondents

The 2018 Ridester Independent Driver-Earnings Survey (RIDES) had 2,625 driver respondents. This included 719 drivers who provided screenshots of their earnings.

The survey was carried out over a two-and-a-half-month period between May and July 2018 and the drivers were not offered financial incentives to participate.

In the report, Ridester says the goal of the survey was to, “Minimize the uncertainty over self-reported income claims by drivers.”

The earning Ridester has come up with in its report closely matches what the Economic Policy Institute (EPI) revealed in May of 2018.

Just as in the Ridester report, the EPI was looking to offer more clarity with, “A framework for understanding various pay and size concepts and a common terminology.”

One of the questions it wanted to answer was: “What is the hourly pay earned by Uber drivers comparable to hourly wages or compensation of payroll employees (i.e., driver net income after accounting for Uber commissions and fees, vehicle expenses, payroll employees’ benefits, and the interaction of expenses and benefits with the tax code)?”

In that report, the EPI said the hourly pay of Uber drivers, when taking into account company fees and vehicle expenses, is on par with the 10th percentile of private-sector wages.

This means Uber drivers make less than what 90 percent of Americans earn per hour in their jobs. To be exact, the EPI report said it was $9.21 in hourly wages, which is lower than the minimum wage in 13 of the 20 major urban markets where Uber operates.

Ridester revealed the 2018 median earning for Uber-X drivers is $13.70 before tips and $14.73 after tips. This is before insurance, gas and car depreciation, which brings the number down to less than $10 an hour.

The reason Ridester used median income instead of average income is that the median income puts you closer to what most people in a group earn.

See Also: The A-Z of Keeping Your Customer Surveys Fresh

When you use averages, an outlier can dramatically increase the overall number even though there is a very small percentage or even one person earning the high wage.

Uber also has different types of drivers, which is taken into consideration in the Ridester report. The company looked at uberSELECT, uberBLACK, uberSUV, uberLUX, and Uber Eats along with UberX, which has the largest percentage of drivers.

By looking at each segment separately, you can see what they are making. This removes the chances higher tier drivers will influence the vast majority of drivers, who are UberX drivers at 74.7% of the overall respondents.

Even in this survey, drivers who were self-reporting provided income which is 37.40% higher than they were able to show with their screenshots.

While 928 drivers submitted screenshots of their earning, only 719 were usable for the purposes of this survey. The strict adherence to this methodology was to get a true picture of hourly driver earnings.

When it comes to the actual job, 50.3% said driving for Uber was their only job, with the remaining 49.7% stating they drive in addition other work they do.

So how satisfied are the drivers when it comes to the money they make? Seventy percent of drivers gave Uber 3-stars or less on earnings satisfaction. Another 9.3% gave it 5-stars and 20% gave it 4-stars.

Almost the same number of drivers (66.5%) also rated Uber with 3-stars or less for its corporate leadership. The five- and four-star rating was given by 10.7% and 22.8% of the drivers respectively.

The responses for UberBLACK and UberSUV were according to Ridester based on a very limited number of responses. As you can see, they only make up 2.1% of the drivers overall.

Again, it is important to point out this is before the aforementioned expenses.

The Ridester infographic below shows the best and worst earning states and cities for Uber drivers in 2018. 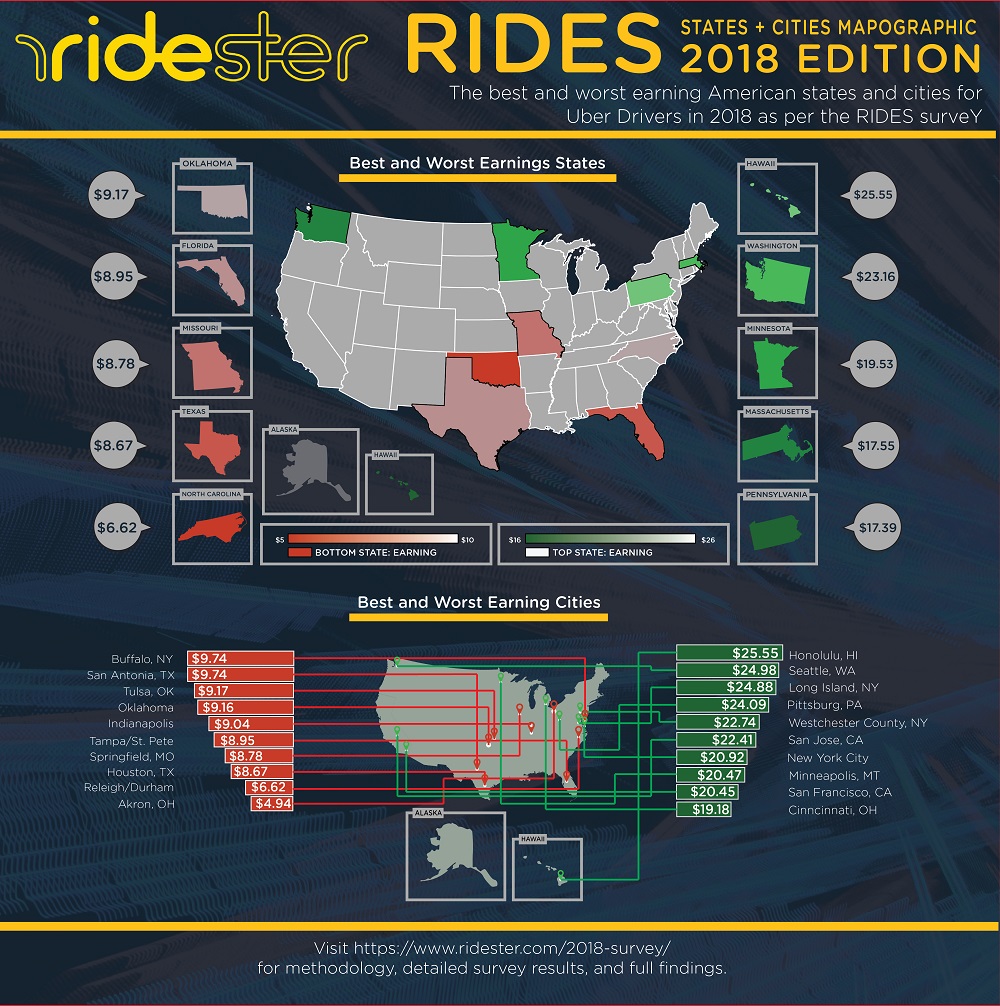 The Issue of Expenses

Driving a vehicle for a living incurs a lot of expenses. The IRS puts the total cost at 54.5 cents per mile and Triple-A has it at 49.44 cents per mile.

In the past one of the biggest points of contention of Uber driver earning was just how much expenses they incurred.

The standard set by the IRS, Triple-A and other organizations have been used to calculate the overall expense of running a vehicle long before Uber came around. And it is no different for Uber drivers.

At the end of the day when everything is calculated, Uber drivers don’t make as much as previously advertised by the company. And as minimum wages continue to increase across the country, such as $15 for Amazon warehouse workers, Uber drivers will have more opportunities to earn more if they choose to do so.

This brings another point. Uber drivers know full well just how much they make. Whether it is their only source of income or it supplements other jobs, the freedom and flexibility Uber offers is a big selling point.

Granted the drivers would love to make more money, but the working structure offers options for pursuing what they love doing until they get more experience and established in their chosen field.