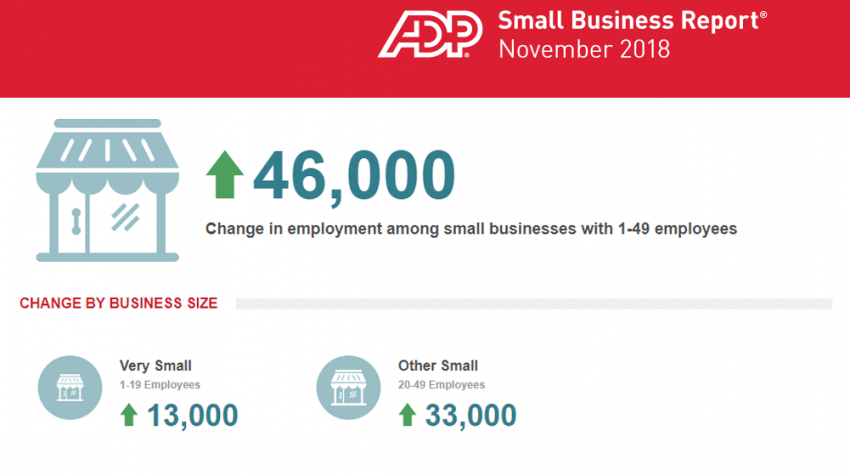 The November ADP Small Business Report shows an increase of 46,000 jobs for the month in private-sector small business employment.

The ADP data for small business specifically looks at companies with 49 or fewer employees. Small businesses account for 58.9 million employees in the United States, or 47.5% of the country’s workforce. Therefore, the ADP data plays an important role as an economic indicator.

The 46,000 jobs added in November by the small business sector is a much higher number than the 29,000 reported in October.

A closer look at the numbers reveals businesses with one to 19 employees generated 13,000 jobs. But the lion’s share of the new jobs, or 33,000, came from the larger end of small business, i.e., those with 20 to 49 employees.

Overall the national employment number of all jobs was down from October’s impressive 227,000 total to 179,000. For November, midsized companies delivered the highest number of employment with 119,000 jobs. Large companies were only able to manage adding 13,000 jobs.

Ahu Yildirmaz, vice president and co-head of the ADP Research Institute, addressed the job growth by midsize businesses in a prepared statement. He suggested the reason might be because these companies are insulated from global changes.

Large enterprises with a global presence are currently dealing with a volatile environment.  Midsize businesses operating in country don’t have to face the same challenges as these large corporations, at least not yet.

But according to Mark Zandi, chief economist of Moody’s Analytics, even though job growth is strong it has likely peaked. Zandi goes on to say, “This month’s report is free of significant weather effects and suggests slowing underlying job creation.  With very tight labor markets and record unfilled positions, businesses will have an increasingly tough time adding to payrolls.”

The service sector is again the leading producer of jobs. Service section jobs accounted for 163,000 of the 179,000 total. Professional / business were responsible for 59,000 jobs. Education / health services brought in 49,000 jobs.

According to ADP, in 2018 small businesses averaged 43,000 new jobs per month to date through November.  This is considerably lower than the 61,000 per month average of 2017.

One of the biggest challenges small businesses faced in 2018 was their inability to find qualified candidates to fill open positions. This could be one of the reasons fewer jobs were being filled by small firms.

Competition increased for qualified talent. The most qualified candidates asked for higher wages. Small businesses competing with larger organizations did not have the budget to make the hires.

The ADP National Employment Report is aggregated from the ADP payroll data of 411,000 U.S. clients that employ around 24 million workers in the U.S. 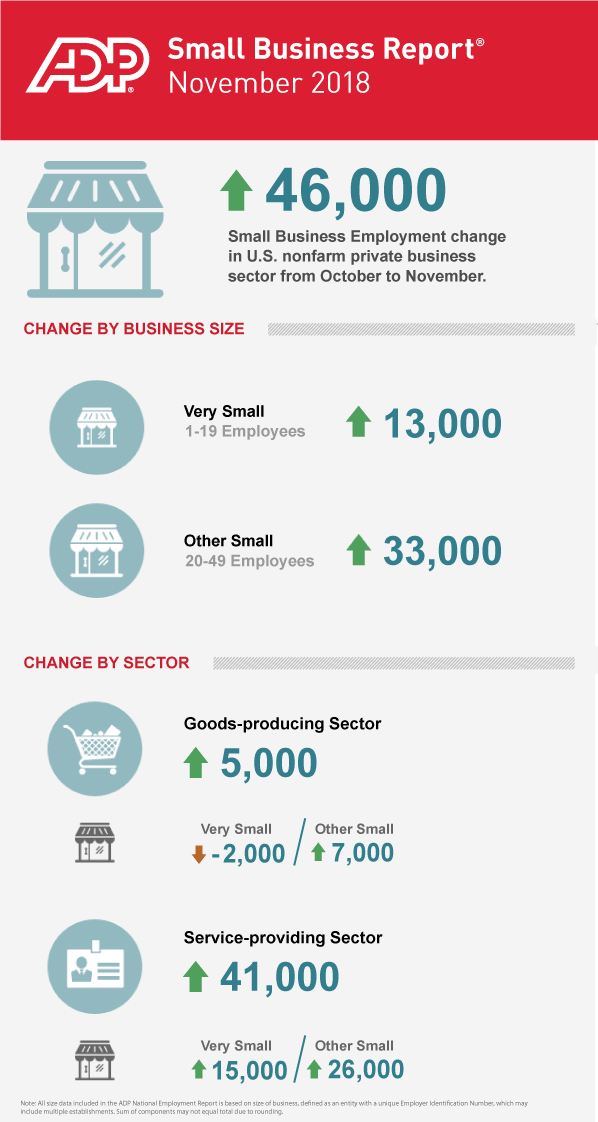