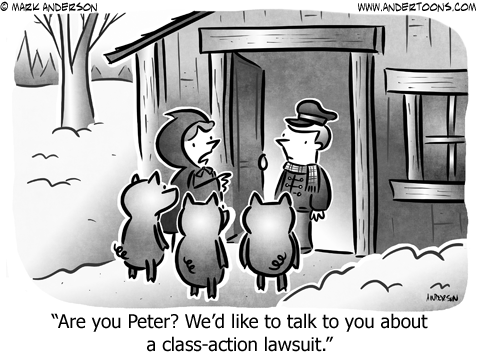 Class action lawsuits aren’t uncommon in business. And the idea of characters who’ve been harmed by wolves is a fairly straightforward gag. Now, what I want to point out in this cartoon is something really simple — the shingles on the roof.

I’ve been a cartoonist for more than 20 years, and goodness knows I’ve drawn my share of homes and buildings, but every so often you find some new little detail that you hadn’t before.

Normally I’d just draw the roof with a few lines and leave it at that. If it were another angle I might imply shingles with a few lines, but from this view you don’t really see them.

But on this cartoon, for reasons I can’t totally explain, it occurred to me to add three little curved lines on top. It’s simple, it’s almost not noticeable, but I think it adds a lot to the cartoon in a subtle way.

Anyway, I think it illustrates that even when you’ve been doing something for a very long time and you feel like you know what you’re doing, there’s still room for little discoveries if you allow for them.