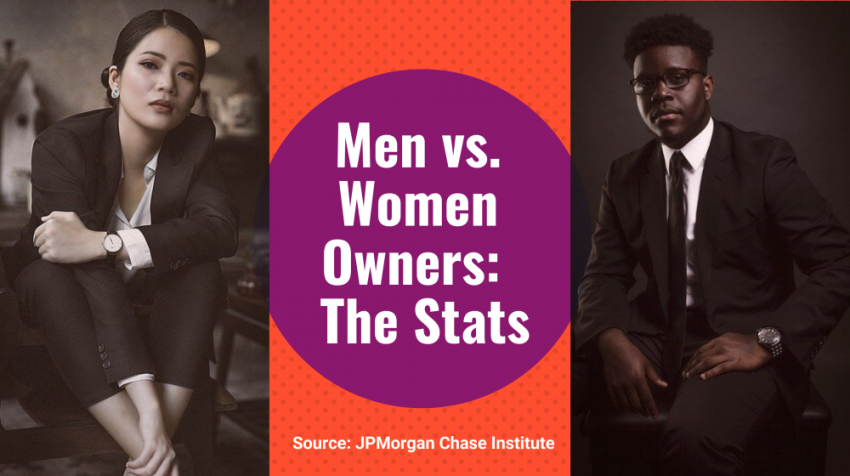 The gender pay gap has long been a problem in the workplace, and it continues to this day in 2019. Women entrepreneurs have overcome this disparity by opening their own business to control their destiny. But a report released by the JPMorgan Chase Institute has revealed there are also noticeable gaps when it comes to the revenue between men and women-owned small businesses.

According to the “Gender, Age, and Small Business Financial Outcomes” report, the revenue of women-owned businesses was 34% lower in the first year. Beyond the first year, revenue growth is also noticeably slower compared to men.

This is not to say women entrepreneurs don’t do well, but there are factors which are responsible for the lower revenue. In the report, JPMorgan Chase Institute said, “Our counterfactual analysis suggests that women may face different challenges starting and growing a business compared to men in the same industries.”

The report goes on to say different owner characteristics such as race, education, and prior work experience could play a role in business outcomes. Unobservable or unavailable characteristics in the data may also be a factor in explaining the revenue and revenue growth differential.

The data for the report comes from a large pool of research including a follow up of the JPMorgan Chase Institute July 2018 report, “Growth, Vitality, and Cash Flows: High-Frequency Evidence from 1 Million Small Businesses.” This was a first of its kind research which showed the factors responsible for the growth and failure among different kinds of small businesses.

Researchers specifically focused on gender and age as they relate to prevalence, firm size, cash flow, growth, longevity, and other factors.

New firms are overwhelmingly started by men. While women start 30% of businesses, men account for the remaining 70%. This is more than a 2 to 1 ratio.

When women do start a business, they are typically smaller than the ones founded by men, with the report stating the difference persists over time.

The median revenue in the first year for women-owned small businesses was $50,000 compared to more than $75,000 for their male counterpart. In the second year, the growth in revenue goes up to $59K for women and $91K for men.

Year three and four also favor men owned-businesses as they generated $100K and $105K respectively compared to $65K and $68K for women during the same period.

Disparity also extends to the lack of financing women entrepreneurs receive. The report says women are less likely to receive external financing. It goes without saying, without the proper initial or continual funding it becomes that much harder for women to grow their business at the same pace as men.

However, the few women who start a business in the male-dominated construction (90% men to 10% women), high-tech manufacturing (87% to 13%), and metal and machinery (87% to 13%) did manage to beat the men with larger first-year revenue.

In the report, JPMorgan Chase Institute concludes by saying leaders and decision makers should implement policies which help women start larger businesses and grow them so it can have material impact on the US economy.

It adds female-owned businesses should start with the same revenue levels as their male-owned counterparts. This would allow them to experience the same level of revenue growth as male-owned businesses which in the long term will substantially increase the overall economic contributions of the small business sector to the US economy.