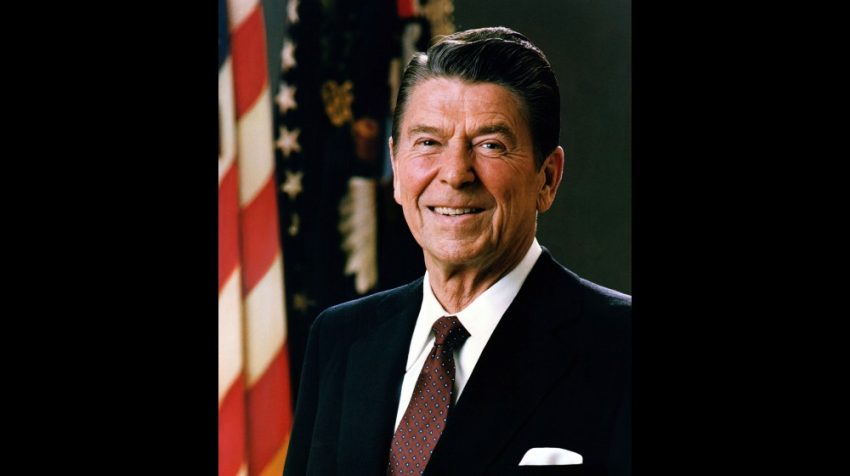 Former U.S. President Ronald Reagan had a great grasp on what it means to be an entrepreneur and small business owner.  He understood the challenges faced by small businesses and entrepreneurs, and the magic they create.

President Reagan (pictured above) not only understood this, but he lived up to his nickname as the Great Communicator. He was able to articulate and describe the contributions of small business owners and entrepreneurs, in a few sentences. Here are some Ronald Reagan quotes that will inspire your journey.

His remarks in a June 1983 speech before the National Federation of Independent Business are a perfect example. He gives a realistic and accurate description of starting and owning a business.  He acknowledges the challenges, yet captures the rewards both economic and spiritual of being a small business owner:

“We hear so much about the greed of business. Well, frankly, I’d like to hear a little more about the courage, generosity, and creativity of business. I’d like to hear it pointed out that entrepreneurs don’t have guaranteed annual incomes. Before they can turn a profit, they must anticipate and deliver what consumers want. They must risk their money with investments.

The truth is, before entrepreneurs can take, they must give. And business begins with giving. And I believe business works best, creates the greatest wealth, and produces the most progress for all when we’re free to follow the teachings of Scripture: Give and you will be given unto . . . search and you will find . . . cast your bread upon the waters and it will return to you manyfold.  ***

I believe we’re meant to use wisely what is ours, make it grow, then help others to share and benefit from our success. And the secret of success is understanding that true wealth is not measured in material things, but in the treasures of the mind and spirit.

Oil was worthless until entrepreneurs with ideas and the freedom and faith to take risks managed to locate it, extract it, and put it to work for humanity. Someday, oil itself will be replaced if those driven by great dreams are still free to discover and develop new forms of energy. ***

The principles of wealth creation transcend time, people, and place. Governments which deliberately subvert them by denouncing God, smothering faith, destroying freedom, and confiscating wealth have impoverished their people. Communism works only in heaven, where they don’t need it, and in hell, where they’ve already got it.”

As the last line above shows, Reagan also was famous for using humor to make his points. With an engaging half grin and a few softly-spoken words, he’d win people to his side.

In an April 1982 speech before the U.S. Chamber of Commerce, he observed (video below):

“The American dream of human progress through freedom and equality of opportunity in competitive enterprise is still the most revolutionary idea in the world today. It’s also the most successful.

Entrepreneurs are heroes of modern times. They rarely receive the credit they deserve. Treasury Secretary Don Regan recently reminded the student body of Bucknell University that it was under capitalism that mankind brought “light where before there was darkness, heat where once there was only cold, medicines where there was sickness and disease, food where there was scarcity, and wealth where humanity was living in squalor.” And much of what he was talking about came into being in the lifetime of many of us here in this room. Now, I’ve already lived about 20 years longer than my life expectancy at the time I was born. That’s a source of annoyance to a great many people.

But the societies which achieve the most spectacular progress in the shortest period of time are not the most tightly controlled, the biggest in size, or the wealthiest in material resources. They are societies that reward initiative and believe in the magic of the marketplace.

Trust the people — that’s the secret weapon. Only when people are free to worship, create, and build, only when they can decide their destiny and benefit from their own risks — only then do societies become dynamic, prosperous, progressive, and free.”

Later in that same speech before the Chamber of Commerce, he quipped:

“Winston Churchill said that some see private enterprise as a predatory target to be shot, others as a cow to be milked, but few see it as the sturdy horse pulling the wagon. Well, this administration believes the workers, savers, investors, and the entrepreneurs of America have been milked and shot at long enough.”

President Reagan could make you proud to own a business in a mere sentence.  Look at his opening words at a rally in Wyoming in October of 1982:

“It’s great to be back here in Wyoming, back where your farmers and ranchers and workers and small business people dream big and toil hard to make dreams come true.”

If you happened to be going through tough times, a sentence like that reminds you what it’s all about.

(2) Have no guaranteed income — unless they create that income.

(3) Must anticipate their customers’ needs.  In other words, business owners have to be creative enough to think of the needs and desires of the marketplace and how to meet them.

(4) Must deliver before they reap any rewards.  There’s risk taking involved in starting and operating a business.  Business owners often must spend before they get anything in return.  Those with a steady paycheck do not always grasp that.

(5) Drive the economy and add to society. Small business owners create jobs and drive innovation, leading to a dynamic, prosperous and progressive society.

Every politician talks about small businesses as the “lifeblood of the economy.”  With Ronald Reagan, it felt like he actually believed it.