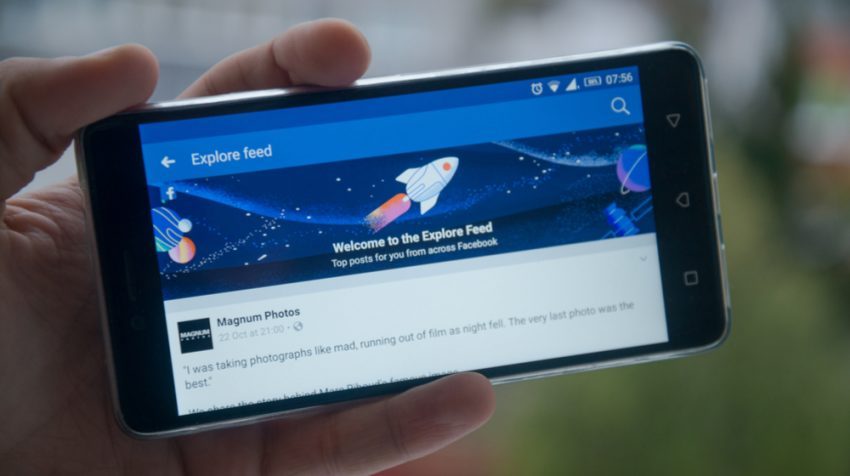 In this article, I’ll tell you why I’m making this assertion, the conspiratorial events leading up to the death of the News Feed, what it all means for the future of Facebook marketing, and four solid takeaways that will superpower your marketing in a post-News Feed era.

After reading this article, you’ll be light-years ahead of most marketers. You’ll learn the unicorn moves in the brave new world of Facebook Messenger marketing — a world where the News Feed is a relic of history.

Facebook’s News Feed Is Dead: Here are the Facts

Let me lay out the issue in a single sentence: Facebook is restructuring all the leaders of their business to support a new focus on messaging and privacy.

The News Feed has been in decline for years. It’s final, gasping moments are at hand.

The ones to suffer most from the demise of News Feed are publishers — us, marketers, storytellers, businesses.

We get it. People don’t see our organic posts anymore.

But why this new round of outrage about the News Feed’s demise?

In the past, when the News Feed got dinged, it was usually preceded by a Mark Zuckerburg jeremiad about the loss of “friends and family at the core of the experience,” or a variation on that theme. 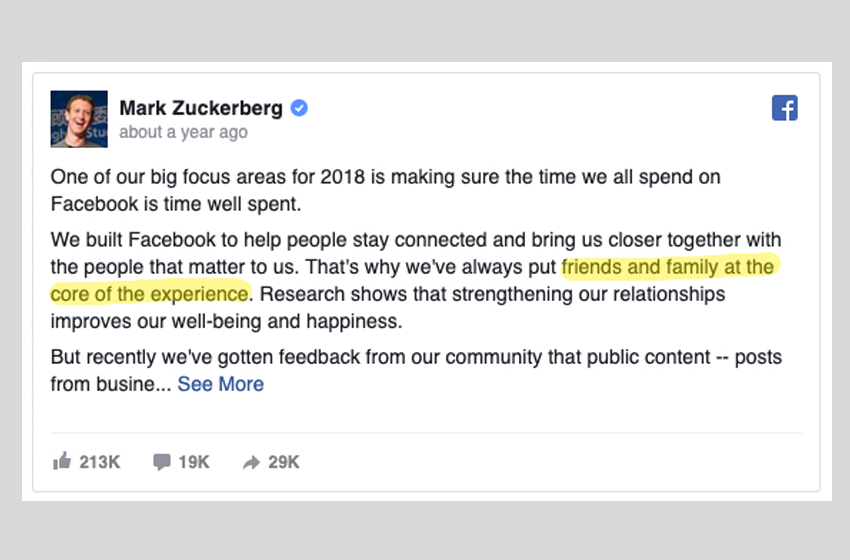 Of course, these laments masked the cold, hard truth for us publishers who got screwed by the algorithm changes.

Zuckerburg has made moves. Bold moves.

What kind of moves? Here’s the Facebook shuffle that has all taken place within the last year.

These names may not be familiar to you, but basically, a whole lot of billionaires were just let out to pasture. Taken together, they tell the shocking story about how Facebook is changing.

WhatsApp Cofounder Jan Koum Left Facebook a While Back.

Koum mushroomed into a billionaire when Facebook bought his and co-founder Brian Acton’s startup, WhatsApp. 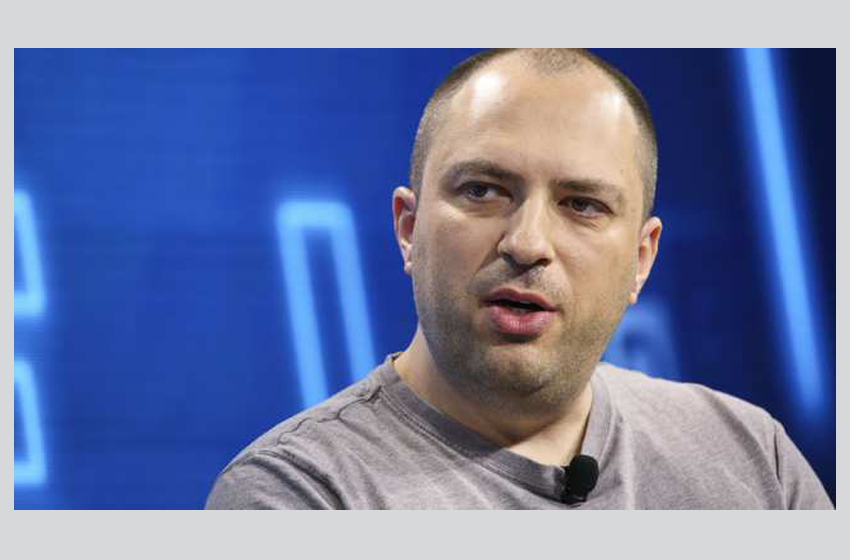 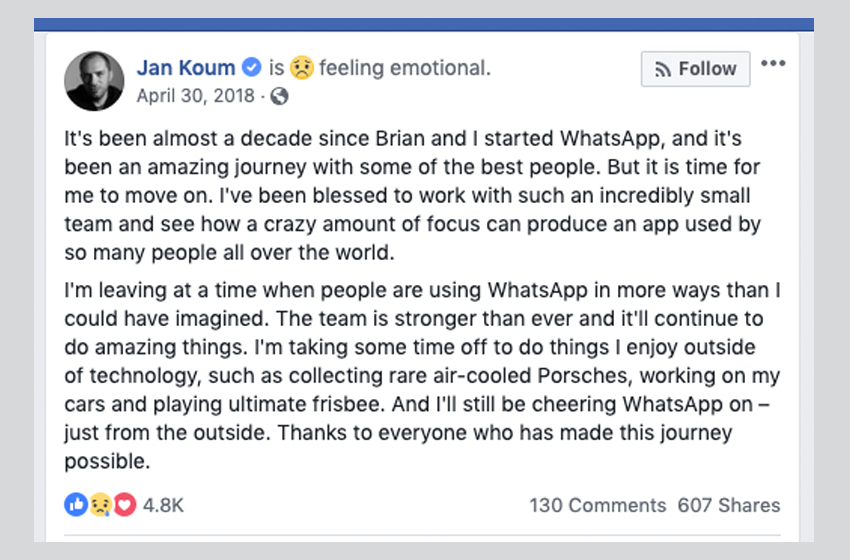 It was no secret that Koum and Facebook’s old guard crossed swords when Facebook started tinkering with WhatsApp’s most notable feature — ironclad encryption.

Chris Daniels just Resigned (March 14, 2019) after Recently Being Installed as the Leader of WhatsApp.

Daniels became Koum’s replacement but not for long. On the day that Fast Company called “ugly Thursday,” Daniels cleared out his desk and walked out the door. 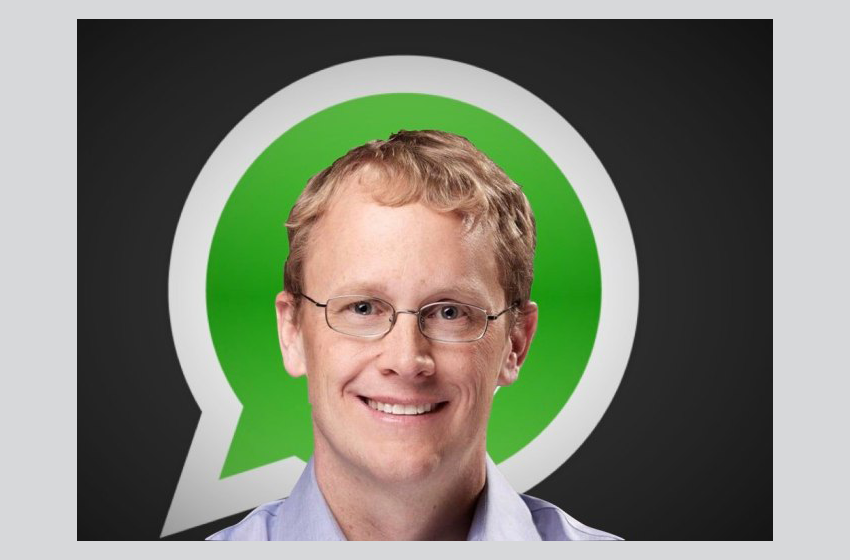 That’s a pretty big move for a guy who just got the equivalent of a Facebook corner office.

This is big news.

Cox was engineer hire number 13 at Facebook and he spent 13 years at Facebook. (Let’s not go all superstitious about the string of 13s.)

However, Chris Cox is the highest ranking company officer ever to resign. He held the Chief Product Officer role, just one door down from Ms. Sandberg, Facebook’s COO. 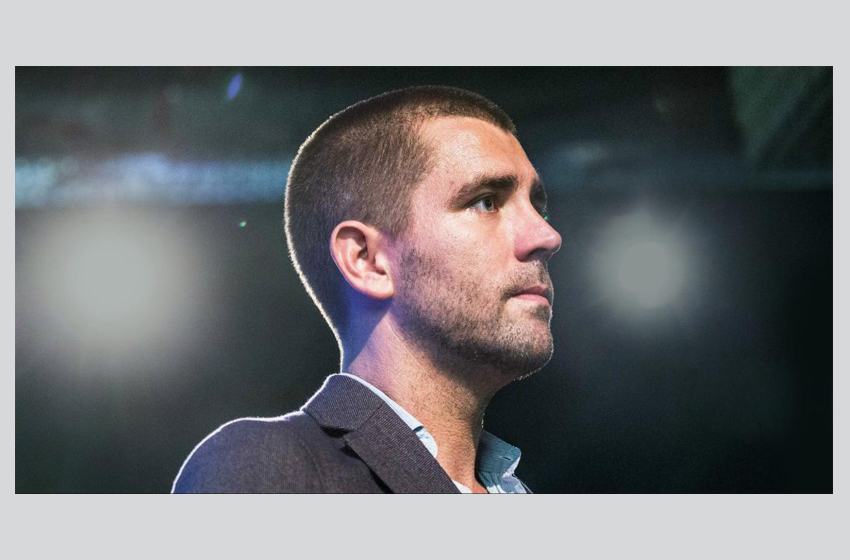 Chris Cox was a legend at Facebook — one of the most admired, and most trusted leaders the company knew. 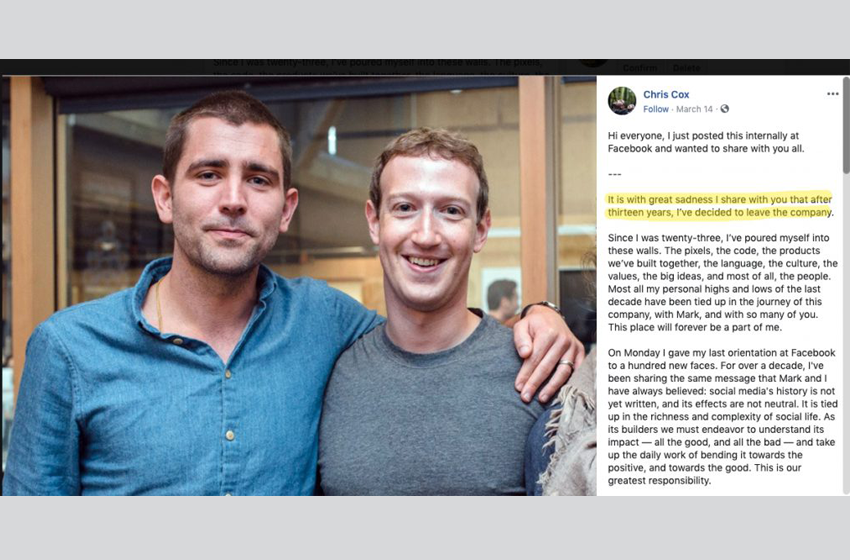 His leaving is no morale booster, that’s for sure.

Those are just some of the changes that have been going on in Menlo Park. In his typical saturnine style, Zuckerburg described a few of those changes in a Facebook Newsroom post.

Zuckerburg doesn’t upset the applecart for no reason.

As one Facebook insider reported, this “was a burn the boats moment — a symbolic point of no return intended to rally the company around a new existential imperative.”

The News Feed has reached the end of its influence as a Facebook feature. The Verge explained, it “[has] already peaked, or will soon.” And since Zuckerburg knew this, Zuckerburg killed it.

Folks, this is a very big deal.

What Does All of this Mean?

To put it simply, these organizational changes indicate a massive new shift in Facebook’s direction.

News Feed will most likely disappear entirely and be subsumed by the primacy of messaging. 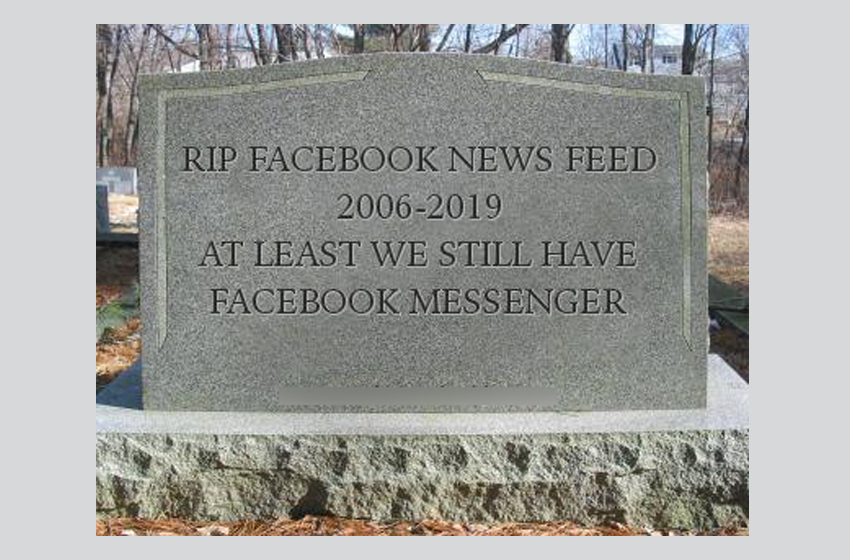 The News Feed has been a fixture of Facebook almost since the very beginning.

Thus, its sunsetting seems to make zero sense. Why would they bury it? It’s like Apple killing off the iPhone or Coca Cola discontinuing their Coke product.

One reason needs to be stated right off the bat.

The News Feed is really controversial.

If you think back on some of the momentous and headline-making news in recent years, Facebook’s News Feed has been caught up in it.

It’s hard to blame the News Feed directly for the outcome of the 2016 United States elections or as the cause for bloodshed in New Zealand. But the News Feed was there all along, and it’s no longer viewed as the bringer of truth and connection that it was intended to be.

And that needs to change. An algo tweak isn’t the change we’re talking about.

A dead News Feed is the kind of change that Facebook needs.

The News Feed is an existential legal threat to Facebook’s ongoing viability in the modern age.

So, that’s the negative side of things.

But obviously, Facebook is presenting a more positive standpoint.

Zuckerburg explained it (sort of) in his newsroom note. Here are the highlights from that release that shed light (sort of) on the rationale for the shakeup:

Is it beginning to make sense?

We saw this coming. We called it.

Look, as much as Mark Zuckerburg talks about human connection and family and friends, Facebook is a business. Businesses have to make money.

Facebook makes money, not from grandmothers fawning over photos of their grandbabies, but from businesses — the institutions that want to sell stuff.

And we businesses fork over a load of cash — billions of dollars each year.

The shift to privacy and messaging will contribute to a bigger and more solid revenue stream for Facebook. It has to. It’s the nature of business.

Instead of the News Feed, Facebook offers businesses the potential to use messaging to more effectively reach their customers. And, with all three messaging apps merging under a single infrastructure, businesses can reach more customers than ever before. 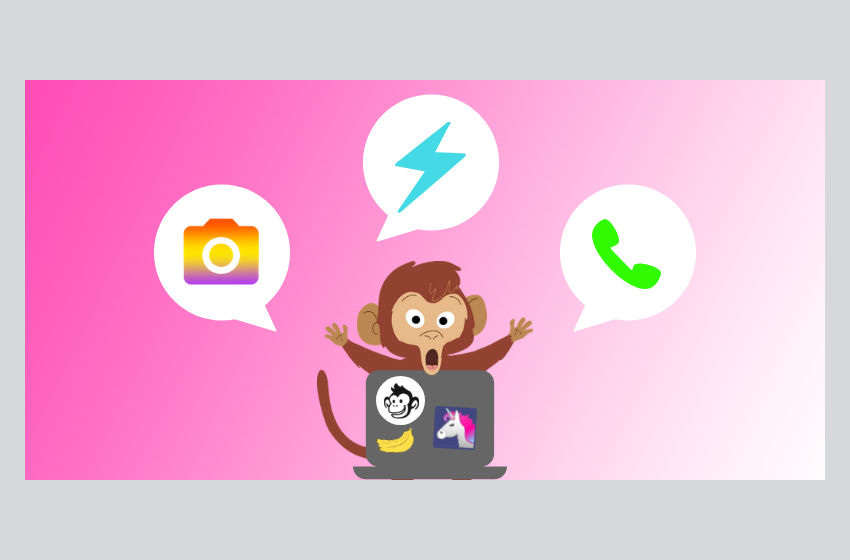 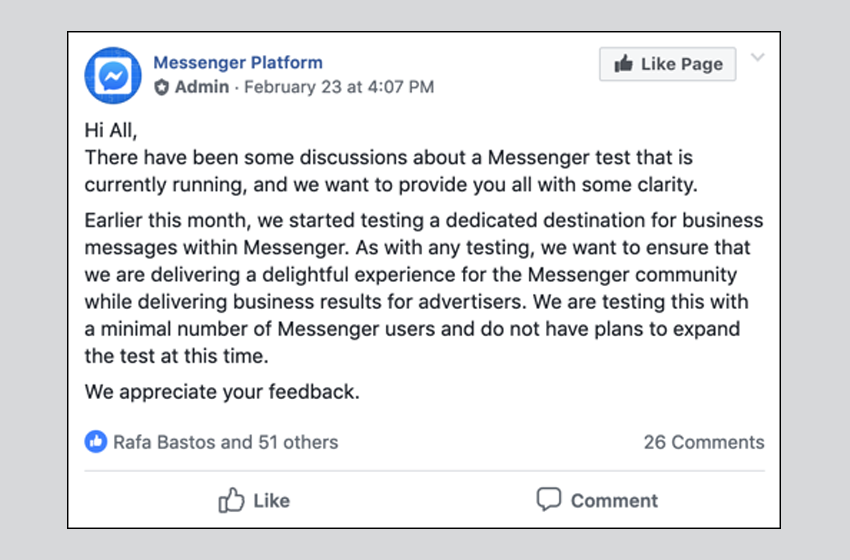 That’s a major nod to business revenue being the driving force for Facebook’s epic change.

But there’s another reason, and it comes as no surprise to Facebook. Email as a marketing channel is slowly dying. 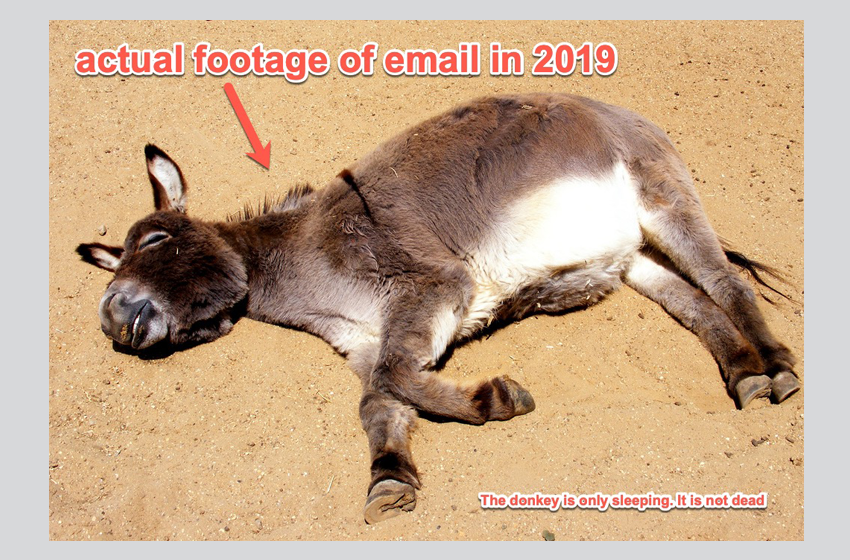 Every email marketer that I know is disgusted with abysmally low open rates and clickthroughs. Email is just not working.

Who’s responsible for poisoning the well of email marketing?

Rather than get all huffy about it, though, smart marketers are out there churning out Facebook Messenger chatbots, creating Messenger drip campaigns, sending chat blasts, and basically living in unicorn land. 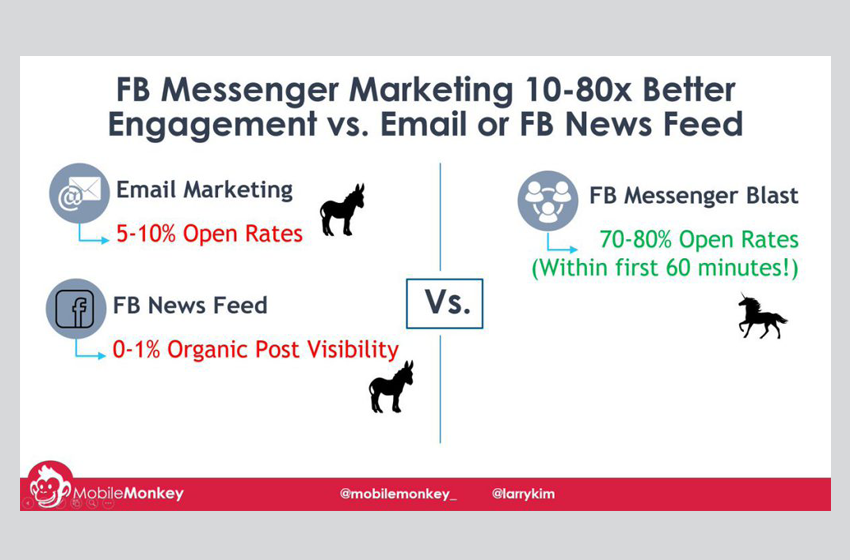 What does this mean for the future of Facebook marketing?

The future is not dire. The future is bright with unicorns prancing in fields of delicate purple and pink wildflowers. 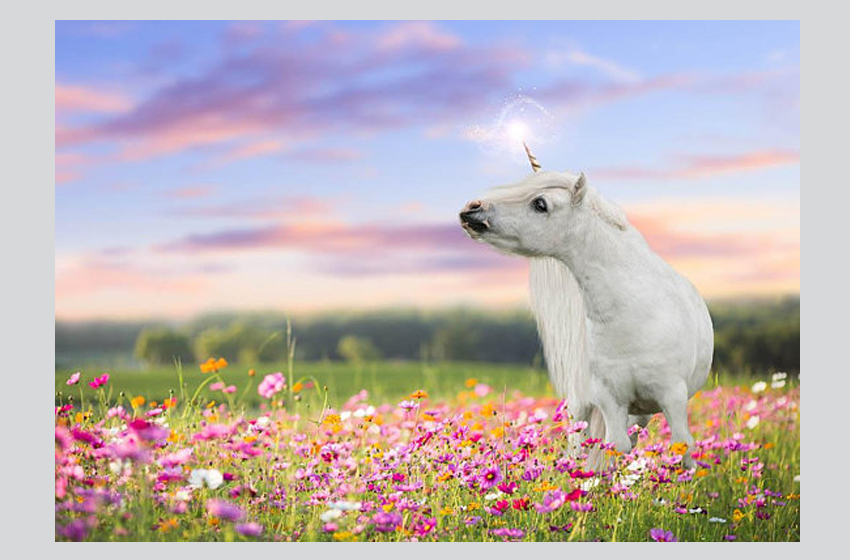 In fact, if you’re using Facebook Messenger marketing with chatbots, you have absolutely nothing to fear.

(But if you’ve been hoping that organic Facebook posting is going to cut it, then you’ll have to adjust your expectations.)

We’re in a new era of marketing ruled by Facebook Messenger, not the News Feed.

Here are four Facebook Marketing Power Tips that will add unicorn power to your marketing efforts.

If the News Feed is dying, what are you going to do?

Find a way to reach your customers that does not involve the News Feed, right?

Yes, and the most effective way to do this is through Facebook Messenger. 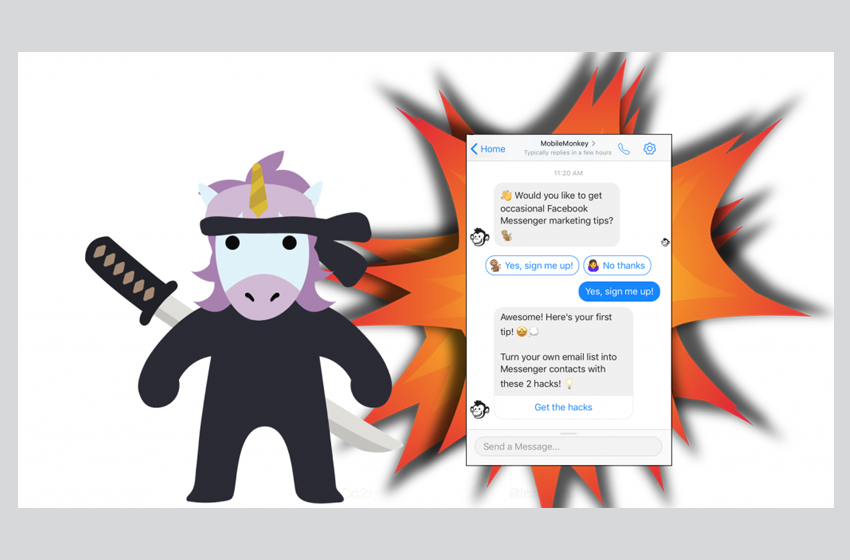 And the most effective way to use Facebook Messenger is with Messenger chatbots. 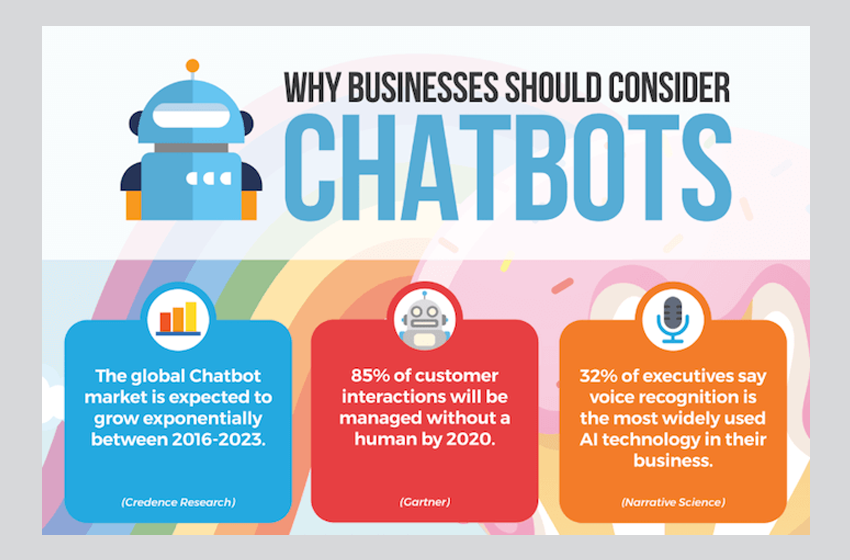 The days of getting tons of clicks, likes, and engagement from your organic posts are gone.

Yes, gratefully, there are loopholes that allow you to stay alive. 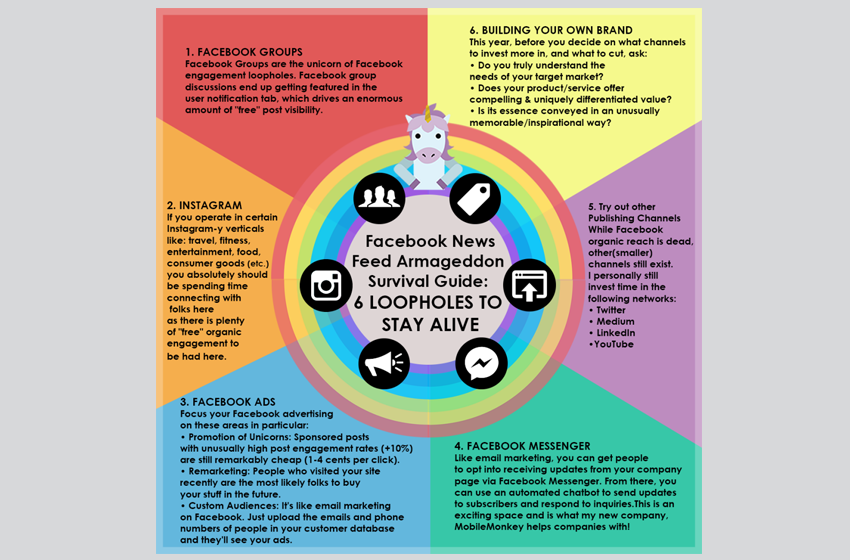 But the hottest opportunity of all is Facebook Messenger.

Quick disclaimer: Boosting posts is a legitimate method for maintaining your Facebook marketing presence as long as the News Feed gasps its final breaths. However, you need to be strategic about this.

Boost posts that have a comment guard on them. 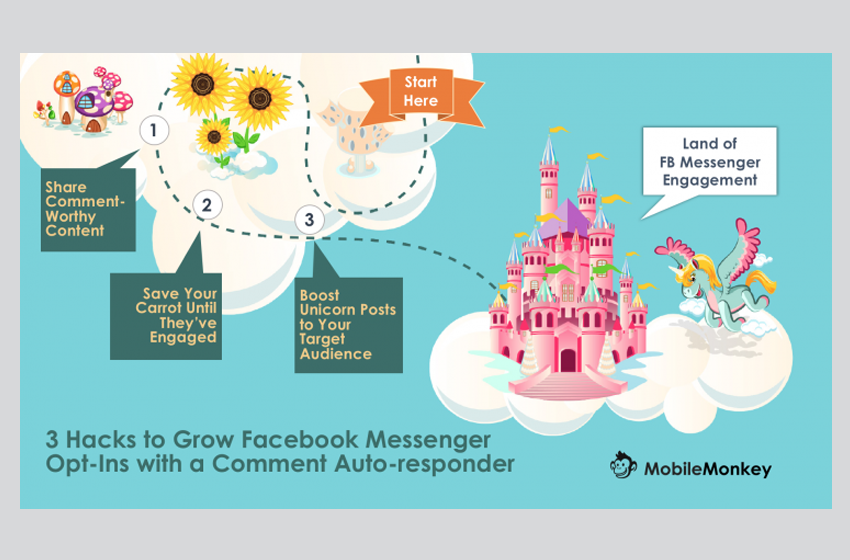 The reasons for this will become obvious if you Google “facebook messenger vs email.” 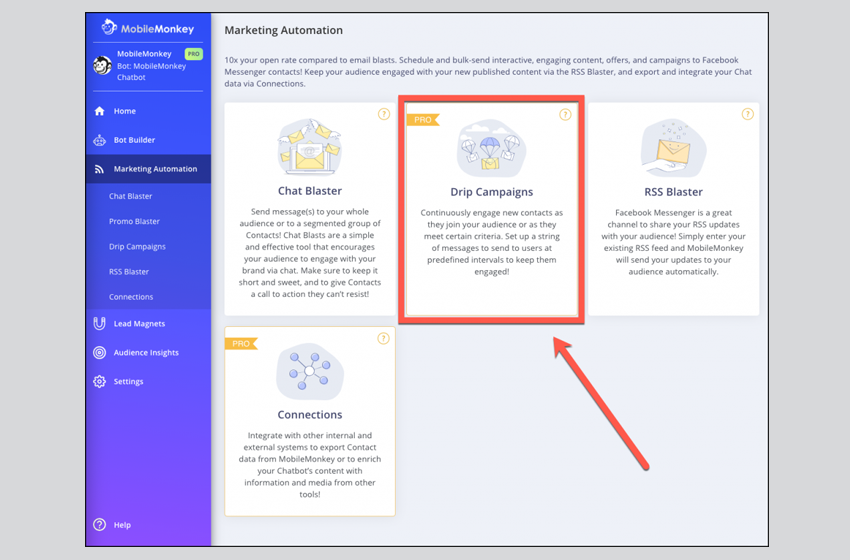 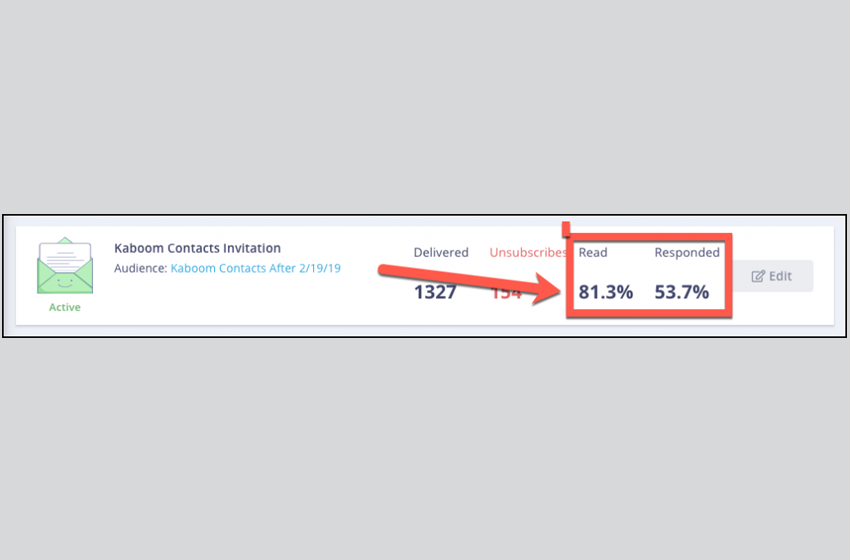 What about using a chat blast instead of or in addition to an email blast? 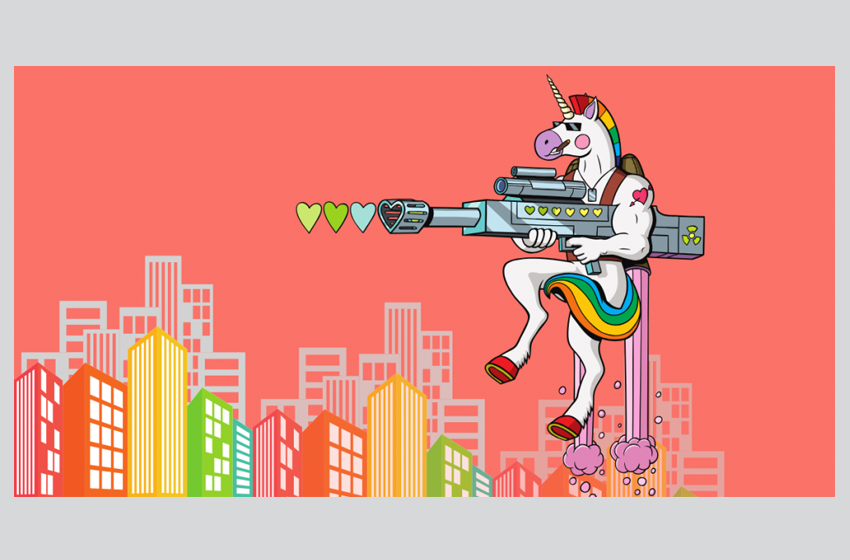 Easily create a blast that pings your Messenger contact list with news, tips, or a topic that’s on your mind.

Once again, with engagement rates like these, it’s unfathomable that you would not use Messenger bots. 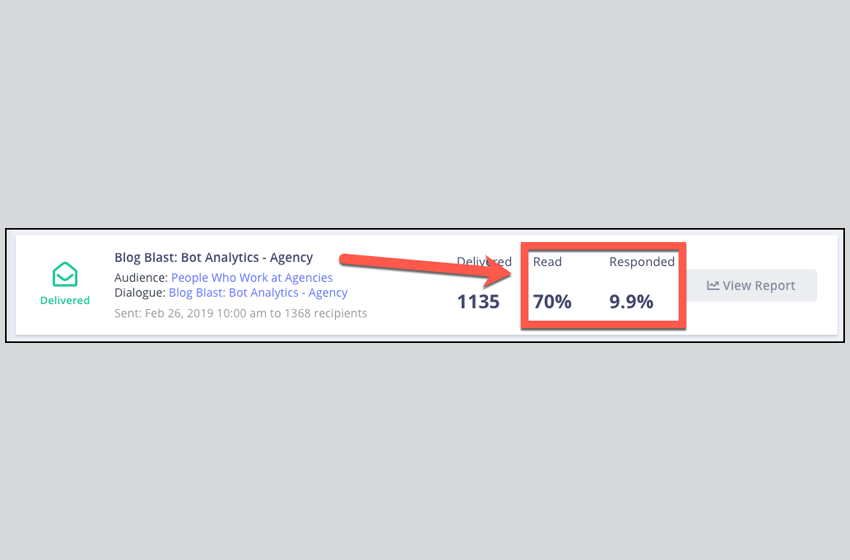 The death of the News Feed signals a new beginning for messaging. Facebook’s pivot to messaging is concurrent with the nadir of email marketing’s effectiveness.

Now is the time to jump into messenger marketing like your marketing success depends on it.

Back in the day, email list building was everything.

Those days are long gone.

It’s easier, cheaper, and the results are far more effective.

Every month, I gain around 5,000 new Messenger contacts. For free. 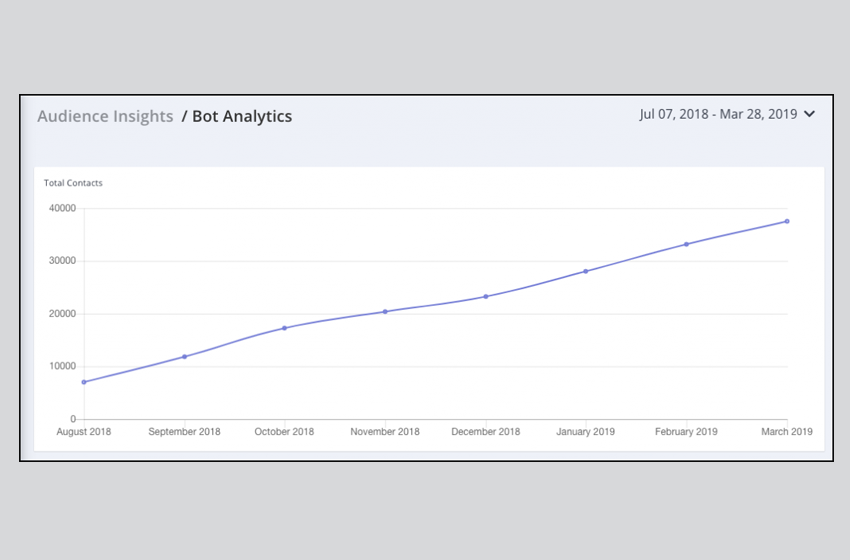 Most of this happens on autopilot. I’m sure you’ve seen the chat widget in the lower right-hand corner when you’re on the MobileMonkey website.

If you have a WordPress site, you can add the chatbot to your website for free. 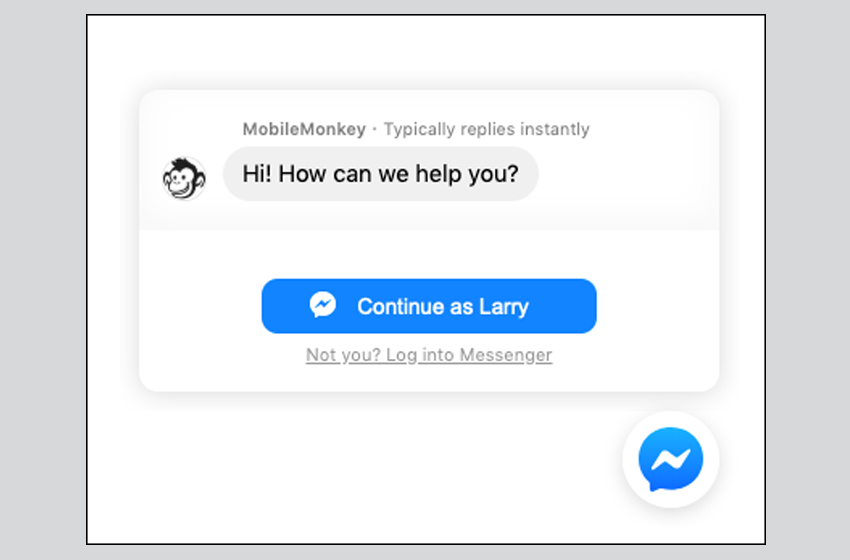 It’s as simple as that.

One of the most innovative and powerful tech companies in the history of humankind is shifting its focus right before our eyes.

Facebook is killing off its most innovative and enduring feature.

They are pivoting to messaging.

This reality shapes the way that you engage and connect with your customers. Stay ahead of the curve by building your presence on Messenger, creating Facebook Messenger chatbots, and making marketing progress like you’ve never experienced before.