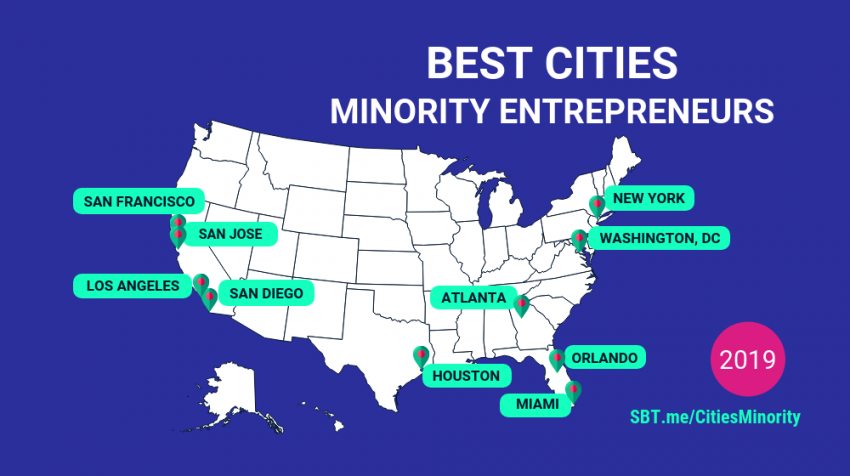 Miami and Los Angeles are just two of the major U.S. cities where minority entrepreneurs are thriving. But would the nation’s capital have been at the top of your list?  Or Orlando?

Our 2019 rankings of the Best Cities for Minority Entrepreneurs identify the top 10 cities for startup owners of color and minorities.  The cities in the top 10 rankings may surprise some people, but perhaps not other people

Our rankings are based on our latest research of U.S. Census data. The rankings reflect the percentage of entrepreneurs to the overall population in metropolitan areas of the United States. We also identify factors such as industry clusters, lifestyle, infrastructure, costs, workforce availability and a thriving startup community.

Read on for the Best Cities for Minority Entrepreneurs, 2019 edition.

Sometimes called the capital of Latin America, Miami is also a capital for minority entrepreneurs. 62,992 of them work in the metro area. That makes them 1.03% of the total population working mainly in the retail trade sector.

But opportunities in the city go way beyond a single market. Miami is also a major international trade center. And Miami International Airport and PortMiami provide two of the nation’s busiest ports of entry. The city is also a hub of Spanish language media.

The second largest city in the U.S., also hosts the second largest percentage of minority entrepreneurs, with 114,509 operating in the metro area, or .86% of the population. They work largely in healthcare and social assistance.

Entrepreneur and business consultant Rieva Lesonsky, the CEO of SmallBizDaily and GrowBiz Media, thinks the ranking is well deserved. “California is populated by so many people who moved here — from other states and other countries, making many of us comfortable with taking on risk. Los Angeles’s official name is literally translated as the City of Angels, and has long attracted people in pursuit of a dream. While “making it in Hollywood” is not your typical goal, it still symbolizes the concept that dreams can come true.”

At the heart of a major techno hub, the metro area is also home to 16.705 minority entrepreneurs. They make up .84% of the population and work mainly in the professional, scientific and technical services.

Far more than just another technology center, San Jose has been called “Capital of Silicon Valley” for its cultural, political and economic influence in the region.

The Bay area is more than just a center for culture and tourism. It also provides a home to minority entrepreneurs. After all, 34,409 of them, (making up .73% of the population) work there, mainly in the accommodation and food services sector.

The San Francisco metropolitan center also happens to be the home base for some of the best known technology brands on the planet. Think Craigslist, Google, Facebook, Dropbox and FitBit, to name a few.

New York City is famous for many things, but perhaps the number of minority entrepreneurs should be one of them. There are 131,340 to be exact, (about .65% of the population) mostly working in the retail trade.

New York City’s ranking makes sense to local entrepreneurs like Ramon Ray, who is the self-employed author of Celebrity CEO, and a speaker and business evangelist, says, “New York is a melting pot of so many cultures and ways of life with a huge small business support system.” And Ray says this is one of the reasons the city has become a center for minority entrepreneurs.

In addition, Ray also points out that New York is a media capital. “You just can’t get the media coverage opportunities you get here anywhere else.”

Who knew the nation’s capital would also be a hotspot for minority entrepreneurs? 35,011 of them work there. That’s .57% of the population. And most work in professional, scientific and technical services.

Washington D.C. is a growing and diversified economy. But it shouldn’t be too surprising that tourism is second only to government-related businesses as the city’s most important industry. The city is believed to draw more than 18 million visitors annually generating more than $4 billion.

Renowned for its world famous zoo, the metro area should also be known for the 16,286 minority entrepreneurs who operate businesses there. These entrepreneurs make up .49% of the San Diego metropolitan area’s population. And they work largely in the healthcare and social assistance industries.

The city is also home to many major defense contractors which make up one of its major industry clusters. Major companies in this cluster include General Atomic, Cubic and NASSCO.

This Texas metropolis also is big with minority entrepreneurs — 32,609 of them. They make up .48% of the cities population serving mainly in the retail trade.

See Also: This Top Ranked City for Entrepreneurs Might Surprise You

Pete Detlef, Managing Partner of 24 Hour Translation Services, sees opportunity as limitless in  Houston.  “As the fourth largest city in the U.S., Houston was named the most diverse city in America this year and is the new great melting pot of culture, language, ethnicity, income, education, religion and industry.  As a measure of diversity, there are over 145 languages spoken in Houston.”

Detlef says this diversity creates a fusion of arts and thinking like nowhere else leading to the development of many successful businesses in the metropolitan area.

The home of the Atlanta Braves is also home to 26,653 minority entrepreneurs. That represents .46% of the region’s population. And most work mainly in retail trade.

John Lawson, CEO, ColderICE Media believes he understands the reason for the ranking. “Atlanta is one of the best cities in the country for entrepreneurs. However the cherry on top for minorities is that this city is 54% African American. That should say it all! Can you name another city where the makeup and leadership is so populated with minorities and people of color? A primarily African American city that is thriving and moving up in opportunity this rapidly? NOPE…Atlanta is an ecosystem where you and your business dreams and goals can thrive.”

It may be known for its theme parks but the metropolitan center is also home to 11,207 minority entrepreneurs (.46% of the population) working mainly in the healthcare and social assistance industries.

As Barbara Weltman, President of Big Ideas for Small Business, Inc. explains, “Orlando is the center of Florida. For years it’s been associated with entertainment: Disney World and Universal Studios. That’s still true. But now it’s also a hub for tech and is located close to the Space Coast where things are really heating up. There’s been a huge population influx, from those relocating from the north to Puerto Ricans coming after Hurricane Maria. The state government here is supportive of small business. There’s no personal income tax on owners and various other business taxes (e.g., rent taxes) have been going down in recent years. There’s just a great buzz that this is THE place to be!”

If you are a minority entrepreneur thinking of starting a business or just got one off the ground, and you are located somewhere else, no worries.  There are plenty of opportunities all over this great country. But if you want a support system of minority entrepreneurs for mentoring, any of the above cities would be good ones to locate in or near.

This Best Cities for Minority Entrepreneurs ranking is based primarily on our proprietary analysis of the U.S. Census Bureau’s Annual Survey of Entrepreneurs (ASE) and Annual Estimates of the Resident Population for Incorporated Places of 50,000 or More.

Check out our infographic below for a shareable summary of the best cities for minority entrepreneurs.

Shawn Hessinger is the Executive Editor for Small Business Trends. A professional journalist with more than a decade of experience in the traditional newspaper business, he has another 10 years of experience in digital media for trade publications and news sites. Shawn has served as a beat reporter, columnist, editorial writer, bureau chief and eventually managing editor with responsibility for nine weekly newspapers, the Berks Mont Newspapers. He is also a member of the Society of Professional Journalists.