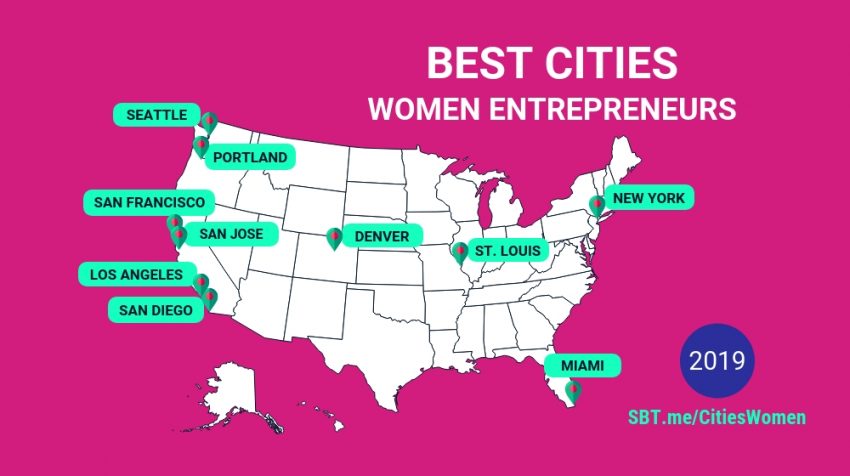 Women-owned businesses are on the rise. Just look at the numbers. The number of women owned small businesses with employees increased by 2.8 percent, according to the latest U.S. Census Bureau’s Annual Survey of Entrepreneurs. But where are these women entrepreneurs?

In our latest research, we delved into the numbers to see which metropolitan areas of the U.S. have the highest concentrations of women entrepreneurs. Our original research examines the number of women entrepreneurs working in the area and how that number compares to the total population. We also identify factors such as industry clusters, lifestyle, infrastructure, costs, workforce availability and a thriving startup community. Read on for the Best Cities for Women Entrepreneurs, 2019 edition.

Though it may be known primarily for its memorable architecture and beautiful beaches, Miami is also a haven for women entrepreneurs. There are 36,925 women entrepreneurs in the Miami metropolitan area making up .60% of the total population, working in the professional, scientific and technical services.

With an average temperature of 77 degrees and 249 days of sun each year, Miami fosters a fun and relaxed lifestyle. Casual attire is the norm among many entrepreneurs – imagine going to work everyday in shorts, sandals and light shirts. Add the lack of a state income tax, and this city is a magnet for women entrepreneurs.

The Mile High City of Denver is also a summit of women’s entrepreneurial achievement. With 15,102 women entrepreneurs, that’s a full .53% of the population running their own businesses.  Many of these women-owned businesses are in the professional, scientific and technical services.

With industry concentrations like aerospace and bioscience, Denver may be the perfect destination for entrepreneurs seeking to find clients in these industries. And with a median annual income of over $76,000, the area has plenty of affluent professionals to target if you sell consumer products and services.

Copious outdoor activities contribute to an enjoyable lifestyle. Skiing and hiking in the Rocky Mountains are popular, as are biking and horseback riding. The city itself always offers something to do, with shopping, major league sports, art galleries, museums, fine dining and more.

St. Louis is known as the Gateway to the West. And women entrepreneurs are also pushing frontiers as 13,619 of them run businesses in the city making up .49% of the city’s population, many working in healthcare and social assistance.

The city of angels shelters 63,850 women entrepreneurs under its wings. But that represents only .48% of the city’s population, with many working in healthcare and social assistance.

Entrepreneur and business consultant Rieva Lesonsky, the CEO of SmallBizDaily and GrowBiz Media, thinks the ranking is well deserved. “The fact the Los Angeles region is one of the best cities for women entrepreneurs is not surprising to me. Women in LA have long held powerful positions in the media and movie industry — Mary Pickford was one of the most powerful women in the nation and that was in the early part of the 20th century, before women even won the right to vote. Pickford once said, ‘You may have a fresh start any moment you choose, for this thing that we call ‘failure’ is not the falling down, but the staying down.’ That’s how I feel about LA — there just seems to be endless possibilities,” Lesonsky says.

The city’s motto is “Keep Portland Weird.” But the city is also keeping women entrepreneurs busy with 11,492 of them doing business in the metro area, .47% of the city’s population, working mainly in the professional, scientific and technical services.

Portland is home to many small businesses including reputedly the largest independent bookstore in the world and a large number of local breweries. But what’s more, the city posts a “new business welcome kit” offering a simple way to view all relevant fees or licenses the city may require, information on how to contract with the Portland Bureau of Transportation and even a graffiti removal program to cut down on the costs of vandalism.

The Big Apple has a big group of women entrepreneurs — 95,731 in all but just .47% of the total population — in the New York metropolitan area, working in other services excluding public administration.

Ramon Ray, who is the self-employed author of Celebrity CEO, and a speaker and business evangelist, says, “New York is a melting pot of so many cultures and ways of life with a huge small business support system.”

Additionally, Ray points out that New York is a media capital. “You just can’t get the media coverage opportunities you get here anywhere else.”  Women entrepreneurs who are looking to build their personal brands and business brands could have advantages in New York City.

With businesses like Microsoft and Amazon based in the metropolitan area, it’s no surprise Seattle  is a haven for women entrepreneurs. The presence of large companies tends to create an ecosystem of alumni who branch out on their own and in turn serve the large companies and their thousands of employees.

Seattle has 17,620 women entrepreneurs or .46% of the population. The largest industry groups you will find these females entrepreneurs in are the professional, scientific and technical services.

Seattle also has excellent infrastructure to support today’s entrepreneurs. For example, it is one of the most gigabit-ready cities, offering gigabit broadband internet service to residents and businesses.

It may be known for its Victorian architecture and iconic Golden Gate Bridge, but San Francisco should also be known for women entrepreneurs blazing new trails. The metro area is home to 20,813 of them. That’s .44% of the region’s population.

Between 1846 and 1852, thousands streamed into the city creating a boom town thanks to the discovery of gold in California. Today, thousands of women entrepreneurs seek their own fortunes in the city.

Located in California’s Silicon Valley, the area is already known for tech entrepreneurs. And there are women entrepreneurs too. There are 8,639 of them, or .43% of the population, working mostly  in healthcare and social assistance.

Though known for its warm climate, San Diego is packing some other heat too. The metro area is home to 14.086 women entrepreneurs, making up .42% of the area’s population. They work mainly in the professional, scientific and technical services.

San Diego is also known for its lifestyle centered around good weather, food and fitness. Several significant business clusters nearby attract women entrepreneurs. This is particularly true of those working in the tech or B2B space.

Business owner Eric Strate, the founder of Web Design San Diego, explains, “San Diego is also home to a large military contingent, and biotech and tech companies like Qualcomm.  So, our city is growing, and there are plenty of opportunities for business-to-business or business to consumers.”

If you are a woman thinking of starting a business or just got one off the ground, and you are located somewhere else, no worries.  There are plenty of opportunities all over this great country. However, if you want a support system of female entrepreneurs for mentoring, any of the above cities would be good ones to locate in or near.

This Best Cities for Women Entrepreneurs ranking is based primarily on our analysis of the U.S. Census Bureau’s Annual Survey of Entrepreneurs and Annual Estimates of the Resident Population for Incorporated Places of 50,000 or More.

Check out our infographic below for a shareable summary of the best cities for women entrepreneurs.