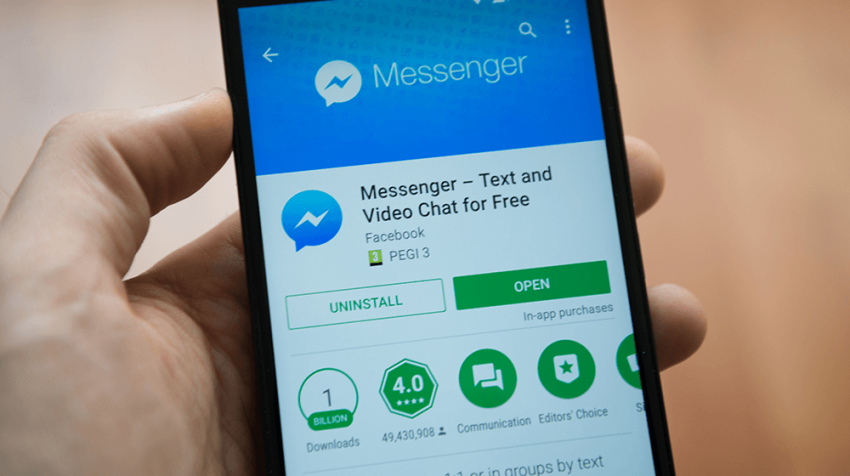 When it comes to Facebook Messenger chatbots, we as marketers are in the thick of it. We’re devising Messenger strategies, assembling chatbot sequences, and racking up wins for our companies and clients.

But what’s the future of Facebook chatbot marketing? We have some predictions.

Crystal balls not being readily available at the time of writing, I made these predictions based on data, trends, and history (the “repeats itself” bit). We’re not a rumor blog, so there’s none of that here.

Here are 14 predictions — some possibly surprising — about Facebook Messenger marketing and chatbots.

1. Chatbots will outperform any other marketing channel.

I thought we’d start out with an easy one.

Prognostications aside, this is a present fact.

I don’t have an accurate way to measure all the marketing channels known to humankind, adjust for all differences, and create an eternal and irrefutable decree.

But I do know that Messenger open rates and engagement levels completely outstrip any other marketing tactic or channel that I’ve used.

2. More businesses will sell goods and services directly in Messenger.

If you’ve ever created a Messenger chatbot or played around in Messenger, you know that it’s a powerful platform. It’s not just messaging. It’s everything.

And, as Messenger expands both its user base and functionality, it’s going to become easier for businesses and customers to transact directly within the app.

Businesses are always looking for ways to sell their products easier, with fewer contingent costs, complications, and overhead. Messenger will present itself as a powerful way to do this.

Whether it’s a business offering a consulting retainer agreement or a custom-built snowboard, Messenger will make it happen.

What we’ve observed through the Facebook shakeup, the implosion of the News Feed, and the sundry proclamations of Zuckerberg is that Facebook is laser-focused on expanding and improving Messenger.

Why? Because the monetary beneficiaries of Messenger are businesses.

Messenger chatbots are already enormously powerful, but their capability is set to grow as Facebook lavishes businesses with more messaging autonomy, freedom, capability, and features.

4. Businesses will divert funds from conventional display ads, and will spend more on click-to-Messenger ads.

Many businesses have wised up to the fact that traditional display ads have withered up.

Because of this, more businesses will use their advertising dollar to purchase click-to-Messenger ads. In doing so, they stand to benefit from more long-term engagement with customers, a growing Messenger contact list, and lower CPA.

At MobileMonkey, we stopped spending money on engagement ads or traffic ads. Instead, we rally up Messenger contacts like crazy. 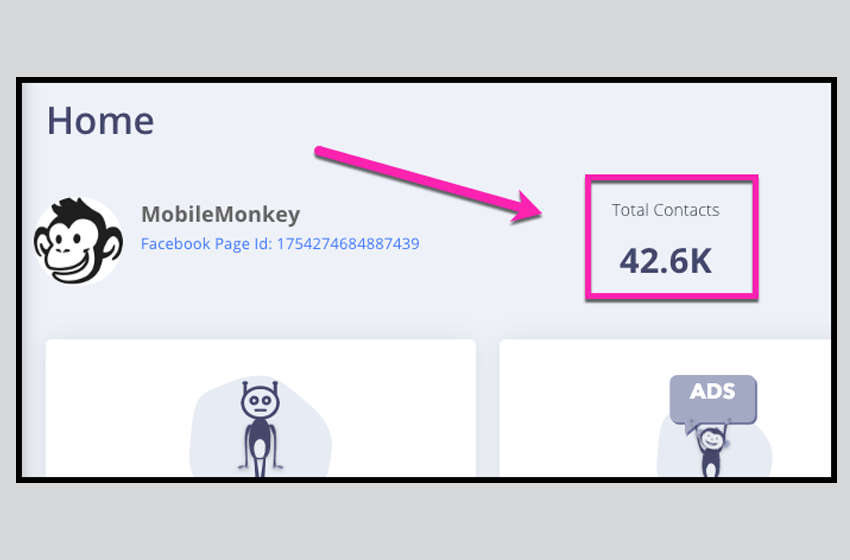 Those forty-two-thousand-and-counting contacts aren’t passive. They stay engaged and excited, which is why we get 80% open rates in the first sixty minutes on our chat blasts.

And with it, we’re seeing the necessity of engaging those users.

A contact list that sits in a database and gathers database dust does nothing for your business. Thankfully, Messenger chatbots have so much value and features that it’s easy to keep users engaged.

Gifs in Messenger anyone?

Tools like MobileMonkey’s chat blaster are designed exactly for this purpose. With the blaster, you can send a message to your entire mailing list, a segment, or whatever. 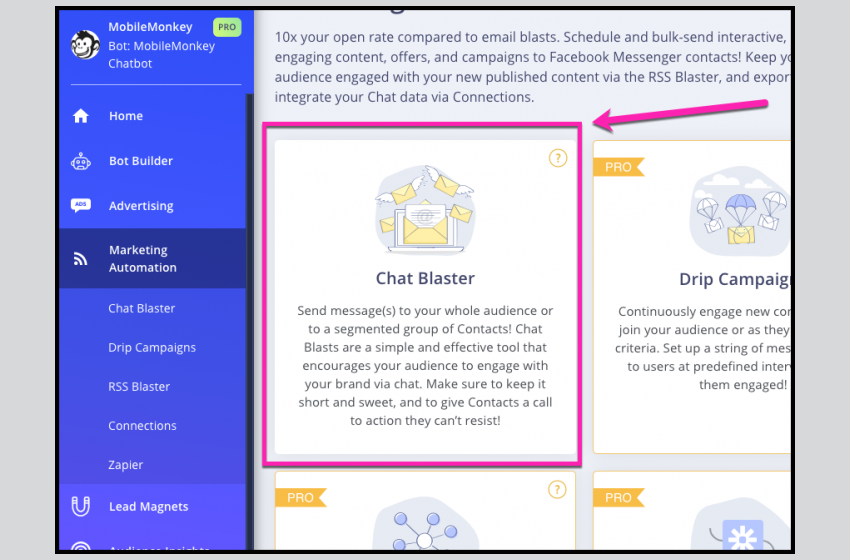 It’s getting even better. Since this is a growing trend, I think we will begin to see even more creative ways to keep a contact list hot.

I’ll be blunt. Website chat widgets are an absolute waste. Unless it’s a Messenger chatbot widget.

Here’s my logic. The marketing value of engaging a proprietary chatbot on a business website ends once the chat ends. The customer is gone. The interaction is over. You don’t have a name. You don’t have an email. It’s a one-and-done. And that’s it.

Consider, by contrast, a Messenger chatbot widget. When a potential customer opens up a Messenger conversation from your website, they are a contact in perpetuity.

That sheer logic is why we’re seeing a rapid increase in the downloads of the leading WordPress chatbot plugin, the WP Chatbot.

Businesses realize that it’s worthwhile to engage users on their website using Facebook since that’s how customers prefer to interact. Plus, it does not create an undue burden upon customer service, since the messaging is entirely bot-driven.

8. Virtually all of a business’s interaction with customers will be bot-driven. (And most of that will happen on Messenger.)

Gartner famously predicted that by 2020, the majority, 80%, of customer/business interactions will be handled by AI. In other words, chatbots.

(Cue the scary organ music and the coming mayhem when robots replace humans. But please note that this is actually a good thing. Instead of hurtling towards AI apocalypse, sorry Elon, Bots create opportunities for humans to do more humanesque things.)

And, speaking of humanesque, chatbots do a darn good job of sounding just like Betty in customer service. 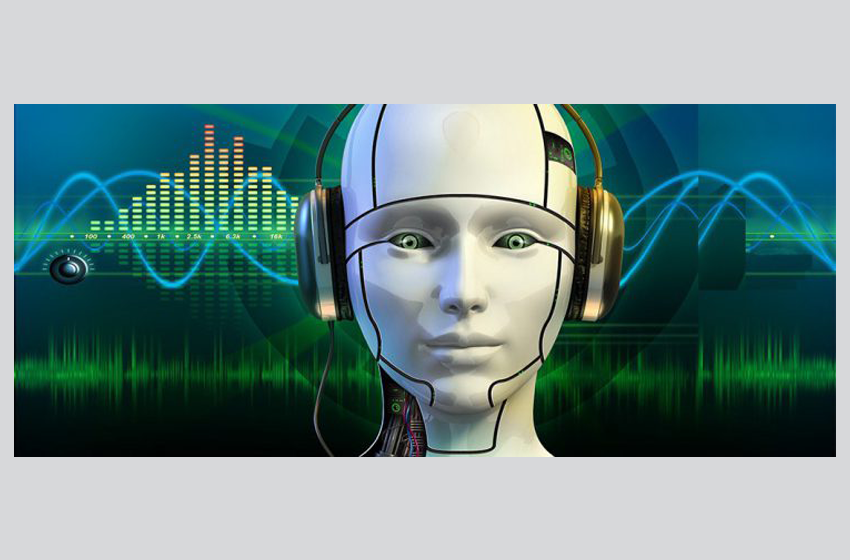 Thanks to chatbot builders like MobileMonkey, building a customer service chatbot is easy. The simple drag-and-drop interface means zero coding and more power to you. 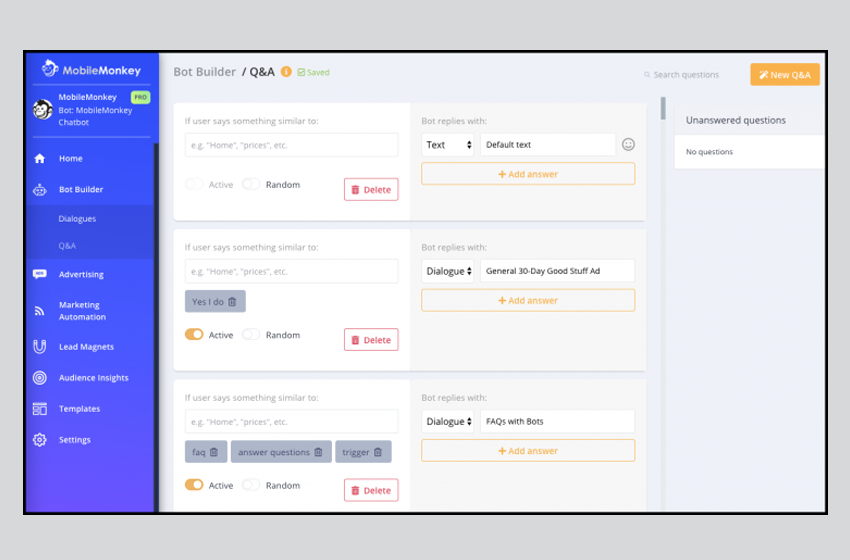 To sprinkle a little dog-eat-dog brutishness in this article, I now declare that Messenger chatbot early adopters will rule the marketing scene.

I say this, not because I happen to work for a startup that benefits from the increased uptake of Messenger marketing, but because it’s true.

We have data at MobileMonkey proving that businesses who are using Messenger chatbots are vastly outperforming businesses that aren’t.

10. More individuals and influencers will create Business Pages and start using Messenger chatbots in their marketing.

The rise of the influencer industry has shaped many marketing trends.

Many of these influencers are happy to stick with Instagram alone, since doing yoga in Tulum or Mykonos is just so Instagram-worthy. 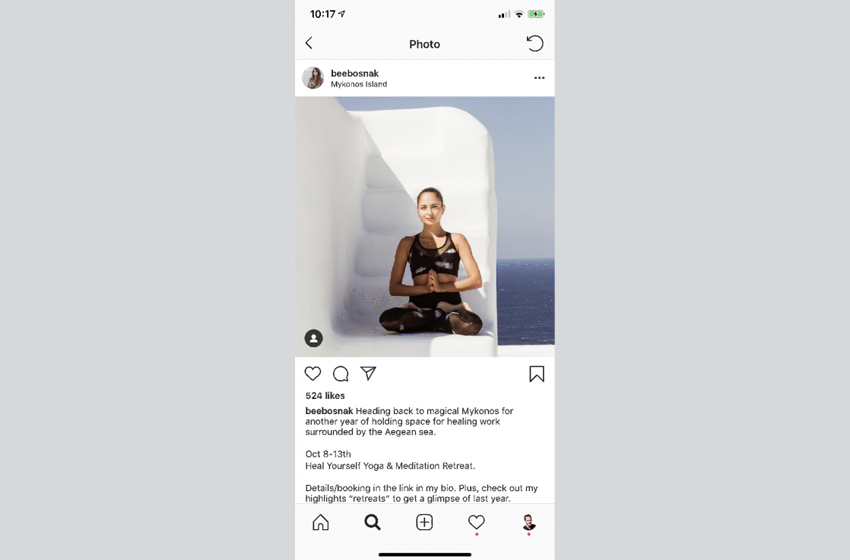 But now there’s an appealing reason for these influencers and other marketing-minded influencers to add a Facebook Page to their marketing arsenal: chatbots. 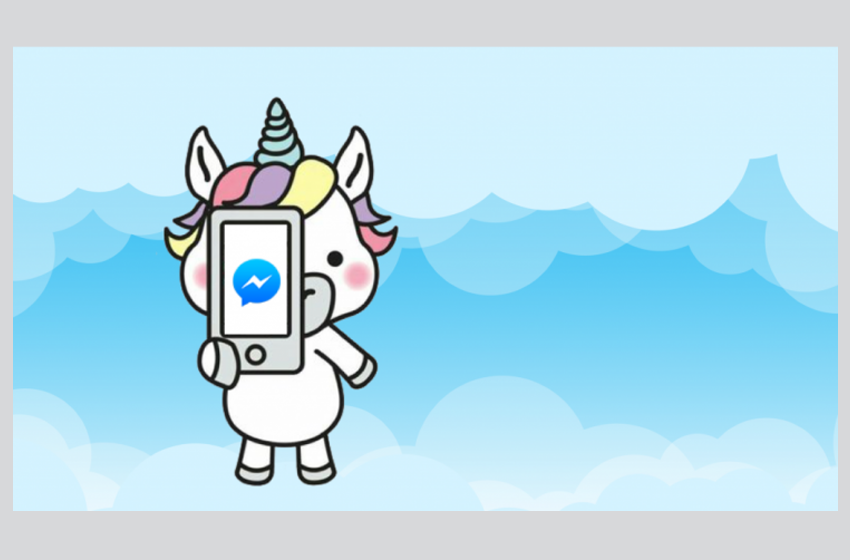 Many of today’s influencers and micro influencers are marketing virgins. They aren’t trying to build email lists or segment audiences as much as they’re just looking to grow followers and establish loyalty.

As Instagram merges with Messenger, more of these influencers will understand how chatbots can help them achieve their goals of growing followers and establishing loyalty.

And since chatbots are only available to Business Pages, more of these influencers will start their a Page and use chatbots.

11. Chatbots will be functional across three platforms — WhatsApp, Instagram, and Messenger. 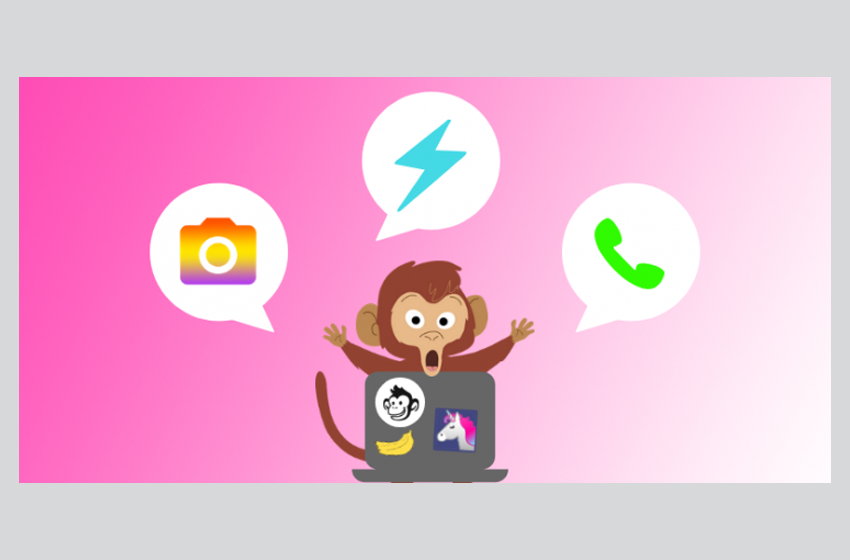 What this probably means is that soon we — chatbot savvy marketers — will be able to create one chatbot sequence and release it simultaneously to users on all three platforms.

This move will expand the audience reach of chatbots, and it will probably mean a reconfiguration of how Messenger, WhatsApp, and Instagram messages look and feel. (See my next prediction.)

12. The Messenger interface will change.

I don’t envy the developers who are trying to stitch together Messenger, WhatsApp, and Instagram. I don’t code, but I imagine that the integration of the three would be a daunting task.

As the messaging components of the three apps are integrated, it’s probably going to mean that each of the three user interfaces will change.

The comfortable and stable WhatsApp screen will shift. Familiar Messenger swipe patterns will change. And Instagram’s messaging features will probably get a facelift. 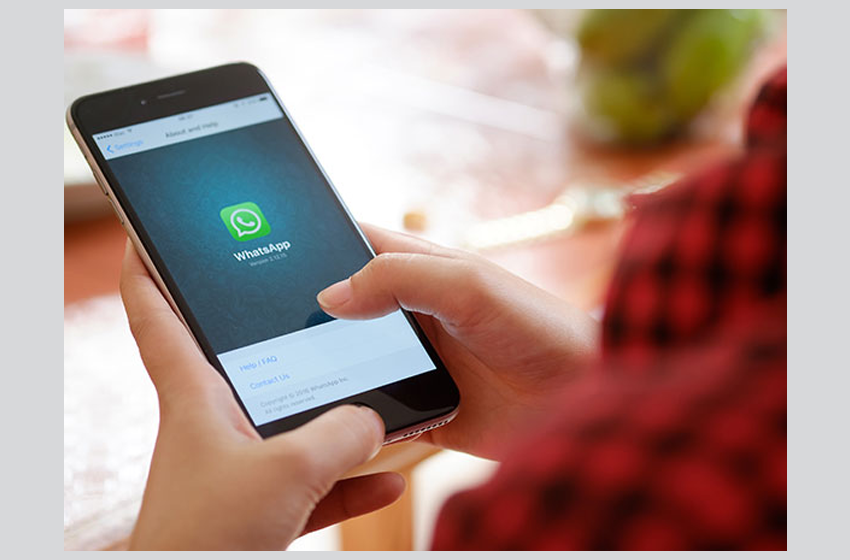 Each of the apps has messaging capabilities that aren’t available on the others. These may not disappear, but they will most likely shift to adapt to the merge.

13. Facebook will introduce measures to add a monetization model to businesses using Messenger.

This prediction is just business logic.

Right now, it’s evident that Messenger is the future of Facebook. Apart from click-to-Messenger ads, there’s not a whole lot of monetization going on in the Messenger world.

Meanwhile, revenue from display ads are starting to go flat. Axios made this report a few months ago:

Executives have been warning investors for months that these ads are nearing a growth ceiling on its main app. And analysts say engagement on Facebook’s main app (where it sells most of these ads) is declining, which puts even more pressure on the tech giant to quickly find new sources of revenue.

“New sources of revenue,” you say? There’s gold in them thar Messenger hills.

Somehow, someway, Facebook will begin to make money from the businesses who are growingly dependent on Messenger.

What will this look like specifically? It’s too early to tell, especially since Messenger’s functionality is still in flux.

First, Facebook needs to create a dependency upon Messenger. At that point, the business development experts at 1 Hacker Way will have a big meeting and start testing their ideas.

At some point, expect that Facebook will begin to take a monetary share of all that success you’re experiencing with Messenger marketing.

14. Facebook will develop a cryptocurrency that allows users to easily transact goods, products, services within the Facebook ecosystem.

Full disclosure: The monkey is at risk of compromising the integrity of the limb on this one, but it makes for an interesting thought. And, yes, I do have reputable news sources linked below, like Bloomberg.

So here’s where I’m coming from.

As of April 22, 2019, Facebook was hiring for 25 blockchain-related positions — from attorneys to security engineers located in offices from Menlo Park (mostly) to Tel Aviv. 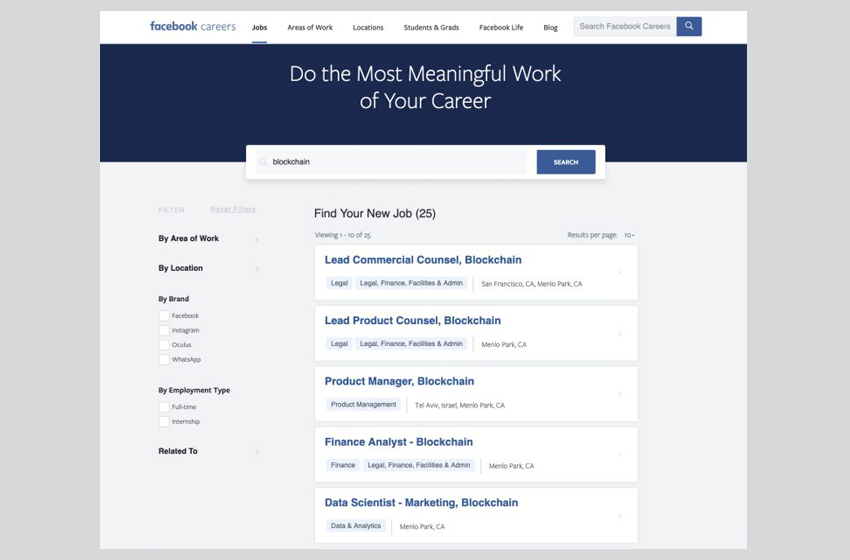 Some news sources call this “mysterious,” but it’s rather vanilla flavored. Of course, a behemoth company wants to dip its toe into the burgeoning field of cryptocurrency. Mark Zuckerberg is open about that.

But there’s a twist.

The VP of Facebook Messenger until last year was David A. Marcus, a brilliant entrepreneur and all-around genius who definitely looks nothing like George Clooney. 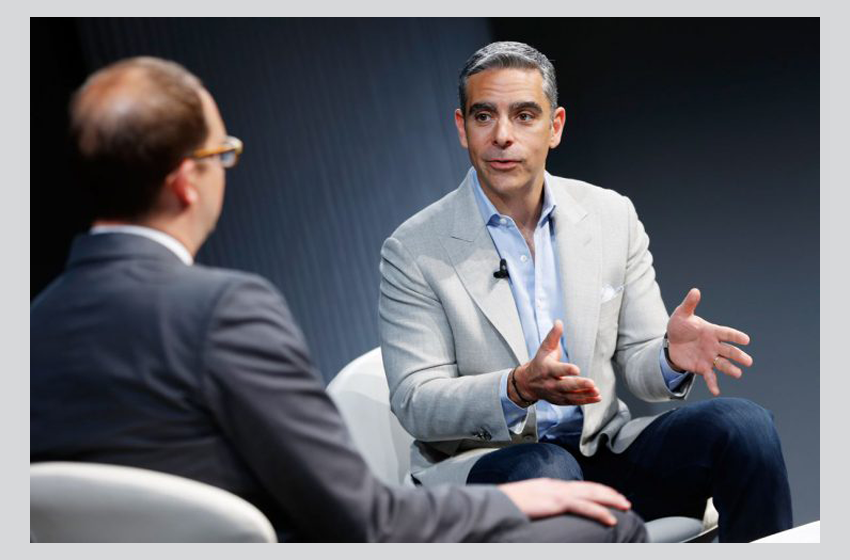 What is Marcus good at, besides everything?

For starters, he was the former president of PayPal. And he once founded a mobile media monetization firm. And he also founded a company that facilitated mobile phone payments. And then he helped Facebook acquire Braintree, which invented Venmo. And then he invented Messenger’s P2P payment platform. And then he was appointed to the board of directors at Coinbase.

All of that definitely sounds cryptocurrency-ish to me.

Cleary, there is plenty of mixing-and-mingling between Messenger technology and blockchain innovation, since the former head of Messenger is now playing with blockchain technology.

Evidently, Facebook has made some progress. Already, they have a stablecoin that is designed to allow Whatsapp transfers in India. This move signals the fact that Facebook has the capability and interest in pushing this technology farther.

Some bloggers have given the stablecoin a name — FacebookCoin. (Hmm. Prosaic.)

A Facebook representative remarked, “Like many other companies, Facebook is exploring ways to leverage the power of blockchain technology. This new small team is exploring many different applications.”

It’s not a far leap from “exploring many different applications” to having a cryptocurrency that is intrinsically tied to the Messenger platform.

The point of this article is more than clickbait. The point is that we need to keep a pulse on the hottest tactic that the marketing community has seen in years.

So, keep these predictions in mind, don’t lose sleep, and keep innovating and marketing with Facebook Messenger chatbots.