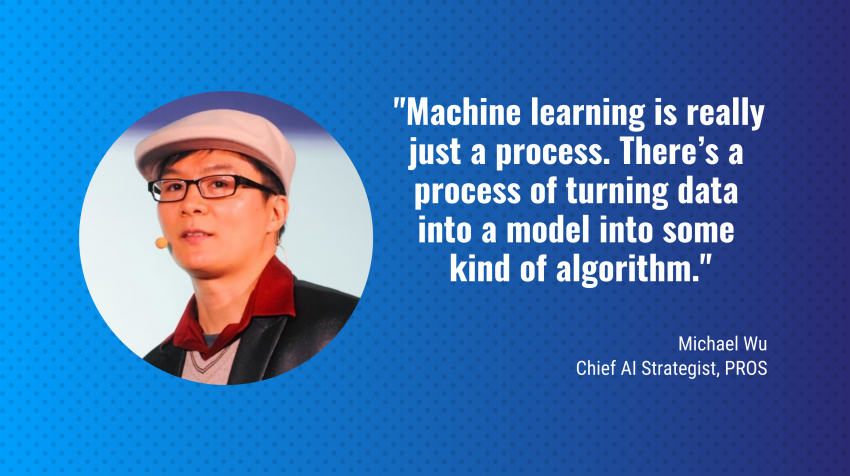 For those of you who’ve been checking out the series lately know I’ve been to a number of industry events over the past several weeks speaking with a number of folks, with most of these conferences taking place in Las Vegas.

Well, brace yourself for this, I was in Vegas again…for another conference…again. But this time around I was there for Outperform, a conference put on by PROS; a provider of AI-powered solutions that optimize selling in the digital economy.

And not only did I have an opportunity to speak to one of the foremost authorities on artificial intelligence in PROS’ Chief AI Strategist Dr. Michael Wu, I got to do so with my friend and CRM Playaz co-host Paul Greenberg.

Since we’re all good buddies, and with Michael’s ability to explain AI/Machine Learning/Deep Learning in terms most humans can understand, we were able to have a bit of fun while learning a lot about what AI is and isn’t. And what it will replace as well as what it won’t.

Below is an edited transcript of our conversation. To see the full conversation watch the video or click on the embedded SoundCloud player below.

So What is AI Anyway?

Paul Greenberg: For the ordinary human being, what is AI? What’s the difference between machine learning? Realistically, what are the actual benefits of it as opposed to all the hype you hear all the time?

Michael Wu: Let me talk a little bit about machine learning first. Because that’s the foundation of it. Actually, everything goes back to big data. So, machine learning is really just a process. There’s a process of turning data into a model into some kind of algorithm, right? So you have some data, the data, I have some pattern in that, right

A Simple Definition of Artificial Intelligence

But what is AI? AI Is, it’s actually much harder to define. I would say that because the definition of AI changes all the time. It has actually been around for quite awhile and it’s been around, I would say, 40 50 years; the concept of it. The building of it is much more recent of course. So over time this concept of AI has actually changed quite a bit. The way I like to look at AI at this moment in time, you know, it’s really just machine mimicry of some human behavior and human decisions.

And when the machine can mimic something humans do then this is considered artificial intelligence. But, that’s actually not sufficient by itself. I would say that there had to be two more criteria. One is automation of decision action and the other one that a lot of people miss this, the ability to learn, and improve itself.

So that’s how I like to define AI. It’s a machine kind of mimicry of human decisions and behavior. With the characteristic of one, being able to automate decisions, the actions and the ability to learn, and improve itself over time.

The Biggest Misunderstanding about AI

Brent Leary: What’s the most irritating thing that people always seem to get mixed up or confused about this area that you hear over and over and it just drives you crazy about this?

How Machine Learning Fits in to AI

The one example that I could give you is, for example, V8 is a kind of engine, right? Everybody knows that V8 is a kind of engine. So if you make that kind of mistake of saying V8 is an engine, inside a car right, and there’s an engine in every car, right? Then if you look at that image sometimes you can come to the wrong conclusion, that the engine is actually a kind of car. Which is ridiculous, right? You know an engine is not a car. So, that’s the one thing that very often drives me crazy, that people say that, ah, machine learning is a kind of AI, and AI is not a kind of machine learning, it’s not quite true.

Why People Should Stop Worrying about Machines Taking Over

Here’s the deal, from my standpoint you said its mimicry, meaning its approximation, and it’s the best it’s ever going to be. It’s never going to be a human being substitute, it can’t be. It doesn’t create the way humans do.

The chief data scientist of Salesforce, Richard Socher, actually made a comment once where he said, and I love this comment, “AI doesn’t want anything” which is really a great way of putting it, which means, you have to tell AI, go do that, and then it will go do that and learn. But it’s not going to say, “I’m going to go do that”. So is it first, is that true? Secondly, am I right to be irritated by that or should I get some AI to be irritated for me?

AI Offers Optimization for Your Business

Michael Wu: Well, I mean I think, it’s true to an extent, I would say machine learning AI algorithms out there, they operate on, what we call optimizing self-objective functions.

So depending on what you wanted to optimize right? Then it will find ways to optimize whatever it is. It’s simply a mathematical algorithm that tries to optimize something.

See Also: These 6 Things Will Improve Your Retail Customer Experience

It’s About Setting the Parameters

But maybe you forgot a few things, and its almost like, think about how a child will learn, how children learn. I mean if you tell them that, to optimize something or to do something, they are going to try every way they can. And then you say, maybe he wants to get an ice cream for his friend, and then he tries, and one time he tries to just grab it by force and it’s like, oh, you can’t do that.

Brent Leary: So yesterday, we had a little, like an analyst meeting I guess, with [PROS CEO] Andres Reiner. And one of the things he said was, modern sales organizations currently focus on deal optimization. He says now they really should transition to optimizing customer experience. So, how do those two things fit together? There’s a lot of focus, right now on using data for optimizing things like deals. But how do you do things around optimizing for experience with all this data that you have that’s really focused on deal optimization?

How to Optimize Customer Experience

Michael Wu: Yeah, I think if you only have data, that actually focused on the deals, it’s actually very hard. You need to collect other data. Obviously, it’s very easy to, envision a scenario, where you optimize a deal but people poor customer experience  — like selling them stuff they don’t want, keep sending them catalogs of things they already have or own.

You could do that but, then ultimately, you are hurting your customer experience in the longer run, it might actually hurt your deal. Eventually customers are going to leave you. This is the time scale that people have to look at. Over a short time scale, if you optimize for deal you may get some short term sales but in the long run, if you actually don’t care about customer experience, the customer’s going to leave.

But if you optimize your customer experience, maybe in the short term, you won’t give you the revenue lift that you wanted. But over a long run, customers going to realize, that hey, this company is awesome. I’m actually going to do business with them and continue doing business with them for like the rest of my life. Or I’m going to encourage, my children, my friends, and advocate about this company’s service.

That’s actually a much longer term view. But as we know most businesses sometimes can be a little bit short sided.

Brent Leary: All right, I know we are getting kind of close to the big key note. I know you have to run. But any last words, where do we see AI or should I start with machine learning then AI? Where do you see us in five years with this stuff?

Michael Wu: I think, in five years a lot more work is going to be automated. I would say the most boring, repetitive part of work. That should be automated. I feel like a lot of people fear that computer or machine are taking our jobs. I think we’ve been doing repetitive jobs for too long. (And) I think that those should have been done by machines.

Humans should focus on what humans do best. For example, building relationships, being empathetic to people, and solving problems. So if you solve the problem once or twice then you can teach the machine and the machine can solve it.

If there are situations with the same problem arising, and the previous ways that you solved didn’t work, then you try to solve it again a different way. Once you solve it, you teach the machine so they can automate. Human can always focus on solving new problems, which is of course much more interesting and much more exciting.