John Lawson of Watching Amazon: Amazon is not the Third Superpower in the Tariff War Between the US and China 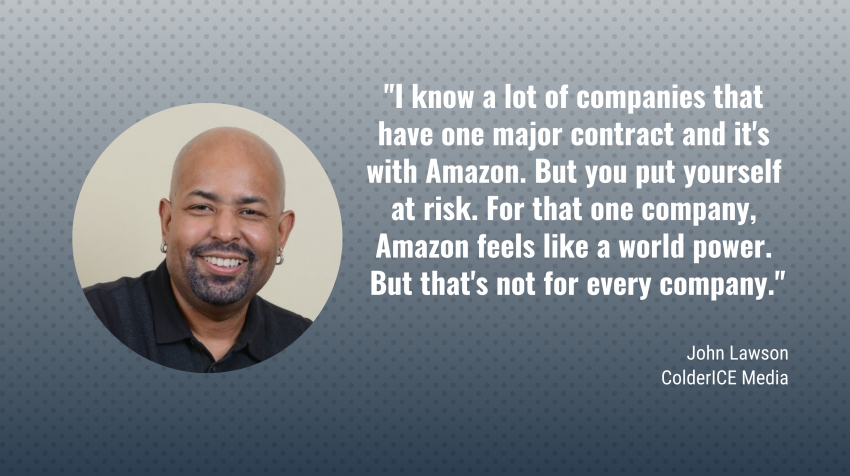 It appears like we may have averted a tariff war with Mexico, even though it’s still a bit early to tell if that will really be the case.  But there’s another tariff war that’s still in effect right now between the two biggest economies in the world – The USA and China. But are these the only two superpowers involved in this fight?  Some say there’s actually a third superpower involved in this – Amazon.

Now is Amazon really a superpower in the same way that these two countries are? Of course not. They can’t use executive orders to remove or increase tariffs the same way USA or China can.  But, can Amazon impact the impact of these tariffs due to online retail omnipotence and the role they play with both third-party sellers and consumers? Well that’s what I put to my buddy and Watching Amazon co-host John Lawson.

Below is an edited transcript of our conversation on whether Amazon is a superpower to be reckoned with in the tariff war between the US and China. Spoiler alert, Lawson “ain’t” really trying to hear it – for a number of reasons. To see the full convo, which includes segments on stats Amazon released from their recent small business report, watch the video or click on the embedded SoundCloud player below.  And let us know what you think!

Amazon and the Trade War

John Lawson: You want to talk about that?

Brent Leary: It’s the US, it’s China, and one of the really interesting articles I saw says it’s not just a two country battle. There’s a third superpower that’s actually being a part of this. You know who that is?

John Lawson:  It’s not affecting me at all.

Brent Leary: But there is an article, and there’s this company, I think it’s Max R, or something like that, Maxsa.

John Lawson: I’m trying to see where you’re going with this, because I’m not feeling this. Amazon a superpower… my foot.

Brent Leary: Well, keep your foot over there, I’ve seen it. All right, so this company Maxsa, is a seller of electronic gadgets. A lot of those gadgets are made in China. They sell them not on Amazon’s platform, they actually sell them to Amazon …

Brent Leary: … and then, Amazon sells them on their platform.

Brent Leary: Well, you can have your retort after I let the people get the feel for what’s going on.

See Also: Amazon SEO Tips: How to Rank as Highly in Amazon Search

Brent Leary: Okay, so because the tariff hit is 25%, I believe, for this company, this company who doesn’t sell on Amazon, but sells to Amazon, so they have to have an agreement with Amazon; Well, they were looking for a price increase of about 25%. Amazon is like, no, we can’t do that, because Amazon sells those to individual consumers, and Amazon is looking out for the price.

Brent Leary: So, this company has reached out to Amazon and said, hey look, because of the tariffs can we increase the price that we sell these things to you? They didn’t even hear anything back on it, because they’ve got …

Brent Leary: Amazon has a standing order of like hundreds a week, so they cut that standing order. The company that sells to Amazon cut the standing order, they said they didn’t even hear anything from Amazon. So, then they started reaching out, they said, hey, can we renegotiate? They didn’t hear anything from them again, so they hired a marketing company. The marketing company actually got a response from Amazon saying, yeah, we can go up 3%. The company was like, look, that’s just not enough, we’re getting hit with 25%. Can you do anything more? I think the end result is they got it to 5.5%.

John Lawson:  Good for them.

Brent Leary: And it’s not just them, they’re kind of representative of companies that are doing business with China, doing business in the States, and using Amazon as, basically, one of their biggest customers. Amazon is like, look, you can’t be passing off that big 25% thing to us, because we’re definitely not going to pass it on to our customers, and you say to that guy what?

John Lawson:  I’m hearing the violins. I mean, you know, you put yourself in a position where you have one client, all right? Amazon is their one client.

John Lawson:  No, it’s there one client because they’re crying like this. I’m serious. I mean, I know a lot of companies that do have one major contract, or one … But, you put yourself at risk.  So, for that one company Amazon feels like a third world power for them, or a third big power. But not for every company. That’s only for some.

Brent Leary: But, these guys did make an interesting point.

Brent Leary: He says, because Amazon pretty much sets the stage for pricing that, if Amazon says you get this much then everybody else like Walmart, all the other big companies that they sell to, they’re going to say, well, if Amazon is paying this, I’m going to pay this. So that really makes Amazon into a third superpower in this thing.

John Lawson:  That’s the game you’re playing, I don’t get it.

John Lawson: I’m not saying I don’t care, but what do you want me to do for you, right? What do you want us to take up picket signs and say, Amazon pay your vendors more? I mean, no. You need to learn how to sell direct to consumers. Call me, I’ll help you with that.

Brent Leary: You know what a help that would be?

John Lawson: Look, here’s the thing. Right now, you’re a middleman, and middlemen get squeezed when prices go up, right? And they’re really not offering a whole lot of value other than they order it, put their name on it and sell it on the other side, so that guy is getting squeezed out anyway. I mean, ultimately, Amazon wants to squeeze out all the middlemen. Walmart wants to squeeze out all the middlemen. So you got to play this game the way it’s meant to be played, and what’s going to ultimately happen is that tariffs hit everybody. So there’s nobody that’s going to be making the same product that you’re making, like they called it … What did they say they’re making?

John Lawson:  Yeah, electronic gadgets. That means anybody else can order that same stupid cord, you know, with lights in it and put their name on it. So their model is part of the reason why they’re in that mode, and I don’t even really know this company, I could be completely wrong, but just the way that this article lays out what you’re product base is, that’s what I think is the real problem.

Brent Leary: You have no compassion for the little guy.

John Lawson:  I am the little guy, but I sell directly to consumers. My stuff is going up 25%, but when I have to deal with it … And another thing is too, that’s just the cost of the goods sold, that’s going up 25%. If people understand what the whole supply chain is, then it’s pretty bad, but if you have enough margin built in you should be able to take that five and a half, 10%, really around 10%, because they already ate 10% of it before. So it’s really only going up 15%, right?

Brent Leary: … certain components that they use or if it’s completely manufactured in China, so the whole thing is taxed at, or tariffed at 25%, I don’t know. It’s just right now-

John Lawson: Let me ask you a question.

Brent Leary: This guy is saying Walmart will go with what Amazon sets as the price.

John Lawson: That’s what he says.

Brent Leary: Well, there’s other people that said that too in that article.

Brent Leary: Is it any surprise that Amazon has that much clout?

John Lawson: How about Amazon’s, at some point is going to have to deal with this price increase, because they’re not going to be able to just walk to another one that’s paying any less. I mean, they’re all … Look, the tide is rising for all boats, so if Amazon thinks they’re going to get away with one quarter or two quarter of lower price, at some point the price has to catch up even with Amazon. The tariffs are going to affect everybody, it’ll work itself out. Don’t freak out.

Brent Leary: I feel for the small business guy …

John Lawson: I feel for every small business guy.

Brent Leary: … but I also, I appreciate Amazon in this regard, because they’re at least keeping the prices down for the end consumers …

John Lawson: By screwing the manufacturers.

Brent Leary: No, China is actually doing it …

John Lawson: No actually the tariffs are doing that.

Brent Leary: Actually, I guess we’ve got to say this was started… on our end.

John Lawson: Yeah, this was on our end, this is our war.

Brent Leary: So it gets back to the president who’s actually …

John Lawson: Yeah, I mean this policy of hardball politics is kind of going the way everybody said it would at the beginning.

John Lawson: And at the same time, take a trip to India or South Korea …

Brent Leary: Find a country that’s not on the tariff list …

John Lawson: Let me just say this, I did read a story, and I can’t remember the company. It was a pretty big company, a retail house, and they made arrangements early last year for the 10% tariff increase, thinking that this might happen, and they moved a lot of their manufacturing to India …

John Lawson: … in preparation, and they were just talking about how well they’re doing because they did make that move.

John Lawson: And the deal was even if this didn’t play out, their business would still be in a better position, just because they moved to a different manufacturing other than China. So I think that’s something you guys have got to start at least on the horizon, start thinking about.

Brent Leary: So you want the Maxsa guy to call you, you said?

John Lawson: Yeah, yeah, give me a holler man, I can help you out.