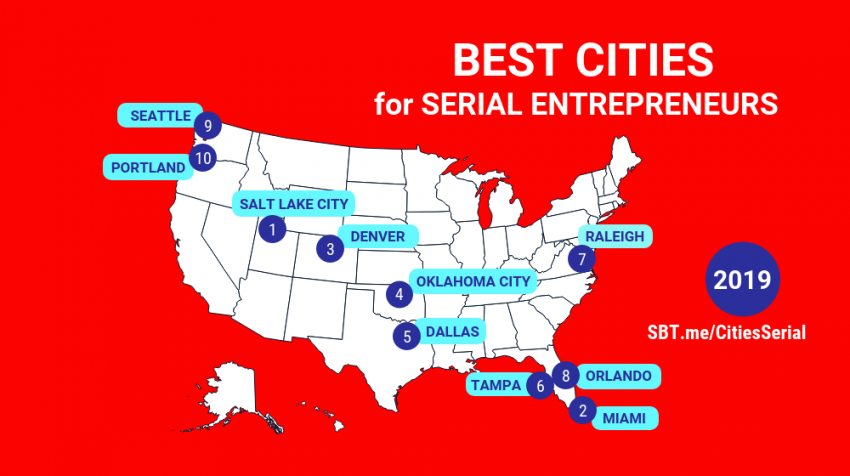 Our rankings of the Best Cities for Serial Entrepreneurs highlight where you can find large concentrations of serial entrepreneurs.

Serial entrepreneurs for our purposes are defined as those who have started three or more businesses prior to the one they run today. Below you’ll see a list of metropolitan areas where large numbers of these serial entrepreneurs live and work.

Why do certain cities foster more serial entrepreneurs than others? There could be several reasons. Some cities in our rankings offer substantial support resources for entrepreneurs. In others, the history and culture is steeped in entrepreneurialism and calculated risk taking. Still others offer a community of like-minded business owners able to provide networking opportunities and mentorship.

Our rankings are based on our proprietary analysis of U.S. Census data. The rankings reflect the percentage of serial entrepreneurs to the overall population in metropolitan areas of the United States with over 50,000 people. We also reviewed factors such as industry clusters, lifestyle, infrastructure, costs and workforce availability.

Read on for the Best Cities for Serial Entrepreneurs, 2019 edition.

Robert Brady, Founder of Righteous Marketing says, “The business community in Salt Lake City is phenomenal. The entrepreneurial spirit is strong and founders are generous with their time to support the community.”

Like some other U.S. cities, Miami owes its very existence to entrepreneurs. Fruit grower and businesswoman Julia Tuttle talked railroad mogul Henry Flagler into building a rail line to the region due to the area’s importance to the citrus industry. Tuttle believed the area could become great. Her vision turned out to be correct. The city was officially incorporated in 1896.

The city of Denver has long been a place where hopeful entrepreneurs have come seeking their fortunes. The first settlement on the site of what is now Denver was a mining camp established by speculators at the beginning of the Pike’s Peak Gold Rush in 1858.

Beyond the Fortune 500 companies that make their home here, there are also quite a few small business success stories. For example, in 1964, Tom and Judy Love leased an abandoned service station in the area with just $5,000. Fast forward to today. Love’s Travel Stops and Country Stores is a family owned chain of more than 470 truck stops and convenience stores in 41 states.

Sarah Hudson, owner of The Marketing Analysts, says, “The Dallas-Fort Worth-Arlington regional area is the fourth largest in the nation, ranking just below New York, Chicago and Los Angeles. Whether it’s homes, highways, hotels, schools, hospitals, office buildings or retail spaces, growth and construction is non-stop in every direction.  While much of the growth has taken place in the North Dallas suburbs of Plano, Frisco and McKinney, you can see it throughout the metroplex. From new mixed-use communities in Irving’s Las Colinas, including new convention and meeting facilities, and a soon-to-open 350-room Westin hotel, to Facebook’s 150-acre high-tech data center in Fort Worth, which could produce a new regional tech hub for small businesses, opportunity is brimming for entrepreneurs.”

Home of the largest port in Florida, the city and its surrounding metro area has 5,137 serial entrepreneurs. They make up .17% of the population.

The Port of Tampa now ranks 7th in the nation handling nearly half of all the freight passing through the state. So there are tremendous opportunities for businesses that depend on the shipping industry, such as retail and e-commerce, and other industries related to shipping, such as warehousing and transportation. Fun fact: Wikipedia also maintains its servers in the city.

“We are headquartered a few hours south of Tampa, and the city is in the news a lot. Tampa is a fast growing area. Along with business opportunities you get a great lifestyle. Located on the beautiful Gulf Coast, residents enjoy 244 days of sunshine. It’s hard to beat that,” says Anita Campbell, founder of Small Business Trends Media.

Known as the City of Oaks, the metro area also supports 2,090 serial entrepreneurs. That’s .16% of the total population.

Barbara Weltman, President of Big Ideas for Small Business, Inc. points to the business-friendly environment as one reason serial entrepreneurs thrive.  She says, “Orlando is the center of Florida. The state government here is supportive of small business. There’s no personal income tax on owners and various other business taxes (e.g., rent taxes) have been going down in recent years.”

The home of Starbucks and coffee culture is also a center for serial entrepreneurs. Seattle has 5,850 serial entrepreneurs operating there, constituting .15% of the population. Perhaps all the coffee houses with their welcoming environments for startups make it easier to swallow taking risks.

The city’s most famous landmark was an adventurous enterprise in its own right. Constructed for the 1962 World’s Fair, the Space Needle is 605 feet tall, making it the tallest structure west of the Mississippi. It is built to withstand winds up to 200 miles per hour and earthquakes up to a magnitude of 9.0.

Like the serial entrepreneurs who make the city home, Portland has been the recipient of much good fortune. Even its name was the result of a bit of luck. Settled in the 1840s, the city was originally called “Stumptown” or “The Clearing” — because of all the trees cut down to build it. Two founders finally agreed on a new name for the city simply by flipping a coin. Good choice.

As a serial entrepreneur, there’s no reason you must build your businesses in one of the cities listed above. It’s always wise to start a business where you are today or near your target  customers. But if you haven’t yet started your business or are looking for a new locale, one of the 10 cities in our rankings may be a good destination to explore.

This Best Cities for Serial Entrepreneurs ranking is based primarily on our proprietary analysis of the U.S. Census Bureau’s Annual Survey of Entrepreneurs (ASE) and Annual Estimates of the Resident Population for Incorporated Places of 50,000 or More.

Check out our infographic below for a shareable summary of the best cities for serial entrepreneurs.

Shawn Hessinger is the Executive Editor for Small Business Trends. A professional journalist with more than a decade of experience in the traditional newspaper business, he has another 10 years of experience in digital media for trade publications and news sites. Shawn has served as a beat reporter, columnist, editorial writer, bureau chief and eventually managing editor with responsibility for nine weekly newspapers, the Berks Mont Newspapers. He is also a member of the Society of Professional Journalists.
2 Reactions
Subscribe
Follow @smallbiztrends
RSS LinkedIn Pinterest iTunes