Master the Art of Business Small Talk with These 11 Tips 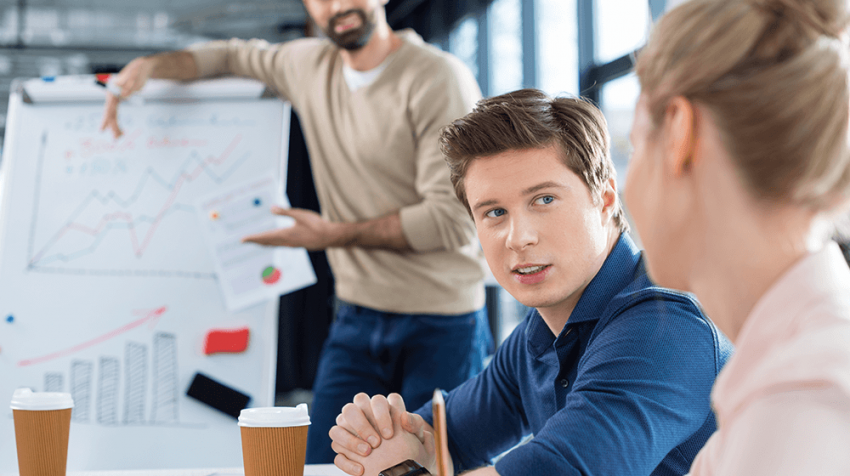 Whether it’s at a business dinner, a launch event or a sales meeting, being good at small talk comes with a number of advantages, including giving you the chance to meet new people and sell your products or services.

At the same time, small talk overload can be off-putting and do you more harm than good.

If you’re wanting to improve your small talking abilities to help you become more successful in sales and in business as a whole, take a look at the following small talk tips and advice and how to avoid making small talk when it’s not appropriate.

Decide Who You Want to Talk To

If you’re going to a networking event, a business dinner or any type of gathering that involves talking to others, deciding who you want to channel your small talking efforts into before you go, could be a good idea.

This way, you can do a bit of background research on such individuals prior to the event so you are more in-tune about their background to make the small talk easier.

Rather than simply talking about yourself and your own business, interests and more, when engaged in conversion with a stranger, ask them questions so you can build up a greater picture of what they are like.

Asking people questions will also make them feel you have a genuine interest in them and create a more engaging conversation.

Another top small talk tip is to be a good listener. Listen intently to the responses to the questions you ask them. People are naturally more at ease and willing to talk to others who listen to them and show a genuine interest in what they are saying.

This will help steer the small talk into more authentic territory which you and the person or people you are talking to can benefit from.

Pay Compliments Where They Are Due

Rather than ‘sucking up’ to the CEO of a major organization you want to become a supplier for, be subtle and genuine by paying compliments where compliments are due.

If there’s something you feel you want to genuinely compliment an individual for, do so, as sharing praise where is praise is due is likely to be well received.

Another good small talk tip and way to get multiple people involved in making small talk is to be an introducer.

If you’re at a business event and see someone standing awkwardly alone, invite them over and introduce yourself and the person you are talking to.

Small talk has its place but isn’t for every event or occasion. For example, if you’re a door-to-poor salesperson, knocking on someone’s front door and engaging in small talk isn’t likely to go down well as the prospective customer is likely to become annoyed that you are wasting their time and ‘softening’ them up to sell them something.

In this instance, getting straight to the point of what you are selling would be more appropriate.

Just because someone is a stranger, you don’t necessarily need to treat them like a stranger. Granted, treating someone you’ve only just met like you’ve known them for years would be inappropriate and unprofessional.

Instead, act friendly, open and welcoming and avoid meaningless small talk like what the weather is like. Talk about more meaningful subjects to avoid empty interactions.

Meaningless small talk can be avoided by revealing something slightly personal about yourself when talking to someone you want to for business purposes.

Exposing your whole life story and your personal ups and downs would be over the top. However, discussing something about yourself and what you learned from it can create a more meaningful conversation that opens you up as an honest, personable individual.

Another trick to avoid small talk when it’s not appropriate, is to ask for stories rather than answers. For example, rather than asking someone how their weekend was, ask what their favorite part about the weekend was and why. This way, you are inviting the person to tell you a story rather than a short, couple of words response.