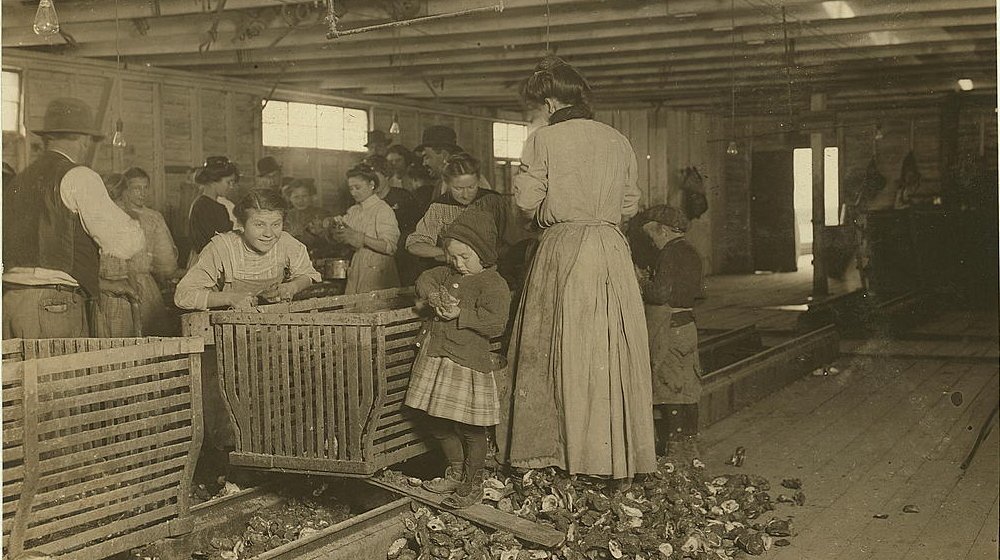 Children as young as four years old worked in appalling conditions in the early 20th century.  We’ve collected vintage photographs of 17 child labor jobs from that era in the United States.

The pictures are the work of investigative photographer Lewis Hine. He documented working conditions on behalf of the National Child Labor Committee between 1908 and 1924. Hine had to adopt disguises such as Bible salesman and postcard vendor to gain entry to workplaces.

Hine’s photographs and captions show that child labor jobs were deeply ingrained in society in that era. Adults failed the children all around: 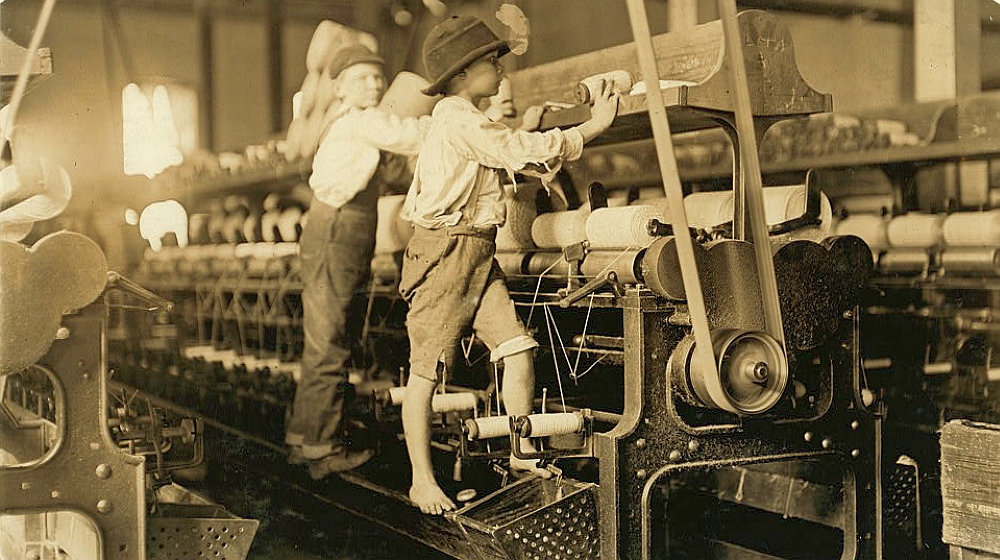 Barefoot children in mills and factories were a common sight. One job was that of doffer in cotton mills, where someone had to exchange the filled bobbins containing spun thread with empty bobbins multiple times per day.

This is from the Bibb Mill in Macon, Georgia, 1909.  The caption of this photo says, “Some boys were so small they had to climb up on the spinning frame to mend the broken threads and put back the empty bobbins.”  Average earnings = 40 to 75 cents per day. 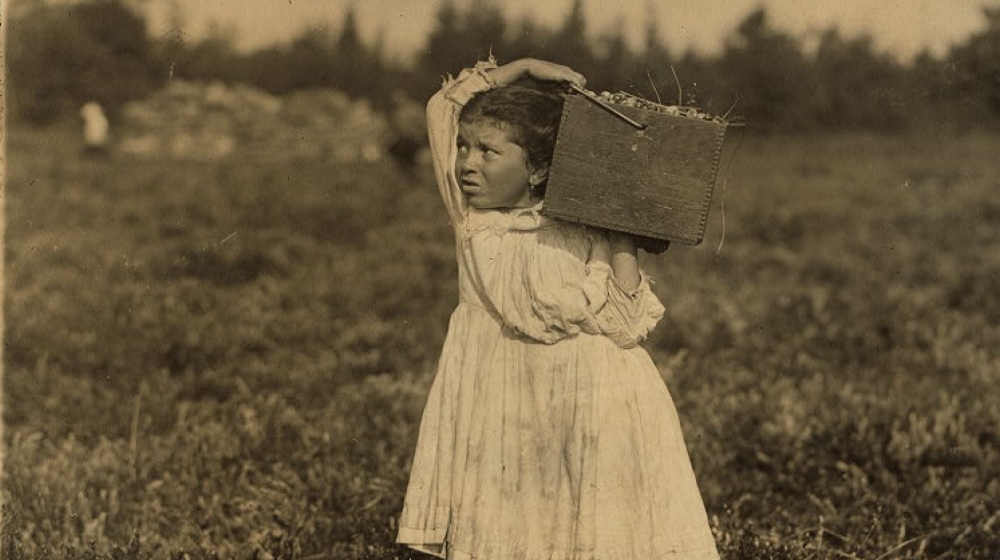 Jennie Camillo, 8 years old, lived near Philadelphia.  But in the summer of 1910 she and her family picked cranberries in Turkeytown, N.J.  She is carrying a heavy box of cranberries to the bushelman. Some urban families treated migrant farm work as a vacation of sorts. But Jennie doesn’t look like she’s having fun.

The photographer measured a peck box like the girl is carrying and discovered it contained 10 quarts instead of the eight dry quarts that workers were paid for. So in addition to the back-breaking labor, workers were cheated. Average child earnings = 6 to 8 cents per box. 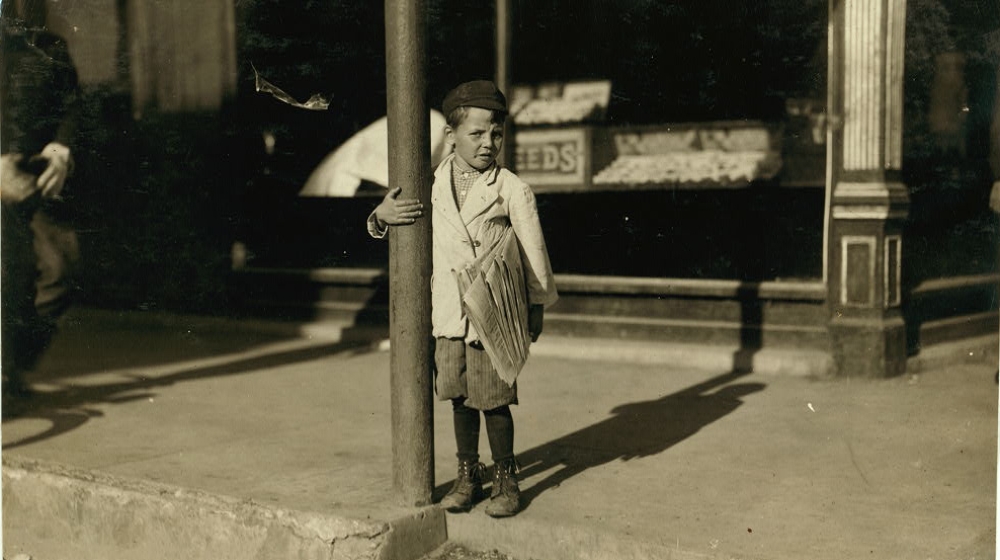 Tony, six years old, gets up at 5 am everyday to sell papers in this photograph taken in Beaumont, Texas, 1913. According to the caption, “He is a regular beggar. ‘P-l-e-a-s-e buy me papers.'”

Newsies, as they were called, went to the newspaper or distributor offices, picked up papers and sold them on the street. Newsies might work until 10 pm at night. Few went to school. Hines noted that one didn’t know enough math to make change.  Average child earnings = 50 cents a week. 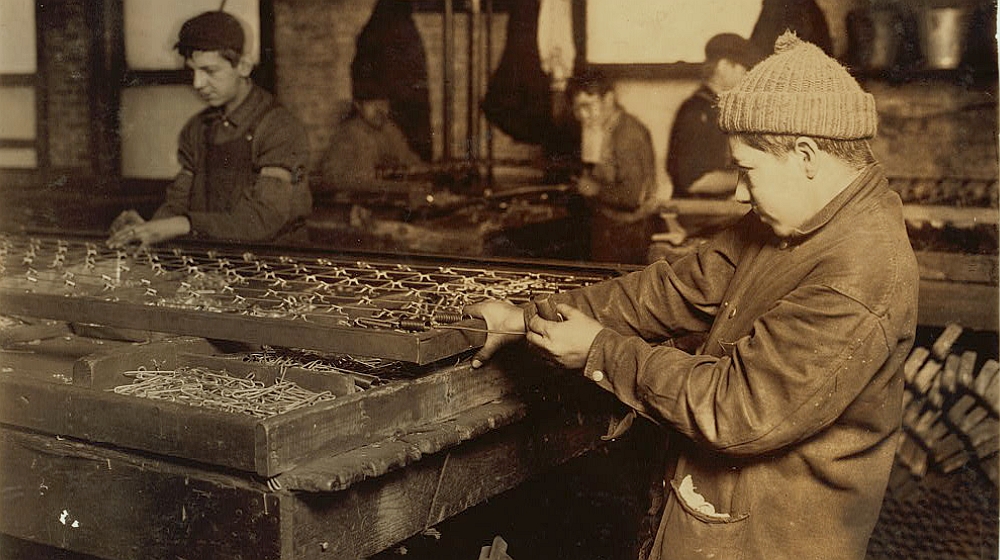 The two boys pictured here are 14 and 15 years old.  They are working in a furniture factory. Their job is to link together the springs for a mattress.

This photograph was taken in January 1917 in Boston, Massachusetts.  The caption does not tell us the boys’ names. 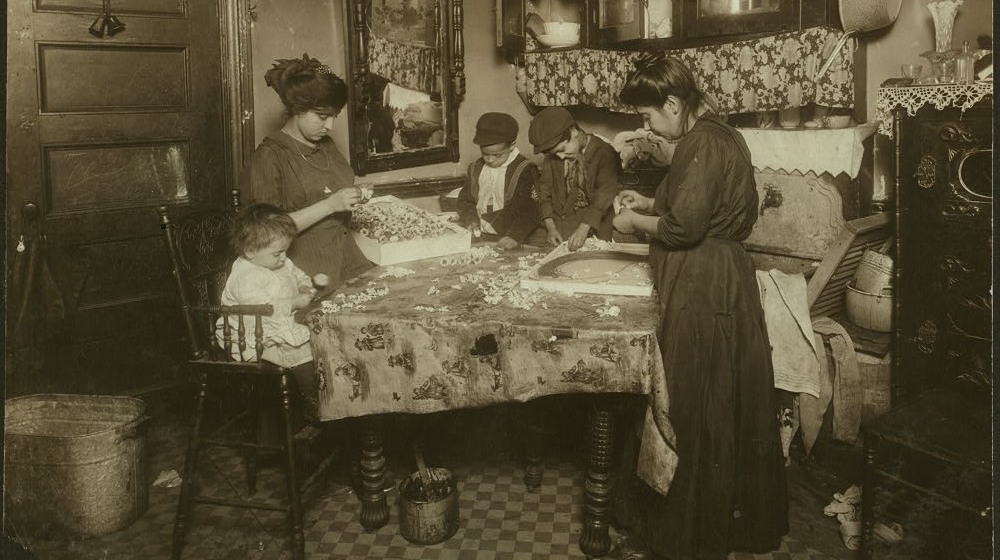 The family of Mrs. Mette makes flowers in a dirty tenement apartment in New York, 1911. They assembled artificial flowers by hand from petals, stems and other materials.

The caption says, “Josephine, 13 yrs. old, helps out side school hours until 9 P.M. sometimes. … Nicholas, 6 yrs. old and Johnnie, 8 yrs. Old work some. So does Rosie, 11 yrs. old (not in photo) who has been sick a good deal. Baby (20 months old) plays with the flowers, and they expect he can help a little before long.”  Average earnings = 40 to 50 cents a week, together. 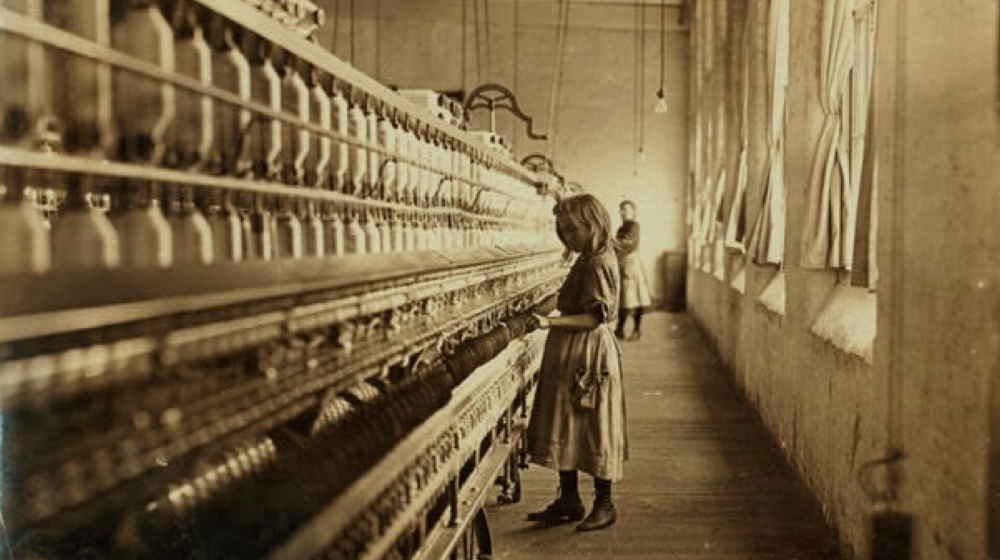 In this iconic photograph, Sadie Pfeifer is a child and just 48 inches tall. Today, she’d barely be tall enough for certain Disney attractions! Yet she is working on a huge spinning machine in a cotton mill in Lancaster, South Carolina, in 1908.

Hines captured dozens of other child laborers in cotton mills. He noted several instances of children getting fingers crushed in machines. Parents and children alike lied about ages. They  needed the money for family survival. Average child earnings = 50 cents a day. 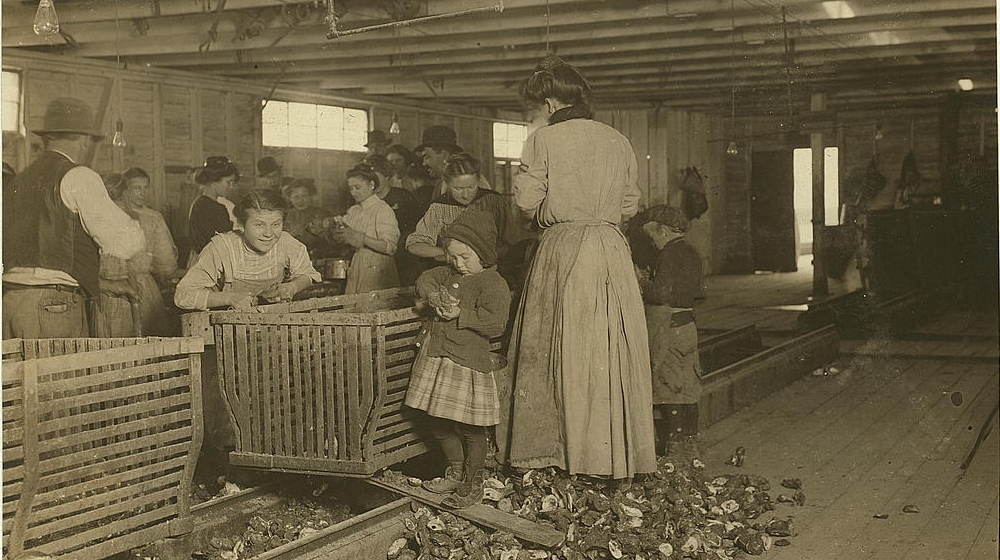 This photograph shows 4-year-old Mary, who shucks two pots of oysters a day in Dunbar, Louisiana in 1911. Agents would recruit workers for the oyster season from out of state. Entire families would travel. All those transported, including children, had to work.

According to the caption, “The boss said that next year Mary will work steady as the rest of them. The mother is the fastest shucker in the place. Earns $1.50 a day. Works part of the time with her sick baby in her arms. Father works on the dock.” Average child earnings = 30 to 40 cents a day. 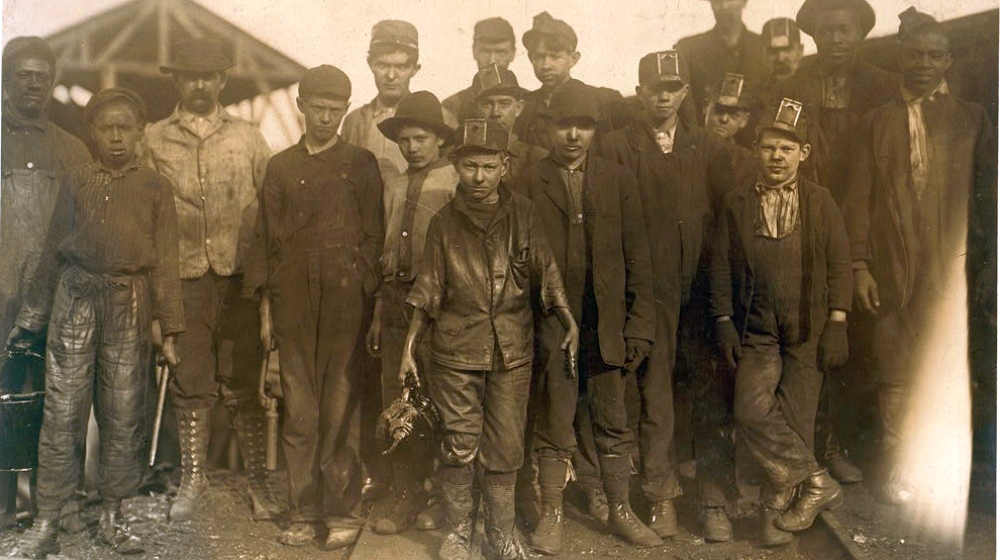 A greaser was a boy who carried buckets of grease for coal cars in a mine. The boy in the center of this photograph is Shorpy Higginbotham at the Bessie Mine in Alabama, in 1910.

The caption notes, “Said he was 14 years old, but it is doubtful. Carries two heavy pails of grease, and is often in danger of being run over by the coal cars.” Average child earnings in the mines = up to $1 a day. 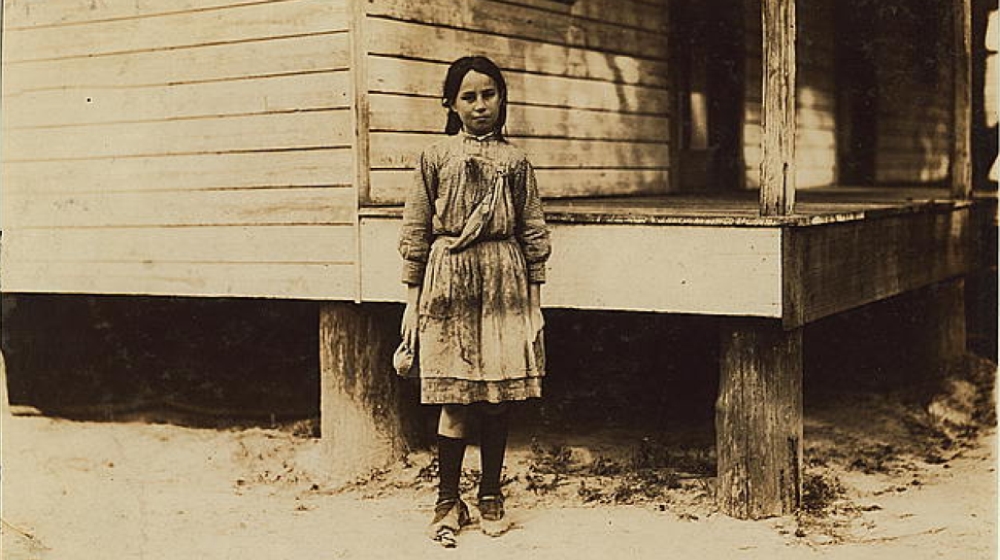 Lillian Dambrinio, 11 years old, wears a filthy dress and apron, 1911. She is a shrimp picker for the Peerless Oyster Co. in St. Louis.

According to the caption, “Says picking makes her hands sore. (Note the condition of her shoes. One worker told me, ‘The acid in the shrimp eats the shoes off your feet.’)  Goes to school, but not when factory is busy.”  Average child earnings = $1 a day when the shrimp are big. 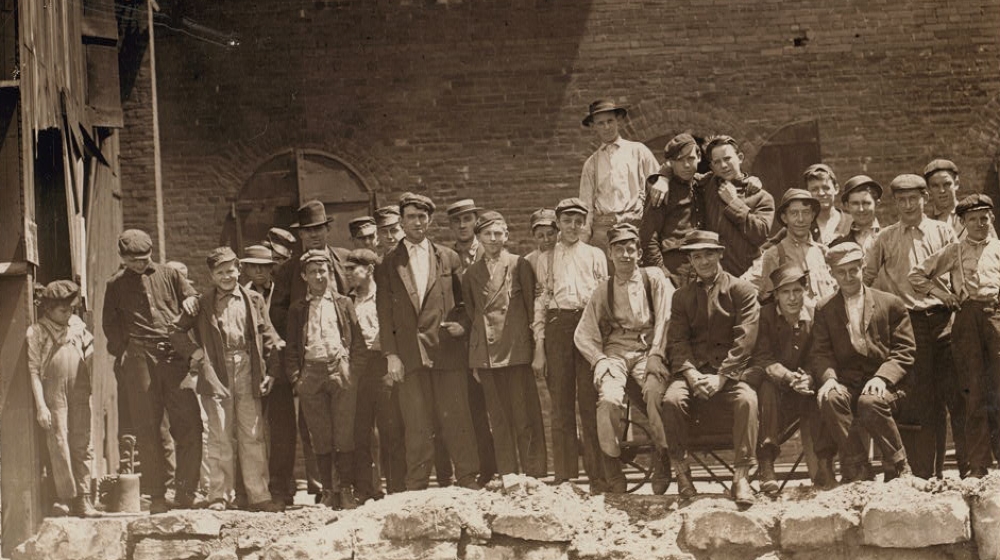 Children were routinely employed in glass making factories along with teenagers and adults.

The caption notes, “Even the tiny chap on left end of photo was working. He is a Polish boy who cannot understand English. I saw him at work just before 1 P.M.” Taken in 1910 at the Illinois Glass Co.  Average child earnings in glass factories = 70 cents to $1 per day. 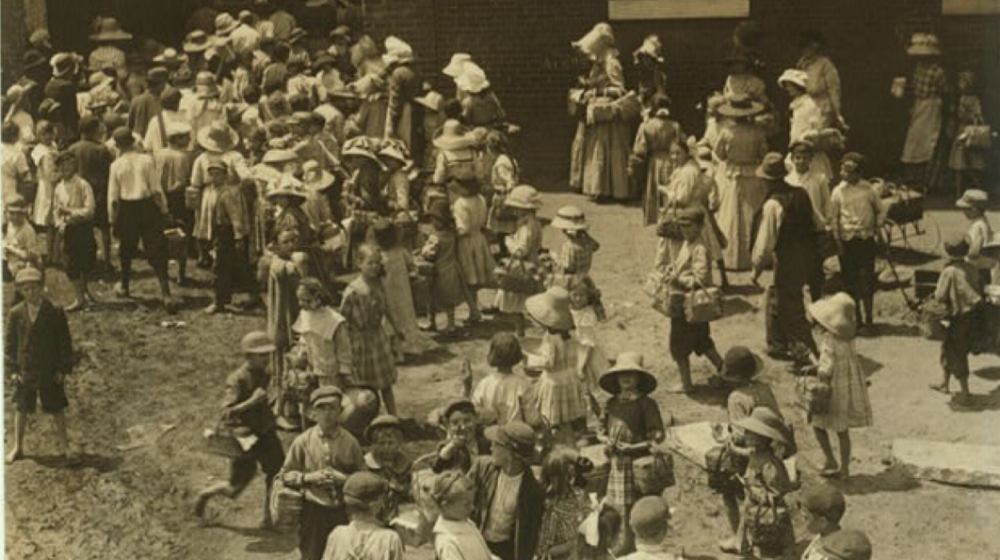 Small children, some paid by the week, deliver meals at lunch time to a mill in Columbus, Georgia in April 1913. Note that a number of “little dinner toters” carry multiple baskets. A few enterprising boys have wagons to haul meals.

Employers, parents and officials evaded weak labor laws by allowing small children to help older relatives. The caption says, “They go around in the mill, often help tend to machines, which often run at noon, and so learn the work.” 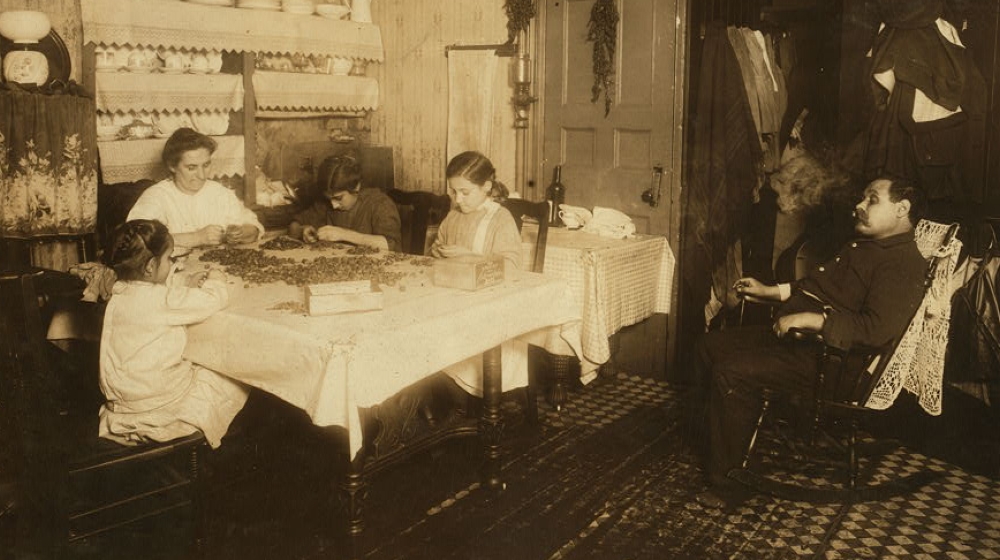 Nut pickers is another family business. Work was performed at home and everyone (almost) pitched in to pick out nuts from shells.

This shows the family of Dometrio Capilluto in New York. The caption says all too well what Hine thinks of unemployed fathers. “A common scene in the tenements. Father sits around. Helen, 5 years old, and Adeline, 10 years old, help pick nuts. Tessie, a neighbor, helps too. Adeline works until 9 p.m. at times.” Average earnings = $4 a week all together. 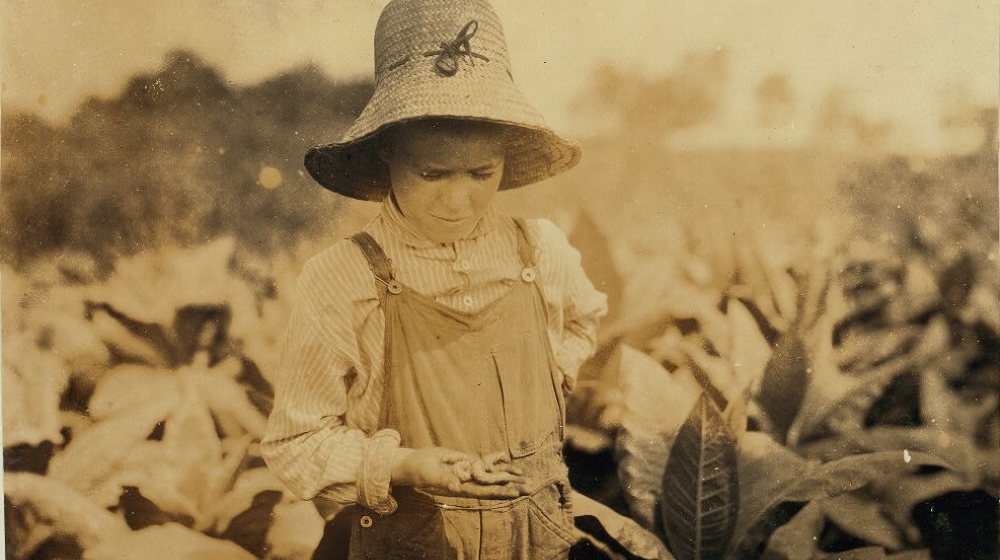 Children picked off worms from tobacco plants. Ora Fugate, a 10-year old boy, looks at fat worms he just plucked off of tobacco leaves in the midst of a field.

Ora did not work for pay, but instead worked on the family sharecropping farm. Family farm work was common at the time. It still takes place today, but not as back-breaking. Photographed in 1916 at Hedges Station, Kentucky. 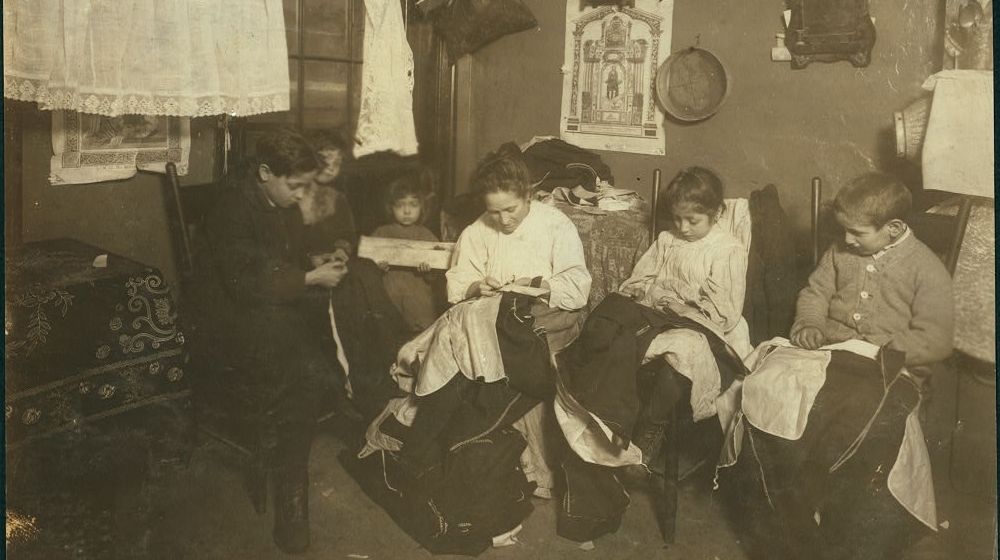 Garment finishing was another family business. Someone would walk to the garment factory and pick up stacks of garments. The family would “finish” them by doing buttonholes and other sewing.  Then someone carried the garments back to the factory. 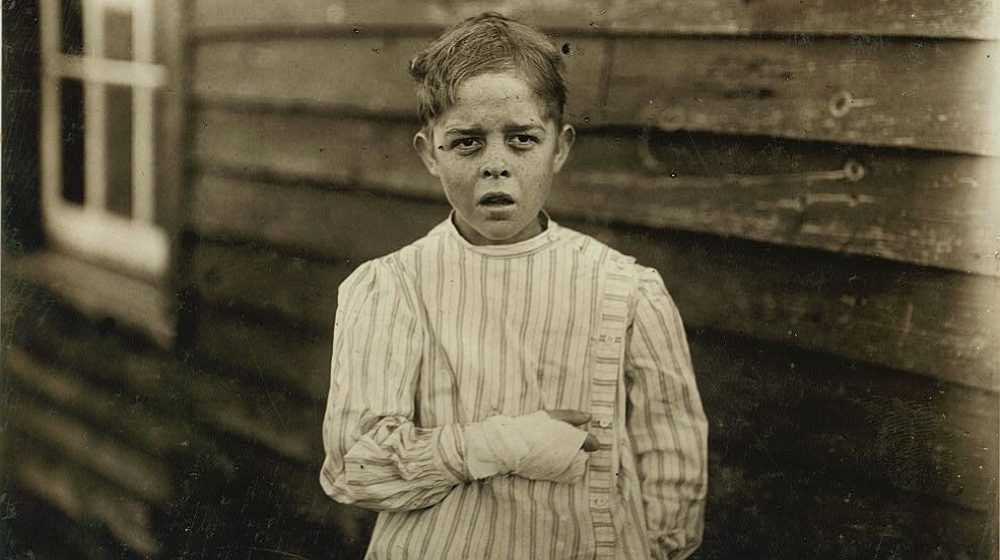 That was horrible enough. But his adult relatives’ behavior was despicable. An attorney was brought in. The caption notes that the boy’s father “tried to compromise with the Company when he found the boy would receive the money and not the parents. The mother tried to blame the boys for getting jobs on their own hook, but she let them work several months. The aunt said ‘Now he’s jes got to where he could be of some help to his ma an’ then this happens and he can’t never work no more like he oughter.'” 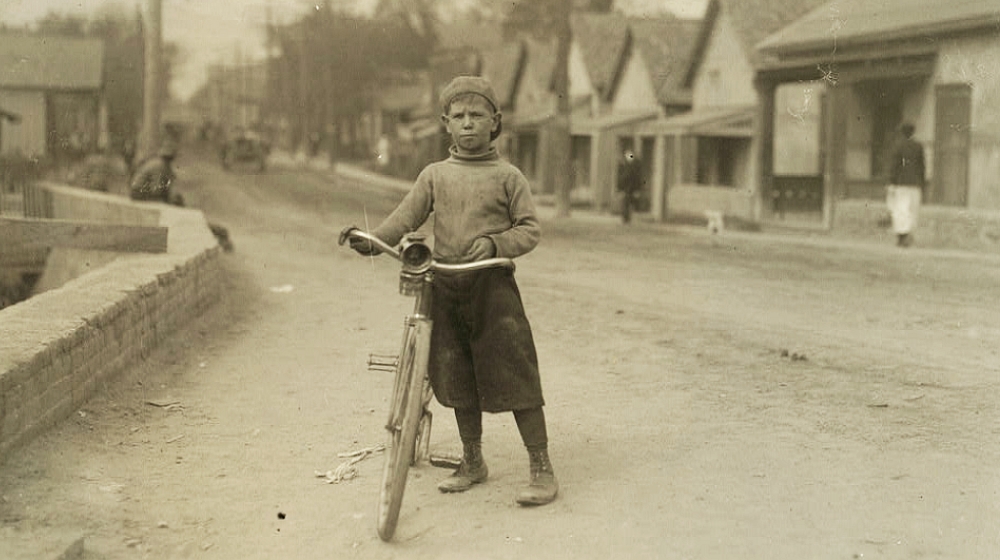 A common job for boys and teenagers was that of bicycle messenger. What’s less common is those with an entrepreneurial streak, like Issac Boyett.  “I’m de whole show,” he told Hines in 1913.

Just 12 years old, the caption says he is the proprietor, manager and messenger of Club Messenger Service in Waco, Texas. He runs messages in the Red Light District, shown here, and knows the houses and women well.  Average earnings = $6 to $10 per week. 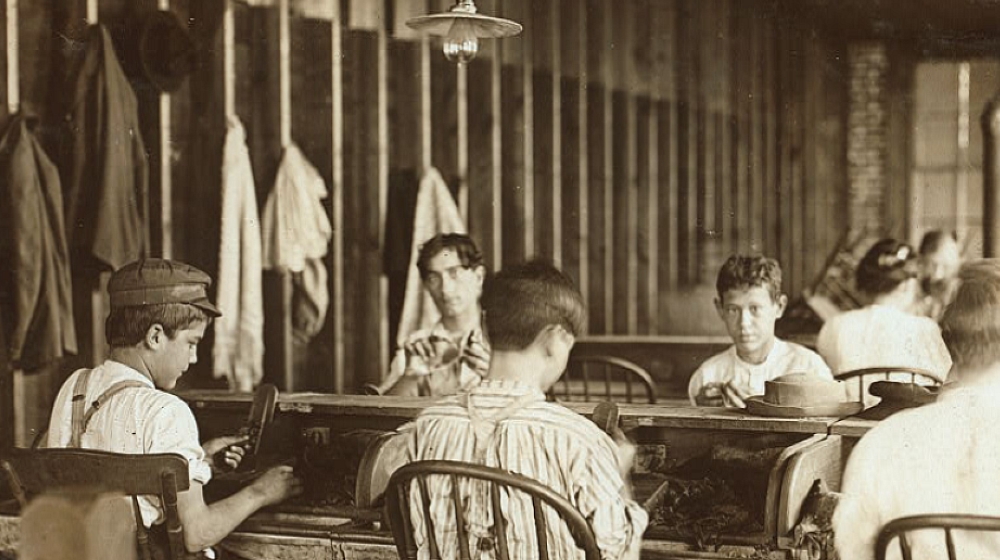 This photo shows children side by side with adults making cigars by hand, 1909. The caption refers to the “factory of Filogamo & Alvarez, Tampa, Fla. Work was slack.”

Some children paid the boss between $18 and $25 to be allowed to apprentice without pay, so they could learn the trade. The cigar making industry was one of the earliest to be unionized. Interesting fact: Samuel Gompers, the president of the AFL (as in the AFL-CIO) started as a cigar maker.

Child labor jobs stole the childhoods and futures of generations of American children up through the early 20th century. Blacks, whites, brown-skinned people, immigrants, Americans here for generations, urban dwellers and rural agricultural workers — all at the lowest economic levels were at risk.

Children worked at hard, dirty and dangerous jobs, and didn’t get schooling. They earned a pittance. At a time when a Coca Cola cost 5 cents, it sometimes took hours of labor to earn an equivalent amount. And few of these children may ever have tasted such a treat.

The middle class and the wealthy averted their eyes.

Major change came in 1938 under President Franklin D. Roosevelt with the Fair Labor Standards Act (FLSA). Among other things, it outlawed egregious child labor practices.  Representative Mary Norton shepherded it through Congress, saying, “I’m prouder of getting that bill through the House than anything else I’ve done in my life.”

Fast forward to today. The FLSA is still the primary U.S. child labor law. It ensures that young people work only at jobs that are safe and only when they are old enough.  Hours are limited and cannot interfere with their education. See the Department of Labor fact sheets for details.