Chris Poelma of NCR: Facebook Libra Likely to be Used More for Commerce and Transactions; Less Speculative than Bitcoin 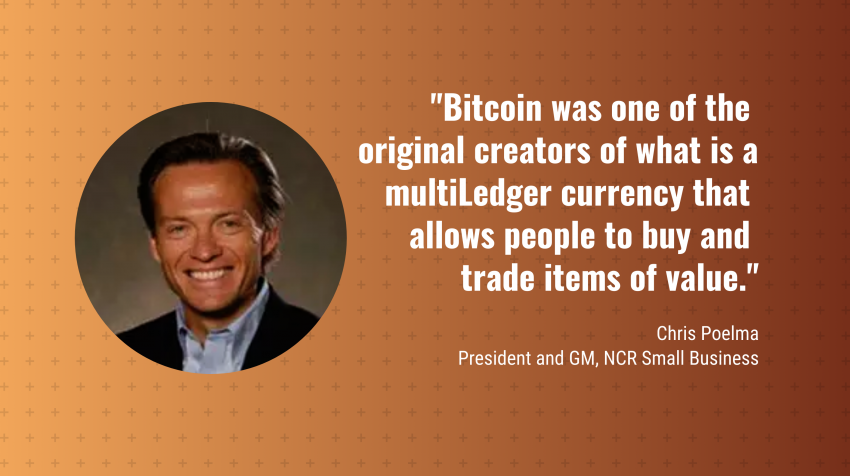 Last month, Facebook announcement Libra, its new cryptocurrency. Libra lets you buy things or send money to people with nearly zero fees. And the announcement caused a lot of different reactions from across the business and political landscape.

It also shined an even brighter light on cryptocurrencies in general.  And you have to believe the interest and speculation will only increase as Libra gets closer to rolling out next year.  But despite all the talk going on, what if anything does this mean for business in general? And how about small businesses in particular?

Chris Poelma serves as President and General Manager of NCR’s Small Business unit. He and I sat down this week to discuss the current crypto landscape. Where does Bitcoin fit in? And what potential impact could Facebook’s Libra have on the market? But more importantly, Poelma shares his thoughts on what all of this could mean for actually transacting business. And not just using crypto for speculative purposes.

See below an edited transcript of our conversation.  Or check out the full interview by watching the video. Or click on the embedded SoundCloud player below.

Small Business Trends: Let’s talk a little bit about this whole area of cryptocurrencies. It’s been around for a while. But for folks who may not be clued in, maybe you give us a high level definition of what exactly cryptocurrencies are?

The State of Bitcoin

Small Business Trends: Where does Bitcoin fit in with cryptocurrencies?

Chris Poelma: Oh, great, great question. So first on cryptocurrency. It’s a multiLedger technology. By that I mean there are public servers that many businesses around the globe actually set up to where they run an open source code based platform. And every financial transaction that occurs. Every single financial transaction that occurs in a crypto in a specific cryptocurrency is encrypted, if you will. Via an algorithm and it’s placed and bundled into what are blocks and create something called a blockchain.

It daisy chains these blockchains together in bundles, and so in their own way they become unique but they write those transactions and those bundles across hundreds and thousands of servers that are accessible. Anybody can view, so they’re publicly facing and transparent. In this way, if somebody wanted to try and steal money or hack money in terms of balance, they would have to, one, decrypt exceptionally long complex algorithm strings. And two, they would have to hack not one, but tens of thousands of servers to change the data. So it becomes very trustworthy.

Bitcoin was one of the original creators of what is a multiLedger currency to allow people to buy and trade items of value using individual coins, monetary units referred to as Bitcoin. It’s actual the monetary value and it is also the name of the brand. They’re one of the oldest, one of 2600.  In fact if you were to go on to coinmarket.com, you would find that they’re valued somewhere in the neighborhood of $175 billion U.S.

Small Business Trends: I see a lot of folks were on the speculative side of Bitcoin but has it entered mainstream business yet or is it still sitting there trying to cross the chasm?

Chris Poelma: Yeah, great question. In NCR Small Business, we have a tablet point of sale solution called NCR Silver and we are integrated via APIs into Bitcoin. I would tell you less than one half of 1% of our businesses actually transact or use Bitcoin.

It’s exceptionally small, used out in the small markets today, it is, you’re right, largely speculative because the value keeps growing. There’s a reason for that, but that’s another technical discussion we won’t get into. But it’s a bit speculative as though you were trading gold again back to the value. But in terms of everyday use and transaction, it’s not quite there yet.

It’s treated more as an investment than it is a currency for buying and selling every day goods like clothes and food and coffee to daily transportation. Bitcoin might be more of an investment but one of the questions we were discussing earlier, the whole Facebook Libra-

What is Facebook Libra and How will it Impact Your Business?

Small Business Trends: Actually, you set me up, perfect segue because I wanted to figure out, talk about what Facebook Libra is and the potential it has for maybe moving more of this into mainstream business?

Chris Poelma: Where Bitcoin is more speculative like an investment because it keeps growing in value because it is so rare and very hard, very expensive to come by a Bitcoin which, like gold or platinum or palladium, which are very rare elements the same way with Bitcoin, it’s harder and harder to get a hold of it.

It becomes greater in value, so it becomes more speculative rather than every day transactional value. To whereas a Facebook Libra is an association, it’s not owned by one single independent company. It’s an organization, it’s an association, it’s a not-for-profit. Yes, it’ll be managed by Facebook’s wholly owned subsidiary called Calibra. It’ll manage and govern the work that’s done for Libra, which Libra hasn’t started transacting yet.

There are other businesses out there, not just technology, but financial banks that are becoming a part of the Libra Association. That not only brings credibility to Libra, but because it’s an association and not-for-profit, it has a higher probability that transacting and trading in Libra will be more for commerce and transactions and less of a speculative and investment product.

Small Business Trends: Facebook made the announcement and it brought all these organizations together. Does Facebook being the face of this have any specific challenges due to their security and data privacy issue?

Chris Poelma: Sure. The hard side is whether it was Facebook or WeChat or Alibaba or Amazon or Google, anytime you have one single entity that is appearing to dominate or sit over what is a single currency, it’s going to cast a shadow of doubt in question.

I think those are all the questions that are coming up, but those questions will come up whether it’s Facebook, whether it’s Google, whether it’s WeChat, regardless of the firm and the business and where they’re located on the globe. Because part of what a cryptocurrency is trying to achieve is a unified currency around the planet, not just within political confines.

In the same way that the value of, let’s say, a ripple or a Libra, in this case, might be trading $2 to one ripple, in the US it would trade at that same exact value in Brazil and in Mexico and in Beijing.

It doesn’t matter where you are around the planet. The challenge with Facebook Libra is it’s one company that’s sitting over it. The benefit, though, what better way could you imagine to bring a cryptocurrency to the masses that a very large social network like Facebook to where they have hundreds of millions of active accounts around the globe that they can easily access this cryptocurrency and be able to transact in trade, real monetary valuable items.

In this way, the chance of it being more than a brush fire but more of a planetary used currency, well, that’s the upside, that’s the power.

Looking at the Future of Cryptocurrency and Facebook Libra

Small Business Trends: If we were to look out five years from now, what would this all look like?

Chris Poelma: Oh, wow. Just like you do in any industry that’s new, you have hundreds, thousands, in this case we’re up to 2600 cryptocurrencies that are traded on, or tracked, on the market index, ongoing market index. There will be more, and so over a period of five years, you’ll establish or you’ll see a dominance by not one but maybe two, three, four, five, you’ll see consolidation in the industry and you’ll see over a period of time just like we had the challenge back in the day in technology of VHF and UHF, right?

One wins out just like alternating current and distributed current, AC and DC. Just like automotive manufacturing in the US, you had all those cars 100 years ago, different manufacturers. I’m showing my age here.

Small Business Trends: I’m there with you.

Chris Poelma: You’ve got the big three in the US and now you’ve got international players that have come to our show and we’ve gone international. So to be a global player, it’s very typical that you start with many, many, many and over a period of time, if it truly is better for the masses, easier, more accessible, more people are using it and above all, they trust it which will be the key hallmark.

That’s the cornerstone, if people generally trust it and it is all those things, then you’ll see cryptocurrencies start to unify into a single or fewer cryptocurrencies that are transacted and traded around the globe. That are used by many, used by large percentages of the population, but yet the cost of that cryptocurrency come down significantly.

In that way, it is truly better, more egalitarian for all. It won’t be without its challenges and it will take more than five years and we are definitely on the forefront of that.

What Does Your Small Business Need to Know?

Chris Poelma: Great question. I think, first and foremost, it’s just be aware that it’s there. They do not need to run out today and get a point of sale system that manages or can handle a MultiLedger currency. It’s not happening tomorrow. It’s not going to happen realistically next year. Or the year after. Because to do this, you would have to have people, the masses, be willing to move off the dollar. Or the Peso or the Lira. And move on to a single cryptocurrency.

They, as business owners, small business owners, directly proportional to the amount that they would transact in a Bitcoin or Ripple or Ethereum or any one of the other coins that are out there. The more they transact in it then the more likely other people are, it’s directly proportional in percentage of another number of customers they should expect coming through their door.

Small Business Trends: How does NCR help small businesses start down this process?

Chris Poelma: We are on the edge of this. On the forefront of this. In small business, we run hundreds of millions of transactions globally on an annualized basis. So we’re aware of the cultures. And the cryptocurrencies. And we are taking seats in some of these. Becoming more active in some of the cryptocurrencies. Our interest is to become an enabler for the businesses as the demand grows.