White House Kicks Off “Made in America” Week 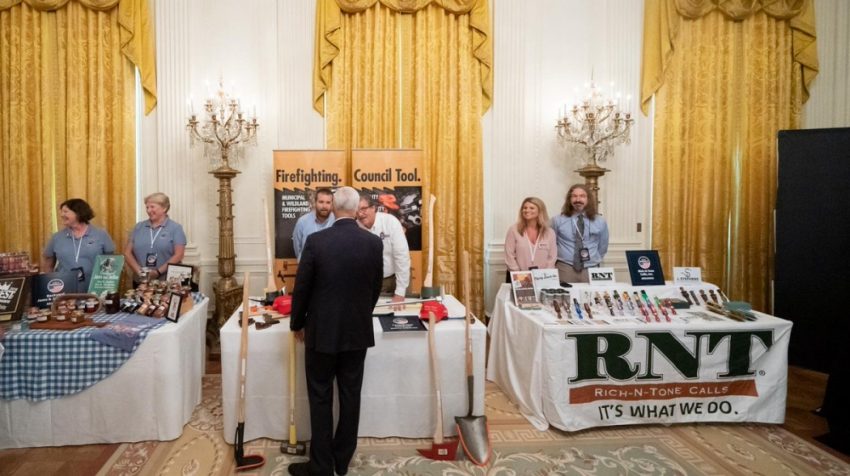 Yesterday the White House proclaimed the start of Made in America Week, which runs July 14 – 20, 2019.  The week kicked off with a “Made in America” showcase for products made in the USA.  The showcase featured manufacturers, makers and crafters – representing each of the 50 states.

You could think of it as a trade expo, only it took place at the White House instead of a convention center.  And there was the gigantic THAAD missile brought in by Lockheed Martin, something you don’t see everyday.

Still, plenty of small businesses were featured. The products covered a huge range, including:

“Joining us today are manufacturers from all 50 states. And they are terrific talents, terrific craftsmen, terrific business people. We have hats from Wyoming, sandals from Florida, Tabasco from Louisiana, Airstream trailers … from Ohio, and custom-built motorcycles from the great state of Indiana,” said President Trump in his live remarks at the showcase.

This coverage below by a local Nexstar NBC affiliate gave one of the best business focused accounts of the event. Correspondent Brie Jackson reported, “Several business owners I spoke with say they’ve benefited from the Trump Administration’s policies. They are urging lawmakers to work together to support more American workers.”

The President highlighted the contributions of American manufacturers, noting they have contributed $250 billion more to the economy since 2016. They also created 600,000 manufacturing jobs.

President Trump also used the event to announce the strengthening of “buy American” policies.  He pointed out that up until now, products could be 50% foreign and still count as American made.  However, he took the opportunity to sign a new Buy American executive order to gradually increase the standard for American-made to 75% for most products, and 95% for certain products like steel.

Made in America Week

The Proclamation announcing Made in America Week highlighted the contributions of American entrepreneurs:

“On Made in America Day and during Made in America Week, we honor the extraordinary efforts of American entrepreneurs, workers, and farmers in revitalizing our Nation’s economy. Products made in America are the world standard for quality and showcase the craftsmanship of the most innovative, diverse, highly skilled, and dedicated workforce in the world. When we buy American-made products, we support the American workers who build them and we invigorate the American economy, driving job growth, spurring innovation, and bolstering the middle class.”

The President summed up the impact of American-made products stating, “When we choose American-made, something truly wonderful happens: Our communities thrive and flourish, our neighborhoods bustle with commerce, our children dream bigger and bolder, and the bonds of loyalty that unite us as citizens become closer, richer, and deeper than ever before.”

Vice President Mike Pence also attended.  The image above shows him viewing some of the American-made products on display.  More can be seen on his Twitter timeline here and here.