Rick McCutcheon of Full Contact Selling: How Does CRM Benefit Your Business? It’s In The Data, If the Data is in Your CRM 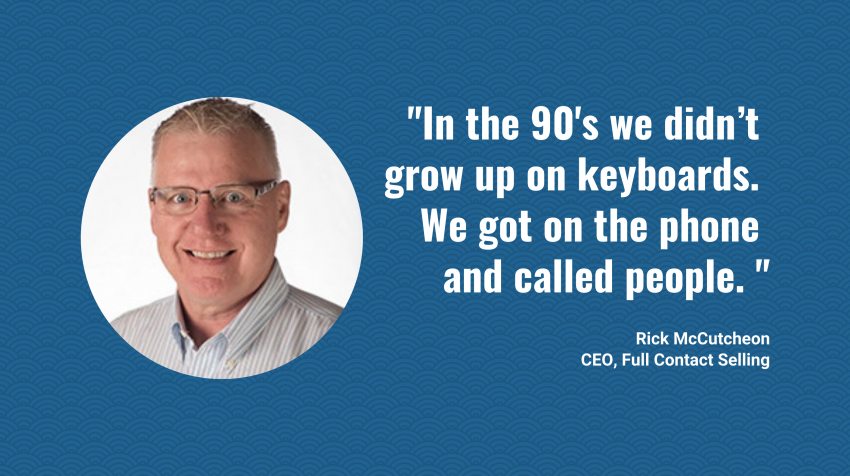 A few months back we posted a question here at SBT asking what are the biggest challenges when it comes to using customer relationship management solutions.  Over 500 people responded, and the biggest challenges — hands down —  were manually entering and maintaining data, and understanding how CRM really benefits “my” business.  So I asked a number of CRM vendor execs how artificial intelligence (AI) — the current phrase on everybody’s tongue right now — might be able to address these issues.  Their answers will be featured in my October column for CRM magazine.

In the meantime, as part of a broader conversation on what’s going on in the Microsoft Dynamics 365 CRM world, I had a chance to ask Rick McCutcheon, CEO and founder of Full Contact Selling, for his take on this. Rick is an expert on social selling, and is one of only 85 Microsoft Dynamic MVPs in the area of customer engagement.

Below is an edited transcript of our discussion on how AI and automation in CRM can benefit SMBs.  But to hear the full convo about how Microsoft Dynamics 365, CRM and other pieces of the Microsoft puzzle are coming together to create an integrated productivity/engagement platform watch the video, or click on the embedded SoundCloud player below.

Meeting the Challenges of CRM

Brent Leary: How would you answer those challenges? A, data too hard, too much time, too difficult to put it in, maintain it, find it. And the one that really, still in 2019, is really interesting to me is, I don’t know how CRM benefits my business.

So what do I mean, that data’s worth money? Well, if I want to capture my customer, if I want to sell services my customer, if I want to understand my customer’s business, it’s got to be data. Even if I go to a third party company and bring in data, I need the data. And when I’m working with salespeople — that’s been my career, my company’s Full Contact Selling – I look at it this way; You can remember who you’ve got to follow up with on the short term sales. So something’s going to close over the next 90 days, you’ve probably got it figured out. But the ones that take longer, 30, 60, 90, 123 days to close. If you don’t have that in CRM, you will forget about it. You won’t follow up with it.

And we can prove that by looking at the email of a sales rep a year back and saying, who were you talking to then that you’re not talking to now? And did they go and buy? Or are they still in that buying cycle? And you know what? If you would have put them in the CRM, you’d still be in the selling cycle with them. So once they start to understand that I’m good at short term and short term memory, but I need CRM to really keep me in the game for the longer term.

Confronting Resistance from Your Team

I did a project two years ago, east coast of Canada, probably about 20 sales reps selling technology. We customized the whole system for them and it was all pull-downs. They could go down and add an opportunity, just pull-downs, click, click, click, click, click. Selections, the companies were in there, select what company. It would take them no longer than, I would say, maybe a minute and a half or two minutes to complete an opportunity.

So the sales rep says to me, “I’m not giving you that data.” I says, “What do you mean you’re not giving me that data?” He said, “You don’t need it.” I said, “I don’t need it. I’m just here to help. I’ll go talk to your VP of Sales. He needs it, right?” They only want to give you what, and I’m not saying all sales reps like this, but there’s a lot of that still out there. You’re on a need to know basis on what’s my pipeline, because I really don’t want you to know how I’m performing.

Understanding the Benefits of AI

Brent Leary: But if AI allows them to actually start feeling like they’re getting a benefit… Let’s say AI helps them find an insight, because hopefully it’ll pop up the insight and say, hey, you should talk to this person right now, because if you do it right now at this stage of the cycle, you’ve got an 80% chance of closing, or something like that.

Which you know that AI helps with. But we also know that there’s integrations and there’s more and more ways that this data is getting into the system without them having to type. But so isn’t it maybe just letting them know that, hey, it’s not just about putting data in at this point. The data is finding its way in. But in addition to that-

Rick McCutcheon: How’s that data related to other data?

Eliminating the Challenges of CRM with Automation

Brent Leary: And instead of you having to look for it, now it’s popping up and you don’t do anything. You just have to use the system now. It seems like there’s still a large group of people who feel like CRM has basically been etched in stone for the last 10 to 15 years. And they don’t understand that, it’s actually not just a place that people put data anymore. It’s a place where systems put the data, and then the system should tell you what data you might want to use, and then how you may want to use it at this point.

Rick McCutcheon: Absolutely. Absolutely. Especially when we start to talk about LinkedIn Sales Navigator, another product for Dynamics, InsideView. There’s these products that can say, let’s look at your pipeline, let’s look at who you’re going after. Here’s 20 other companies that fit that profile. Have we talked to them? What have we done with them? All that sort of stuff.

So it’s hard for me to argue with the person that doesn’t want to add data to the system. Because to me, it’s ridiculous. If they don’t want to do it, they don’t want to do it. But if they want to learn what they can do with it and understand with it… And that’s what companies are investing in now. They’re saying, okay, we have this data. How does it set up with other data? How does it relate to other data? And what can we do with it? We’re in that digital transformation.

Benefiting from the Data Without the Effort

Brent Leary: I tend to believe that the folks, they want the data, they just don’t want to have to work to put it in or maintain it.

Brent Leary: So if they are open to the fact that, hey, you don’t even have to do much of that, or at least as much of that, as you had. Maybe those are the folks that Rick will want to talk to.  (Laughter)

Rick McCutcheon: Absolutely. And you know, we can do stuff, like I use Dragon Speak (speech recognition software). I don’t know if you ever used it, but I can type [via speaking] 80 words a minute with Dragon Speak or I can pick up my keyboard and type at about 25 words per minute. So there’s voice, and the voice stuff’s getting better all the time. So if you’ve got to add data to a system, add notes to a system, you can do it over a phone, you can do it over a PC. There’s tools that can help you.

Seeing the Benefits of Conversational CRM

Brent Leary: And just generally speaking, in the CRM industry, you’re starting to see the whole idea of conversational CRM come to life, where instead of typing and clicking and swiping, you are talking directly to the system and getting answers or inputting data. But as long as you’re able to do so without having to type sit down and type or click or search.

I think as people become aware of systems that are more conversational in nature that allow you to do more with your voice, they’ll start coming to see that this is not the CRM that they’re probably used to and maybe gotten burned by over the years. But it’s there and it’s coming. Once people realize that, then you’re going to see an acceleration and adoption that we probably haven’t seen before using them.

Rick McCutcheon: And as these millennials get older, you got to remember, they grew up on keyboards. Whereas in the 90s, we didn’t grow up on keyboards. We got on the phone and called people, where everything today now to them is chat and whatever. So adding data to a system, to them, it’s just a natural thing and they can do it very quickly. So it’s going to become less and less of an issue going forward.