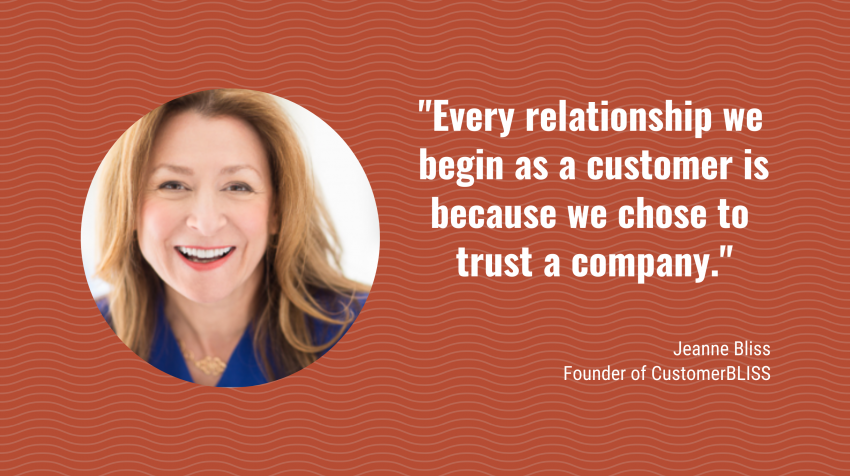 Oracle recently conducted a study of 1,100 US consumers. And last week the company released a report of the findings called “One Size Doesn’t Fit All.” Oracle created the report in partnership with and features analysis by Jeanne Bliss. Bliss serves as a leading customer experience thought leader, author and founder of CustomerBLISS. Some of the top line findings from the report include:

I recently spoke with Jeanne to get her take on some of the main themes and findings of the report.  Below is an edited transcript from our conversation.  To see the full interview watch the video, or click on the embedded SoundCloud player below.

Brent Leary: What are the things that stood out to you the most after you got a chance to look at this data?

Jeanne Bliss: I think what’s interesting is it’s very difficult these days to bucket people absolutely into love something or doesn’t love it. We were talking about the fact that some older people, older, I’m not sure what older means, right? Some older folks aren’t in to talking to Alexa, et cetera. But some are.

I call this building your customer respect delivery machine where you have to offer multiple options and allow the customer to pick and choose when and where and how they’re going to interact with you. It creates a lot more complexity, but when companies finally recognize that it’s not one or another thing, but you know, you probably do this yourself, you’re on the phone and you also might be chatting and then you’re straddling the web.

So I think it’s really that a customer’s orientation drives their understanding and their comfort, and if you first start with recognizing that your job is to deliver respect, it means you need to offer these things but also offer the customer the choice to choose which one they’ll interact with you on.

Brent Leary: One of the things that shows up in this report, and I’ve seen it over and over again, is this idea that customers are willing to pay a premium for good experiences today.

Jeanne Bliss: Well, absolutely. It’s interesting, I was mentioning I started my career a million years ago, and we saw that way back in those dark ages that our product wasn’t the most inexpensive, but we were building. You know, we had 98% customer loyalty and repurchase rates. And there are a lot of companies out there where if you’re wrapping an experience deliberately around your product and your people are, then you can gain a premium.

So, it’s about your product and your service and then also about your responsiveness. How much are you there for people on their terms? Because I think that’s a lot of what this report is tickling out is the respect, and where people feel disrespect, they look for another choice of interaction.

Breaking Things Down by the Numbers

Brent Leary: I like the study because it kind of breaks it down and they have the overall numbers, but then they also categorize it in terms of these different age groups.

Brent Leary: But one thing that carries over is trust, the importance of trust when it comes to customer experience and the interactions between a consumer and the vendors that they patronize.

Anything jump out to you in the area of trust, and particularly you look at Gen Zs, millennials, Gen Xers and baby boomers?

Jeanne Bliss: Yeah, I would actually click together trust and values.

So, it was interesting is think about your life as a customer. Every relationship we begin as a customer is because we chose to trust a company. We trust realtors to help us find a house, we trust doctors in the medical profession to make us better, we trust our lawyer or financial services people to get us in the right place, we trust insurance companies. But as we interact with them, does the paperwork, the policies, the processes, say to us as customers, we trust you in return.

Taking Stock with a Trust Audit

That’s number one. I always encourage my clients to do a trust audit. Read all your stuff, all your fine print, all your policies, all your procedures, and also are you putting your employees in a position to trust your customers? Because all of this connects. What’s on the inside shows up on the outside. So if your employees don’t feel you’re trusting them, then because you’ve got so many rules and guidance, you know, how many times have you been 12 minutes late returning your car rental or two days out of warranty or whatever? And what are you interacted with?

The other thing I think’s important about this, as you mentioned, is that as people are coming into the workforce, values and trust and what I call congruence of heart and habit is very, very much a part of their decision-making. They’re going to work with companies where they feel they’re acting in a manner that’s congruent with their own personal beliefs, and trust is very, very foundational to those beliefs.

Brent Leary: One thing too, I’m looking at this: “Consumers trust sincere content that adds value to their lives.” It seems obvious. That makes a lot of sense. What is sincere content?

Jeanne Bliss: I think that a little bit of cynicism seeps in here, even we were talking about this among ourselves as as we were looking at this, is if you’ve got a testimonial, you want to make sure the person isn’t paid for the testimonial. You want to make sure that these are real people and then it’s not a bunch of packaged stuff that somebody is in like a machine room manufacturing content.

I think sincere content in that context means real, true, and of the moment, versus manufactured, especially as we’re looking at people who are standing up and advocating for companies.

We had a conversation the other day about that. Is there a little bit of cynicism with this, especially younger groups of people when they’re reading these big accolades?

Moving Towards a New Kind of Purchasing – Maybe

Brent Leary: At some point, because it isn’t happening right now from a shopping perspective, do you think we’re getting closer to when people feel comfortable about not only turning your lights out or turning your heat on, but buying stuff with your voice?

Jeanne Bliss: I think it depends. That’s why it’s interesting because so many of the answers to these questions, and you are seeing it, it’s sliced and diced, is, it depends. To your point, you were an early adopter. You probably would be just fine.

I interviewed, last week, the chief customer officer of TGI Fridays, and he said, “Look, we’re appealing to the people sitting on their couch that says to Alexa, ‘I want my order of TGA Fridays’, and they just have to say it to Alexa and then they don’t even have to pull their wallet out. They have to just put their thumb on their phone and zoom, it’s out. Or if they know you’re ordering regularly, a text will come at five o’clock and say, ‘Do you want the same order? We’re ready to go. Just push Yes.'”

And so I said, “What about the creepy factor of that?” which I think is part of the answer, and 70% of people were not creeped out by it and loved it. But those are probably like you, the early adopters to this as well.

I get a sense, and again, I think that there is some age dissection in that. I live in an environment … I’m in Seattle. I’m in a very technology-driven environment, so even though I might be considered old because I’m 60, oy, I’m an early adopter because of environmentally where I live. But demographically I might be considered a later adopter, and that’s why I think some of that “it depends” kicks in. How much is it a part of your life? Do you have young grandchildren who will take you along for the journey?

I mean, we’ve heard about all those stories where the kids are able to order everything. Kids are ordering stuff. They’re cooking whatever they want, movies. It’s pretty insane.

Brent Leary: You hear all the things in the news, things going on with Facebook, certain things with Amazon, some things with Google. Siri. I mean, they all have some issues. It doesn’t seem to be stopping a good number of folks from using them.

But do you see these issues standing in the way long-term, or is this just like any other new technologies that had to get the kinks worked out all before they hit the mainstream?

Jeanne Bliss: Well, I think that the privacy issues and a lot of these other things, data issues that we’re seeing and feeling uncomfortable with are becoming a little bit of an underbelly of this. But, if you’re hip. If you’re hip. If you’re hooked on calling Alexa for your TGI Fridays, are you going to stop doing it? I don’t know.

I think, again, when this becomes a part of how we live our life, the underbelly modicum of fear or worry or concern, also our tolerance for it seems to raise.

But we’re all ramping up to have this be such a pervasive part of our life, at least early adopters, or the people in the middle with early adopters in their life, which is probably why I get dragged along for the ride.