Quiz: Which Presidents Were in Business? 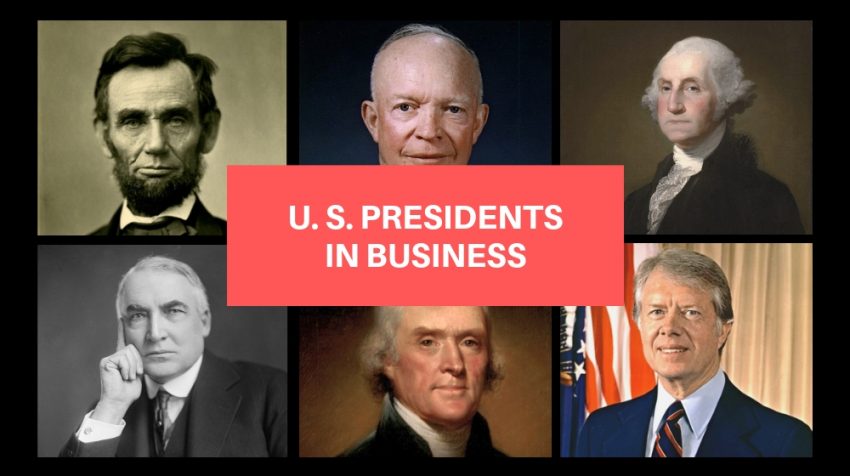 The United States has had 45 presidents in its history. And many of those presidents were generals or served in politics as governors, senators or other positions.

But seven presidents were entrepreneurial and ran small businesses before entering the White House. In addition, a handful of other presidents had meaningful business experience or ran businesses after leaving the presidency.

Once you hit the “Finish” button, information about each correct answer will be revealed. A passing score is 70%. Take the quiz and see how you do!

Quiz: Presidents Who Were in Business

Congratulations! You passed! Scroll down to see more details about each answer.

Sorry, you need to brush up on your U.S. Presidents. Scroll down to see correct answers.

#1. This President was a farmer, amassing 8,000 acres. His former home is a famous tourist attraction.

George Washington was a farmer when he was not leading revolutionary armies or running the country as the first U.S. President.  He also was a surveyor.

Washington inherited the famous Mount Vernon estate in Virginia from his brother. After marrying Martha, a rich widow, he added acreage and eventually grew the farm to around 8,000 acres.  At one point he operated a whiskey distillery business on the farm.

Upon leaving public office he went back to being a farmer. He died after falling ill due to riding his horse in the fields during a snowstorm.  Read more.

#2. This President took over the family business in the peanut industry.

Jimmy Carter was a peanut farmer in Plains, Georgia before being elected president.

After leaving the presidency, he went back to running the family peanut farm again.

#3. He failed at a retail business in Kansas City before becoming President.

Truman and a partner set up a hat store in Kansas City. After just three years the business failed, in 1922. The store was $20,000 in debt — a lot for the time.

But Truman refused to file bankruptcy. It took him 15 years to repay all his creditors.  Read more.

#4. This President owned a newspaper at the age of 19.

Warren Harding bought the struggling Marion Star in 1884 for $300 he raised along with some friends. Harding turned the paper into a success, in part with the help of his wife. One author wrote about his ownership, “His newspaper … had been his constant companion for all of his adult years — almost a living, breathing being in his eyes, a project that he had nursed from its infancy.”

Harding still owned the paper when he became President in 1921. Read more.

Ben Franklin also was a newspaper publisher, in addition to amassing a fortune as a printer and publisher of Poor Richard’s Almanack.  In fact, Franklin’s newspaper was the most successful in the American colonies.  However, although Franklin signed the Declaration of Independence, he was never elected president. See more about Franklin.

#5. This President was an inventor and farmer. He was the first patent examiner of the very first U.S. patent.

Jefferson owned the Monticello estate where he farmed.  He wrote: “From breakfast, or noon at the latest, to dinner, I am mostly on horseback, Attending to My Farm or other concerns, which I find healthful to my body, mind, and affairs.” Read more.

Jefferson was an inventor among other talents.  He created a few of his own inventions, including a revolving book stand. He also improved upon other inventions.  Lesser known fact: Jefferson served as a patent examiner. It was Jefferson who approved the very first U.S. patent granted. That was in 1790.

Yet, Jefferson initially was against patents believing they fostered monopolies. Over time, however, he began to see how patents actually encouraged invention by protecting rights.  Read more.

#6. He served as a union boss. Yet, he is known for being pro-business.

Ronald Reagan was pro-business. Yet by trade he actually was an actor. For five years he served as president of the Screen Actor’s Guild, the union for actors, championing the rights of workers.

Reagan is one of only two presidents to have carried a union card before taking office, both in the Screen Actor’s Guild, according to one historian. (Can you guess the other? Hint, it was for his work on The Apprentice.)

#7. After leaving the presidency, this President became a film producer.

Barack Obama and his wife Michelle became film producers for Netflix upon leaving the Oval Office.

The duo inked a deal reportedly worth many millions of dollars. They formed a company called Higher Ground Productions to produce content, Netflix reports.

#8. This President is said to have changed skylines through his real estate business.

President Trump’s daughter Ivanka often spoke of how he altered skylines through constructing tall buildings, before entering the White House.

#9. He bought into a grocery store which failed. He then became a postmaster and a noted lawyer.

Abraham Lincoln bought an interest in a grocery store / dry goods store called the Lincoln-Berry Store in 1833. Lincoln was 23 years old and had no money. So he went into debt to buy the stock and his ownership interest, giving a promissory note to the seller.

By all accounts Lincoln wasn’t cut out to be in retail. His partner liked to drink too much. Lincoln preferred to read about the law and discuss politics. Eventually Lincoln became a postmaster and from there went on to become a lawyer.

Later he went into politics and became one of our greatest presidents.

It took Lincoln years to pay off the debt from his failed ownership in the store. Read more.

#10. He earned his way through college by starting a laundry service. Later he started a mining consulting business.

He had an entrepreneurial bent, having started a student laundry service in college to help pay for his schooling. After graduating he traveled around the world working in the mining field, including spending time in China, becoming an authority in his field.

Afterwards he went into public service and eventually won election as president. But he was blamed for the Great Depression and lost his re-election bid in 1932.