Watching Amazon: This is Why Jeff Bezos is Worth $130B and You’re Not 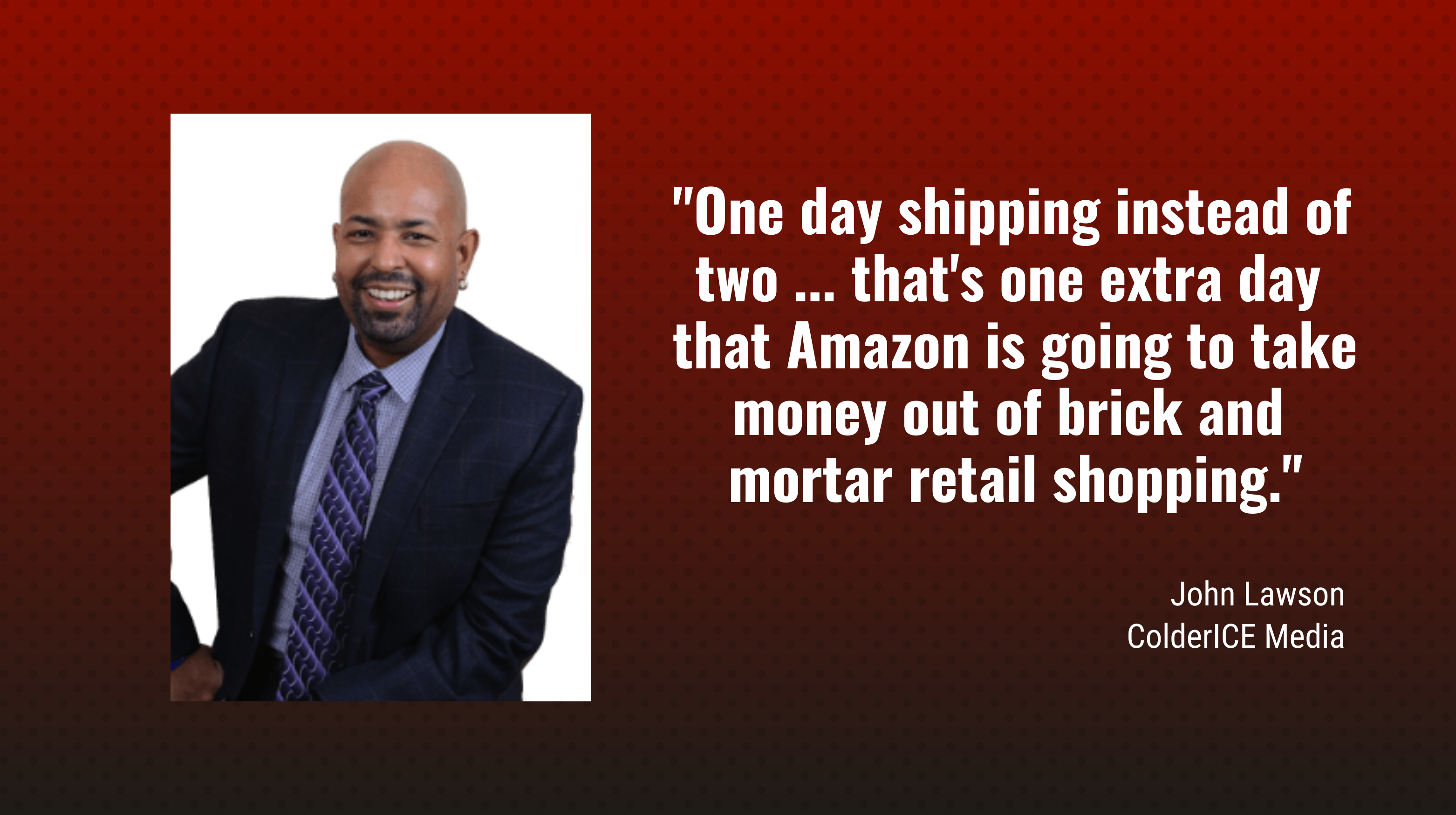 This week my Watching Amazon show co-host John Lawson and I talked a couple of times about Amazon’s latest earnings report.  And despite revenue going up 20% year over year, many financial analysts and pundits were disappointed that Bezos and Co. didn’t meet expectations, causing the stock price to take a sizable hit.

Why Amazon is So Successful

Then we get into an interesting story of how before Amazon opened up their cashier-less, AI-driven Go stores, Bezos did a walkthrough that changed the direction of the shopping experience.  And possibly these two stories together help to illustrate why he’s the wealthiest man in the world, and why we’re just a couple of guys Watching Amazon….

Below is an edited transcript of our conversation.  To see the full convo watch the video here, or click on the embedded SoundCloud player below.

What a Difference a Day Makes?

Brent Leary: All right. So, remember we did a show months ago where Amazon said that they were going to invest $800 million in the current quarter for their one-day fulfillment shipping stuff?   Well, they just said, “Yeah, we overshot that.”

Brent Leary: So if they overshot that number, that means they spent a lot more than they thought.

John Lawson: Right, and it’s going to cost them a lot.

Brent Leary: And that impacted  their latest earnings, right? So what if they got it all straightened out, they spent all they had to, and it starts to work for them in the coming quarters… I don’t know how this could impact revenue; maybe having one-day shipping, people start actually ordering more from that. And now that they have got that infrastructure in place, they do not have to carry over the 800 million dollar investment again.

John Lawson: How many quarters?

Brent Leary: I don’t know how many quarters it might take. It may take the next two. Maybe a year.

John Lawson: I think it would take… It might take, yeah.

Brent Leary: But let’s see if it actually starts showing up in the fourth quarter. Like Black Friday, Cyber Monday, will the ability for Amazon to deliver in a day as opposed to two days really impact sales?

John Lawson: It will on December 23rd.

Brent Leary: You know I’m speculating here. Let’s say that the past… They had their issues with UPS, and it killed them. Let’s say they got all that taken care of.

John Lawson: Which they did, for two-day.

John Lawson: So now let’s see if they can do it for one-day.

Brent Leary: For one-day. Does that make a difference in people’s buying habits?

John Lawson: Well… we’ll see.   Because here’s what happens: the people that wait until the last minute… me…

See Also: Why These Innovative Technologies are Worth Every Penny

John Lawson: Will just wait one more day. You know?

Brent Leary: So does waiting one more day make you feel like, “I could order more stuff at the last minute”?

John Lawson: Well, I’ll tell you one thing: one of the things is that, of course, Thanksgiving… and we don’t run the same cycle that we used to run.

John Lawson: But Thanksgiving always can be x amount of days until Christmas.

John Lawson: And so when it’s longer, you do sell more.

John Lawson: But of course, that cycle is kind of changing now, because we are buying earlier and earlier, and Thanksgiving is not necessarily the kickoff day anymore.

John Lawson: Right. And so all of a sudden…

Brent Leary: So this could actually…

John Lawson: I might be able to just be like, “Dude, I can go to Amazon, it’ll be here tomorrow.”

Brent Leary: So if we take it to that case, the impact could be potentially more taking from a Wal Mart and transitioning that over.

John Lawson: For others.

Brent Leary: That net is still the same [amount spent], you think.

John Lawson: It could be. This will be a good one to watch with the one net. That will pay off. Any signs of that is a payoff for them.

Brent Leary: That’s really interesting. Yeah. That is actually worth the investment, because that is still a growth opportunity.

John Lawson: It’s a growth opportunity. And they can do all kind of… They’re going to do all kind of promotions around it, because they’re watching the show, and they’re getting the ideas from here. So. But it’s going to be pretty… It could be pretty interesting. I want to watch that one.

Brent Leary: So this earning report, Amazon got hit, but this hit may be a good thing in the long run.

John Lawson: What’s interesting, and a lot of you might not know this, but we went into the back end for the third party sellers, and all of a sudden on August 8th, you are not allowed to use FedEx to ship product into Amazon warehouses.

Brent Leary: So that is another potential thing.  Because we haven’t even touched on the potential revenue stream for Amazon Shipping. So if their sales are up, that means their shipping is up.

John Lawson: Has to be.

Brent Leary: Which means they could get revenue on both of these pieces.

John Lawson: When you say “their shipping,” what are you talking about?

John Lawson: Oh, I’m sure that’s paying off in fist loads. And we’ll see that more and more as they start dumping all of these third party shippers that they have had to use.

Brent Leary: So that is what I’m going to be watching.

John Lawson: Yeah, that’s going to be a good one.

Brent Leary: We’re going to be watching if single day delivery translates into more sales, if those sales come at the expense of last-minute shopping in-store, and we are going to be looking at how Amazon’s shipping starts to pay off in terms of additional revenue from shipping.

Why Jeff Bezos is Worth $130B and You’re Not

Brent Leary: All right, now, what’s your last one?

John Lawson: So my last one. It’s pretty interesting. And it’s like we all know about the Amazon Go stores.

Brent Leary: I’ve been to one.

John Lawson: You walk in, you shop, you walk out. But this story in Bloomberg is talking about in the fall of 2015, when Amazon executives that were in charge of this big top secret project, they took Bezos into the store, and had him walk through the store. And inside the store they had the butcher, right? Where you get your meats. And in that Go store set up, they had a bakery and-

Brent Leary: So there was a butcher.

John Lawson: They had a butcher.

Brent Leary: There was a baker… Was there a candlestick maker anywhere?

John Lawson: And the deal was though, he was impressed… He said, “Hey guys, this is a great idea. I’d love to move forward,”. But there’s one problem. And the problem was the butcher. He removed that part out of the grocery store. So it was supposed to be a grocery store, and that’s how it ended up being more like a 7-Eleven. Because he said that [the butcher] part is still a frustration point, and if we removed that, it would make it that “Go”.

Brent Leary: So he just doesn’t like the butcher, huh?

John Lawson: Right. It’s not that. But he told the executives that it was just that experience there at that counter felt disjointed from the experience of the rest of the store.

Brent Leary: You know what? He’s right.  When you think of a convenience store, you think of speed. And if you add a butcher, and people asking for this cut of-

John Lawson: Right. You’ve got to stand in line still.

Brent Leary: You got to stand in line. You start taking a number and all. That completely does go against what you think about with this.   My Amazon Go store experience, it was so cool because I didn’t have to spend time at a counter.

John Lawson: You didn’t have to talk to anybody.

Brent Leary: I didn’t have to talk to anybody, but they did have people there to answer questions if you needed them.

Brent Leary: But it wasn’t at a counter, or at a desktop, or standing in the line.

John Lawson: I just think that is very intuitive of him to come through… and you figure all of these people have worked on this store, and they’re at the point now it’s like, let’s bring Jeff in.

Brent Leary: They probably thought, we got it.

John Lawson: Yeah. It never occurred to any of them how disjointed that little part of the shopping experience would have been to the Go experience. And they removed that.

Brent Leary: Well that’s why he is worth $130 billion.