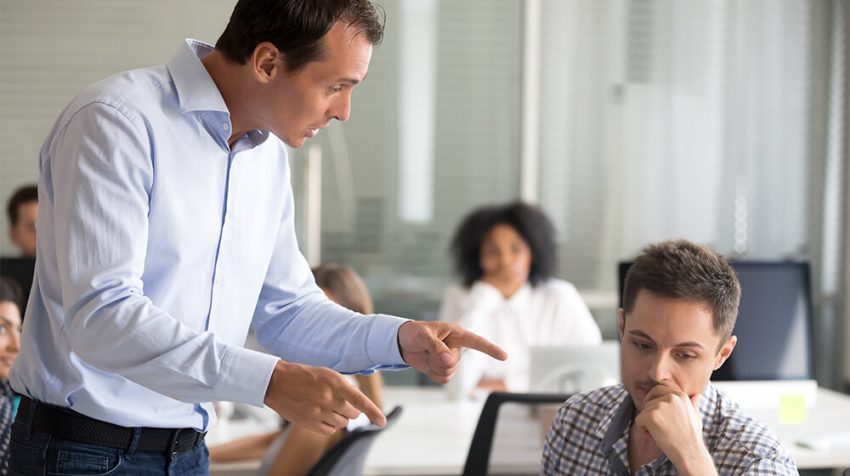 According to the National Sleep Foundation, staying awake for 18 hours straight makes you drive like you have a blood alcohol level of .05. And the longer you stay up beyond the 18 hours, the worse it gets.

Would you go to work with a .05 blood alcohol level? The answer is probably no. But if you are not getting adequate rest, you are not at your best and your performance will suffer.

A survey from Savvy Sleeper looks at how the mood, performance, generosity, and other qualities of supervisors are affected by poor rest.

The company surveyed a total of 5,350 participants, with 1,887 reporting they had supervisorial positions. For this particular survey, the research looked at 759 respondents who slept notably well or notably poorly. This the company says is to ensure the accuracy of the analysis of the topic in question.

General State of Rest Amongst Supervisors

In general, how well are bosses sleeping? In the survey, only 1 in 4 or 25% say they are well rested. More than half (55%) are in the middle, stating they are not notably well or poorly rested. But a noteworthy percentage (20%) say they are poorly rested.

When it comes to the average sleep both groups get every night, there is an almost two-hour difference. Those with enough rest sleep 7hr-15mn, and it goes down to 5hr-15min for those not getting enough rest.

The reasons they are not getting enough rest is work-related stress, pain, and soreness. And while both groups are affected by these explanations, the impact is higher across the board if they respond they are not well rested.

The impact of proper rest is clear, as 90% of those who sleep well say it has a positive effect in their workplace. Those who didn’t sleep well (70%) say it has a negative effect at work. So, you can imagine what the working conditions will be for employees under both groups.

Effects of Sleep Deprivation on Supervisors

The difference between supervisors who sleep well and those that don’t is quite dramatic. It can be as high as 30% in some cases.

If you don’t get enough sleep, you are probably grumpy. So, it is not surprising 75% of supervisors who sleep well are friendly with all their co-workers. And although it doesn’t go down a lot, 63% of the poorly rested supervisors say they are friendly. 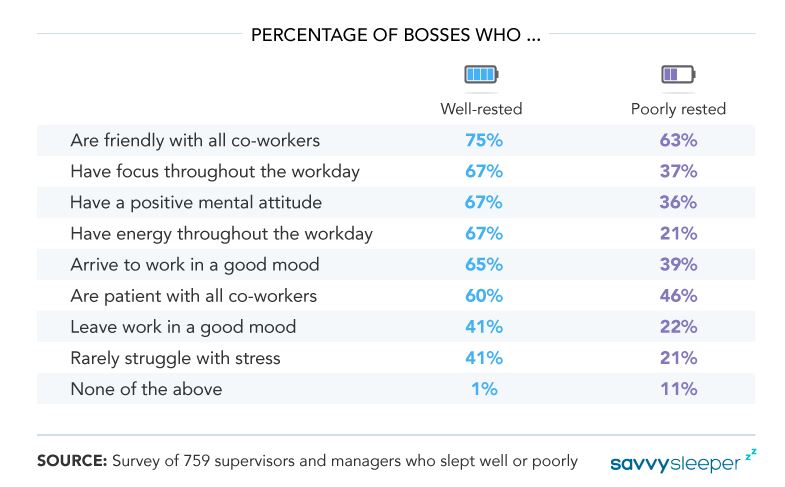 For supervisors, better sleep equals more success. And this success is driven by the increased hours of productivity and focus as a result of quality rest.

In a 40-hour week, getting good rest results in four more hours of productivity and six hours of focus. And without the necessary rest, supervisors are finding it hard to fulfill their responsibilities.

More than two thirds or 67% of bosses without quality rest are struggling to fulfill their responsibilities. But it goes down to 49% for those with good rest, an almost 20 percent difference.

As the data points out, getting good rest will not solve your managerial duties. In the report, Savvy Sleeper says, “So even though proper sleep can sharpen your cognitive skills and keep you on track throughout the day, being unable to stay on top of managerial duties seems to be a challenge for most bosses.”

Quality rest is one of the many tools supervisors have to use in order to keep their organization in tip-top shape. When you include it as part of your toolset, you will be better prepared to tackle many of the challenges which come your way throughout the workday.