20 In Office Event Ideas for Your Small Business 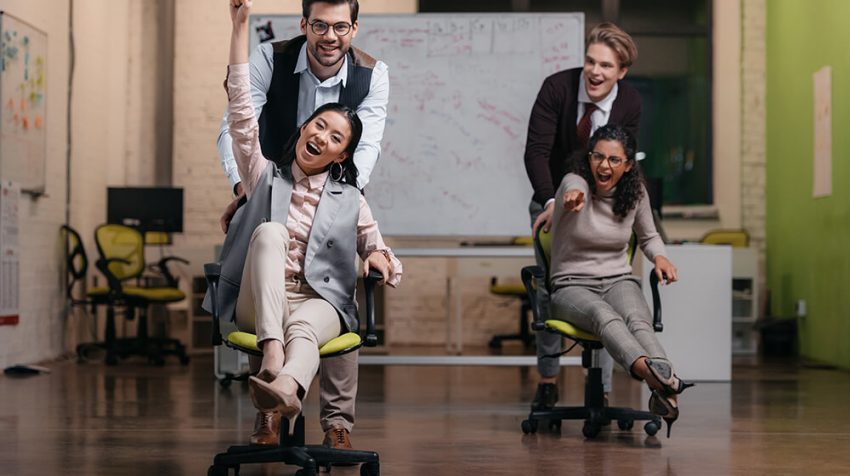 Small business owners need their staff to bond with each other in order to ensure a good working relationship that benefits the company. They can achieve this with a variety of events and activities that are either free or inexpensive and can be hosted right there in the office itself.

Here are twenty of the best in office event ideas.

Two Truths and a Lie

A brilliant ice-breaking game that helps team members get to know each other better while having a bit of fun in the process. Form a circle and have each employee introduce themselves before revealing two true things and one false thing about themselves. Everybody else then has fun trying to figure out which of the three things is not true.

Gather everyone together and start a story with three sentences, then say ‘suddenly…’. This is the cue for the next person to continue the story with their own three sentences, which they end with the word ‘suddenly…’ again. The next person then takes over and so on. This word game helps your staff innovate new content based on what came before as well as forcing them to be creative while the spotlight is on them.

Get several of the same jigsaw puzzles and split your staff into teams who must then race to complete the puzzle before their rival teams. It is an excellent activity for developing teamwork skills and helps focus their collective minds on a single task.

This team-building exercise has been gaining popularity in the last few years due to its quirkiness. Split your staff into teams who must use only simple materials such as sticky tape, cardboard rolls, paper and the like to create a structure around an uncooked egg that must protect it when dropped from a significant height.

This fun game has been parodied in a number of TV comedy shows, perhaps most notably in The Office where the well-meaning but idiotic Michael Scott makes an utter mess of his company’s diversity training day. Stick to celebrities from any era and write their names on paper that you stick to each other’s foreheads or backs and then try and figure out who is written on yours.

This game is a test of your staff’s descriptive and communication skills as well as their creativity. An object or shape is made out of building blocks (such as Lego) and one member of each team gets to ‘sneak a peek’ at the structure before returning to their group and describing it to them so they can recreate it as accurately as possible.

Spend an afternoon engaging in some board game tournaments to relieve stress, reward employees for their hard work, and to help everybody either work together or compete in friendly fun. The low stakes of such games means everybody enjoys themselves, even when they lose!

Expand everybody’s knowledge with a few rounds of general knowledge trivia as well as some specific categories that are relevant to your business or individual members of staff. Split into teams to challenge each other and work together to win points and maybe even a prize!

This game involves teams describing a phrase or thing without saying the name of it directly. It is a great way to get your employees working together while teaching them how to communicate with one another.

Improv or comedy workshops are another fun way to help your staff develop useful skills such as communication and concentration. These interactive experiences can be hosted right there in the office, and for a small fee you might be able to get an experienced improv expert to pop in and get the shenanigans underway.

Get each member of staff (including yourself and other management) to share a hero who influenced them, a special highlight of their life so far, and also a hardship that they endured and perhaps also had an influence on the person they are today. This game helps you all get to know other on a much deeper level, strengthening the bond between you and the respect you have for each other.

A simple card game where teams must work together to remember where matching pairs of the same symbol are in an arrangement of otherwise facedown identical cards.

Instead of the boss deciding who is the employee of the month according to sales figures or other such stats, let the staff themselves vote. Other factors then come into play besides just cold hard numbers. It might be someone’s willingness to help others will see them rewarded, or perhaps another’s dedication to tasks that often get overlooked will finally get some recognition.

While hopefully not something your staff will actually ever need, knowing that your workmates are equipped with the knowledge and ability to handle a terrible situation will strengthen their bond and the trust they have in each other.

A foosball or table tennis table are not too expensive and don’t take up much room, but they can be great for staff to unwind and you can even organize mini-tournaments to encourage fun interactions between staff members.

Organize a themed sales day that alternates work tasks with games. Provide snacks to enhance the fun factor and perhaps even encourage fancy dress for the day. Award fun prizes for the teams or individuals that generate the best sales for that day.

Come up with several questions in a variety of categories related to your business or industry and then form teams to compete by answering the questions.

This team-bonding and problem-solving exercise involves everyone standing in a circle, putting their right hand in the air and grasping the hand of someone on the other side of the circle, then linking your left hand to someone else’s. Then the game is to untangle yourselves without letting go of each other’s hands. Sounds easy until you try it.

Split everybody into smaller groups and then challenge them to sort themselves according to a variety of categories. Some of the categories can be easy such as height, age or hair length.

However, you can really help them get to know each other by including categories such as how many countries they have visited, how many music bands they have seen play live, how many siblings they have or how many sports teams they follow. The possibilities are quite literally endless.