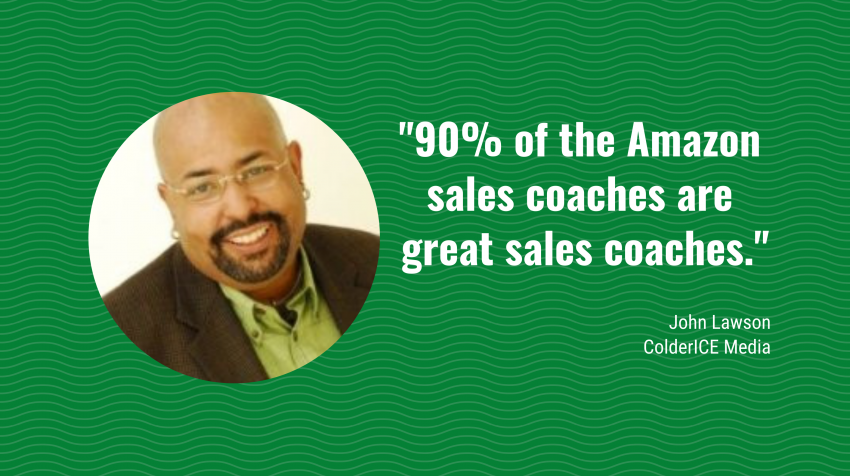 Amazon reported third-quarter profit of $2.1 billion yesterday, or $4.23 a share, on sales of $69.98 billion. Now to me that sounds pretty good compared to sales of $56.58 billion a year ago, but earnings declined from $5.75 a share, the first time Amazon earnings decreased year-over-year since June 2017.  And that news was enough to knock Amazon’s stock price down enough to make Jeff Bezos only the second richest person in the world, instead of numero uno.

Losing billions of dollars in market cap and personal wealth wasn’t the only tough news Amazon had to deal with this week.  Two other nuggets that caught John Lawson and my attention as guys who Watch Amazon was third party sellers selling expired food items and “coaches” teaching people bad selling practices, causing Amazon to have to start suing people.  So we devoted a couple segments to the impact bad sellers and rogue coaches are having on Amazon.  Below is an edited transcript of our conversation.  To see the whole convo watch the video or click on the embedded SoundCloud below.

Brent Leary: Now we have to say, it’s actually the third parties that are selling this stuff.

Brent Leary: I mean, it’s being sold on Amazon’s platform and it’s being delivered by Amazon.

John Lawson: Yes, by Amazon, that’s being pulled, packed and shipped by Amazon and it’s to Amazon’s customers. So it’s an Amazon problem.

Brent Leary: It is an Amazon problem.  But it’s a problem, marshaling their third party sellers.

John Lawson: Oh absolutely. But food is the big, big win for Amazon, right? They really want to get into the food game massively. But if I’m getting spoiled milk and baby food….

Brent Leary: That can be some seriously devastating stuff.  You don’t want to take any chances. Amazon, they really have to do a better job policing their third party sellers because it may be a third party seller, but it’s Amazon. Everybody’s going to be pointing to the reputation hit is going to be on Amazon. The lawsuits are going to be against Amazon.

John Lawson: Right and it says many brands have actually grown so frustrated by the abundance of expired products, that they are taking steps to help clean up the marketplace themselves.

Brands Have Begun to Step In

John Lawson: That is good, but I mean, it’s bad.

Brent Leary: It’s bad if they have to do it, but it’s good that they are doing it.

John Lawson: That’s an important thought that we’re talking about Amazon is responsible, but I bet you Amazon is not even getting a portion, a large portion of the complaints. Because if I ordered Gerber baby food from Amazon, I’m going back to Gerber and asking why you all send me so blah, blah, blah, blah, blah?

Brent Leary: You think so?

John Lawson: Oh yeah. Some of them are going probably straight to the brand saying you’re selling expired products.

How Some Third Party Sellers are Endangering Ecommerce

Brent Leary: How are those third parties getting that stuff that’s expired? To sell?  Cause they’re not getting it from Amazon, they’re getting it from somebody else. Right?

Brent Leary: The third parties are getting that stuff to sell.

Brent Leary: Right. So this is actually like a system wide problem.

John Lawson: It is like there’s errors all through the system. Absolutely.

Brent Leary: So you would think that it wouldn’t just be Amazon then? It could be anybody who has third party selling on their platform should be experienced in this stuff. Right?

John Lawson: You know what, here’s another thing that could be happening to. That third party sellers sending their stuff in.

John Lawson: And it could be on time and it just sits there so long. It’s not being rotated because you send your stuff to one warehouse and Amazon takes the liberty of moving it all over there.

Brent Leary: So does this mean that Amazon has to take it upon themselves to make sure that something that may have come in perfectly within the expiration date, but it doesn’t get sold until after the expiration date? So they have to have systems in place now to check to see if somebody is buying something, to check to see if that is expired or not?

John Lawson: No. All they need to do is have somebody check on the date when it comes in and enter it into the system. Then it will automatically expire on its day.

Brent Leary: So as soon as it expires then it has to be taken off?

John Lawson: Before the date or be destroyed. Amazon should be doing that.

Brent Leary: They’ve got to be able to take it off of the website.

John Lawson: Yeah. I think all the responsibility kind of comes with the person picking it off the shelf.  It’s a system that should be rolled and put in place.  For public safety and for a better experience for Amazon shoppers.

Brent Leary: There was a story that came out and I applaud Amazon for this. Amazon is suing e-commerce coaches.

Brent Leary: That’s what they call themselves apparently. They alleged that these coaches are teaching people basically bad selling practices, bad tricks, little things to try to get around the right way of selling stuff on Amazon.

Bad Ecommerce Coaches Get a Time Out

John Lawson: That’s pretty bad. They’re scamming, that’s what they call it. They’re saying that they’re scamming people and you know how these things’ kind of work when it comes to the scammers. First, let’s just say 90% of the coaches, I know a few, so I’m going to say 89% of the coaches are 100% great sales coaches. But there are some people out there that are, you know skirt right on the edge or even do totally black hat stuff.

John Lawson: I think the deep one is the infringement that they went all the way into and saying you’re infringing on our trademark. That’s going to be.

Brent Leary: Because that makes you look like Amazon approved the stuff that they talking about.

John Lawson: Right and you know what a lot of coaches do that, they are using the Amazon brand to make it seem as though, but I, you know, what are you going to do?

Brent Leary: See that’s why I’m very skeptical of “coaches” unless the coach has a ball, or a whistle or is talking to folks that are six foot five, 300 pounds or something like that.

John Lawson: I mean, come on. There are people that do training that can help you source products and teach you those kinds of things. They’re not going out pretending to be Amazon straight coaches. They usually help you with your FDA, your sourcing, your pricing. There’s a lot of areas to this game.

John Lawson: Well you’ve got a problem with the word coach.

John Lawson: But I mean if you’re at the gym, you want a coach, right?

John Lawson: So I’m going to update my resume.

Brent Leary: Get that coach thing off…. [both laughing]