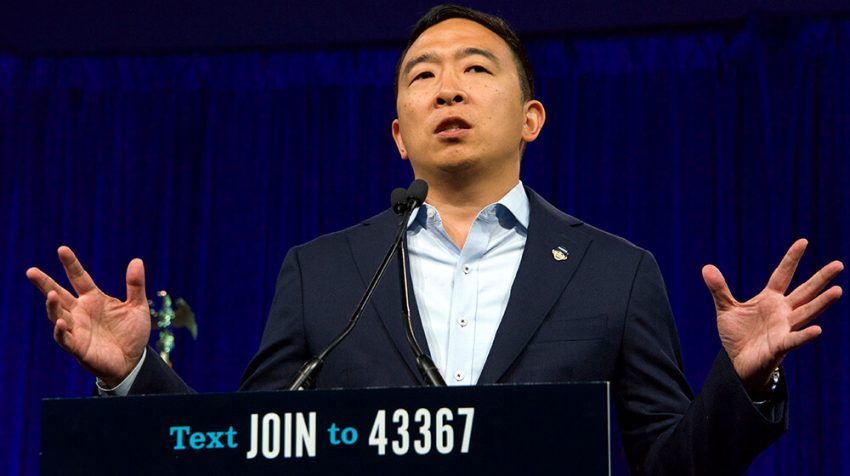 Yang’s comments diverged from other candidates’ calls to break up big tech, especially Massachusetts Sen. Elizabeth Warren, who has been largely campaigning on the issue of companies like Facebook and Google growing into monopolies and threatening competition.

“Mr. Yang, Sen. Warren is calling for companies like Facebook, Amazon, and Google to be broken up. Is she right? Does that need to happen?” moderator Marc Lacey of The New York Times asked him.

Yang said Warren “is 100% right in diagnosing the problem,” but added that “we also have to be realistic that competition doesn’t solve all of the problems.”

“It’s not like any of us wants to use the fourth-best navigation app — that would be cruel and unusual punishment. There is a reason why no one is using Bing today. Sorry, Microsoft. It’s true. It’s not like breaking up these big tech companies will revive Main Street businesses around the country.”

“We have to hone in on the specific problems we’re trying to solve and use 21st-century solutions for 21st-century problems. Using a 20th-century antitrust framework will not work. We need new solutions and a new tool kit,” Yang said.

When Lacey turned to Warren for a response, she said she is “not willing to give up and let a handful of monopolists dominate our economy and our democracy.”

“It’s time to fight back,” she said. “Think about it this way. When you talk about how it works in competition, about 8%, 9% of all retail sales happen at bricks-and-sticks stores — happen at Walmart. About 49% of all sales online happen in one place. That’s Amazon. It collects information from every little business, and then Amazon does something else. It runs the platform, gets all the information, and then goes into competition with those little businesses.”

The Massachusetts senator released a plan in March to break up big tech companies like Facebook, Google and Amazon by imposing rules on tech companies with $25 billion or more in annual ad revenue, which would dramatically impact their success in online commerce.