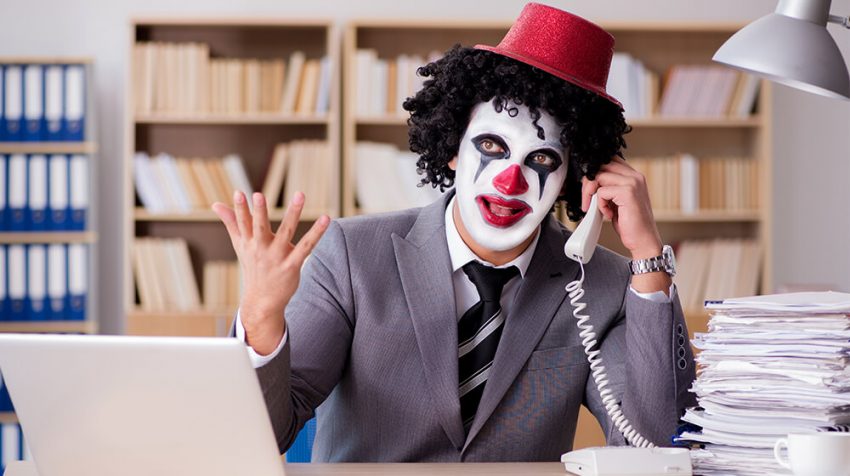 How popular is Halloween? According to the National Retail Federation’s annual survey, Americans were set to spend around $9 billion in 2018. And more than a third of this tally ($3.2 billion) went to costumes.

So, who are the people spending the $3.2 billion in costumes? Well, they could be your employees. And if you’ve decided to allow your employees to wear costumes to work, you also may want to join them! Of course, you’ll also want the costumes to be appropriate to the work environment. But where can you and your employees get Halloween costume ideas?

Search no more. Here are 40 office Halloween costume ideas that will allow you and your employees to have fun while still projecting the right image for your small business.

Halloween Costumes From The Office

It seems appropriate to start this list with ideas from hit NBC television show The Office. And the effort Dwight Shrute puts into his costumes on the show should help get the ball rolling. Here is Dwight as the Joker from “The Dark Knight”.

This is from the Employee Transfer episode which aired originally on October 30, 2008. 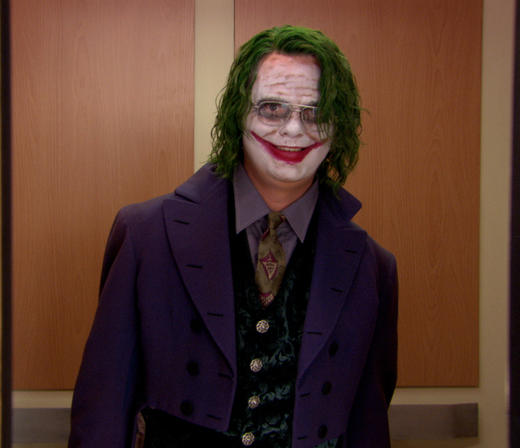 Let Your Employees Dress up as You

Your employees may be concerned they’ll get in some hot water for doing this. But assure them it’s all in good fun (as long as you’re comfortable taking a joke.) If everyone goes along with it, this could be great for morale!

The popularity of The Office means it has fans across all demographics. And with Dwight’s shenanigans on the show, it is only fair anyone should be able to dress like him. Here is a simple costume which shows your appreciation for Dwight.

“are you trying to hurt my feelings? because if so, you are succeeding. fortunately, my feelings regenerate at twice the speed of a normal human.” -dwight schrute • happy halloween ? ?: @taijaayotte

Emojis let you express how you feel when you are messaging. This makes another easy DIY costume. You can create emojis on a piece of cardboard with different emotions and use different ones throughout the day. Or have one displaying them all at the same time.

Another thing which is synonymous with Halloween is candy. So why not go as cotton candy. Here’s a playful DIY costume you can make with just a few items. 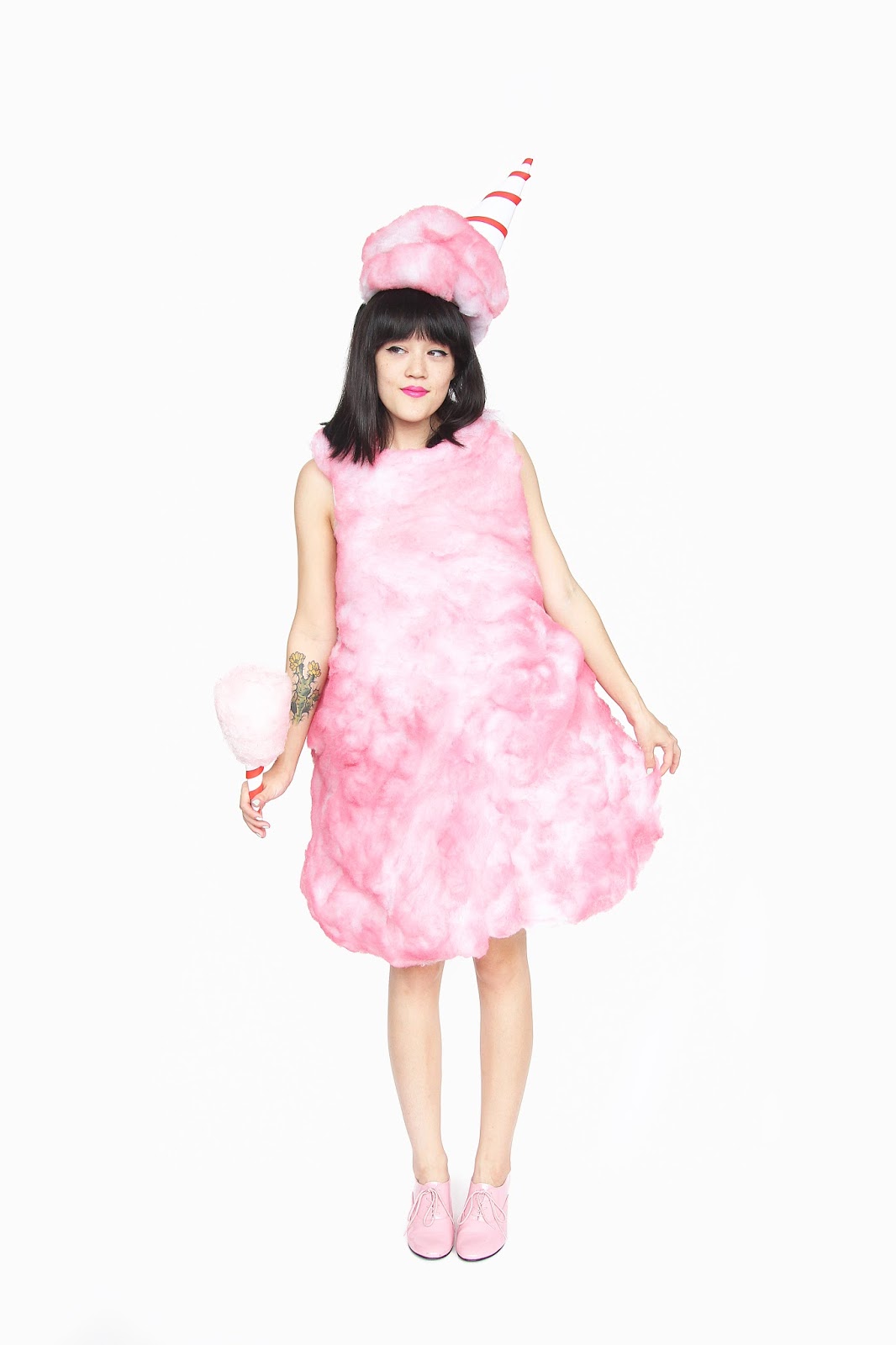 Here’s an all-time classic Halloween costume classic. While it is not as original, men and women can go as a vampire. You can give it your own twist by adding special-effects, contact lenses and more.

While still on the candy theme, it wouldn’t be Halloween without candy corn. This fun and bright costume will cheer everyone up at the office.

See Also: 10 Office Space Ideas You Can Use Right Now 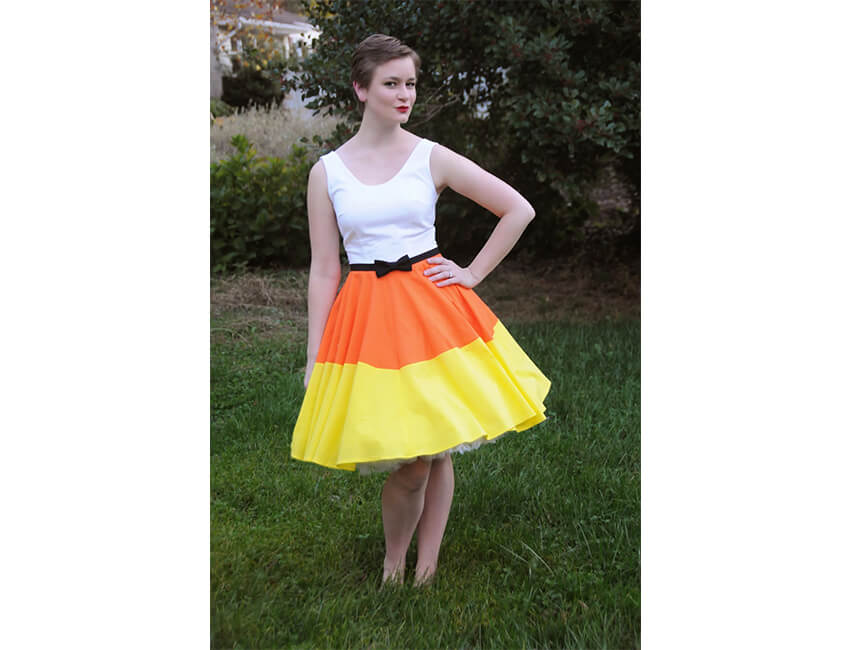 Two holes in a sheet and you have a ghost costume. As far as Halloween costume ideas for office workers go, this has got to be one of the easiest ones.

A Fortune Teller in your Office

One way to get everyone in the office to participate in the festivities of Halloween is to go dressed as a fortune teller. This costume is especially creative if the person also includes some of the tools of the trade.

Want to be a vegetable, fruit, snack, dessert or any other food type? Dressing as an edible is very popular. You can be as creative as you want with these ideas. Just make sure you will still be able to work with your costume.

This costume could actually be a two for one. You can dress in a suit with glasses and be Clark Kent. But if something should arise in the office, you can unbutton your shirt and reveal you are actually Superman.

This costume has become popular in the past couple of years. However, you can add your favorite social media channels and make it your own.

I've always been teased about being a social butterfly ? so I thought it only appropriate to go as one to work today! I so enjoy pun inspired costumes.

If you have black skinny jeans, a striped shirt, suspenders and a beret, you have yourself a mime costume. Add the white makeup and you are ready to amuse your co-workers all day long.

A certain president has made Twitter more popular than ever. So why not go as the Twitter bird and get everybody tweeting. This DIY costume comes from Elizabethany, a radio and social media personality.

The Cast of Seinfeld

If you have a small or large group, this costume idea can include the four main characters, or many of the other well know supporting cast. You can take it a step further and include the whole office. Speaking of offices, you can do this for The Office or any of your other favorite shows. All it takes is clothes you probably have in your closet

Happy Halloween Weekend from my squad to yours ?#wherestherockemoji ??? #teachercostume #diycostume

What about the Spice Girls?

This is a tongue in cheek take on the girl band Spice Girls. Instead of tight revealing outfits, these ladies are wearing aprons with actual spice tags.

On the slightly creepier and adult side, you can do The Addams Family. If there is one family which epitomizes Halloween, this one is it with a great sense of humor to boot.

Photoshop is so popular it has become a verb. And if you make your costume this intricate, your co-workers will be asking if you have been photoshopped.

Temporary tattoos are a great way to create a different persona. They are cheap and easy to apply. You can go all out and really create a great costume with this idea.

This costume uses a simple play on words to get its message across. You’ll make co-workers think for a minutes than laugh at the pun. This is easy to do, funny and not too outrageous. 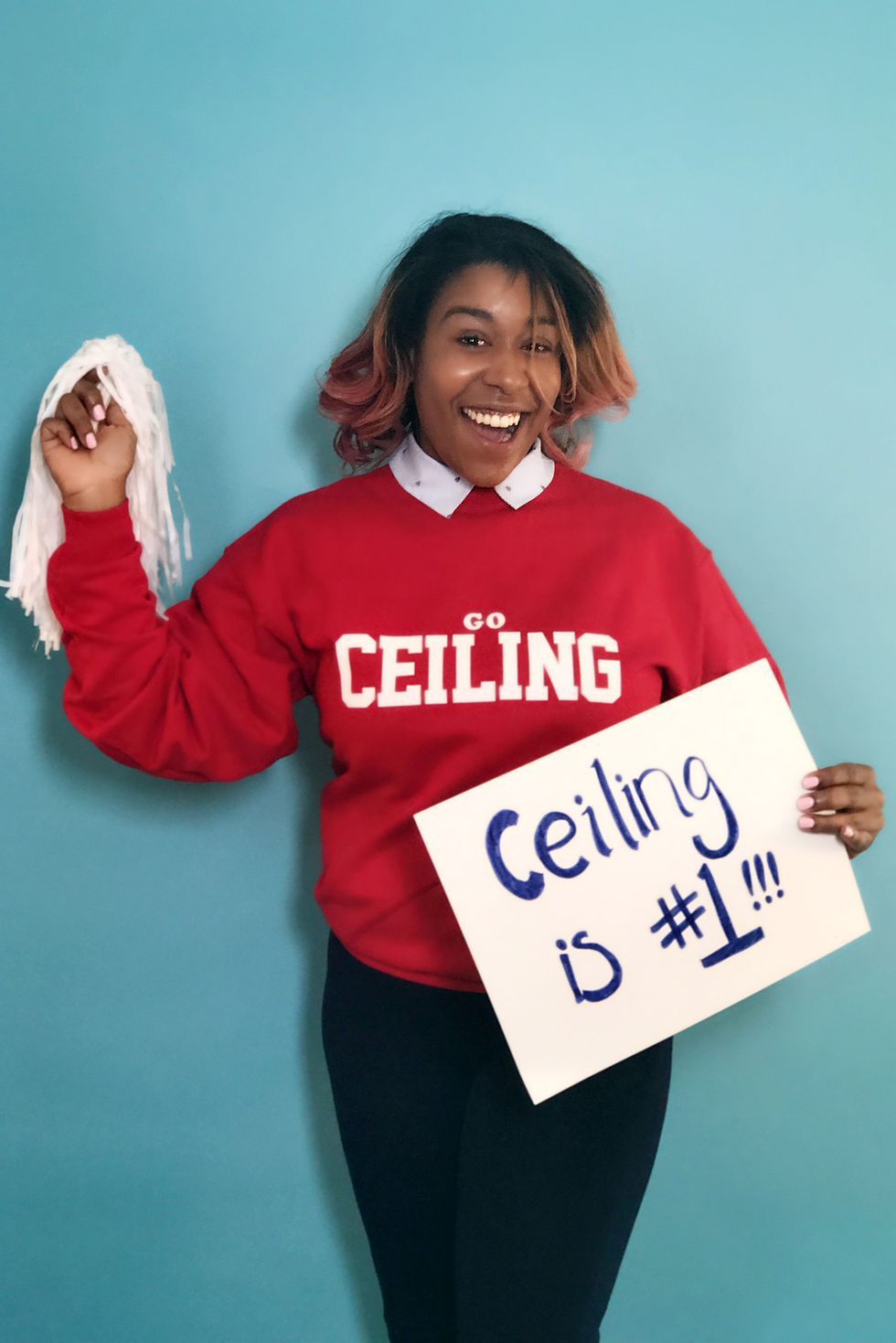 Do you work at an accounting firm? What better way to keep everyone on their toes than to dress as Uncle Sam. All you need is a top hat, a white wig, a bow tie, a goatee and you are set.  You can add the coat and the striped pants if you want to go all out.

This is another costume which takes the meaning of a word literally and makes it funny. All you need are some medals around your neck and some bread. 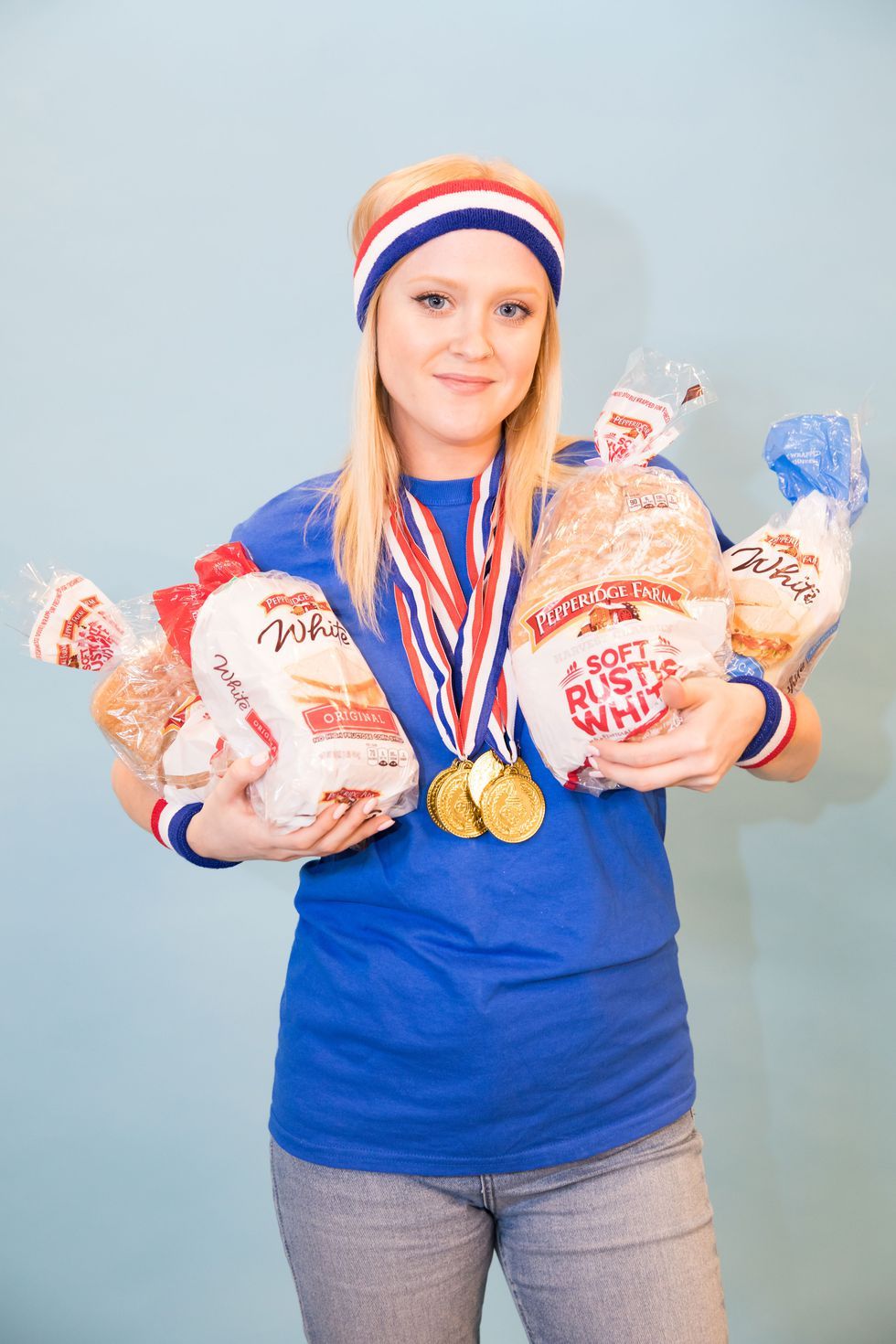 We’ve already mentioned Superman. When it comes to costume ideas, comic books provide a treasure trove. Spiderman, Wonder Woman, The Hulk, Super Girl, and the list goes on. Choose your favorite superhero and go for it.

Flo from Progressive was one of the most successful marketing personalities with more than 100 commercials. If your industry handles insurance, so much the better.

buy the item that is between my pointer finger and thumb

You can go solo as a single Minion or include everyone in the office as part of a theme. This is also an easy and fun costume the whole crew can participate in.

Long after his passing in 1995, Bob Ross is more popular than ever. With this costume, you can include a co-worker and bring the whole thing together.

Just take some post-it notes, write different messages and pin them on a long-sleeved shirt. And you will become a bulletin board. You can make this bigger by making yourself one large post-it note.

This costume will require some space, but if you can pull it off, you will give everyone at the office a fun experience.

From Belle to Cruella, Wicked Witch of the East, Maleficent, Goofy, Mini Mouse and many others, you can’t go wrong with one of these costumes. With so many options, you can make it as simple or intricate as you want.

Grease is one of the most popular musicals of all time and you can dress up as any of the characters in the movie. Here’s Rizzo, one of the Pink Ladies. 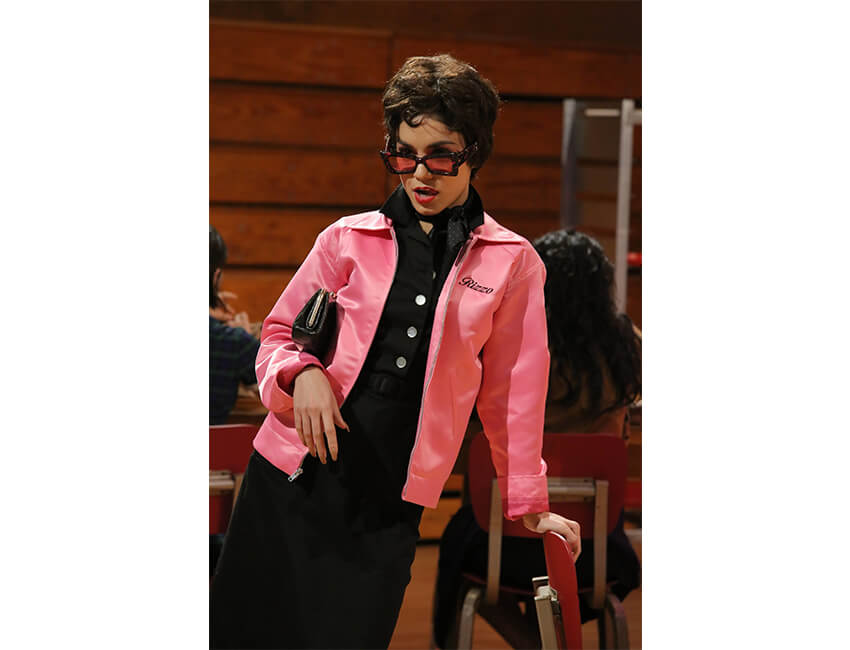 One thing Zuckerberg is known for is wearing the same style of clothes all the time, which also goes for Steve Jobs. So, if you have a t-shirt, hoodie and jeans for Zuckerberg and a black turtleneck, blue jeans, New Balance shoes and a pair of glasses for Jobs, you have two options.

Still, in that era of Grease, a sock hop costume can be worn in any office environment.

Are you the minimalist type? Well, nothing could be easier than this idea which comes courtesy of The Office. All Jim Halper did was write ‘book’ across his face, thus Facebook. This is from the Koi Pond episode which aired on October 29, 2009. 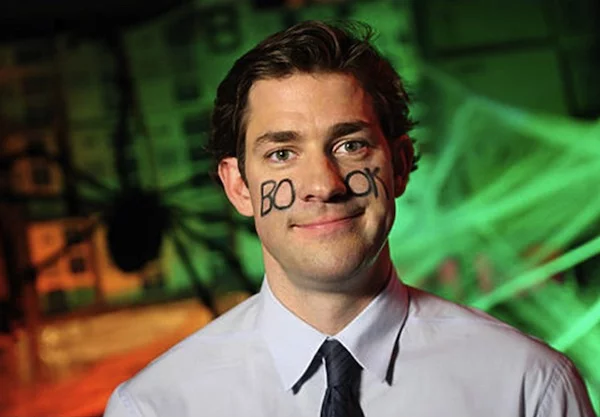 You can easily make a skeleton by cutting the ribs on a white t-shirt and wearing a black top underneath. Add makeup to your face and you have a DIY skeleton.

Thirty years on TV and The Simpsons are still running. And going as Homer Simpson, or any member of this animated family, is one way you can have fun at the office.

A Chip on Your Shoulder

Do you have a chip on your shoulder? Just take your favorite brand of chips, attach it with tape on your shoulder, and there you go — a costume you can put on and take off throughout the day. You can also do this by putting Smarties candies on your pants and going as ‘smartie pants’, cookies with a cap and gown for a smart cookie and the list goes on.

A Costume for You and Your Dog

If your office is pet-friendly, you can always make your dog part of the party. In this case, your dog can be Batman and you can go as Robin. There won’t be a more formidable duo at your office Halloween costume party.

Dressing as your favorite animal is another costume idea for the workplace. This kind of costume can be simple and easy or you can get intricate. It all depends on how much time and money you want to spend, as well as your level of commitment.

As a DIY costume, this is another great idea that is also a lot of fun. Just make two cardboards with alternating colored squares for your top and bottom, and you have a costume. Wear nude color clothes underneath and it will complete the look.

The great thing about Halloween is it lets you express yourself. If you’ve decided to encourage your employees to dress up, make the most of it and enjoy the process and the festivities that go along with it. All you have to do is make sure all costumes are workplace appropriate for your small business.

And if you have any office Halloween costume ideas you want to share with us, leave a comment below.