10 Retail Horror Stories – and How to Avoid Them 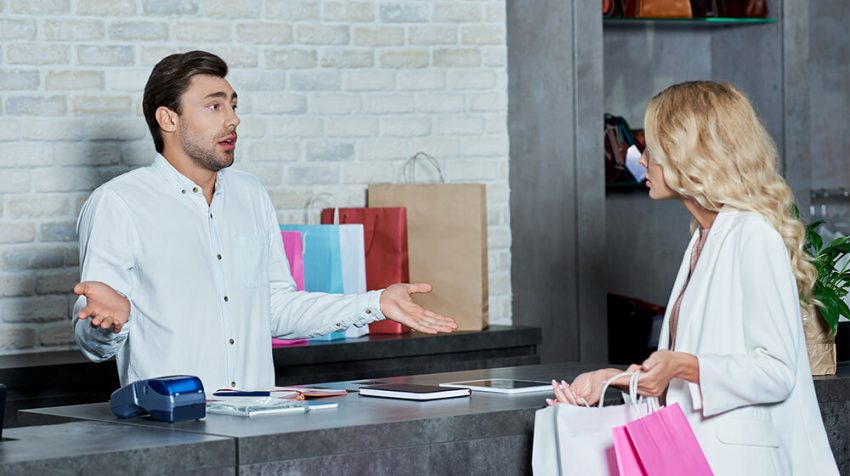 Have you ever worked in a retail business? Then you’ve probably dealt with angry customers. You probably know about strange requests and situations that just seem completely unreasonable. We’ll call these retail horror stories. But you need to be able to navigate even the most unusual situations successfully if you want to make it as a successful retail business.

If you work, or have worked, in retail, you probably have retail horror stories that haunt you. Here’s some examples and how you can avoid them.

Redditor themightythor conveyed a retail horror story from his girlfriend’s time working at Hastings. While working the counter, a man came in and tried to get a refund for a five-year-old gaming console. This obviously didn’t fit within the company’s policies. But when the man argued and asked her to get a manager, she agreed. However, when she turned around, the man apparently got upset that she was walking away from him and threw the device at her back.

Some people who come into your small business will make unreasonable requests. It’s important to have clear policies in place to minimize the amount of times that someone will even attempt to attempt something like this. And of course, it’s important to have protections in place and act quickly if your employees are put in harm’s way.

While working at an appliance store, redditor Screech32210 came across a woman who wanted to exchange a washer since hers was apparently making strange noises. When the crew arrived and started taking the old one, she claimed that they were not allowed to take it because she paid for it. She also claimed that she would sue if they didn’t leave them both. The crew left without taking the old washer or leaving the new one. And since the woman threatened to sue, the company directed her to their legal department when she tried to reach out again.

Though this isn’t exactly a reasonable request, it is important to make sure your employees are very clear about what is going to happen when a purchase is exchanged. It’s also important to have access to legal advice in case it ever comes up.

Redditor Jones3567 was working at a grocery store when one day a customer came to the checkout line with a melted plastic bowl. He had evidently tried to microwave his soup in a bowl that was not microwave safe. This would likely be obvious to most people, but the bowl did not expressly say not to put in the microwave.

In your small business, there may be many things that seem obvious to you, but not to your customers. Even some of the most common sense things should be spelled out, just in case. You can potentially avoid upset customers and broken appliances.

Redditor BadDogClub shared a story of when they worked at a store that had been open for about five years. A man came in trying to use a gift card for the store that had been in that location previously. But that business did not exist anymore. They politely told him this wasn’t allowed and he stormed out.

You cannot control the stores that were around you previously. But it is important to have set policies about gift card usage. And of course, sometimes you have to just put your foot down when customers make unreasonable requests.

The Family That Steals Together

While helping a customer at a thrift store that sold a lot of gold jewelry, redditor bcmc123 noticed that all of the jewelry from their locked cabinet was gone. Upon reviewing security footage, the company found that an entire family, including a mom, dad and young children were responsible for the theft. And they also happened to be regulars at the store.

This story illustrates that anyone can steal from your store. And it’s important to have proper procedures in place not just for locking valuable items, but also for concealing keys or other items they could use to access those areas. It may also be helpful to schedule enough associates so people have the opportunity to actually keep an eye on things.

While working at a bookstore, redditor wdn was approached by a man looking to pay his rent. They were fairly confused by this request, which made the man seem angry. They went to get a colleague who accepted the check and wrote it in a book the other employee did not know about. Turns out, the bookstore owner also owned the building, which contained apartments.

This isn’t specifically a customer service story. But since many entrepreneurs today also have side hustles or multiple income streams, it can help to communicate those things to your entire team.

New and Not Improved

One retail store created nightmares for their employees by completely redesigning the front checkout area without consulting any of the people who actually worked there. This resulted in redditor howsmallarewe’s recent experience where a customer on the phone thought she was next in line and pushed her way to the front of the checkout area. The confusion created not one but two negative experiences.

Changes to your retail experience and design can be a good thing. But you need to consider the experience of your actual customers and employees when doing so, in order to avoid confusion. In many cases, this is as simple as just asking team members for their input.

Redditor KaminariFarron shared about an experience working at a dollar store. While restocking shelves, they noticed an animal noise coming from behind some items. Turns out, a family of squirrels had set up camp inside. The employees a month to try and clear them out of the store. And they ended up calling pest control anyway.

Unwelcome guests can really negatively impact customers’ opinions of your business. So don’t leave it up to employees or anyone but a professional.

Redditor Smollestnugget recently dealt with a customer in a hardware store who had issues finding what she was looking for. She was trying to find aisle 38 but claimed that it didn’t exist. It did. But the employee was not able to leave her station. And the customer continued repeating that the aisle didn’t exist.

Some stores like home improvement warehouses can be difficult for customers to navigate. There may have been more at play in this particular story. But you can avoid a lot of potential confusion by having employees available to answer questions and actually show people what they’re looking for. Posted maps or mobile apps with specific layouts can also be helpful.

While working at a bakery, redditor wwynterstorm had a customer come in to order 60 cupcakes for a shower. The bakery had a special where cupcakes were a dollar one day per week. But this customer wanted to make sure that every cupcake was the best looking. So, with tons of other customers in line, she made the employee pull out trays so she could hand pick each one individually.

Special weekly deals can be great for small businesses. But it also can make things tough on your team and bring out the worst in people. If you’re going to do something to bring more people through the door, make sure you have the bandwidth to handle it. Or put limits on what they can order.