Sridhar Vembu of Zoho: The Only Durable Capital We Have Comes from Our Corporate Culture, Not on Corporate Valuation 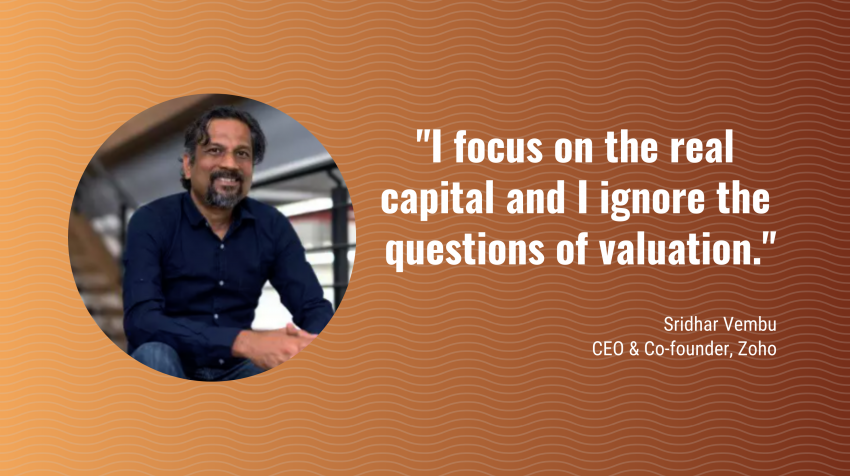 Last week I attended Zoho’s Developer Conference in their Pleasanton CA office and had a chance to sit down with co-founder and CEO Sridhar Vembu for a wide-ranging conversation. The value of corporate culture was among the topics we discussed.  SBT publisher Anita Campbell and I did an “ask me anything” session with Vembu earlier this year at the company’s user conference Zoholics, which was very insightful, but this time around I was able to go a bit deeper on some issues.

We tackled a variety of subjects, including what he feels is the most misunderstood thing about the company, why he continues to watch and model some of Zoho’s practices after companies like Amazon and Facebook, and the role their AI technology (Zia) has played in the accelerated adoption of their Zoho One platform – which in just over two years has gone from zero to 29,000 business customers; even how using Zoho Creator allowed a non-techie farmer to become a developer.  But maybe the most intriguing thought he shares with us is why he’s interested in the capital generated by the company’s culture, more than financial valuations put on corporations.

Below is an edited transcript of our conversation.  To see the whole conversation watch the video here or click on the embedded SoundCloud player below.

The Value of Corporate Culture

Brent Leary: Okay, so I told you that I had to ask you about this saying that you came up with while we were in a meeting earlier today. You said that the only durable capital we have is our culture. It just caught my attention. I tweeted it out. People started liking it. Talk about what exactly does that mean?

Sridhar Vembu: I mentioned it in the context of how so much of what we think of as capital has now come to mean financial capital. The value you place on real capital. Meaning that we are confusing two things here. The value we place on capital with the capital itself. And in fact, as a software engineer, this confusion is really real for me because in C-language for example, they’re all pointed to an object versus the object itself.

Sridhar Vembu: And you don’t want to confuse the two because you’re going to crash the program if you confuse the two. So the thing pointed to a thing is not the thing itself. You can speak as though they were interchangeable but it’s not, that’s a linguistic slate advantage. It’s not really true.

Sridhar Vembu: Why does somebody want to do this? And those are forms of capital. We don’t, we cannot really place a value on it, but all value, financial value, comes from it. And yet, most of the time now we have kind of missed that whole thing, all this process, starts up, how does it arise? And instead we’re focused on the financial values.

Brent Leary: Not on the durable value, but on the valuation.

Sridhar Vembu: Exactly. So in that sense I call myself the real capitalist.  I focus on the real capital, and I ignore the questions of valuation, financial valuation because that’s not interesting to me.

Brent Leary: Zoho is a fast growing company, but you are very mindful of making sure it’s not growing too fast.  Is that because you don’t want it to impact that durable capital (culture).

The Value of Corporate Culture to Growth

Sridhar Vembu: So, that’s the whole cycle. That and all that can happen only if you’re going at a pace that is manageable. A lot of me fears growth for its own sake, and that leads to, again, an obsessive focus on the financial valuation, not on real capital, and a lot of the problems in the economies, we have degraded real capital in chasing the financial catheter.

Sridhar Vembu: That’s how I see it.

Brent Leary: What do you think is the most misunderstood thing about Zoho from the outside world?

Becoming More than a CRM Player

Sridhar Vembu: For a while people thought we were only a CRM player, and then many people thought mainly we’re a small business software company, but our software suite is very powerful. In fact, we run entirely on Zoho, which is 8000 employees within our 20 plus locations around the world. And we are really a multinational, but we don’t think that great. I don’t like to think that way. But we are.

Sridhar Vembu: Actually, there’s a customer I met who has 350 million records on CRM.

Brent Leary: Not at all.

A Focus on Culture and Customer Satisfaction

Sridhar Vembu:  So, that’s an example. One of the things that is not widely understood partly because, no, we are not big on marketing. I mean we actually focus on real, again, real capital, building up that durable capital, durable culture and satisfying customers, word of mouth. Those are all a lot of what we do.

We do marketing, but not as much as what is commonly practiced in the industry today. And that has still allowed us to grow at a very steady, very fast clip for a long period.

Brent Leary: Facebook and  Amazon. Are they still kind of models for you?

Sridhar Vembu: Yeah, it’s, I look at them in this way. I said Facebook is able to handle a billion plus, don’t know 2 billion users. Right? And if you look at the amount of money they spend on the, what we would call, IT operations, meaning the data centers, all of that, it’s got to be a very small number.

It’s approximately every 20 30 40 50 cents somewhere per daily active users for a month, which is a really good metric to focus on because they’re able to do this and that scale with, because they only, they make maybe $10 per daily active user in terms of their ad revenue. This is not about their business model, this is about their operational efficiency in terms of the data centers and the whole infrastructure, how they are able to sell all this traffic, this huge load, on under maybe a dollar per active user.

Finding Something Worth Leaning From

That’s something definitely worth learning from. And I mentioned it also as how this has significant implications for cloud economics. So, that’s one example. Amazon in a similar way, I’ve said that, again the AWS shows you how they’ve scaled this business to $40 billion from zero base in what twelve years ago.

And it’s basically this, that it is, all of this is done, they start with customers who pay them, maybe zero, $10, $20, that some of those customers started there are paying them $1 million a month now, but more.

And that the fact that they started, they could start there, there was not an enterprise sales contract in the beginning, all of that. And they smoothly scale. That’s just too many did their business acumen, right? That’s what learning from. And we’ve modeled a lot of our own, for example Zoho One, this influence of Amazon prime there, a lot of people comprehend that.

And we definitely see there is a similarity here, we want a predictable price. We want to provide you extreme value for the customer. So that Zoho One comes this inspiration from AWS.

Brent Leary: So talk about Zoho One, a little bit, because it’s only been around a little over two years. But you have over 29,000 companies actually, using it.

Brent Leary: Why are companies coming to you for Zoho One? What are they coming to you looking for? Is it the, just the sheer number of apps? Is it the inexpensive nature of it? Is it something else in between?

Sridhar Vembu: It’s all of it.  2019 the cloud is more and more mature. Most businesses know what the cloud is, what cloud apps can do for them. In fact, they are using many of the cloud apps.

The problem is that there’s too many apps. How do you make all this work together?

And in fact some cloud software CEOs themselves admit, my company is using all these apps and I don’t know what to do. How to solve this problem? And they are trying to patch it together. So this problem is real.

The Value of Corporate Culture When Creating a Vision

We anticipated this for 15 years. We know a thing on this vision to bring all this together, but it does of course take a lot of ongoing investment to do this, so now we finally got to it. Two years ago we launched. It’s now just growing up like a rocket, it’s fastest growing. It’s all of these, it’s of course the access to all of the applications.

There’s the predictability of the pricing and the business model. And the affordability. And the fact that all of these apps are built on a common platform and the integrations are, more and more, getting deeper and deeper and deeper.

And if some integration is not there, you will ask us, and we will do it, we’ll turn it off for you. That’s how we are doing it… and the fact that, see, in two years we have added five new apps to this. All the customers automatically got that.  They do not do anything. So you’re deepening the value of the thing that they already are on. It’s unheard of in the software industry as you typically get a call from a sales guy trying to up-sell you to something.

You only just tell them, “Hey, here’s a new product, you already have it”. That’s something that customer’s love.

The Role of Zia in Zoho One’s Success

Brent Leary: What role has Zia played in the success of Zoho One?

Sridhar Vembu: Zia’s now the layer that is looking at the whole cross-product, cross-database, all of the perspective on bringing, extracting the intelligence out of it.  And we are deepening this further and further.

It started out with first indexing all of that information, building the kind of a graph, connected graph, of that information and now of course running that neural network type of algorithms on it, from a CRM or Desk and all of this sentiment analysis, scoring,  all of these are coming together, more and more.

Building Everything from the Same Foundation

Everything from our grammar checking in Writer, to email spam classification, fraud detection. All this is now powered by the whole Zia foundation now, and we are also exposing all that to the developers. Part of it now is the Zia framework, now built into Creator, and the Deluge frameworks.

So we are exposing this functionality to developers. The Zoho Creator product itself, but there’s more. Orchestly is our business process orchestration engine. Flow is our integration platform, for integrating both Zoho apps and third party apps.  And then we have Sigma, that we launch today for building the extensions on the Zoho platform. Catalyst, which is basically if you want all of these tools, plus you want your custom code, you want to bring any one host on our [platform], alongside your apps, we offer you that.