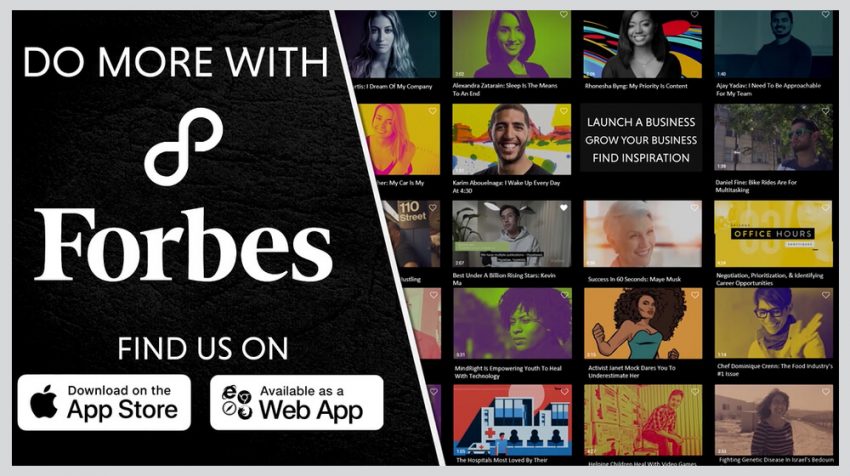 Forbes8 is the on-demand digital video network launched by Forbes. It says it’s an “at-your-fingertips mentor for anyone curious about or engaged in entrepreneurship.”

The app was created in conjunction with global SaaS technology company AW3 Media Group. The portal features over 2,000 videos meant to inspire each stage of an entrepreneur’s journey. Forbes has peppered the app with actionable advice and memorable tales of success and failure. While it was first announced in March, this month saw the debut of a few new original shows on it.

Android users can expect a dedicated app sometime in November, but if you have an iPhone or iPad, there’s no wait. You can download Forbes8 from the App Store right now. And everyone can use the Forbes8 web app after you pick a paid plan, either monthly, weekly, or just for the day. A subscription to Forbes8 isn’t free, but don’t groan. Small Business Trends learned through an email that that also means you won’t see pre-roll or interuptive mid-roll advertising. If you consume a lot of videos but hate ads, do a happy dance. It’s $1.99 for a one-day pass, $5.99 for a week, and $8.99 for a month.

The app will feature distinct themes like Inspire, Launch, Grow and Impact. Ideally, these groupings will align with the different phases, missions, pivots, etc. of a brand. Let’s say you’re a subscriber who’s gathering ideas about a side hustle and you still want to keep your 9-5 job. You’ll have access to the entire Forbes8 library just like every user will, but the app is supposed to steer you toward videos which complement where you currently are in your journey.

And vice versa. If your business has revenue, you’re in a different boat from someone with a pre-traction idea. As such, you’d be able to command the Forbes8 app to surface advanced business videos and other content more germane to your stage.

Forbes8 Isn’t About Hype and Glamour

At the preview event for the new shows, CEO of AW3 Media Group, Amos Winbush III, said Forbes8 isn’t meant to have all the answers. The Forbes8 braintrust is aware of the tendency for many millennials and Gen Z’ers to see moguls like Sir Richard Branson through rose-colored glasses. Ditto for sports stars that are household names, like Serena Williams.

You can watch Branson and Williams on the app, but you can also watch countless others who don’t fall into the titan category, who aren’t internet-famous, etc.

While the often-nauseating zeitgeist of ‘billionaire worship’ developed organically during this decade, some people argue that the Forbes brand had a hand in solidifying the trend. Others disagree, noting that the Forbes universe in 2019 has more diversity compared to 2010. Small Business Trends attended Forbes8’s preview several nights ago, and the films were certainly diverse.

Whatever Forbes valued in the past is in the past, and maybe it should stay there. In all likelihood, diversity is Forbes’ future. With Forbes8, the brand seems to be taking a tempered stance on ‘hype’ by making it a tool to ride sidecar with billionaires if the viewer chooses to.

Sort of like ‘choose your own adventure.’ If learning is your thing, learn. If you prefer to gawk, gawk. But regardless of how you utilize Forbes8, it’s helpful to remember that the subscription isn’t free. On that note, if you’re paying for the highest tier ($8.99 a month), then it would probably make sense to treat it like an investment in education and keep the gawking to a minimum.

In a recent tweet, Forbes said Forbes8 is “committed to helping you make it.” But success is tricky to define, because if you asked ten different people to define success, you’ll probably get ten different answers. The Forbes tweet continues, “We have a responsibility to support entrepreneurship at large.” So, no judgments, just pick what (or who) to focus on. There’s plenty to learn from, and it’s all on-demand.

Titans On The Rocks

One of the new titles, Titans On The Rocks, doesn’t allude to titan-level failure. Rather, it features different titans chatting over drinks in a bar about past and current tips and tricks which led to success. Colby Reed Miller, co-founder and CEO of Miller/Datri Entertainment, the production studio in charge of Titans, said many young people assume big name stars simply walk into a room and immediately “win.”

And when young people lionize people whom they presume have glamorous lives, the vital parts get ignored, namely the far-from-glamorous daily grind of the star’s business. Therefore, one goal of Titans is to have the audience walk away wiser, or internalizing the gritty truth captured on film, so that they ultimately relate to ‘success’ in a more realistic light. Titans is just one series out of many. To get a sense of the broader library (both new shows and older) you can visit Forbes8.Forbes.com.

Attended the @forbes #Forbes8 launch event tonight that gave me an exclusive peek into a new streaming platform & movement designed to support the success of entrepreneurs at every stage of their journey! @forbes8 is launches 10/27. the content there is so helpful + inspiring! pic.twitter.com/xFAY0Y1SZu

Is the Forbes8 App Similar to MasterClass.com?

Comparisons to MasterClass.com have already been made, but pound for pound, MasterClass is roughly 66 percent more expensive than Forbes8 (at the monthly level, at the time of this writing). Surprisingly, some content you’ll see in Forbes8 is licensed from MasterClass, according to Forbes’ Chief Growth Officer Tom Davis.

There’s something for everyone on Forbes8, it seems. Forbes and their tech partners married artificial intelligence and culturally-aware curation with their trove of videos, because as Davis told Business Insider, Forbes was sitting on a lot of video content that wasn’t curated appropriately. Until now. And while we’re on the topic of order, just how orderly will the Forbes8 app be?

Time will tell. We already know some buckets will be presented. They include Inspire, Launch, Grow and Impact. But questions will crop up. It’s a new tool. Are the videos closed-captioned? If so, is AI doing it? Do humans then proofread? Are the Forbes8 videos time-stamped with jump links? Do they have captions? Are they downloadable?

I’m not minimizing the value of the Forbes8 portal by posing questions like these. I’m simply saying that if it’s a great UX, well-indexed, with enhancements people can’t get enough of, etc., then it can have even more potential.

My opinion of it still isn’t final. And I predict that folks with a strong preference for video will try it out. To a lesser degree, I think it could appeal to autodidacts as well.

My favorite piece so far was a panel about the changing face of VC. It features Arlan Hamilton, founder of seed-stage investment fund Backstage Capital. And it’s moderated by Alex Konrad. I’ll attempt to find that specific video again. But I’ll look for it on the Android app, to test Forbes8’s searchability in a few weeks.