Where the Attention Goes, The Energy Flows 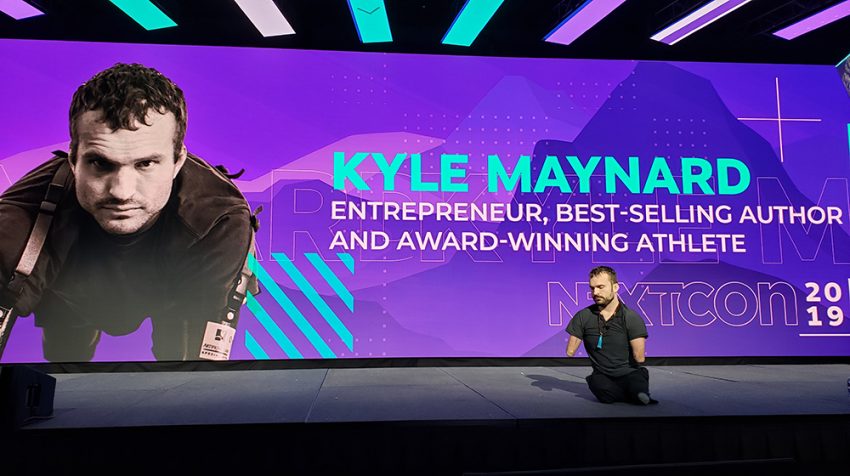 Kyle Maynard literally dragged himself across the stage to give the opening keynote at Nextcon 2019 in Phoenix. And he gave what proved to be one of the most inspiring and motivational keynote talks to a business audience.

Maynard is a quadruple congenital amputee. He was the first quadruple amputee to climb Mt. Kilimanjaro, unassisted. He also climbed Mt. Aconcagua, the highest peak in the Andes Mountains.

For the address to the 1,000-strong crowd at Nextcon, Maynard did not wear prosthetic limbs nor was he in a wheelchair.

It was just Maynard, unplugged, with an inspiring uplifting message as he told his life story and the principles he lives by.

His message: what you achieve in life is based on what you want to achieve. And whether you put your attention on your dreams.

“Where the attention goes, the energy flows,” Maynard said.

His visual presence on stage added weight to his message. The contrast between seeing someone drag himself on shortened limbs across the stage, and imagining him climbing some of the tallest mountains in the world, couldn’t have been more stark. Seeing him, you couldn’t help but think, ‘If he did all of that given his physical limitations, what could I achieve if I tried harder?’

Slow Down to Get Where You Want to Go 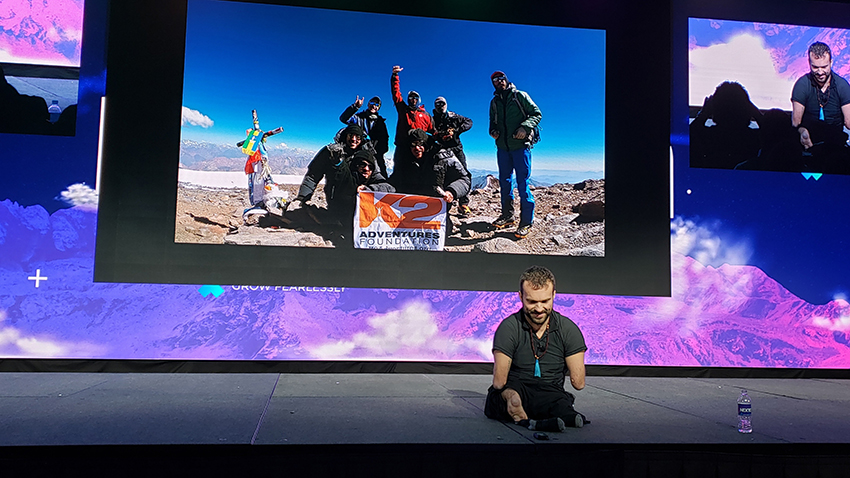 Maynard told the story of climbing Mt. Aconcagua in the Andes, and being told that his friends would have to leave him behind so they could reach the summit before they all had to turn back. The climbing party was running out of daylight.

Maynard was faced with a daunting 800-foot sheer ice wall to scale. While he understood the others’ decision to go on without him, “I felt bad at that moment,” he said.

“When I looked off in the distance I could see my friends already there on the summit and it looked so far away. But then I realized that if I just looked down 3 feet ahead of me, it seemed easier. I could make that 3 feet. And then another 3 feet. And another.”

So with his own guides, he continued toward the summit at his own pace. He kept his head down three feet in front of him at all times, making progress in 3-foot increments.

“And then I remember that moment when my guide, Guillermo, lifted my head up and told me to look. We were just 15 minutes away from the summit. And I made it.”

Maynard added that at times in his life he felt like he was pulled in a million different directions. “I spent so much of my life going as fast as I possibly could, not realizing that I had overlooked many things. If I just slowed down to see where I wanted to go, I could enjoy it more.”

It’s all on where you place your focus, was his point.

He has had to overcome things the rest of us don’t give a second thought to, such as putting on socks.

The first time he tried to put on his own socks, he had to jury rig paper clips to pull them on. It was a 30-minute production at first. Eventually he learned to do it without paper clips. He demonstrated in front of the audience in seconds, using just his arms to deftly put on a sock. “You learn,” he says.

Likewise, he created his own climbing gear. He started with bath towels, then oven mitts, morphing to bicycle tire rubber and duct tape. For him, that worked better than prosthetics.

Support From a ‘Lioness’ Mother 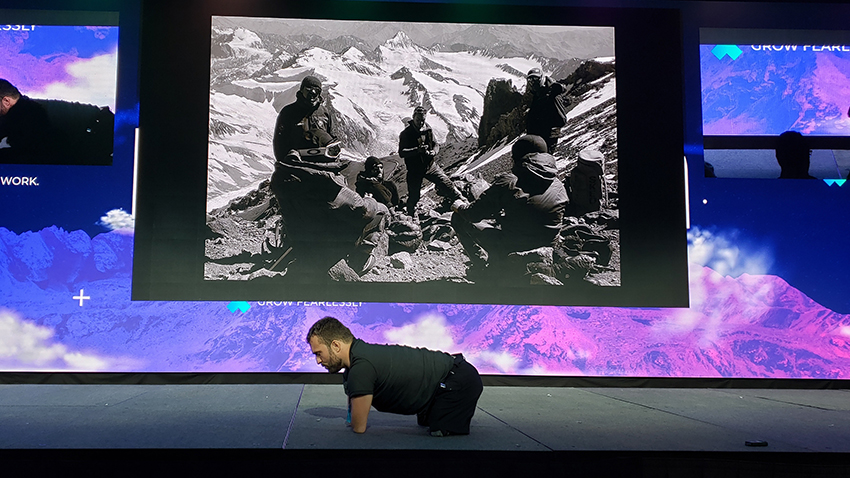 Maynard credits his family with instilling in him the drive to seek adventures and not be limited by his disability.

“I feel lucky in the family I was born into,” he says. He singled out his mother in particular, whom he called a fierce lioness who lovingly protected her cub.  “I couldn’t have gotten luckier to have a mom who fearlessly fought for me at every single stage along the way.”

His grandmother also was a towering figure of support, despite the family not realizing what it would mean to have a special needs child in the beginning. Upon seeing him shortly after his birth with such a severe disability, she told his mother, “You just look at his face, you see a smile, and know that everything will be okay.”

And in time it became true, he added.

In school, Maynard participated in a variety of sports, yet despite losses didn’t give up. “I lost at wrestling 35 times in a row. My parents would not let me quit.”

Today, Maynard has a built a circle of friends he calls his extended family. That circle includes the people he’s come to know from his various mountain climbing and other activities, and the people at K2 Adventures Foundation, the nonprofit he serves on the board of.

“As a kid, I always wanted to go places my wheelchair wouldn’t let me.” He was drawn to K2 because, he said, “I wanted to be part of making experiences accessible for other disabled people.”

He singled out for praise the co-founders of K2 Adventures, Kristen Salcito Sandquist and Kevin Cherilla. K2 led an expedition to Mt. Kilimanjaro that including eight blind people.

He credits the support and love of all of his family and friends with enabling him to live his life to the fullest and not let his disability hold him back from his dreams.

“At the end of the journey there is only one battle you remember. The battle you won getting there.”

Maynard left the audience with this thought, “I challenge you to consider what you want. Focus on it and go for it.”

Nextcon is the annual customer and partner conference for Nextiva. Nextiva is a business communications company headquartered in the Phoenix area.

More images about the event can be found on social channels at the hashtag #Nextcon19.