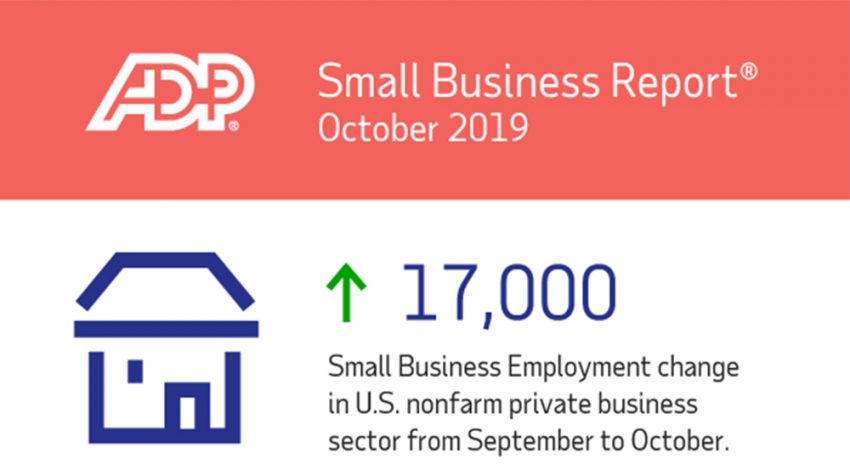 The ADP National Employment Report says private sector employment has increased by 125,000 jobs in October. Even though this number is much lower than the numbers for October 2018, (235,000) the unemployment number is still at a 50-year low.

In the release for the report, Ahu Yildirmaz, vice president and co-head of the ADP Research Institute, highlights the contrasting economic outlook. Yildirmaz says, “While job growth continues to soften, there are certain segments of the labor market that remain strong.” Adding, “The goods producing sector showed weakness; however, the healthcare industry and midsized companies had solid gains.”

It is this contrast that still presents challenges for small business owners when it comes to hiring. With low unemployment rates, owners are having to compete with large companies.

According to the October 2019 ADP Small Business Report, the private small business sector added 17,000 new jobs. These are companies with 1 to 49 employees. While the overall number is positive, it didn’t go well for everyone.

The good news is the service-providing sector managed to create 20,000 jobs in October.

While franchises generally create fewer jobs than other small businesses, this month was different. A total of 30,100 jobs were created by franchises in October across a range of industries.

As usual, restaurants came in with the most number of jobs at 27,600. This was followed by auto parts and dealers at 4,100, and food retailers, business services and real estate all adding 100 jobs each. The one sector which didn’t perform for the month was accommodations with minus 1,000 jobs.

As mentioned earlier the overall employment number for October came in with 125,000. This is dramatically lower than the same time a year ago. But the historic low unemployment number still indicates the economy is strong.

Nationally the service-providing sector is responsible for creating the most jobs in education and health (44,000), trade, transportation and utilities (32,000), and leisure and hospitality (19,000)

The goods-producing sector, on the other hand, didn’t fare well in October with natural resource and mining, construction, and manufacturing all coming it at minus 4,000 jobs.