Author Kathy Morris says you can make a good wage in some cities, but in others, you will be better of working at McDonald’s. The good news is by now most people are well informed as to how much they can make driving for Uber. So, drivers go in knowing this. In most cases, the flexibility to set your own hours is one of the biggest selling points of gig economy jobs.

For small business owners who are looking to hire full-time workers, this type of employment offers multiple benefits. Especially for businesses who are just starting out.

Hiring and keeping full-time workers is one of the more expensive and challenging aspects of running a small business. With the gig economy, small business owners can hire everything from programmers to designers, marketers, drivers, accountants and lawyers to name some of the options.

This means you can budget for your workforce with more precision while you are establishing yourself and scale up or down with demand. And as your business continues to grow and becomes more reliable, you can start hiring full-time workers.

In the report, Zippia looks at cities where it is better and worse to drive for Uber compared to the minimum wage. 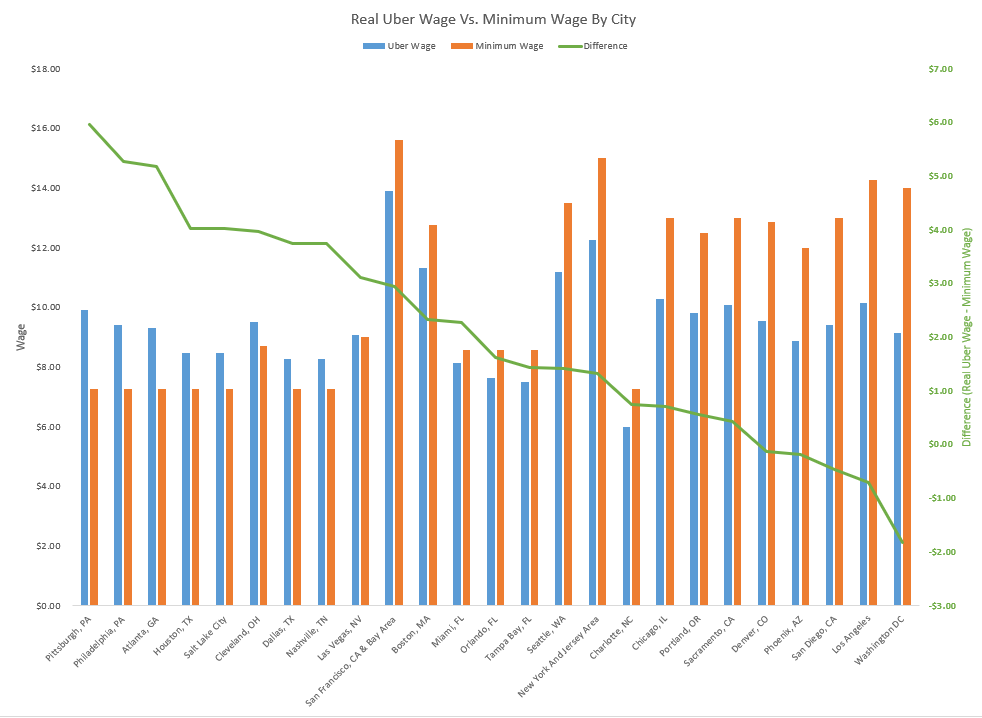 image: Zippia
So, why is one city better over another one? According to Morris, expensive areas where the minimum wage is higher than the federal rate are the worst cities. And cities in states with lower minimum wage are better for Uber drivers.

The location is not the only factor in determining how much Uber drivers ultimately will take home. Equally important are the cost of gas, car depreciation, upkeep and repairs, and self-employment taxes. Therefore, the question is are you better off working at McDonald’s or anywhere else?

The top two cities, Pittsburgh and Philadelphia, are both located in Pennsylvania, where the minimum wage is only $7.25 per hour. So, the $13.20 and $12.52 both cities offer Uber drivers respectively are considerably higher than the minimum wage.

Atlanta also has the same minimum wage as Pennsylvania, and its Uber drivers are making $12.42 per hour. The same goes for Salt Lake City and Houston in terms of minimum wage and their drivers bring in $11.27 per hour for both cities.

Take a look at the graph below for the 25 cities Zippia looked at in the report where Uber drivers make the most and least money.

The gig economy is responsible for creating a new way for people to earn a living doing what was already in the market. Everything from food delivery to taxi drivers, plumbers and dog walkers is now part of this economy.

Whether it is Uber drivers or dog walkers, it is providing great opportunities for entrepreneurs of all sizes and across all industries.