How One Entrepreneur Went from Getting Robbed to Business Success 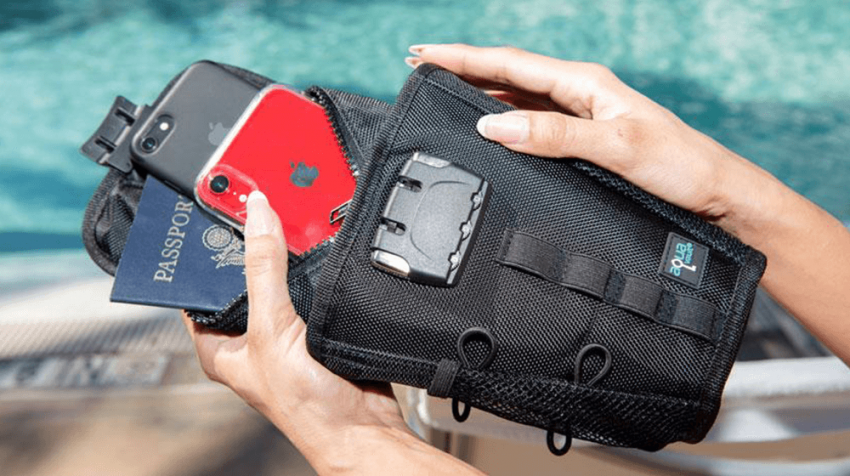 AquaVault is a portable outdoor travel safe that protects your valuables while you swim on vacation. Small Business Trends contacted Jonathan Kinas, Co-Founder/ Managing Partner, Aqua Vault Inc, to learn the story behind this product.

Like a lot of great products, Kinas pointed to the old adage that necessity is the mother of invention.

“We got robbed at the beach,” he writes. “And then invented a product and created a company that got the attention (and investment) of Shark Tank favorite Daymond John.”

Kinas saw a need to solve a similar problem affecting people all around the world on holidays. He enlisted the help of two college buddies and started down the entrepreneurial path that led to AquaVault. His target market was fellow travelers.

“Millions of people a year are robbed while vacationing to the beautiful beaches and pools around the world. Can you imagine the feeling of traveling to another country and having your wallet, phone and passport stolen while you are swimming? It’s a terrible feeling that happens all too often.’

These portable safes attach themselves to lounge chairs, golf carts and anything else like a bicycle or stroller. They are made from ABS thermoplastic which can repel several attempts by thieves. The product has branched out and is now being used at water parks, hotels theme parks, pools and on cruise ships across the globe.

Kinas is an understandably proud entrepreneur.

“Our product line is also being sold in some of the largest retailers including Disney World and Bed Bath and Beyond,” he says. “We went from a small company doing $87,000 our first year to now generating millions a year with a recent 8 figure valuation.”

Kinas’ story should motivate other folks looking to start a small business. He shares their mindset at the beginning.

“We started out without knowing a single thing about the invention process other than we’re going to make a lot of mistakes along the way,” he says.

We knew the landmines were inevitable so all we could hope for was to not land on one big enough that we could not recover.”

Kinas also stressed how having the right team is critical. He felt it was important to have people around them who were smarter than them. And who weren’t afraid to challenge their opinions. That thinking led to action.

There’s one particular strategy that we implemented early on to de-risk our startup,” he says. “That was to reach out to the ten smartest people we knew and encourage their brutally honest criticism. We asked them for their top two reasons they could envision us failing. Then we methodically addressed those concerns with precision.”

He’s got more advice for his fellow entrepreneurs citing talent, discipline and imagination as great assets. If you are sitting on the fence wondering when to get started and waiting for the perfect time, Kinas says it is now.

“There are so many unknown variables that unless you put your blinders on and just get to work, you’ll wind up convincing yourself to back out before you begin,” he says.

“Based on my experience, an entrepreneur is better off to expect the unexpected. They need to be very nimble and embrace the roller coaster they will inevitably experience.”