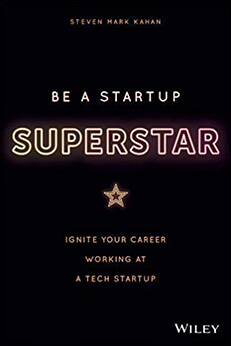 Be A Startup Superstar

High profile startups like WeWork took a beating after their IPO launch failure. But the proliferation of people interested in startups remains a constant. Startup managers seek talent. They remain eager to shepherd new startups to success.

Do you feel you could do the job? Read Be A Startup Superstar – Ignite Your Career Working at a Startup by Steve Kahan first. Kahan brings his professional experiences and resources to bear. And he crafts a book that helps the job seeker entering a startup environment. Kahan filled his book with the right advice and insights. They can aid professionals in making an entrepreneurial transition.

Kahan knows what  he’s talking about. He grew 7 companies in his career. They went from early-stage to reaching over $3 billion in shareholder value. He now serves as CMO at an IT security company in Washington DC.

What Is Be A Startup Superstar About?

Be A Startup Superstar tells about the discipline required to be successful within a tech startup. Tech may seem like a redundant term these days. Technology infuses so many traditional industries. But startups retain a distinct culture. And this dictates how marketplace opportunities get approached. Consequently it also influences the kind of professional experiences sought for a team. Kahan uses Be A Startup Superstar to explain how those experiences play out when you are deciding to work within a startup.

Kahan wrote this book to help others. He wanted them to avoid the challenges he faced. He shares experiences from when he started in the startup tech world. The book divides Kahan’s outlooks and principles into 9 chapters. The first two chapters outline how to pick an opportunity. And the remaining seven address what to do once you are onboard with said startup.

Be A Startup Superstar proves a terrific read. Kahan applies fresh eyes to the ideas that you may have heard before. But he grounds his observations in great experiences, not just clichés. For example, when Kahan writes about goals, he notes three pillars for goals. They include specificity, relevance, and competitive attention. That last pillar refers to how you “pay attention to what the competition is doing and set your goals in relation to their actions.”

What I liked about Be A Startup Superstar

Kahan strives to show you the ropes. You need to learn these lessons to join a startup environment and thrive. It doesn’t matter whether you decide you want to more flexibility in your management or aim for executive responsibility. A whole chapter, Act Like A Leader (Even If You Don’t Have The Title Yet) covers several core tenets. They include setting goals that go beyond inspiration.

“To succeed you can’t just focus on your own personal goals. Even when you’re just starting out, it’s better to be seen as a person who helps to ensure that the project, team, and workplace goals are clear and inspiring.”

Kahan intends many of his insights to demonstrate the kinds of daily activities that make a startup professional effective. You need that perspective. Daily entrepreneurship priorities remain murkier than those in a corporate environment. For example, check out  how Kahan contrasts roles at startups with those at more traditional companies.

“Most jobs in big, old-school companies offer a limited range of authority, meaning no single individual, besides perhaps the CEO, has the ability to influence the entire company in a significant way. When you get hired to fill a role at an established business, that’s exactly what they expect you to do: fill that role. ”

Kahan presents this as a stark contrast to the culture in the average startup. He also advocates for an unconventional approach to career development in a startup. He advises not to “wait around for a mentor to select you. Be proactive about it.”

What I would have Liked to See More Of

I wish the book had covered more about how financial considerations of a startup impact career options. For example, Kahan warns not to accept stock options over a livable salary. He also mentions when to stay or leave a startup. Still more examples of distinguishing between financial startup “blips” versus serious structural problems in a startup would have been great. These issues can trigger a faster collapse these days compared to financially troubled corporations.

But because it is aimed at career management, Be A Startup Superstar contains enough spot-on advice about being proactive to outweigh my topic wish. Being proactive on company conditions, similar to the team efforts Kahan outlines, helps to pick the right startup to flourish in. If you pair this book with Venture Capital Investing by David Gladstone, you would have a powerful two-book bible for managing a career in the startup world.

Read Be A Startup Superstar and learn how to make your career take-off faster than a startup IPO.