What Are the Oldest Companies in the World? 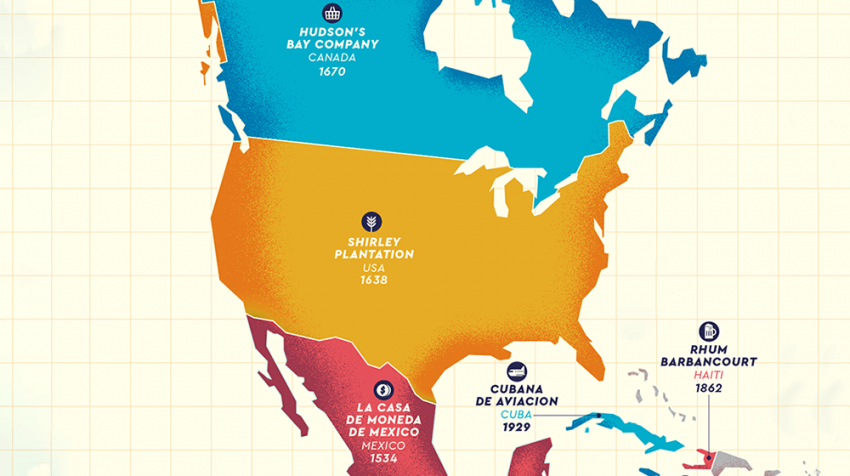 When entrepreneurs start a business, their goal is for it to keep running forever. With that in mind, have you ever wondered about the oldest company in the world? A new and incredible infographic (with some great graphics) from Businessfinancing.co.UK thoroughly answers that question.

If you say the oldest company is 100, 200, 500, or even 1,000 years old, you would still be short by another 400+ years. The Kongo Gumi construction company in Japan has been in business since 578. That is 1,428 years! In 2006 it became a subsidiary of Takamatsu and part of the new company it formed called Kongogumi Engineering.

Do you think your business can last that long? Before you say no, Kongo Gumi is a company established by Korean immigrant builder Shigemitsu Kongo to construct Japan’s first government temple. Granted he was a renowned temple builder, but if you deliver quality with each customer order, there is no reason why you can’t.

For small business owners who are just starting, the lesson to be learned is to deliver quality work your customers will see value in. After all, Shigemitsu Kongo was technically a small business owner. But what is the key to the longevity and staying power of the companies in this report?

Take a look at any company that has been around for some time and you will see one common thread, quality. Companies that deliver quality have a much better chance to keep their business going.

It takes more than quality but having a quality product or service drives the growth and staying power of a company. And if your brand is recognized for quality, you’ve won half the battle. Beyond quality and brand recognition, you have to adapt and evolve with the times.

Whether it is creating a website, social media channels, or chatbots, businesses that adopt the technology of the time can introduce their quality product to new customers as time moves on.

The Oldest Companies in the World

In this particular report, North America includes the U.S., Canada, and Mexico as well as the rest of Central American and Caribbean countries. And the honor for the oldest company goes to Mexico’s La Casa de Moneda de México. A mint established in 1534 in Mexico

In the U.S. the oldest continuously running a business is the Shirley Plantation. Even though the plantation dates back to 1613, it wasn’t open for business until 1638. To this day the descendants manage the land and business.

In the Caribbean, Mount Gay Rum was established in 1703. 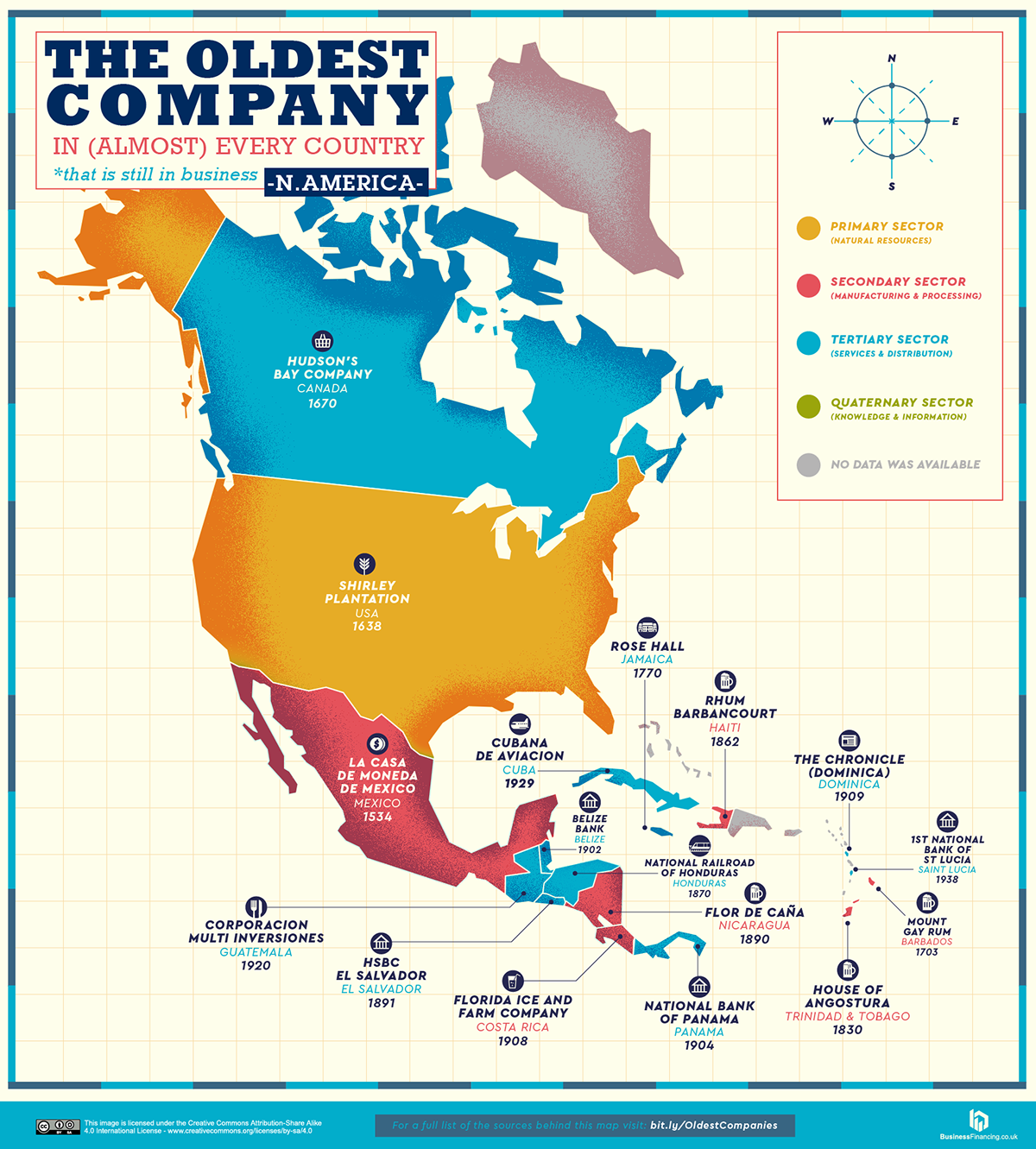 The old continent or Europe has many companies that are centuries old. And the oldest one happens to be an eatery that has been rumored to have served the like of Christopher Columbus, Johann Georg Faust, and Wolfgang Amadeus Mozart. Established in 803 St. Peter Stifts Kulinarium remains the oldest restaurant in Europe you can still have a meal in.

The Royal Mint of England (886), the Staffelter Hof Winery (862), and Monnaie De Paris (mint 864) were all established in the same century. 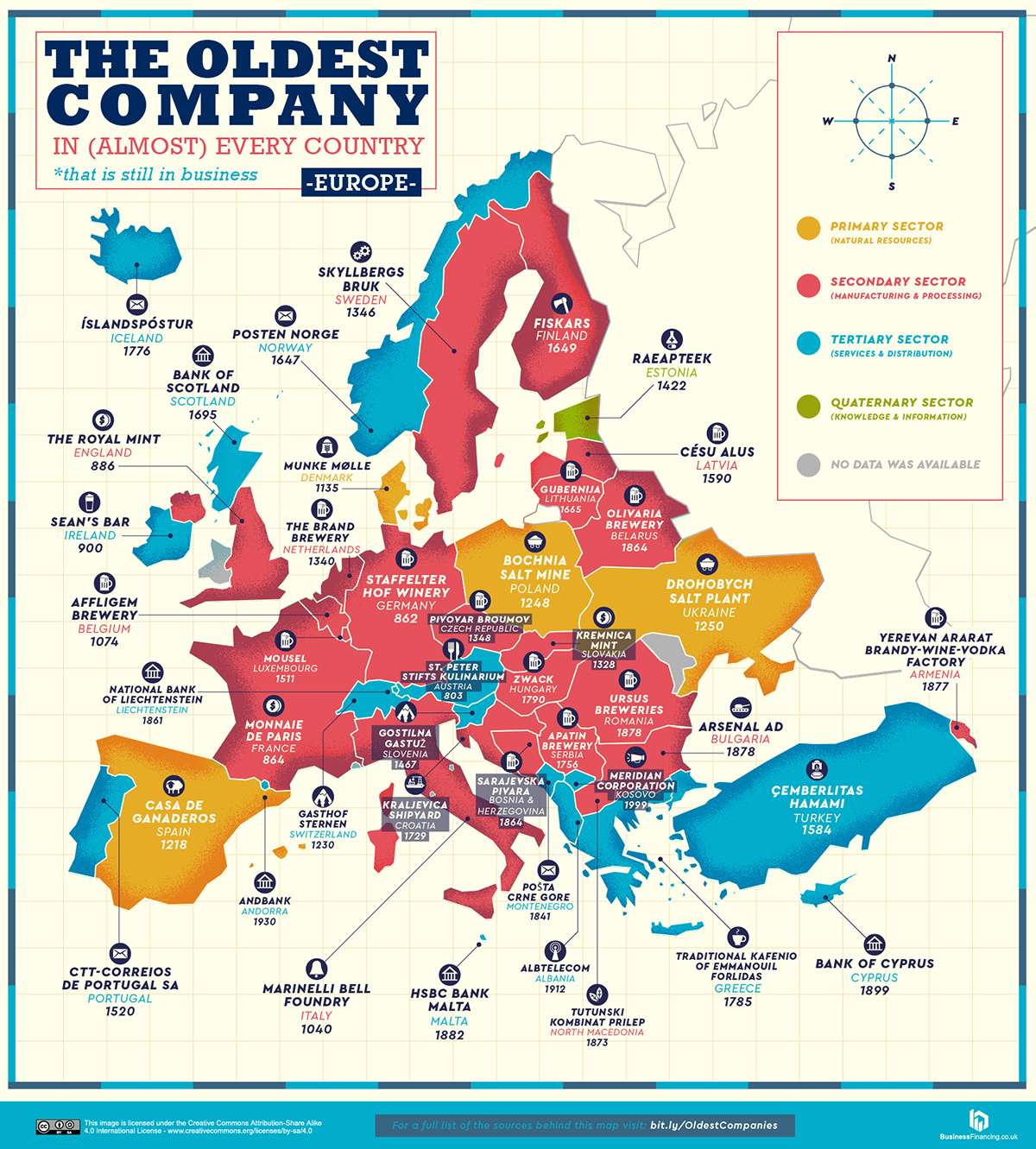 The oldest companies in South America are mints in Peru, Colombia and Brazil established in 1565, 1621, and 1694 respectively. 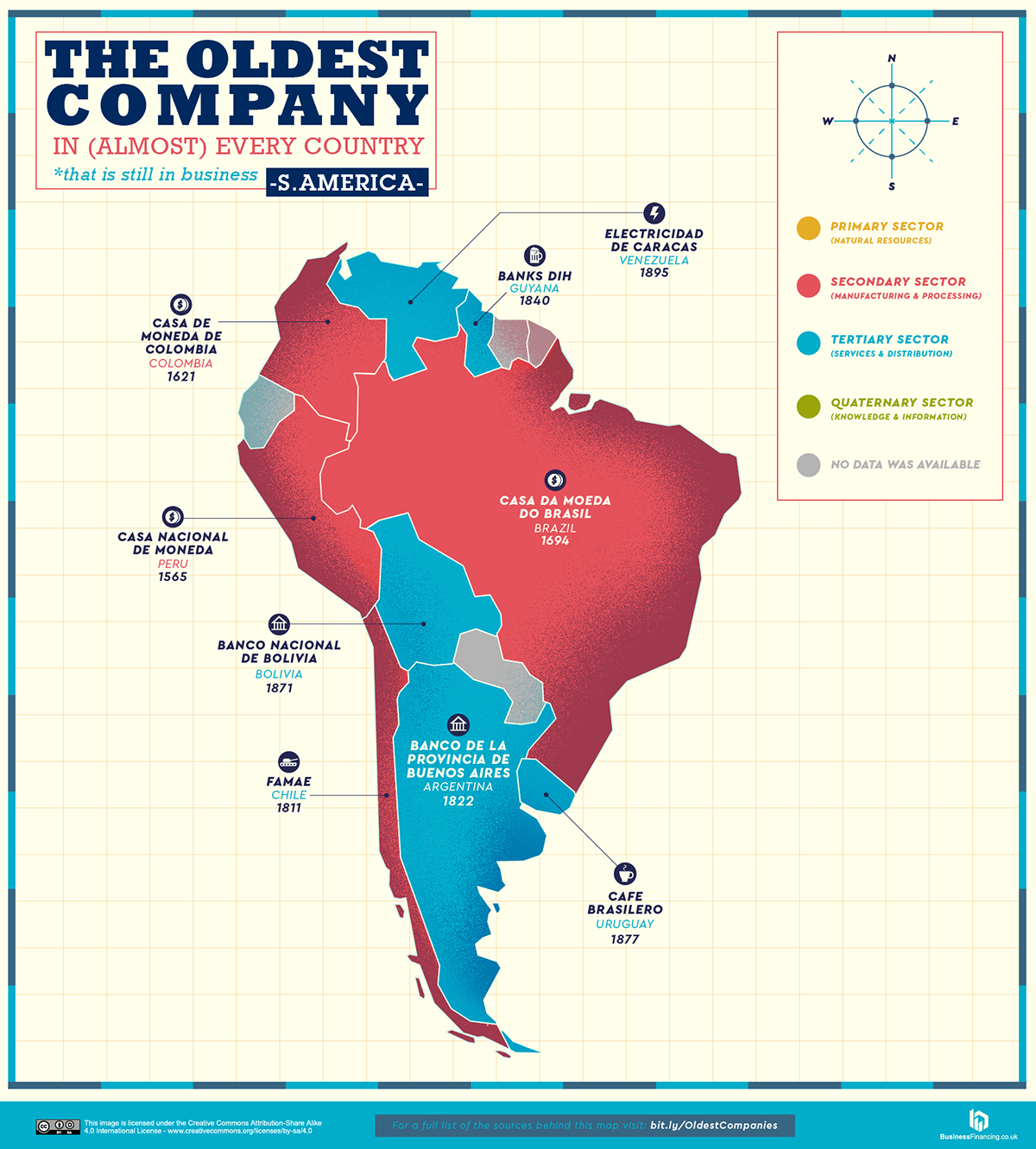 In addition to Kongo Gumi, Ma Yu Ching’s Bucket Chicken House is also several centuries old. At more than 850 years old, it is one of the oldest restaurants in the world.

The next business comes in almost 600 years after the chicken house. The Petrodvorets Watch Factory in Russia was established in 1721, this is followed by the Wadia Group of India in 1736. 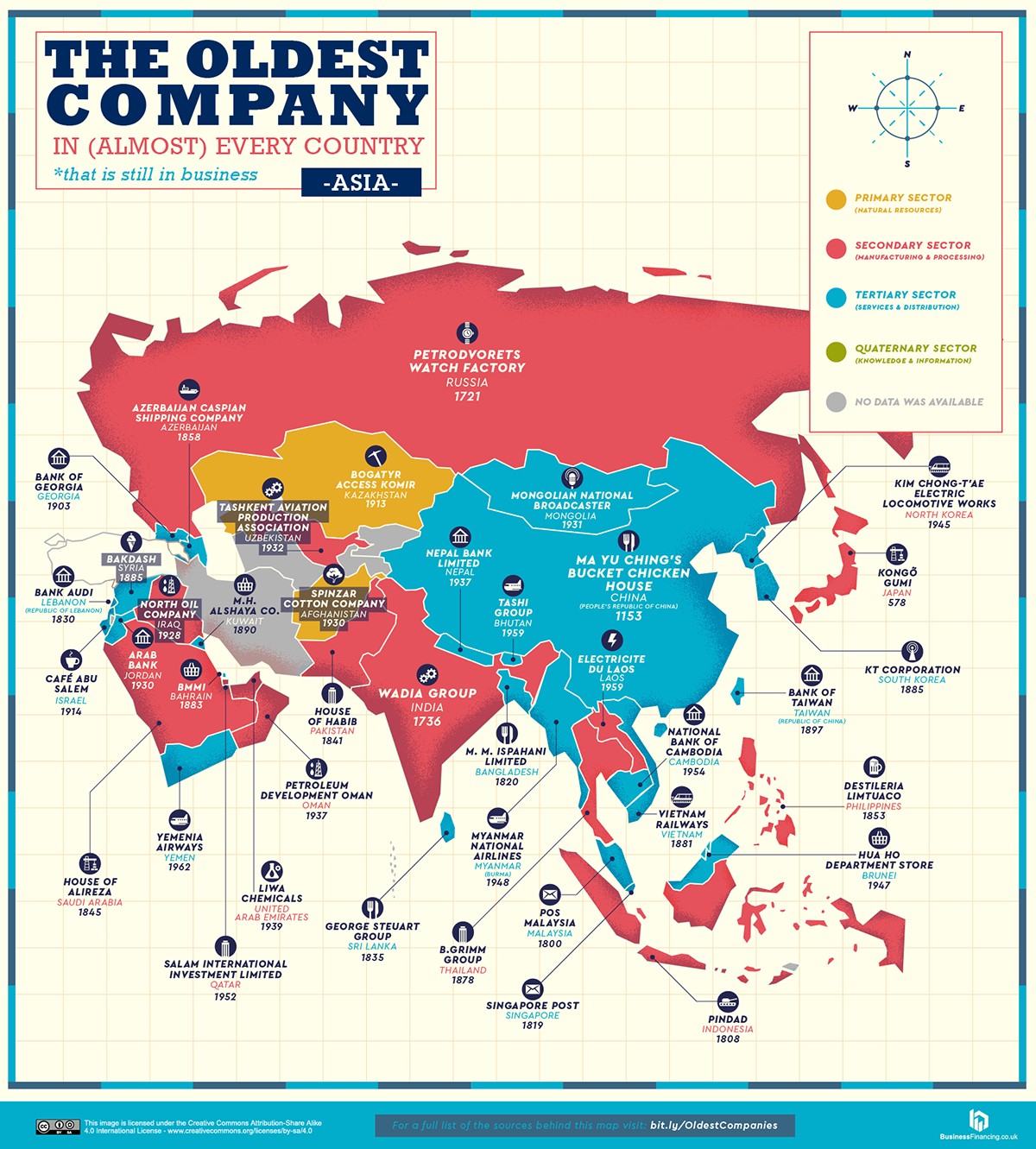 The oldest business in Africa is the Mauritius Post established in 1772. Railways, banks and post offices make up the other entities established in Africa during the 18th and 19th centuries. 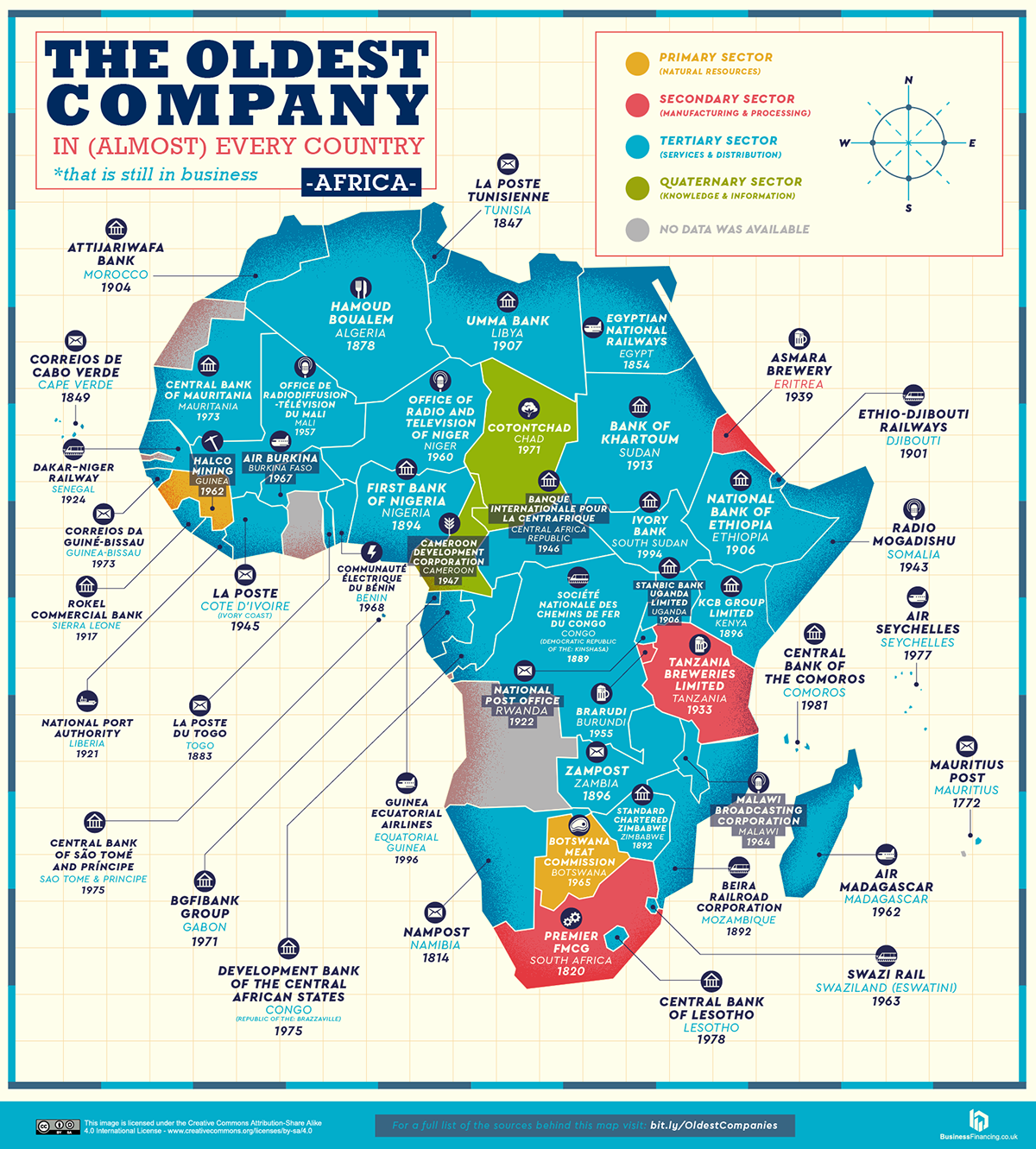 There are only two entries in Oceania and they come courtesy of Australia and New Zealand. The Australia Post was established in 1809 and the Bank of New Zealand in 1861. 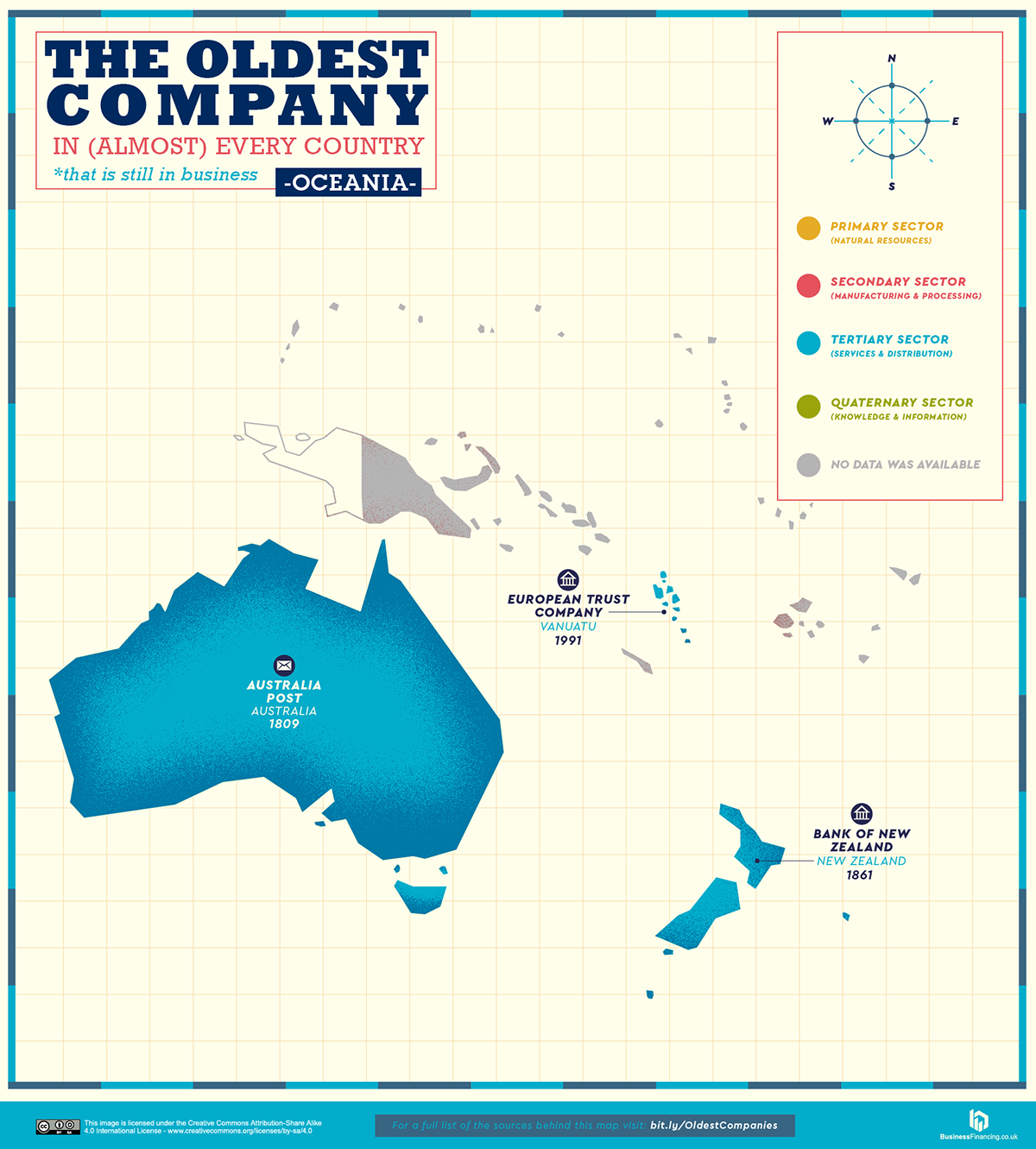 You can find the full research for the infographics here.